Bencho! An App By IITians For The Delhi Janta Catering To The Inappropriate

Bencho! An App By IITians For The Delhi Janta Catering To The Inappropriate 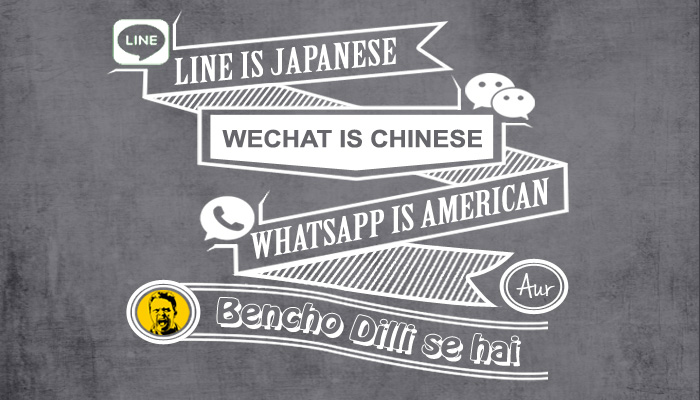 The last few years has seen a dramatic rise of usage of crass north Indian language or a parody on it, especially in our popular culture. Who wouldn’t remember the song DK Bose from ‘Delhi Belly’ that almost became an anthem for youngsters. With the advent of social satire websites and podcasts, parody on North Indian cuss words became a genre in itself.

Take the example of AIB (All India Bakchod). These have started a candid, on-your-face humour revolution in the country by being inappropriate through their YouTube Channel and online sketches. We have already seen enough North-Indian influenced humour in films – Fukrey and Pyaar ka Punchnama are a few titles that come to mind. But, there was nothing from this genre in the world of mobile applications that lets you talk north-Indian humor on a day-to-day basis. It was only a matter of time before somebody would come out with an application to fill this void. An app christened ‘Bencho‘ is the first of its kind app-on-the-block that’s come out catering to the inappropriate and sometimes scandalous humor in the Delhi lingo market. Developed by a group of local indie developers, not willing to come forward, the app depicts everyday life from a Delhite’s point-of-view.

“We are a startup by IITians with good experience in corporate. However, we would want you to keep the app anonymous. I hope you will understand that,” says the founder.

The app has humor around day-to-day news, usually the ones that trend on other social platforms such as Twitter. Bencho seems to be targeted at people who find social media platforms like Twitter too intimidating, as users can collate the best of north Indian humor from Twitter and other sources, while creating its original humor in the form of Breaking News. The app kills two birds with a stone – it updates you with breaking news and more importantly, in everyday language and lingos and of course with a dose of humor.

The app has taken a leaf out of a rather bizarre worldwide sensation called ‘Yo’, which allows you to send a YO to your friends. Since ‘Bencho’ is a North Indian targeted app, it has a collection of nine beeps, aka common phrases Delhites say to each other with Bencho thrown in. The users can send these beeps as an audio to their friends. Some of the beeps can get a little embarrassing if received with your parents or boss around. But, then that’s the biggest selling point of this app – the inappropriateness. In fact, in its next update the app will crowd-source these beeps where users can record their own beeps around Bencho, and share it with friends.

User-generated content is yet another thing which is a significant part of this application. Bencho encourages users to create their own humor, along with a photograph and post on the common feed, visible to all. The best part it one can share explicit humor, sans obscenity, on the application anonymously. Just the way Secret keeps the one who is posting and the one who is commenting as anonymous.

Another interesting feature of the app is that it prompts users to share humor cards from the app with their Whatsapp groups and Twitter circles. Not surprisingly, the application has managed 1000+ downloads in just under a month without any direct marketing. Surprisingly, its users are spread all over the country despite of the fact that it was primarily targeting the youth from North India to begin with. Besides Delhi and Chandigarh, Maharashtra, West Bengal and Karnataka feature in top 5 states. Around 20% of its users are females. The app is adding around 100 users per day on average without any marketing; in fact, it spread only via word-of-mouth, or rather, in this application’s case, word-of-beeps.

While, the founders have no plans to monetize the app anytime soon, they are trying to build a perfect network of news, humor, inappropriateness and north-Indian lingo thrown in before they figure out the funding.

In the future, the team behind the app is working on a version that will enable users to upload their short funny videos on the app. It will look more like YouTube, Twitter and Facebook all-in-one with Breaking News, Delhi humor and anonymity in equal measures.

As of now, the app is available only for Android, available here. “The app isn’t available on Apple store yet but that’s on cards,” said the founder.

What do you think about the Bencho App, will you send a Bencho to your friends?