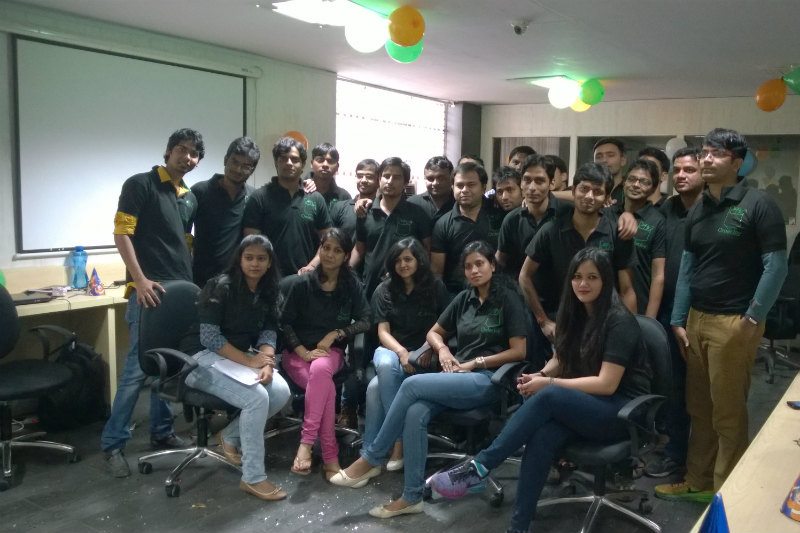 Facebook’s controversial Free Basics programme has hogged the maximum attention for trying to solve the problem of low level of Internet penetration in emerging countries. Yet it is not the only one which has thought about it.

One such firm is Gurgaon-based Adstuck which took upon itself to solve the problem serendipitously. While working on an augmented reality product – a browser that identified the things one is trying to find and exploring use cases for it, the founders realised that for such a product to do well in India, the challenge is not the number of smartphone users but rather the recurring cost of Internet.

Thus, the founders Abhishek Shankar, Kundan Kumar, and Ritesh Malik hit upon the idea to develop a reverse data platform – where brands would reimburse the data of users for using their apps and give some more for future retention. The idea stemmed on the back of some hard statistics – even though the number of smartphone users totalled 350 Mn, only 80 Mn of them were active subscribers of a 3G connection on account of expensive data plans. Added to that was the fact that broadband infrastructure is quite broken and inadequate. Similarly, brands were spending billions of dollars in advertising and on mobile to acquire customers, something which could have been brought down by almost 3 times using Reverse Data platforms.

As per estimates, out of the approximately 7.1 Bn people worldwide, there are still 4.2 Bn non-Internet users, mainly in developing markets. Though, as per forecasts, some 500 Mn to 900 Mn more individuals will gain access to the Internet by 2017,  but they still won’t be able to afford it fully. For instance, in Mexico, 42 hours of work can give earn them one hour of Internet and in India three hours of work can earn them the same. So even with a $15 Android phone and all the apps therein, affordability remains an issue for the masses.

These are the challenges Adstuck wants to fight. The idea is to provide free Internet access and connectivity to two-thirds of the world, without taxing the masses or the overburdened government or by forcing telecom operators to lower prices. It is this gap in emerging markets which the 32-member team, based out of Gurgaon, is aiming to address.

Targeting the problems of expensive data for users, internet affordability in a developing country  and retention costs of brands, the reverse data technology strives to mediate between the user and brand by making brands reward user with data for browsing through their apps or websites. So, once the user downloads and starts using any of the interface apps which Adstuck has partnered with or owns, for instance Mojo, Free Talktime, Earn Talktime, Idea Free Recharge, RaccoonFinger, and others, they are rewarded with a certain amount of data they have exhausted or free recharges or payouts. The data which is reimbursed can be used for anything from surfing to buying, as it is totally unrestricted data.

While the startup itself owns over 20 apps, it has partnered with over 100 apps that use reverse data technology to give user the data back. Additionally, it will now also be preinstalled in certain Android phones. Brands like Lemon and Lava have already launched a number of models with reverse data as a standard feature, and such partnerships with more brands are soon expected to materialise.

The following video illustrates how one such app (Mojo) functions and rewards its users.

Brands, on the other hand, benefit in the form of slashing cost of acquiring customers by 1/3rd and retaining customers by almost four times the normal duration when compared to relying on Google, Facebook, and other channels. Given the fact that about 200 Mn people use Adblocker, which means a lot of ad money is wasted, the startup aims to mediate between the two so that brands reimburses user’s data for using their apps or watching relevant content or becoming influencers for websites.

As per Abhishek, every person who finds 3G data costly is an ideal audience for them. Any person who buys a smartphone will obviously buy 2G/3G data as a next step. Hence, the startup has a wide pool of audience waiting to be tapped. It is obvious that post paid users will not feel the pinch of the cost of data as compared to prepaid users. Currently, an urban user consumes, on an average, about 760MB of data in a month, which is expected to rise to 2.25GB data in 2018.

Adstuck has tied up with 548 telecom operators globally, buying data in bulk from them and then giving it to users for trying varied apps or surfing web. Till date, it has distributed 150 Mn MB of data to 3.8 Mn users through its third party apps and sites. The startup has a monthly active user base of 1.75 Mn users and aims to reach over 1 Bn people in 29 countries by 2020. On a daily basis, about 20k users use it to access their favourite sites and apps without spending on data. 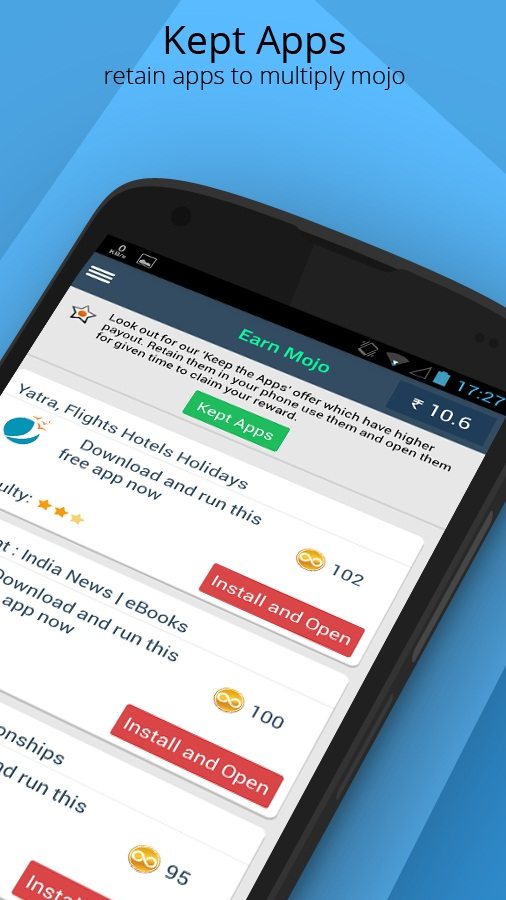 The startup has tied up with 900 brands globally. These include Facebook, Amazon, Flipkart, and OLX, among 150 others. So, everytime a user uses free Internet, it receives 30% of that value as operating profit. Hence, brands pay it through a self serve prepaid model. Adstuck is thus clocking 20% MoM growth in earnings. Consequently, it aims to raise $1 Mn in revenues in FY 2015-16.

Adstuck has been seed funded to the tune of $600K by Project Guerilla in 2013. As it chases expansion of its user base, it is looking out to raise more funding. Additionally, it has also opened business offices in Bay Area and Singapore.

The Other Data Apps

While the concept of free Internet in developing nations is not new (thanks to Facebook’s controversial Free Basics and Airtel Zero), there are quite a few firms which are doing so while leveraging the power of brands and apps. Globally, there is Jana, a mobile advertising platform, which aims to bring free Internet to 1 Bn people in emerging markets by 2020. Users of Jana’s mobile app mCent earn free mobile data for trying out sponsored apps. Jana already has more than 40 Mn users in places like India, Nigeria, and Brazil. The company has partnered with 311 mobile carriers in more than 93 countries for mobile web initiatives.

Then there is Gigato, an app loyalty programme, which reimburses data by allowing the app developers to sponsor the data for their end users and the reimbursed data can be used anywhere in an unrestricted manner. 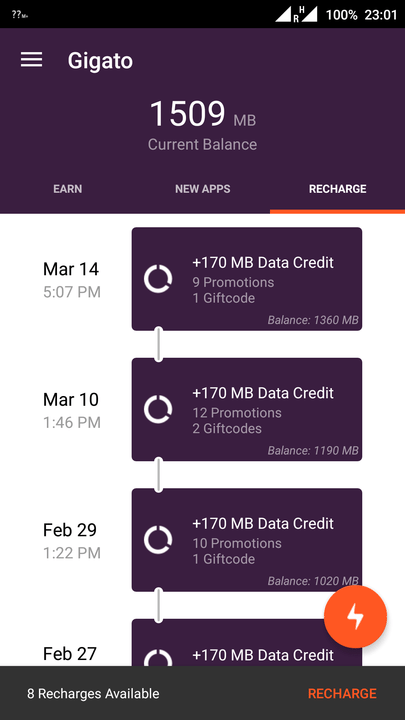 Gurgaon based Planet Gogo also does something similar, rewarding users with free talk time for consuming content or even unlocking their phone. ‘GoGo points’ enables users to redeem talk time from their mobile operator by using the accumulated points. The company has partnered with telecom operators such as Airtel and Vodafone.

Adstuck however aims to differentiate itself from the competition through its functionality. So, while Airtel Zero is only specific to Airtel customers, Adstuck’s reverse data platform is open to all telcos. While Jana is only focused on mobile application, Adstuck is also leveraging the mobile desktop browsers for the same. The idea is to give people control to make money by watching ads. Though, of course, Abhishek concurs that maximum usage would be on mobiles.

A 2009 research by the World Bank had found that for every 10% increase in number of high-speed Internet connections in developing countries, there was an increase of 1.3% in economic growth. The same statistics were also touted by Facebook’s founder Mark Zuckerberg when he was in India to push his Free Basics agenda and bring a billion more people online. Just like Zuckerberg, Adstuck also has the same goals, to reach 1 billion people in emerging markets in the next 8 quarters. However, their approach is in stark contrast to that of Facebook’s.

But, like Adstuck, their competitors are also tapping the power of brands to enable Internet access to the masses. So, differentiation becomes a crucial factor here. A billion people will directly come online through their smartphones rather than PCs. So, mobile is going to be the battleground for all players, and it is here where Adstuck will need to prove its mettle.