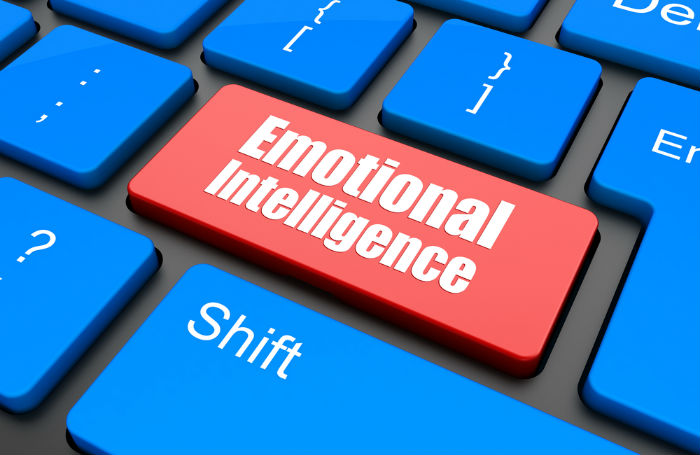 When emotional intelligence (EQ) first appeared to the masses, it served as the missing link in a peculiar finding: people with average IQs outperform those with the highest IQs 70% of the time. This anomaly threw a massive wrench into the broadly held assumption that IQ was the sole source of success.

“No doubt emotional intelligence is more rare than book smarts, but my experience says it is actually more important in the making of a leader. You just can’t ignore it.” – Jack Welch

Emotional intelligence is the “something” in each of us that is a bit intangible. It affects how we manage behaviour, navigate social complexities, and make personal decisions to achieve positive results.

Despite the significance of EQ, its intangible nature makes it very difficult to know how much you have and what you can do to improve if you’re lacking. You can always take a scientifically validated test, such as the one that comes with the Emotional Intelligence 2.0 book.

Unfortunately, quality (scientifically valid) EQ tests aren’t free. So, I’ve analysed the data from the million-plus people TalentSmart has tested in order to identify the behaviors that are the hallmarks of a low EQ. These are the behaviours that you want to eliminate from your repertoire.

You Get Stressed Easily

When you stuff your feelings, they quickly build into the uncomfortable sensations of tension, stress, and anxiety. Unaddressed emotions strain the mind and body. Your emotional intelligence skills help make stress more manageable by enabling you to spot and tackle tough situations before things escalate.

People who fail to use their emotional intelligence skills are more likely to turn to other, less effective means of managing their mood. They are twice as likely to experience anxiety, depression, substance abuse, and even thoughts of suicide.

You Have Difficulty Asserting Yourself

People with high EQs balance good manners, empathy, and kindness with the ability to assert themselves and establish boundaries. This tactful combination is ideal for handling conflict. When most people are crossed, they default to passive or aggressive behaviour. Emotionally intelligent people remain balanced and assertive by steering themselves away from unfiltered emotional reactions. This enables them to neutralise difficult and toxic people without creating enemies.

You Have A Limited Emotional Vocabulary

All people experience emotions, but it is a select few who can accurately identify them as they occur. Our research shows that only 36% of people can do this, which is problematic because unlabeled emotions often go misunderstood, which leads to irrational choices and counterproductive actions. People with high EQs master their emotions because they understand them, and they use an extensive vocabulary of feelings to do so.

While many people might describe themselves as simply feeling “bad,” emotionally intelligent people can pinpoint whether they feel “irritable,” “frustrated,” “downtrodden,” or “anxious.” The more specific your word choice, the better insight you have into exactly how you are feeling, what caused it, and what you should do about it.

You Make Assumptions Quickly And Defend Them Vehemently

People who lack EQ form an opinion quickly and then succumb to confirmation bias, meaning they gather evidence that supports their opinion and ignore any evidence to the contrary. More often than not, they argue, ad nauseam, to support it. This is especially dangerous for leaders, as their under-thought-out ideas become the entire team’s strategy.

Emotionally intelligent people let their thoughts marinate, because they know that initial reactions are driven by emotions. They give their thoughts time to develop and consider the possible consequences and counter-arguments. Then, they communicate their developed idea in the most effective way possible, taking into account the needs and opinions of their audience.

The negative emotions that come with holding on to a grudge are actually a stress response. Just thinking about the event sends your body into fight-or-flight mode, a survival mechanism that forces you to stand up and fight or run for the hills when faced with a threat. When a threat is imminent, this reaction is essential to your survival, but when a threat is ancient history, holding on to that stress wreaks havoc on your body and can have devastating health consequences over time.

In fact, researchers at Emory University have shown that holding on to stress contributes to high blood pressure and heart disease. Holding on to a grudge means you’re holding on to stress, and emotionally intelligent people know to avoid this at all costs. Letting go of a grudge not only makes you feel better now but can also improve your health.

You Don’t Let Go Of Mistakes

Emotionally intelligent people distance themselves from their mistakes, but they do so without forgetting them. By keeping their mistakes at a safe distance, yet still handy enough to refer to, they are able to adapt and adjust for future success. It takes refined self-awareness to walk this tightrope between dwelling and remembering.

Dwelling too long on your mistakes makes you anxious and gun shy, while forgetting about them completely makes you bound to repeat them. The key to balance lies in your ability to transform failures into nuggets of improvement. This creates the tendency to get right back up every time you fall down.

When you lack emotional intelligence, it’s hard to understand how you come across to others. You feel misunderstood because you don’t deliver your message in a way that people can understand. Even with practice, emotionally intelligent people know that they don’t communicate every idea perfectly. They catch on when people don’t understand what they are saying, adjust their approach, and re-communicate their idea in a way that can be understood.

You Don’t Know Your Triggers

You Don’t Get Angry

Emotional intelligence is not about being nice; it’s about managing your emotions to achieve the best possible outcomes. Sometimes this means showing people that you’re upset, sad, or frustrated. Constantly masking your emotions with happiness and positivity isn’t genuine or productive. Emotionally intelligent people employ negative and positive emotions intentionally in the appropriate situations.

Emotions come from within. It’s tempting to attribute how you feel to the actions of others, but you must take responsibility for your emotions. No one can make you feel anything that you don’t want to. Thinking otherwise only holds you back.

If you have a firm grasp of who you are, it’s difficult for someone to say or do something that gets your goat. Emotionally intelligent people are self-confident and open-minded, which create a pretty thick skin. You may even poke fun at yourself or let other people make jokes about you because you are able to mentally draw the line between humour and degradation.

Unlike your IQ, your EQ is highly malleable. As you train your brain by repeatedly practising new emotionally intelligent behaviours, it builds the pathways needed to make them into habits. As your brain reinforces the use of these new behaviours, the connections supporting old, destructive behaviours die off. Before long, you begin responding to your surroundings with emotional intelligence without even having to think about it.