To Jio Or Not To Jio: Twitter Hands Out The Verdict

To Jio Or Not To Jio: Twitter Hands Out The Verdict

After its success in chemicals and oil and the gas space, the juggernaut called Reliance has carved a path for growth through its most ambitious undertaking – Reliance Jio. Jio’s entry has been a major disruptive force in the Indian telecommunications industry. Reliance is rewriting the rules of the game. Its strategy of charging low rates and getting majority of the Indian consumers on its network is unprecedented. It is almost safe to say that the introduction of Jio triggered the process of digitalization followed by currency demonetisation.

Reliance’s stock has jumped 30% since the introduction of Jio prime offer during February 2017. The initial response looks good, however we would say that the jury is still out whether Jio as a business has succeeded as a business.

They say that if you aim for perfect, you are chasing a moving target. While Jio’s initial signs look promising, we also noticed some chinks in its armour. There have been reports of call drops and other network issues. In the digital age, people actively express their opinion on social media and leave a trail of valuable data that can be analysed to uncover hidden insights. We deployed cutting edge AI technology to analyse what is the collective opinion of the people (based on 140K tweets) regarding Reliance Jio.

To counter this, we first did an intent analysis to weed out all the marketing (23%), news (13%) and non classifiable random tweets to just focus on opinion related tweets (56% of total). Of the opinion related tweets, the sentiment was 47% positive and 30% negative. We would rate it as good but not great. Offering 30GB of data at INR 300 per month is unprecedented and was expected to have generated a huge cheer on social media. However, some people were bound to get disappointed by discontinuation of freebies. 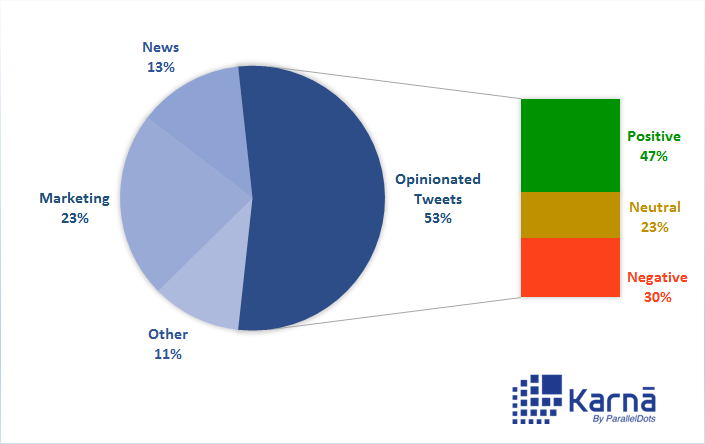 Overall opinion related to Jio was positive, but not by a wide margin

The AI algorithms also classify the tweets on the basis of the emotions behind them.

Tweets classified on the basis of emotions

The major emotion is positive attributed to happy and excited. While a significant amount of people seem angry (may be not too thrilled about the end of Jio freebies).

Like most of the other hot- shot brands, Jio also had some fake accounts in action. Some of them trying to make the topic trend and contributing to fake news. The key hypothesis is that spammers can be effectively identified if we look at all the tweets about a topic and figure out the tweets that are contextually very close to each other, made in a very short span of time (~15 minutes). For this, a text analytics algorithm called Semantic Similarity is used for clustering contextually similar tweets. Here are some of the fake accounts for Jio. Some of these have been deleted and don’t appear in the search results as they were classified as spammers by Twitter as well. 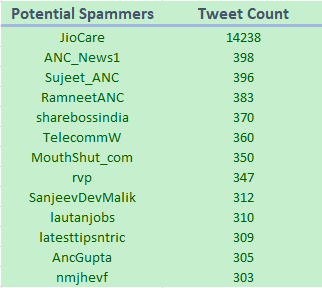 It is important to note that the user ‘@JioCare’ is the customer support handle for Reliance Jio. It is categorised as a potential spammer by the model because of its standard replies to user queries.

Here is a snippet of spamming in action, promoting Jio. 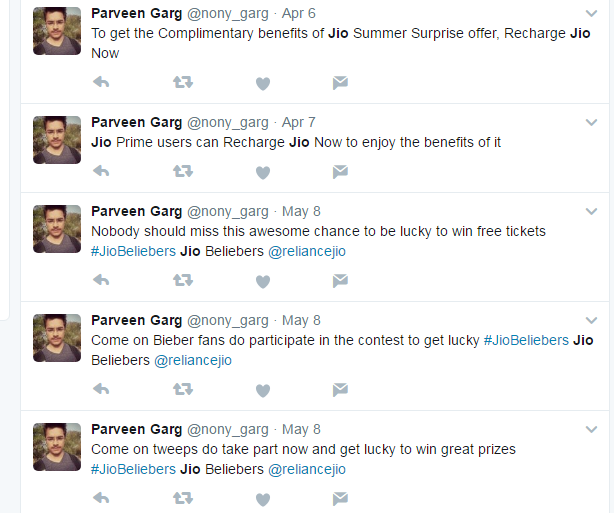 You can check out how these users are turning spamming into account in the links below.

After weeding out the irrelevant tweets, we ran sentiment analysis on the opinion driven tweets only. The following stack chart contains the filtered sentiment analysis statistics for Jio’s key features. The feature with the most positive sentiment is speed and the one with the largest upset a audience is voice. 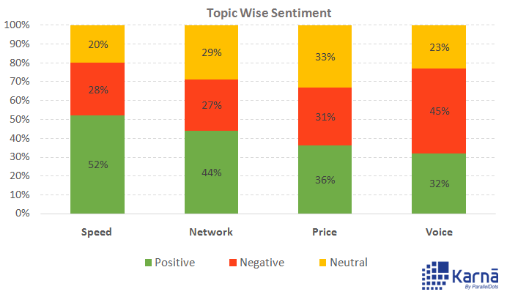 According to the chart, the majority sentiment is positive. However, there is a significant amount of users complaining about the speed. Take a look at the adjective cloud of the speed. Words like slow, dead, chargeable and worthless have also been used to describe the speed. 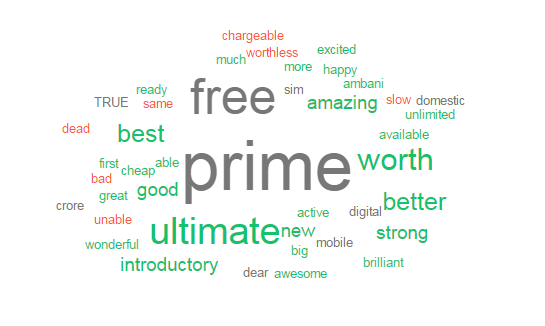 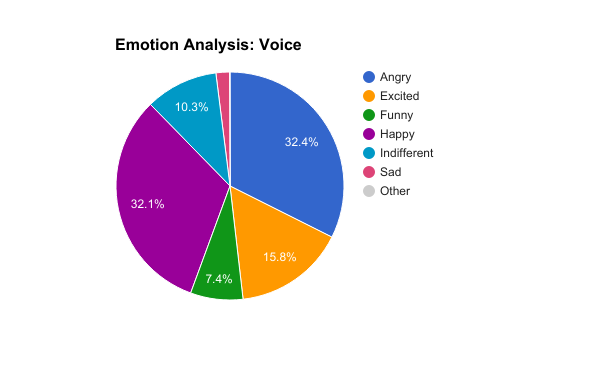 Emotion and sentiment breakdown for “voice” 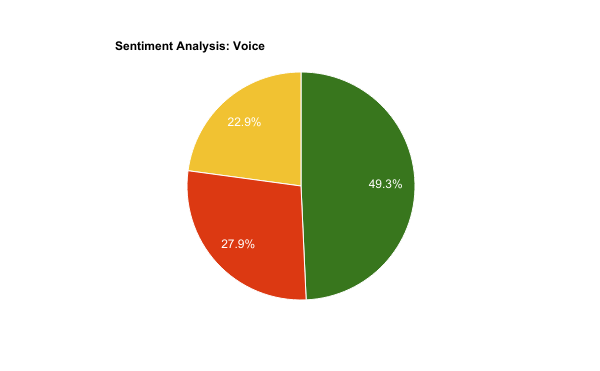 If you look at the overall plain sentiment analysis chart, it shows positive (Green). This is attributed to the emotions like happy, excited and funny, which are all considered positive. However, if you look at the image on the left, most of the tweets discussing the voice quality of the network exhibit anger.

Sentiment analysis alone is not enough of a criteria to measure user perception. Hence, emotion analysis is important to analyse the exact breakdown of the sentiment. And, in this case, majority people seem very upset with the network’s voice.

According to the analysis run on Reliance Jio, the final outcome slides in favour of the brand. Despite some network and other minor issues, it still manages to get a Thumbs up on the internet. Jio has already crossed 100 Million subscribers mark and the Jio family is still growing, making it one of the fastest growing telecommunications network.