Angry Birds, the game that has been downloaded more than 3 billion times – almost enough to give every two living humans a download – started in December 2009. The startup behind the game, Finnish company Rovio, started out as just another game startup.

It might be a familiar progression, that happens in many startups. Three guys open a company, hoping to make a hit game. They launch one, two, three games. Five years go by, now they are launching game number 51. And it’s still not a hit. 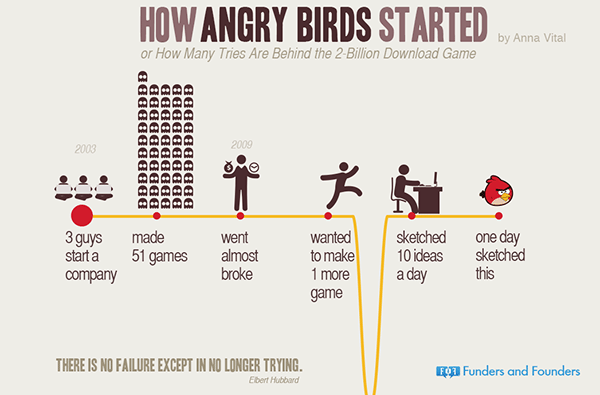 Funding slowly runs out. They are staring bankruptcy in the face. They don’t want to shut the company down because… What if they still can make a game that will capture people’s imagination? They go back to the drawing board. They keep believing that they could capture that imaginary character that people will believe. Maybe if they can just get into the zone, unlock their inner humanity, they can think of a picture that others will believe is real.

They take a methodical approach – they ask the designer to pitch 10 ideas a day. It is 2009. As the days roll on and the funds run out, they conceive a make-or-break plan: make a game for the new hot device – the iPhone.

Daily, the game developers generated ideas and pitched them to management. So far, all of them were rejected. They were either too complicated, too simplistic, or just outright boring. It was around this time that a 30-year old Rovio game designer Jaakko Iisalo was home alone as his wife had gone out for the evening.

Iisalo settled down to play some video games, as he often did when he had free time on his hands. In the background, though, a strange idea began percolating. As he started seeing it in his mind’s eye, Iisalo turned on Photoshop and sketched out a bird with large eyebrows, no feet, and a somewhat deranged expression. Iisalo thought nothing of the bird at the time. When his wife came back home that night, he didn’t even mention it.

But when he showed the bird to the management, the presentation turned into an Aha! moment for the whole company. Looking at the bird, even without knowing the point or the mechanics of the game, they already found it irresistible.

Rovio’s fifty-second game was launched: Angry Birds. The rest is history. Now we can ponder if trying something for fifty times is ever a good idea.

[Editor’s Note: This article was written by Anna Vital and originally published at Funders And Founders. Copyright 2014.]