The Magical Aha Moment For Entrepreneurs

The Magical Aha Moment For Entrepreneurs

Before any entrepreneur became successful there was a time they did not know what to do. And then the aha moment happened. How? 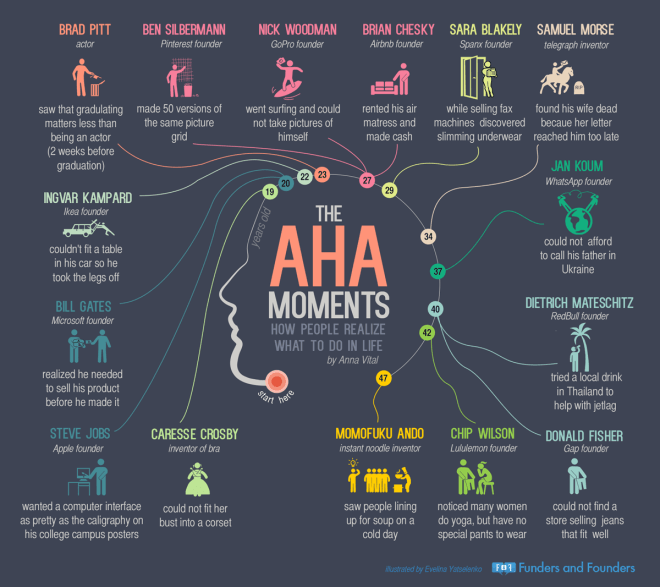 About 2200 years ago Archimedes stepped into his bath and exclaimed, “Eureka!”
It means “I found it.” At that moment Archimedes found a solution to a problem he had been pondering for a long time.

It was a moment of sudden discovery. The eureka effect. A moment of deep insight. It’s an epiphany which translates as “striking appearance.” In that moment a previously unsolvable problem becomes suddenly clear and obvious.

Before The Aha Moment

Life can be divided into two periods. Before you know why you are alive and after. In between there is just a single moment – the Aha! moment. One brainwave that turns a person into a person on a mission.

Here we show the moments that turned famous people onto their missions. Even though for them it was a process to get to that moment, there was a catalyst that one day made them say, “Aha!”

What Makes Us Aha

What brings the Aha moment?

Inconvenience. GoPro founder who struggled to take a picture of himself while surfing.

Limited resources. Ikea founder could not fit a table in his small car, so he thought to take off the legs.

Pain and tragedy. Samuel Morse received a letter about his wife’s illness after she was already buried. Letters took a long time back then. He raced to see her, but it was too late. Grief-stricken, he decided to forever change how people talk to each other and invented the telegraph.

The aha moment comes at different ages. Here are a few examples. Is it ever too late to have the aha moment? Some entrepreneurs had them well into their fifties. Were they thinking it was never too late?

[Editor’s Note:  This article was written by Anna Vital and originally published at Funders And Founders. Copyright 2014.]