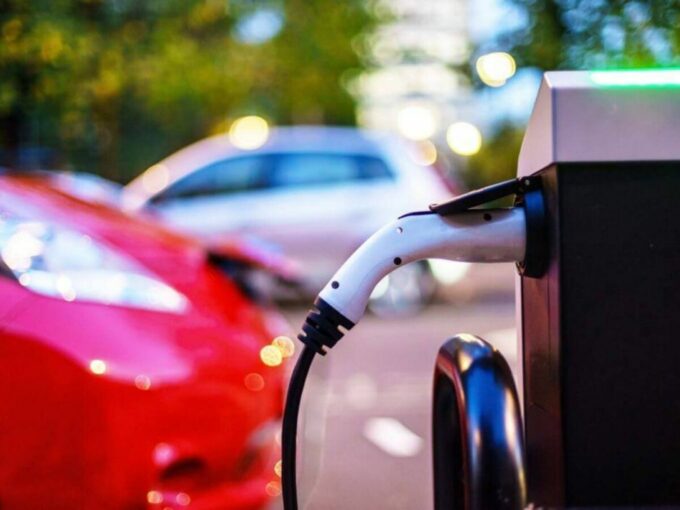 The electrification of the automobile is being enabled by enhancements in battery technologies and growing support for charging infrastructure.

Their long-term advantages are revolutionary for the government, businesses and consumers alike. While there are some challenges in the way, their adoption is more a question of ‘when’ than ‘if.

A transition to EVs has the potential to significantly cut India’s import bill on crude oil which stood at nearly $85 billion this year. In contrast, India’s installed power generation capacity is twice that of its annual demand. While work is still needed to make the installed power accessible, it should keep pace with or exceed EV adoption.

To fully realize the environmental benefits of EVs, they should be charged using energy generated from renewable sources as opposed to coal. Things look promising on this front as 57% of India’s total energy is expected to be renewable by 2027, as opposed to ~35% today.

Any business that operates vehicles can tremendously reduce costs by going electric. Electric vehicles offer lower operating costs than their petrol, diesel and CNG counterparts for all types of vehicles – 2 wheelers, 3 wheelers, cars, buses and trucks. The operating cost per km comes down to 40% or lower for each of the above vehicles. The maintenance cost drastically reduces because electric vehicles don’t have those parts on which maintenance expenditure is the highest in case of IC engine vehicles.

Lower data prices and increasing internet penetration have brought millions of Indians online. India today has close to 100 Mn online shoppers and growing steadily. First and last mile delivery are facets of ecommerce businesses. All of this means more customers to be served, more distances to be covered and more vehicles to be deployed. With EVs, it gives rise to the possibility to save millions in operating costs. Companies like Big Basket, Zomato, Blowhorn, Flipkart etc. have begun deploying EVs and more should rapidly follow suit.

The government has been the frontrunner in propagating EVs. Several policy measures have been initiated to boost electric vehicle adoption. These include FAME II, GST reduction on both manufacturing electric vehicles and charging infrastructure, income tax deduction on interest paid on loans to purchase EVs among others.

Challenges And Paths To Overcoming Them

The price of an electric vehicle remains higher than that of equivalent ICE vehicles today. However, with transition to lithium-ion for batteries, which make up ~40% of the total vehicle cost, the total cost of ownership will come down. Technological advancements, increase in battery density, economies of scale owing to higher global demand and replacement of cobalt with other cheaper metals like nickel are some of the factors contributing to decrease in lithium-ion battery prices, which have fallen from $1000 per kw/H in 2010 to ~$200 per kw/H in 2019. This is expected to further reduce to $100 per kw/h by 2025. To achieve greater market penetration, companies are likely to pass on these benefits to their customers.

The other hurdle is the claimed lack of charging infrastructure. While charging stations are few and far apart today, this is a major concern for only 4Ws.  Two-wheelers are largely charged at home and electric rickshaws, which have been around for several years, usually have enough range to last a day’s work or have dedicated hubs for charging. Companies such as TATA Power, Delta Electronics, Fortum etc. have begun installing charging stations in partnership with vehicle OEMs and the government for all types of vehicles. Battery swapping is a model being extensively tested and should mitigate range anxiety and reduce costs.

India Is Finally On The EV Investment Map

By December 2019, close to $40 Bn has been invested in companies building solutions for the electric vehicles sector across the globe. India accounts for merely ~1.6% of this. 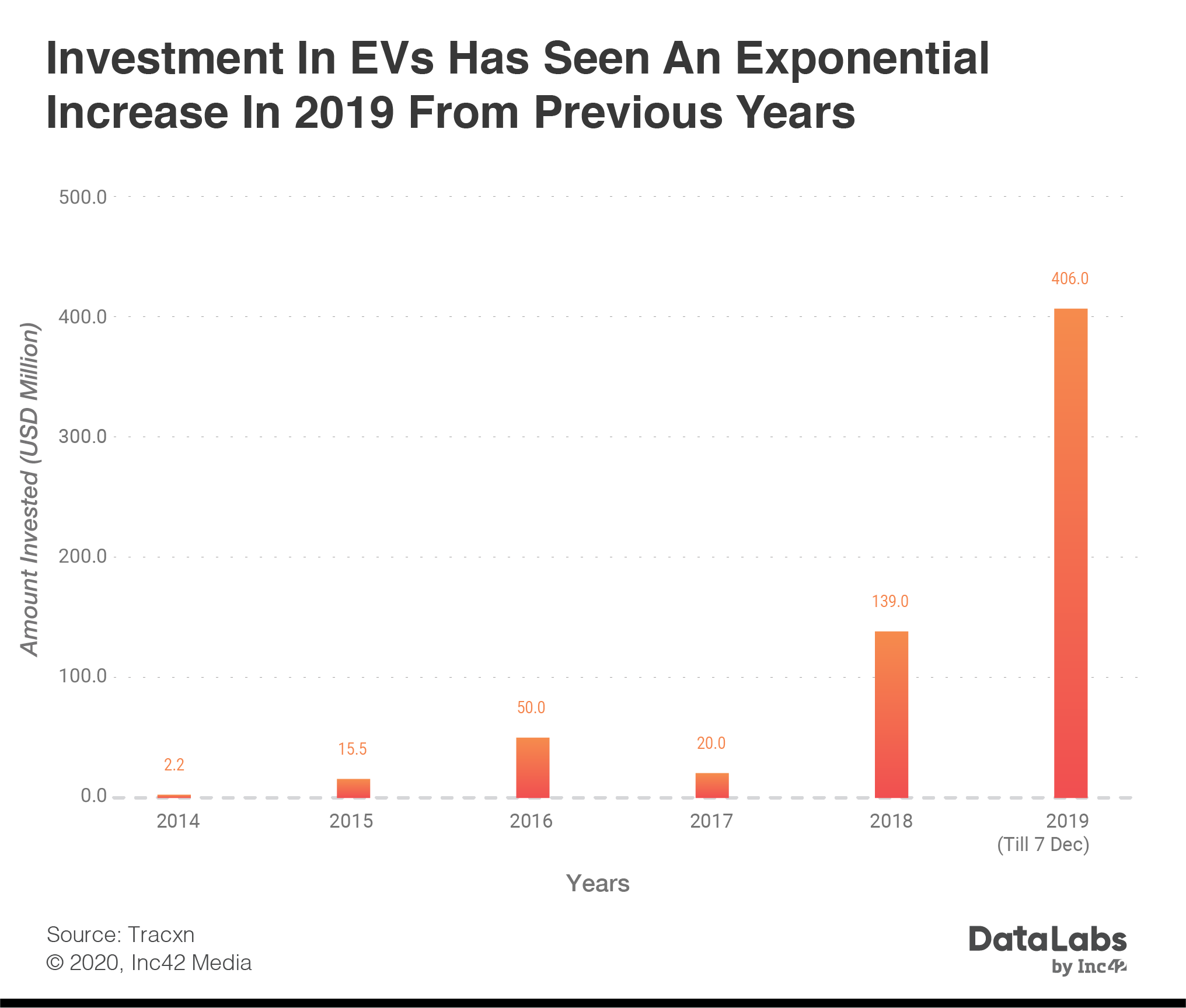 However, investment in Indian EV startups has soared from ~$20 million in 2017 to ~406 million so far in 2019, an extraordinary increase. While Ola Electric, with its $300 million in funding is an obvious outlier, start-ups such as Ather Energy, Twenty-Two Motors, Lithium Cabs, Yulu, Zypp, SmartE, among others, have been able to attract funding,

So, what are the areas where investments are likely to flow in 2020?

The current EV ecosystem can be divided into four categories:

This is the core, the actual electric vehicle. If we look at electric two-wheelers and three-wheelers in the Indian market today, they are mostly direct and indirect Chinese imports with very little value addition. All that is needed is minimal customization and homologation to make them compliant with Indian norms. Only a few startups and OEMs are building from scratch in India. Personal use is an obvious use case, but higher potential could lie in building these vehicles for logistics, hyperlocal delivery and micro-mobility. We may have missed the bus in manufacturing leadership in most of the critical segments, but the opportunity to reverse that trend with EVs could be viable.

The battery is the heart of the vehicle and lithium-ion is widely touted as the most advanced technology. The likes of Exide and Suzuki have announced plans for lithium-ion battery plants in India.  However, startups have the potential to experiment with other technologies such as supercapacitor and metal-air that reduce dependence on imports. Components like BMS and motor also need to be customized for India specific conditions and local sourcing will be vital for OEMs to avail subsidies. This is where startups such as Cell Propulsion can fill a significant need in the supply chain. OEMs may not be able to rely on their existing suppliers for these parts due to their lack of experience with EVs, that have unique technological nuances.

Electric vehicles as a service is a model that has been explored in the app-based ride-sharing or the micro-mobility business by startups such as SmartE and Yulu that have an electric fleet. Others such as Vogo and Bounce have scaled immensely in the last year or so and are moving towards electrifying their fleet. The economics of these players are more likely to succeed with EVs than ICE vehicles. Lithium Cabs is offering electric cab services by partnering with the likes of TATA and Mahindra for their vehicles.

Divided into charging stations and battery swapping. The former is being spearheaded by government bodies such as EESL in partnership with larger players such as Delta Electronics. When it comes to battery swapping, there is potential to take away both the high upfront cost and long charging times with dedicated swap stations. Hyderabad based RACEnergy is enabling auto drivers to reduce downtime for refuelling, earn more per ride and transition to electric through its retrofit kit and battery swapping technology.

Patient Capital Is The Need Of The Hour

While each of the segments above has their individual nuances, we predict that startups in this space will need 3-5 years to find stability, ward off major competition and start becoming core players in this space. Investors who might be used to looking at a 3-6-year horizon might be much better off looking at an 8-10 year one when it comes to EVs.

Early signs of a strategic investment in Ather by Hero or in Yulu by Bajaj could hint towards acquisitions eventually becoming a theme in this space. Players in the automotive industry are known to grow inorganically and may prefer buying overbuilding for EVs. For services, we could see consolidation among some of the incumbents before they become acquisition targets for the likes of Ola or Uber. Component manufacturers can have a profitable growth journey of their own or eventually become targets for auto parts suppliers.

For any exit to materialise, these startups will first need to prove themselves through a differentiated technology and validation through revenues. There is much to be optimistic about as a concerted effort among startups, investors, accelerators and the government is starting to take shape to build EVs, not as a trend, but a technology of the future and a way of life.

In summary, the consumer is the real winner. It’s about time we let the market forces and the impertinent demand for cleaner air and greener planet be given the due importance. As the two-wheeler and three-wheeler segments pick up pace towards electrification, the much larger segments of PV (four-wheeler passenger vehicles) and buses/trucks will also follow suit in a few years from now.

[The article is co-authored by Hetal Sonpal, a Huddle mentor, and Sanil Sachar, Huddle, founder and partner.]