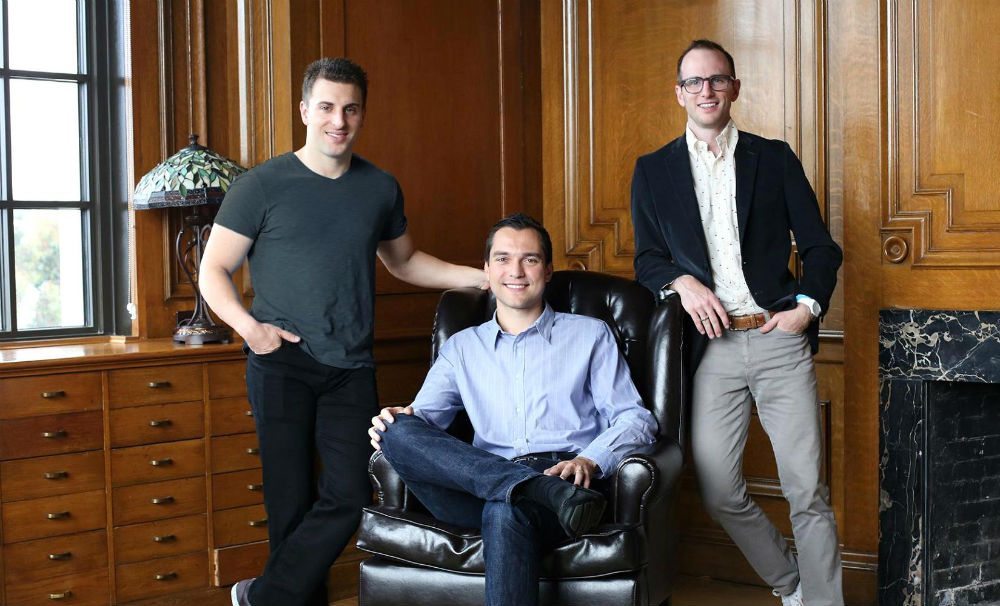 When AirBnB, a San Francisco-based home rental service, raised $1.5 Bn last December, its $25 Bn valuation placed it next to Uber (valued at $62.5 Bn) and Xiaomi ($46 Bn), shaking the entire startup industry. Eight years ago, what started as just an air mattress rental and breakfast startup, now have nearly 2 Mn listings in 34,000 cities, with 80 Mn guests already hosted around the world.

Since its inception in 2008, AirBnB has changed people’s perception towards hospitality and travel. But the road to success is never easy and it comes with its own costs, failures and roadblocks.

Let’s time travel with the infographic below by Funders and Founders and see the journey of how 3 regular guys in their 20’s, looking for ideas to make their ends meet, finally end up becoming billionaires. It’s The Idea That Makes A Business Big, Not Money

In October 2007, when Joe Gebbia sent an email to his roommate Brian Chesky, he was not aware that he was roping in seeds for a billion dollar company. The email went like this: “What if they made a designer’s bed and breakfast, complete with a sleeping mat and breakfast? It was a way to make a few bucks.”

So, they began with a simple website (airbedandbreakfast.com), bought three air mattresses and gave their apartment on rent. Their first clients were two men and a woman, each paying out $80 rent. With $240 in hand the very first day, both realised that there is something big in here.

With this thought in mind, they approached their former roommate Nathan Blecharczyk to develop a more professional website. He finally ended up becoming the third co-founder.

There’s Always A Way Out

The new website was launched in 2008, but no one noticed. So, they decided to launch it again at the annual event of SxSW. However, the five day festival ended up with only two customers for the startup, with Chesky being one of them.

Despite such disappointment, they again pitched their idea at the 2008 Democratic National Convention in Denver. Since the website was not helping, they planned for an offline marketing campaign and transformed regular cereal boxes into limited edition packs of Obama O’s and Cap’n McCains before the election. Each pack provided information about Airbnb. This strategy helped them sell 800 boxes at $40 each, which generated $30,000 for company’s incubation.

Another good thing happened – Paul Graham took notice of them and invited them to be a part of Y Combinator’s 2009 batch (three months training) and infused $20,000 (making it Airbnb’s first funding).

Figure Out What’s Not Working Amidst a Slowdown

In 2008, more than 15 investors rejected them outright and their friends advised them to look for other options. The trio spent the first three months of year 2009 at Y Combinator, but failed to convince investors about the possibility of turning this into a profitable business. It was a difficult time for the company as the weekly revenues were stuck at $200 and there was nearly no visibility, no growth and cash running out to its max.

While brainstorming, they suddenly realised that it’s the photos on the portal that really sucked. The next steps involved taking a camera on rent, going door-to-door in NYC, building connections with the hosts and shooting  photos of all the leased houses. As soon as they replaced the amateur photography with high resolution photos, the revenues got doubled to $400 per week. Another turning point came when famous singer Barry Manilow’s drummer rented an entire apartment from them.

As stated by Gabbia, the team initially believed that everything they did had to be ‘scalable.’ It was only when they gave themselves permission to experiment with non-scalable changes to the business that they climbed out of what they called the ‘trough of sorrow.’

Rejections Doesn’t Imply An End To The Game

Finally, their design worked and the company, which struggled in 2008 to raise $150K, picked up $600K seed fund from Sequoia Capital in April 2009. Since then, there has been no looking back. The $7.2 Mn Series A in 2010 and the next round of $112 Mn from Andreessen Horowitz at a valuation of $1 Bn, made Airbnb a Silicon Valley unicorn.

In 2014, the valuation soared to $10 Bn, making investors like Fred Wilson, co-founder of Union Square Ventures, severely regret their decision. “We missed Airbnb even though we loved the team. Big mistake. The cereal box will remain in our conference room as a warning not to make that mistake again.”

In 2015, in a post on social blogging platform Medium, Brian shared 7 rejection letters that they got from investors in 2008. The replies included phrases like “not in our area of focus”, “don’t think it’s the right opportunity”, ”it’s a long shot for our involvement.” The letters were all alike, just with a change in tone, ranging from both humble to curt. After 9 years, here is Brian’s cool reply to that – “The investors that rejected us were smart people, and I am sure we didn’t look very impressive at the time.”

Since the inception of idea in 2007, Airbnb has fought a lot of battles, be it legal, financial or with the growing competitors. It’s not that it won every battle, but to get positioned at $25 Bn, every single effort was worth.

A Goldman Sachs recent report shows that Airbnb users who try the service once are less likely to choose hotels for their next vacation. Also, in month of June this year, Airbnb has secured a $1 Bn debt facility to aid its new services and finance its expansion plans. The investment was led by banks like J.P. Morgan, Citigroup Inc, Morgan Stanley and Bank of America.

Airbnb’s journey is a typical roadmap which inculcates all kinds of challenges that an entrepreneur has to face while building up an idea. But, only those who could get past these obstacles could win the battle and make it to the extremes. In the words of Gebbia, “Anytime somebody comes to me with something, my first instinct when I look at it is to think bigger. That’s my instinctual piece of advice. Think bigger. Whatever it is, blow it out of proportion and see where that takes you.”