The Framework: How Back-To-Office Startups Are Dealing With The New Reality

The Framework: How Back-To-Office Startups Are Dealing With The New Reality 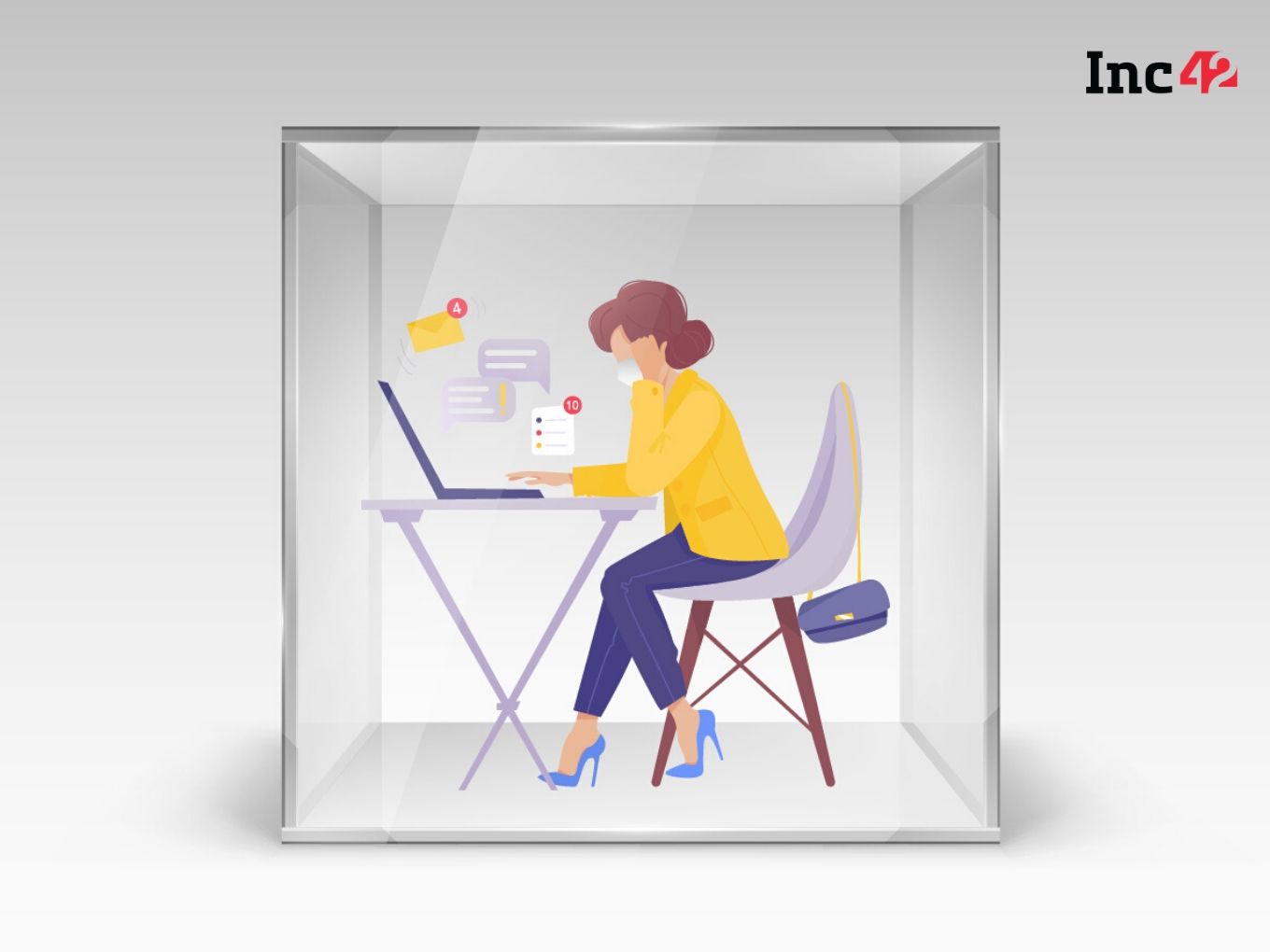 A new world order requires new frameworks for businesses to operate in a post-Covid19 world. Our series on how companies are adapting to WFH, pivoting their business models, redefining business functions and processes, and more.

Around the world, companies are getting ready for the new version of the office with thermal scanners, health trackers, hourly temperature checks, sealed work zones, solo lunches and meeting rooms replaced by video calls. Even in India, as the government extended the lockdown to mid-May, it split India into red, orange, green and contamination zones and eased restrictions in orange and green zones. Private offices have been allowed to operate at 33% capacity from May 4, as per their requirements, with most employees working from home.

But the world that we left behind in the mid-March is not the one that we will be returning back to.  Since the early days of lockdown, tech leaders have been weighing the possibility of going completely or predominantly remote. Some even claimed that working from home makes them and their team more productive and motivated. Business leaders around the world have predicted that weeks of mandatory remote work may cause some irreversible changes to workplaces. For one, companies might welcome the idea of distributed teams with open arms.

Twitter became the first one to actualise that prediction, the social media major has made remote working a real option for its employees for however long they wish to. “If our employees are in a role and situation that enables them to work from home and they want to continue to do so forever, we will make that happen,” Twitter said in a blog. India’s largest IT service company TCS, also realised that it doesn’t need more than 25% of its workforce in office for 100% productivity. The company has planned to make 75% of its remote by 2025.

Arguably, 40 days are enough to form a habit and this time of mandatory remote work has definitely made some companies comfortable with the idea of a distributed workforce. But for the ones who are going back to the office, there will likely be a big period of adjustment as we are hearing from the industry.

The biggest question about opening offices is maintaining social distancing measures. One of the ways companies are answering that problem is by reducing the density of people in office spaces.

Neobanking startup Niyo has planned to allow only up to one third of its employees to offices at first, and then invite the others later on. “It is not mandatory for anyone to physically come to our offices, but employees have an option to choose to come to office in case they feel it is required,” said Vinay Bagri, CEO and cofounder of Niyo.

The company is also conducting internal employee surveys to understand how critical it is for each employee to be physically present at the offices. Bagri added that the teams that will be physically present at the offices on a voluntary basis would include IT security and IT infrastructure, backend and platform technology teams and select customer support executives who provide on call customer support. Even here the workforce at the office will be pared down.

But even after limiting the number of employees, offices are communal spaces and coworkers are bound to come in contact with common spaces like elevators, toilets, and meeting rooms, among others. Thus, there is a need for a strict sanitisation and social distancing measures to ensure a safe work environment.

Capital Float said that temperature checks will be conducted at entry points of the office and entry of non-employees will be restricted in the office building. In addition to this, the company will be sanitizing the entire office every week and all employees have been given masks to wear at all times.

The office seating arrangement has been changed to ensure social distancing is practiced in the office. “We have opened our Bangalore office this week and currently have 20 people working from the premises, which typically accommodates over 200 employees. Even as we increase the number of people working from the office, we will plan the seating arrangements accordingly to adhere to social distancing norms,” said cofounder and MD, Gaurav Hinduja.

In terms of access to shared spaces, Capital Float has restricted the usage of elevators and recommended the use of video-conferencing for meetings even while working from the office.

Niyo is also in the process of assembling all the necessary tools to keep the office running safely. This would include temperature checks, regular sanitizing, maintaining safe distance between workspaces, noted Bagri from Niyo.

Longer commute hours seem to be the least worrisome thing about office now. A much more complex problem is the people’s loss of safety and reliance on public transportation. While navigating a familiar space such an office is easy, employers cannot do much to ensure an employee’s safety during the commute.

What makes this more disconcerting is the fact that employers could be held liable for any employees testing positive for Covid-19 during the course of everyday operations, with some exceptions.

Niyo has made travelling to the office optional for employees and says it hasn’t planned to provide any alternate transportation facility. However, the company has a policy of providing additional allowance over and above the housing rent available as part of compensation if an employee stays near Niyo’s corporate office in Bangalore.

Gurugram-based IndiaLends is also laying out plans to welcome back employees after lockdown extension ends on May 17, pending any further extensions. According to Anu Yadav, vice president-HR at IndiaLends, the company already has the existing transport infrastructure which was earlier used as a shuttle service for employees between metro and office, and the company will take a further call on transport facilities going forward.

Are Employees Willing To Come Back?

A staggering 93% of India Inc employees are anxious about returning to the office and fear that it might compromise their health, according to a study by MindMap Advance Research. Further, 99% of these surveyed employees want corporate health responsibility (CHR) to be made mandatory for companies.

MindMap Advance Research surveyed 560 employees across small, medium, and large enterprises in Delhi-NCR, Mumbai, and Bengaluru. While the sample size is small, these are the cities that generate the most employment in the tech sector.

Despite the extensive social distancing measures and isolated working spaces, containing the infection risk in high-density office complexes is no easy task. In South Korean capital Seoul, the Korean Centers for Disease Control and Prevention (KCDC) conducted an investigation of a pocket of cases in a highrise and concluded that office workers are at great risk in such closed spaces. The report noted that coworkers are more at risk of the infection if they are clustered together.

Out of 1,145 people working or residing in the building, the clusters were larger for the set of people who worked near each other.

This was regardless of whether workers and residents of the building came into contact with each other via shared facilities such as elevators. Instead, the duration of interaction was likely the main facilitator for the spread of SARS-CoV-2, the report added.

Last week, Flipkart cofounder Sachin Bansal argued that the decision of going to office should be left to the people. The ones who want to stay home can stay and folks who venture out should maintain precautions but be allowed to work if they wish to. “With Covid’s growth slowing down, it’s time to open up the economy. We have to learn to live with the virus,” Bansal said.

But is the growth slowing down? The last week has seen a barrage of new confirmed cases which has taken India’s tally to over 80K (May 14, 2020).

In India, a group of scientists and medical researchers urged the government to reveal a post-lockdown plan that will ensure that the rate of new infections is kept low in a sustainable manner when businesses get back to the office. While social distancing and better hygiene can help, these measures are insufficient by themselves.

“The current restricted testing policy creates the risk that a large number of mildly symptomatic or asymptomatic cases — which constitute the majority of infections — will remain undetected even at the end of the lockdown period. These cases could easily serve as the nucleus for the epidemic to bounce back,” the group said ominously.