Teachers And Technology: Friends Or Foes?

Teachers And Technology: Friends Or Foes? 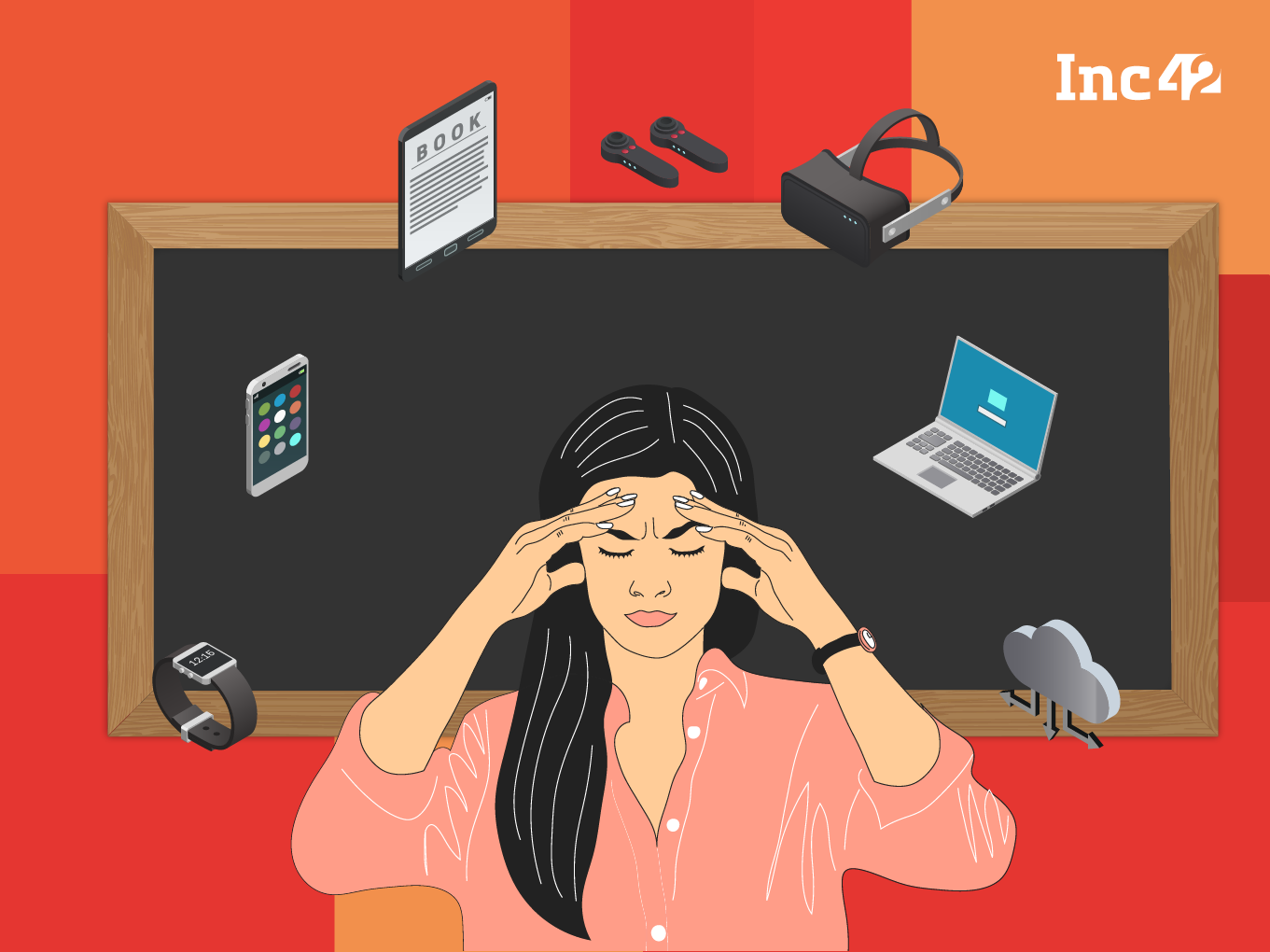 Parents are reluctant to rely completely on tech products for learning, owing to fears of skill deficiencies

Even among schools where tech has entered the classrooms, the question is how effective it really is

A quick throwback. In the popular 60’s cartoon show “The Jetsons” on the life of a family of four living 100 years in the future, the youngest of the kids Elroy is being schooled by a robot teacher named Mrs Brainmocker. Now nearly 60 years later, a Bengaluru school has created a humanoid teacher who teaches seventh to ninth grade kids five subjects as technology takes Indian schools towards the future.

The 5’7” robot dressed in formal attire currently looks like a female mannequin come to life and moves about on wheels. Indus International School says it is working on making the robot more ‘human-like’ using silicone and other lifelike materials and that it’s not an attempt to replace teachers but more about assisting the human teachers who may find repetitive nature of some classes mundane or a time-sink.

Yes, given long enough a timeline, facts do get stranger than fiction.

One need not even go back half a decade to review the transformation in the Indian education system.

In the last decade alone, BYJU’s has spent millions trying to replace coaching classes and textbooks and has led the edtech revolution that has been the biggest change for Indian schools. And that also includes the educators on whom the whole system rests.

Struggle as they might to come to terms with this idea, teachers are no longer the primary source of information for kids. As the ecosystem of content creators, hardware makers and internet connectivity matures, students have access to learning material anywhere and anytime. Naturally, one wonders whether teachers would indeed be redundant in the future?

Meenal Arora, a teacher and the founder-director of Shemford Schools, a large private school chain, has a different take on the role of teachers in the future.

“10 years from now children will not be coming to school to learn but to develop social skills, to develop friendships because with educational technology coming in big time, kids can access everything from home.”

In a 2017 report, the US Department of Education said the role of tech in classrooms needs to be geared towards increasing the access to learning opportunities and strengthening relationships between parents, educators and children. It also indicated that technology is more effective when adults and children interact together in the learning journey.

The same report said that in a tech-enabled classroom, teachers would move on from information providers to co-learners and this is why the role of teachers will change from instructors to guides or chaperones.

“Side-by-side, students and teachers can become engineers of collaboration, designers of learning experiences, leaders, guides, and catalysts of change,” said the US state department of education.

The shift in roles is naturally going to be tumultuous for teachers and educators. If the last decade has been rocky, then the one ahead brings more uncertainties than ever before.

“Seven years ago when we started introducing tech into classrooms, a lot of teachers were resistant.”

Among the chief concerns was that teachers would have to update themselves before they claim to be ready to use these tools, thus increasing their workload. The training of teachers is also an additional cost for the school.

“The school management now holds a three-day offsite training programme for all its teachers to train them in using technology. But it is a slow and constant process,” Shemford’s founder-director added.

Edtech startups have a key role to play in this transition — after all, it’s their products that are being unloaded on unsuspecting teachers. How much of this burden do they assume? Vamsi Krishna, founder of edtech startup Vedantu, said the current situation is similar to the transition that happened with ecommerce in 2011-12.

“A lot of people then had said that how can online shopping get popular with India’s shopping habits. Three years back teachers were very wary of technology but now teachers are not just warmed up to it but also looking forward to jumping on to the online education bandwagon as they say that this is where the future lies.”

Vedantu runs an online tutoring platform where teachers can conduct one-on-one classes virtually. It’s just one of a slew of such apps and products for millions of teachers and educators in India.

If parents are to blame for tech being shoved into classrooms, ironically they are also the tether that’s keeping the influence of teachers alive.

Akhil Shahani, CEO of the Shahani Group, which runs the 100-year old Thadomal Shahani group of colleges and schools in Mumbai, explained that the reluctance of parents is keeping schools from going the whole hog on technology.

”Currently, parents are using edtech products like BYJU’s and Toppr content as a supplement to tuition classes. Nobody is going to say I am going to risk my child’s future carTopoeer by just using edtech products. The thing is even if you just show students videos in class you will still need teachers to check the test papers.”

This, of course, doesn’t mean that the Shahani Group has not dabbled in edtech — its par for the course in the education sector these days. The group’s Smart Institute raised $1.5 Mn in Series A round led by investment firm Ah! Ventures, which it will use to enhance its edtech application Ask.Careers. At the time of the announcement, the group said it wants to venture into Southeast Asia, the Middle East and North Africa regions. In addition, the company aims to invest in other edtech startups through Ask.Careers.

The platform offers career-oriented diplomas in banking, real estate, digital marketing and management through a “blended learning model”, which is basically offline courses that are also available online. So in some ways, the group is playing it safe for the moment.

Is Technology Helping The Kids?

Among the schools where tech has already been infused into the classrooms, the question is how effective it is. While concerns from teachers and the transition pains to tech are understandable, they might even be worth it, if it’s actually helping the one group that all is supposedly meant for — students.

Perhaps the biggest dampener on the teachers’ enthusiasm for technology is that it is yet to show any significant improvement in the learning outcomes of children. While the edtech market has tripled itself to a $1.96 Bn market in the last five years, moving the needle on learning outcomes has proved to be a much slower process.

“If I am very honest, most of the students use technology only to solve assignments. Earlier students would come back with the questions that they did not understand, now they just Google it,” Nisha Vashist, a chemistry teacher for 11th and 12th classes in a Delhi-based private school said.

There are positives as well as negatives, she insisted. According to Vashist, while dedicated students do much better due to the increased access to content, the hard work that a student used to put in has reduced now, and, of course, plagiarism has increased.

“It all depends on what kind of student you are, if you are dishonest, edtech makes it easier for you to cheat.” – Nisha Vashist, Delhi-based chemistry teacher.

This is the thing that is discussed very little in the education circles. Despite edtech platforms and massive amounts of content, nobody has been able to prove that students performance has increased drastically because of these new-age teaching products.
According to the Annual Status of Education Report (ASER) released on January 14 this year, between 25% to 75% of school children in the age group of 4-8 years do not have age-appropriate cognitive and numeracy skills, indicating a massive learning deficit at a very early age.

As per analysis on education system data recorded by DataLabs By Inc42 in The Future Of India’s $2 Bn Edtech Opportunity Report, 2020, more than half of India’s workforce will require reskilling to meet the talent demands of industrial revolution 4.0 by 2022 — emerging skill requirements are primarily focused on areas such as technology-led design and programming, complex problem solving, reasoning, ideation, emotional intelligence, critical thinking, and analysis.

These are the students that technology does not reach, and if it does indeed reach them through smartphone-based apps, it does not have the same gravity as a lesson in the classroom. 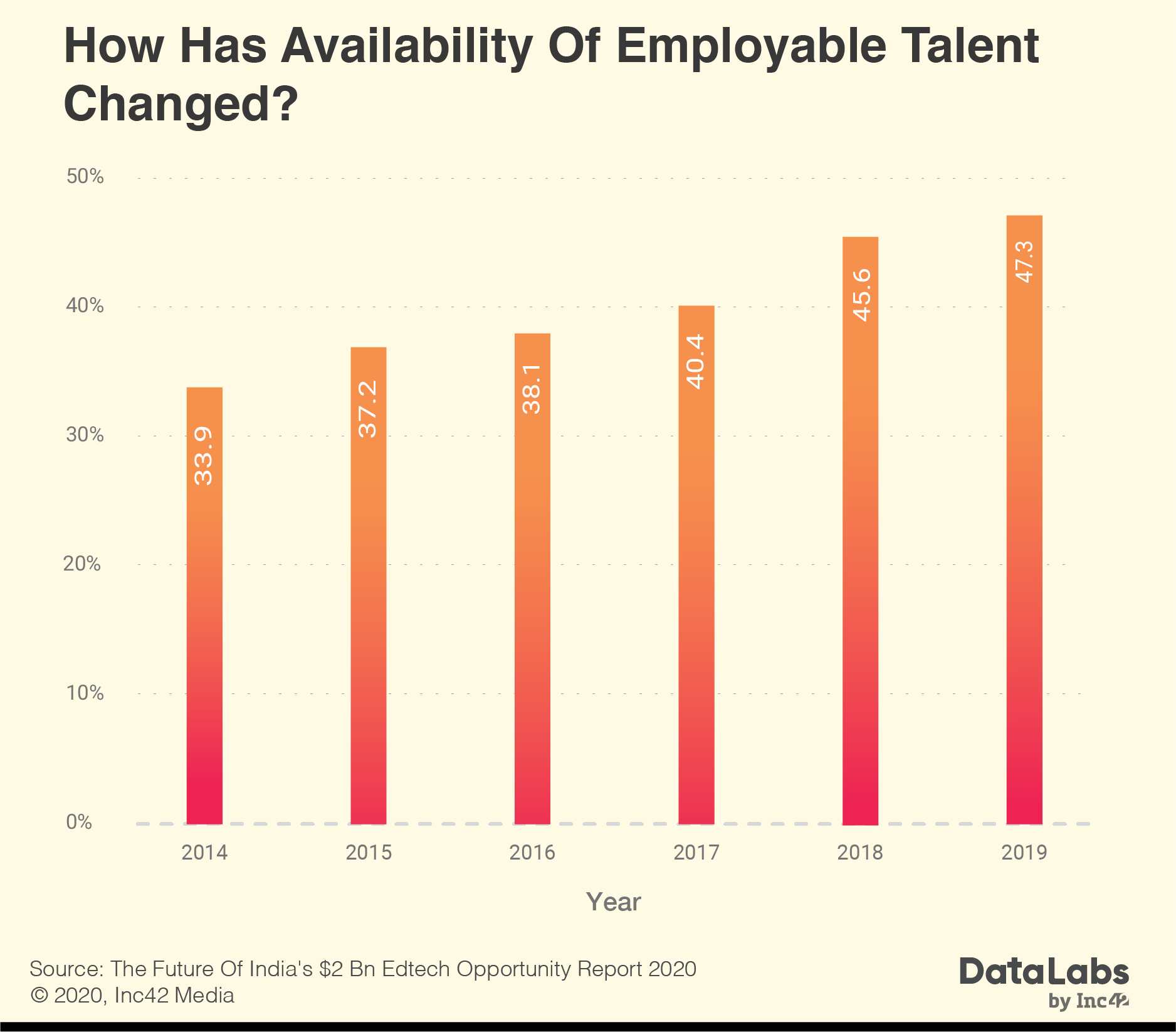 Comparing the learning outcomes of Indian students to international standards is much harder as India has stayed away from the global Programme for International Student Assessment (PISA) exams for over a decade. But suffice to say, the situation is not great — domestically or in international comparisons. India was ranked 72 out of 73 countries when it last took part in the PISA survey 2009, outperforming only Kyrgyzstan. Last year India said that 1.73 Lakh government school kids will take part in the 2021 PISA tests, by when we would be able to see whether edtech has had any impact.

“The Solow Paradox is creeping into the field of education,” Shahani told us.

Economist Robert Solow had observed, “You can see the age of computer everywhere, but in productivity statistics”

This paradox first came to light in the 1980s and 1990s during a boom in the office automation market. Despite increased spending on telephones, fax machines and more, the actual productivity of people had not really increased.

Multiple studies (like this and this) have shown that the “One Laptop Per Child” craze that swept through the world a few years back has had little impact on educational outcomes. Students who took notes on laptops performed worse than those who took notes by hand on conceptual questions due to distractions and showed shallower processing ability.

In 2018, Professor S. Craig Watkins led a team of researchers at the University of Texas at Austin to explore the socioeconomic digital divide in US high schools over the course of a year and a half. The study was later made into a book called The Digital Edge: How Black and Latino Youth Navigate Digital Inequality and showed that educators need to consider the bigger picture before introducing tech in curriculum building and the learning process.

“There’s this assumption that just by providing access to the technology you’re somehow creating a better learning future for kids, but that is not always the case.”