The Kerala Government website – kerala.gov.in, was hacked by a team of “suspected Pakistan-based hackers” allegedly on Saturday night. They posted a picture of a burning Indian flag and messages like “Hacked By Faisal 1337”, “Pakistan Zindabad” and “We Are Team of Pakistani Cyber Attacker, Security is just an illusion”. 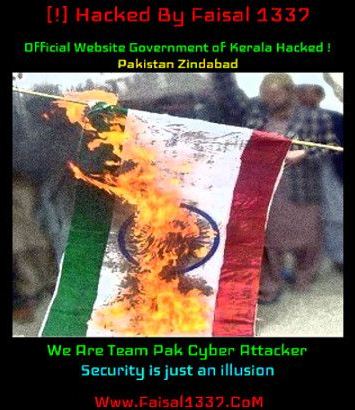 “Such instances of hacking have taken place all over the world. Once the state police’s proposed cyber dome facility at Technopark here becomes functional, security auditing of all government websites will be carried out and we will be able to take all precautionary measures,” home minister Ramesh Chennithala said in a Facebook post.

The group posted a message on its Facebook page stating, “Greetings Pakistan Script Kiddies #OP_PAK_CYBER_SPACE. Payback is not done yet. Around 100+ Pakistan Websites got Defaced By Indian Hackers. This is a payback for hacking kerala.gov.in. United as one Divided by zero !!! Special Thanks to Hell Shield Hackers, Team Hind Hackers, CY83R_P1R4735.” In a Pastebin message, the group ‘Hell Shield Hackers’ stated that the motive behind this attack was to retaliate against the attack on the Kerala government website.

“Indian Hackers haven’t hacked a single Pakistani site after 15th August 2015. But Faisal Afzal hacked kerala.gov.in .. Dude? We are not sleeping. If you even touch a Indian site, we will crush you up.. :3 .Now feel the heat pakistan.gov.pk hacked,” the group said.

Here is the list of all the hacked and defaced Pakistani websites.