Besides India, the platform has been launched in the US, UK, Australia and the Middle East

Features include AI-based smart assistant Zia, along with access to Zoho’s suite of products

“Zoho has always kept a series of products up its sleeve to be able to reinvent itself and not fall out of the race,” Zoho’s Sridhar Vembu had once said. The Chennai-based SaaS unicorn founder unrolled yet another layer of this proverbial sleeve to enter the cloud applications market for ecommerce with Zoho Commerce.

Vembu has followed that strategy now for more than 20 years, launching more than 50 products under Zoho’s catalogue and on-boarding 45 Mn users globally.

Zoho Commerce is an end-to-end SaaS ecommerce solution for small and medium businesses aiming to build their brand online. Positioned as a low code platform, Zoho claims to enable retailers set up an online store in just a few hours, using a familiar drag-and-drop website builder, and configuring payment and shipping details.

Zoho is also throwing in its AI-based assistant Zia, which would give customers product recommendations based on their purchasing patterns, one click GST compliance and tax-filing assistance.

With this move, the company is looking to tap the burgeoning opportunity in ecommerce due to the ongoing digital transformation in the country. According to a December 2018 report by IBEF, India’s total internet user base is expected to rise to 829 Mn by 2021 from 560.01 Mn as of September 2018. Also, revenue from ecommerce in India is expected to jump from $39 Bn in 2017 to $120 Bn in 2020, growing at an annual rate of 51%.

Besides India, Zoho has launched its SaaS ecommerce application in international markets including the US, UK, Australia and the Middle East. It announced a user base of 3000 for Zoho Commerce, of which 10% are from India.

“We have customers using different Zoho products at the back end. But the missing piece here was the storefront. Zoho Commerce aims to fill this gap for our existing and new consumers,” Hyther Nizam, Vice President – Product Management at Zoho shared with Inc42.

Despite many firsts, Zoho is admittedly quite a late entry in the Indian SaaS ecommerce segment. With the popularity of ecommerce marketplaces Flipkart and Amazon as well as the increased base of online shoppers (expected to reach 273.6 Mn in 2019), a number of players already cater to a large chunk of SMBs in the Indian market.

Key homegrown players here include Zepo, Martjack, Kartrocket, Shopify, BuildaBazaar (by Infibeam), SellMojo and StoreHippo among others. Shopify, the global leader in this space, has an 8% global market share in SaaS ecommerce, so it’s a long-tail market

However, Nizam believes there is a big opportunity in India for an established player like Zoho, especially because the value is scattered in the entire online selling spectrum in the country, and the existing players are really weak in terms of an end-to-end offering. In contrast , Zoho can leverage its array of products to bridge this gap, such as its existing base of ecommerce customers already using its accounting, CRM, email marketing tools, among others.

Saahil Goel, CEO and cofounder at ecommerce logistics and shipping software solution ShipRocket shares Nizam’s belief. He says that with an existing large customer base that’s already using other products from Zoho’s suite, the strategy is most likely focused on average revenue per user (ARPU) expansion from the current user base.

“Further, smaller merchants prefer to use a single platform to manage most of their online operations, Zoho can definitely help there,” says Goel, who is also the cofounder of C2C mobile marketplace Kraftly and SaaS ecommerce platform KartRocket.

Zoho Commerce: Where Does It Hold The Edge?

As Nizam says, “It’s not a one product game any more.” A typical merchant that comes online looks for addons such as product catalogue, website building and hosting, orders and payments, inventory and shipping, marketing as well as reports.

These customers also require training around digital marketing, building their own brand, driving traffic to their platform and more. “Zoho Commerce will help them with all these aspects and provide an experience equivalent to that of an online marketplace, at a much lesser cost,” Nizam adds.

If we have a look at the features offered by all the players in SaaS ecommerce, it’s more or less the same. However, Zoho is able to offer more competitive pricing when compared to its rivals. This is largely because the built-in product suite the company is able to offer merchants in one go on the same platform such as Zoho Social, Zoho Books, Zoho Inventory, Zoho Checkout, Zoho Analytics and many more.

In comparison, most of the players are providing these services as partnerships or tie-ups with the likes of MailChimp, Olark Chat, Yotpo and others. Zepo is the only exception and offers a Zoho-like suite of products to its consumers as part of the complete ecommerce solution, including Zepo Website, Zepo Marketplace, Zepo Couriers and Zepo Marketing.

Here’s how Zoho Commerce stacks up to the competition:

SaaS Ecommerce: Can Any One Player Rule It All?

There are many promising signs that indicate there’s room for Zoho Commerce to compete and grab a sizeable market share. The increasing penetration of ecommerce in geographies, the rise in adoption of mobile and digital technologies among consumers, along with the increasing adoption of SaaS, ecommerce software by SMBs, are all healthy markers. The market is expected to reach $132.5 Bn by 2020 from $105.4 Bn in 2017, reveals a September 2018 report by CredenceResearch. The same scene is also playing out in the Indian market as ecommerce and mobile shopping explodes.

The benefits of online sales are clear for conventional, brick-and-mortar stores across categories as they are increasingly shifting towards digital commerce. This factor has opened up the growth opportunity for ecommerce software market, worldwide, which is what Zoho is hoping to capitalize on.

As we can see no one player has a dominant position  in the global market, according to this infographic from BuiltWith blog. 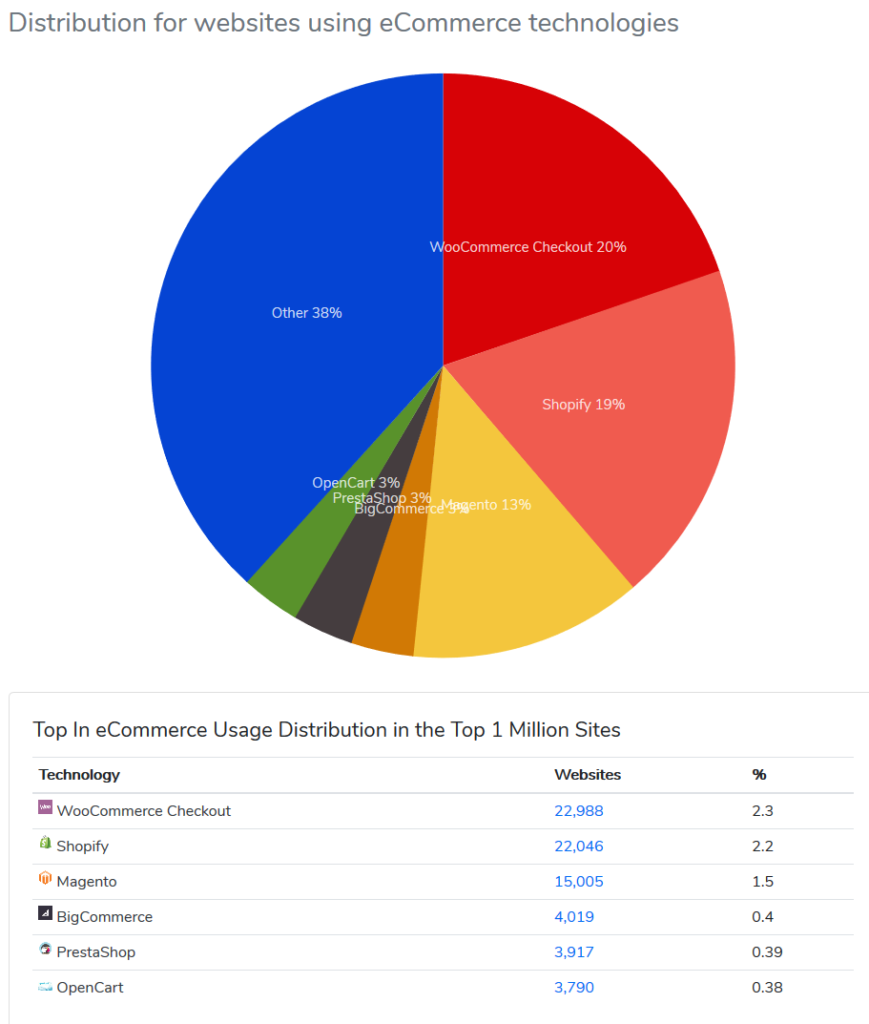 As Goel told Inc42, “I think the ecommerce SaaS/enablement market will always have multiple players catering successfully to various industries, seller segments and geographies. Even today there are over 500 active shopping cart platforms across the world. No one shopping cart has a dominant market share. So it’s not a winner take all.”

Nizam adds another advantage Zoho has from a business point of view. “We are bootstrapped while many players are working under the tremendous pressure of VC money. So we are really well positioned to emerge as a leader,” added Nizam.

So far, Indian SaaS product creators have thrived on the international market, but not in India, where they’re actually located, given the resistance to self-service software and long sales cycles. This is fast-changing – the overall ecommerce market is expected to grow more than 2X to $50 bn by 2020 – so Goel and Zoho’s Nizam have a point when they say competing platforms can serve the burgeoning user base with their unique needs.