India Has A $50 Bn Potential Online Commerce Market, And 11 Startups Are Already Tapping Into It

India Has A $50 Bn Potential Online Commerce Market, And 11 Startups Are Already Tapping Into It

The projections are made on basis of a joint study by Bain & Company, Google, and the Omidyar Network

Several challenges are required to overcome by both government and users 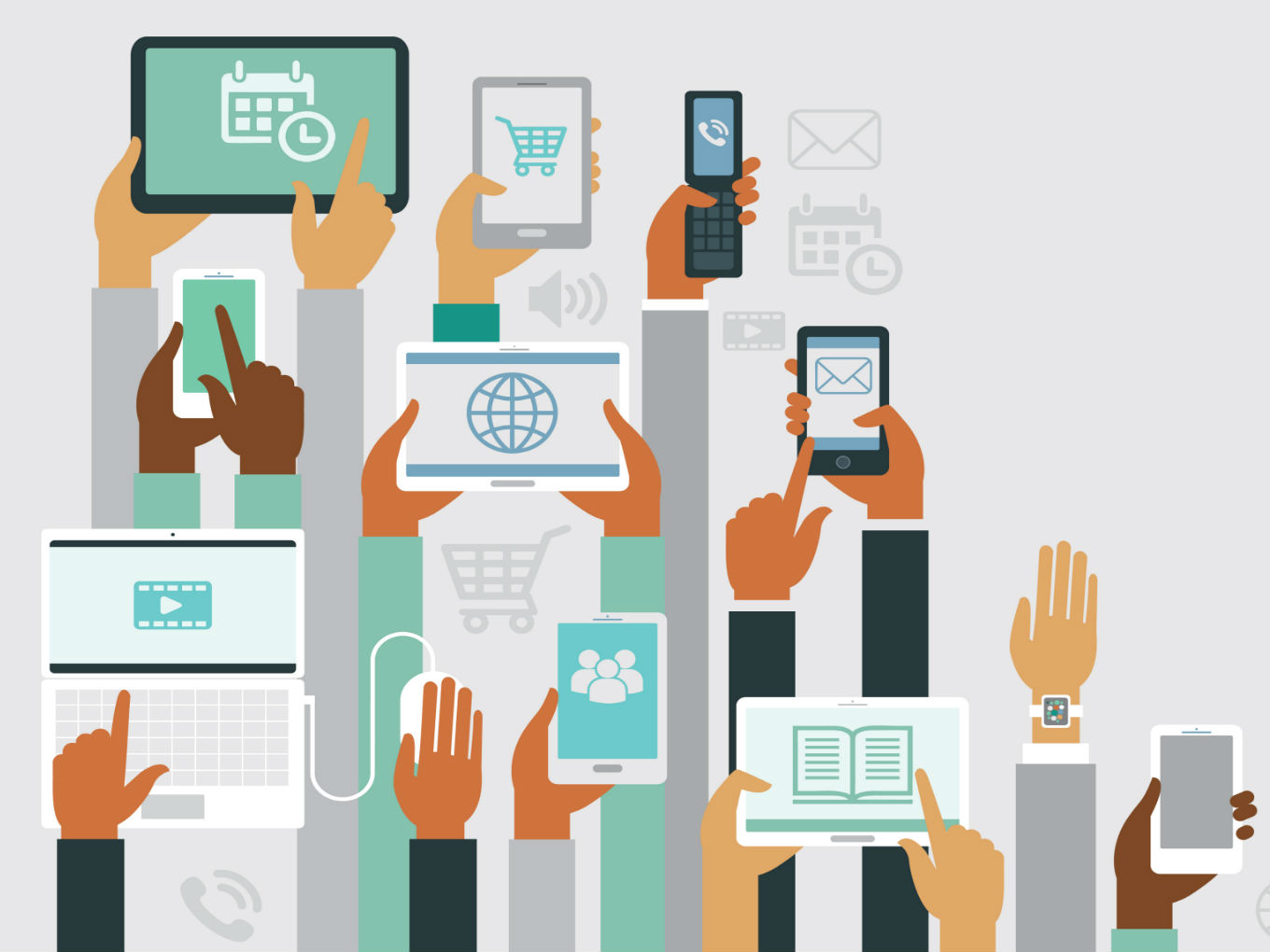 India’s 500 Mn internet users have the potential to unlock more than $50 Bn worth of transactions in online commerce in the country, said a joint study by Bain & Company, Google, and the Omidyar Network.

According to the report, it would take anywhere between three to five years to reach this target as there are many challenges that need to be overcome — not just in bringing more people online but also in converting online users into transacting users.

The report, entitled ‘Unlocking Digital for Bharat: $50 Billion Opportunity’, has further highlighted 12 Indian startups that are already taking up initiatives to tap into this growth potential in the near future, much ahead of its global counterparts and fighting existing hurdles. Some of them are HotStar, BYJU’s, BookMyShow, Ninjacart, and Zoho.

What Are The Challenges In Unlocking India’s Online Commerce Potential?

One major challenge in unlocking this $50 Bn worth potential in online commerce is the decrease in consumer willingness/ability to spend online in the medium term due to low GDP per capita.

“This will force businesses to find frugal and innovative ways to sustain and wait longer for scale; at the same time, businesses should consider alternate monetisation approaches beyond consumers,” the report said.

Apart from this, the large variation in Internet access across demographics in India as depicted below is also a cause of concern.

Further, according to the report, it takes three to four months for a typical Internet user to make the first online transaction. However, a large number of users — 54 Mn — stopped after the first online purchase due to issues with the user experience.

The report mentions a number of global startups and companies that have played a crucial role in bringing the countries all over the world online.

For instance, in China, companies such as Alibaba, Tencent, Baidu, TrustPass, Kudo, Hema Supermarkets, and DaDaABC, among others, are leading the charts.

According to the report, the Indian startups taking the growth of online commerce to next level include names such as:

Ninjacart: A tech-enabled B2B marketing platform, Ninjacart reduced intermediaries in the agricultural value chain and improved efficiency. It has worked to remove layers of middlemen between suppliers (farmers) and consumers (retail stores), additionally providing value-added services as well as improve transparency in payments.

HotStar: Digital and mobile entertainment platform Hotstar is building a large user base with a freemium model and complementing it with a membership-based model. The company is capitalising on its strong growth — it saw 1 Mn downloads within six days of its launch in 2015, boasted a subscriber base of 350 Mn as of February 2018, and 100,000+ hours of TV content and movies across nine languages at present.

BookMyShow: Online movie and events ticketing service BookMyShow provides a clear customer proposition — convenience — and is now charging for it. It changed the face of the ticketing system in India and has recently spread its event ticketing business to the international market. The company currently boasts 50 Mn+ app downloads and sells 15 Mn+ tickets per month, holding an 80% share of online entertainment ticketing in India. It offers tickets for 5,000+ screens in 650+ towns and cities in five countries.

BYJU’S: India’s largest edtech company BYJU’s integrates offline and online education channels with personalised solutions and content creation as levers. With 90% annual renewals, 700K paid subscribers, 15 Mn downloads, and a presence in 1700+ towns and cities, BYJU’S is the most trusted interactive learning mobile app in the country, as per the report.

Zoho: Zoho provides a cohesive set of applications to run an entire business on the cloud. The pay-as-per-use model allows SMEs to scale up without a high upfront investment. It has 30 Mn+ users with a strong presence in India and has also expanded to the US and Europe.

Udaan: Udaan connects SME manufacturers and wholesalers with retailers online, provide logistics, payment, and technology support. It is empowering small businesses to connect with retailers online. It currently delivers to 500+ cities across India and has sellers in 80+ cities. It further claims to have strong commercial momentum: customers purchase ~7 times a month with a conversion rate of up to 40%.

NowFloats: The startup provides small and medium-sized businesses, a platform for their websites. It creates interactive business websites with end-to-end services and works on a fixed annual subscription fee model with significant discounts for long-term subscriptions. It is operational in 40 cities in India and is increasing its presence in Tier 3 towns. It is present in five countries — the US, UAE, Hong Kong, the Philippines, and India, and has 250K+ businesses launched online globally with 11 Mn+ unique visitors a month.

IndusOS: It is a regional operating system for mobiles, made for smartphones customised for Indian needs and for other emerging markets. It powers the digital needs of users through a contextual interface. For example: it can help make Ola available in 12 regional languages, catering to 95% of the Indian population. It has a user base of 10 Mn+ at present.

DailyHunt: A news and local language content application, DailyHunt targets the mobile audience. It uses machine learning and deep learning technologies for smart curation of content defined by language, location, interests, and other demographic variables. With 155 Mn app installs and 50 Mn+ users, it offers 100K news articles in 14 languages licensed from 800+ publication partners every day. It has also launched Newzly, a news-in-brief app for Android users.

Pratilipi: This is a platform to discover, read, and share stories, poems and books in local languages. It is operational in eight local languages. Wth 1Mn+ downloads on Play Store, it has 150K+ content pieces published by 22K+ authors. Also, it has a large penetration among women, with 71% of the readers and 40% of the writers being women.

India Vs Global: The Untapped Potential And Lessons To Learn

India has the second-highest number of active Internet users — 390 Mn — globally (graph below). The number holds a great amount of untapped potential for online businesses. 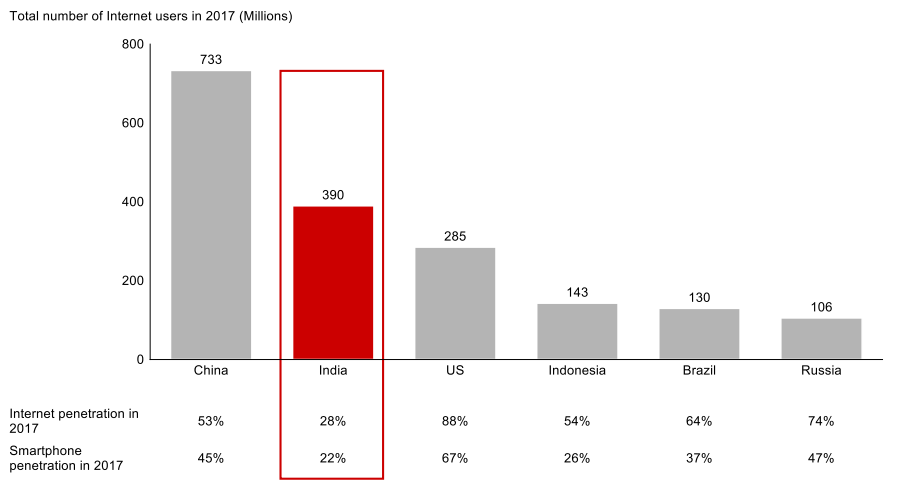 However, compared with China and Brazil, India lags behind in Internet penetration — it has 28% compared with 64% in Brazil and 53% in China. The good thing, however, is that India’s user growth has been the highest: more than 40 Mn new users added on average every year since 2013.

In order to improve upon these globally adopted metrics, the report suggests online commerce players to take the following measures:

Four Themes That Will Drive Online Commerce In India

In order to drive awareness, usage, and transactions among the current and next set of Internet users in India, the report considers the following four will be the key themes to follow in the near term:

This will create access, awareness, and literacy, enabling 370 Mn people in different segments to come online. It must be noted that India already has major initiatives taken by the government and private firms to build infrastructure and improve access and affordability of the Internet.  This includes initiatives such as BharatNet, i2i, Jio, and Internet Saathi.

Building locally relevant solutions across content and use cases will drive user engagement in the country. According to the report, this will be the key to unlocking 130 Mn new users by doubling Internet penetration in rural areas and also to increase participation of women.

Create an ecosystem for the self-employed

This will help the country diversify and augment income of individuals via digital and will influence nearly 40% of the workforce across 46 Mn micro, small, and medium enterprises.

Strengthening trust will help improve purchase consideration, transaction, and retention. This can be done through an omni-channel presence, reinforcing product quality in brand messaging, and assuaging concerns on product returns by redefining return policies and messaging around them.

The report essentially reflects the fact that India is currently at a critical stage in its digital journey, with substantial growth potential in both online usage and transaction. By removing the above barriers, instituting a better user experience, online platforms will be able to improve users’ trust in online commerce, thereby unlocking the potential $50 Bn online commerce business.