Women In Tech: 7 Ways Women Entrepreneurs Can Lead The Ecosystem

Women In Tech: 7 Ways Women Entrepreneurs Can Lead The Ecosystem 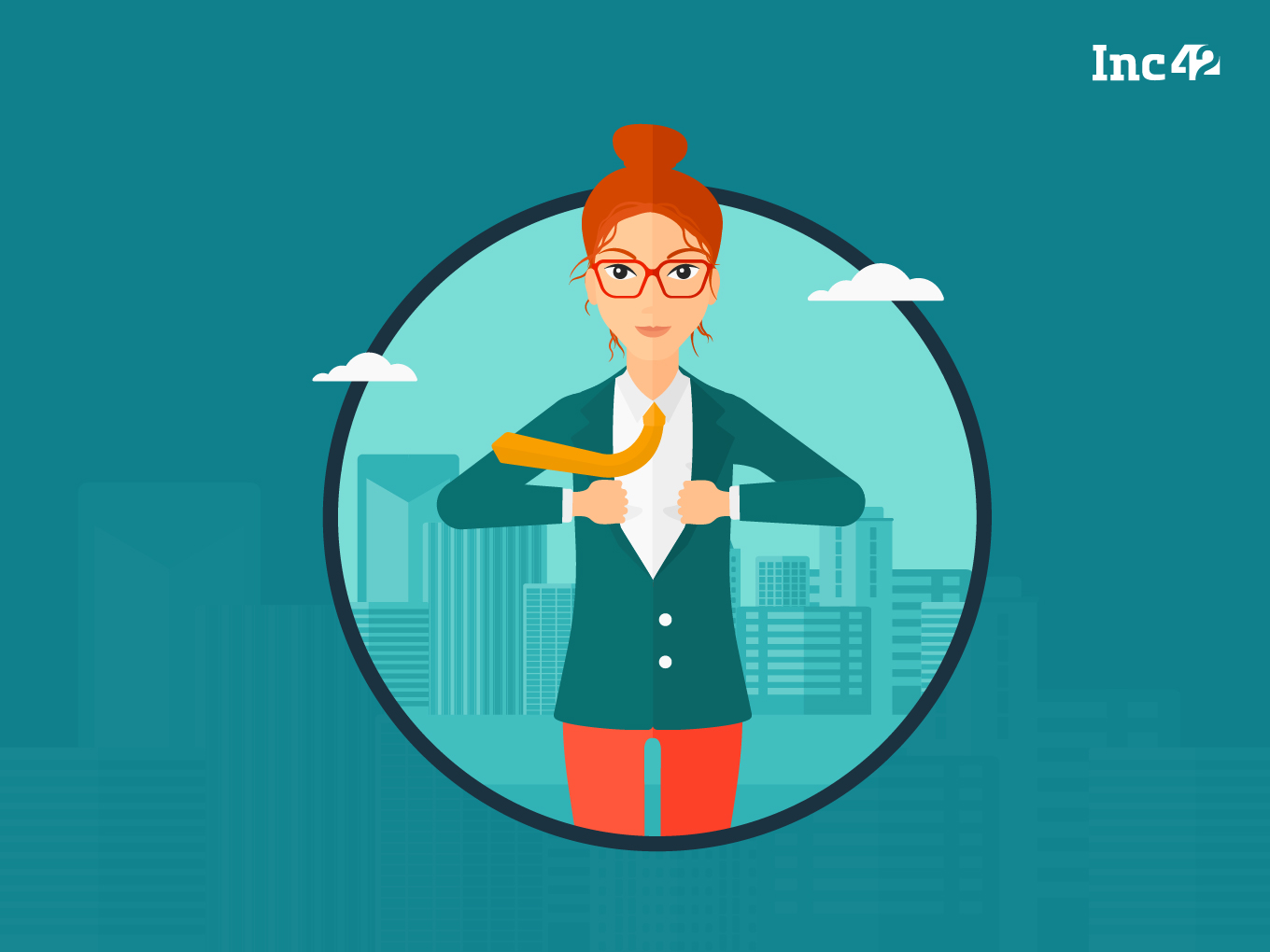 Wearing several hats, women in tech are constantly attempting to outdo past generations

If we say, the tech world is still a man’s world, very few would disagree. According to research firm Statista, female employees make up between 27% (Microsoft) and 47% (Netflix) of the workforce at major tech companies, with the percentage dropping much lower when it comes to actual technology-related roles. The number is even lower when leadership positions are considered in tech companies. For women workers, the funnel gets narrower and narrower as they progress in their careers.

India is ranked 52nd out of 57 surveyed countries, which is quite a dismal score in the index of women entrepreneurs. According to a World Bank Enterprise Survey, the percentage of women in leadership positions in 2014 was as low as 9%. The fact that few women own companies are part of a larger phenomenon of weak engagement of women in business.

Yet, the impact is there. Wearing several hats, women are constantly attempting to outdo themselves and shatter the glass ceiling. While names like Kiran Mazumdar-Shaw, Arundhati Bhattacharya, Rekha M. Menon, are seen as role models in the IT domain, the Indian startup ecosystem is not untouched by this wave of change as well.

“Although the ratio of women tech founders in India is less than 10%. But comparing India and other countries, women are less in technology everywhere and that is just a function of various things. Indeed the fact that yes, women opt to study technology, makes the funnel much bigger,” said CashKaro cofounder Bhargava.

On this International Women’s day, we tapped the thoughts of some of these women leaders, entrepreneurs and investors. Away from the topic of gender equality in business, many women entrepreneurs believe in having the equal opportunity as their male counterparts at all levels and they say only women can change the world for the better —  by embracing the power they hold within.

Here are seven ways women leaders in India believe that the future generation of women can lead the way in the tech ecosystem.

According to Bridgelabz Survey, women participants face challenges in landing tech jobs due to a lack of hands-on experience for coding (40%) and are low on confidence (33%), while these figures stood at 38% and 31% for men. Its time women should work on themselves, gain confidence and be ambitious enough to do enough hard work to be able to deliver.

Typically, women tend to doubt themselves more than men, when it comes to technology or technology-related roles, according to some of the founders we spoke to.

At most tech companies that are led by women founders or have femaler co-founders, very few are involved directly into the tech team. Niramai cofounder Manjunath shared a wonderful example here.

As she described it, in 2010, she came with a beautiful idea while working for a multinational company. The pilot was successful and CTO asked her if she wanted to pursue this as a startup venture. He was ready to give all the support and even willing to give the job back if things didn’t work out.

“But I refused as I didn’t have the confidence to take up that opportunity. It was only after eight years, I could gain confidence and listened to my inner voice to start Niramai. The control of taking on something that you don’t know is something that is lesser comfort is less in women and I think that is something we have to develop.” – Niramai cofounder Geeta Manjunath

Women in the technology sector are mostly under-represented, especially in sales and leadership positions due to aspects like long working hours, networking demands and frequent travelling. Even for those already in leadership roles, women are often required to justify their position to secure a place at the table, to voice their opinions or even to make a difference. It takes much more effort for them to get heard than what is required of their male counterparts. But this is not something to consider as a roadblock.

“My message to all the potential women out there is to develop an authentic style and be the best version of yourselves. We have the ability to be sustainably authentic and repeatedly successful. There are so many successful women leaders outside tech who have defied the odds in their own style. So, why not the women in tech?” – Suganthi Shivkumar, Managing Director for Qlik ASEAN, India and Korea.

Find Your Way Out


Swati Lad, cofounder and CMO, Creditmate believes gender bias is one of the biggest challenges which women face in India. Though it may be an unconscious action, it is still prevalent and more deeply rooted in the tech community, due to the low ratio of female participation in such groups.

Many of the times, women leaders find themselves as a ‘single lady’ at tech events. At such moments, there is no point in saying they’re not listening or they are treating unequally. The only way out here is to do things differently. It’s time that women entrepreneurs start by not thinking of them as women entrepreneurs but more as just entrepreneurs.  Women are strong enough and have a lot of potential, so they need to stop thinking themselves as weaker and that they will be ill-treated.

“There is an inherent prejudice against women’s inability to manage work life. I for one have been asked multiple times how do I manage with a three-year-old. This implies women in this fieldwork harder to find a seat at the table which in a way enriches them and helps them much better in the longer run.” – Swapna Gupta, Director, Qualcomm Ventures.

Support The ‘Other’ Women

One entrepreneur supporting another entrepreneur is certainly the key to success. Unlike the traditional times, women today have a lot many platforms to reach out for help. There are a lot of siloed activities e.g few programs being run focused on women founders by corporates; initiatives run by the government of India.

Launched in 2018; the Women Entrepreneurship Platform (WEP) is a government initiative by NITI Aayog to support aspiring and existing entrepreneurs across the country. Last year, NITI Aayog also partnered with messaging platform WhatsApp to help women realize their entrepreneurial dreams. Some Angels/funds have also consciously chosen to see an equal number of women-founded companies to ensure funnel is fixed.

The best possible way in which women in leadership roles can support each other is by identifying and appreciating their achievements. They should wilfully shed biases to invite more women in managerial roles.

“Established women leaders or entrepreneurs further contribute by mentoring the potential entrepreneurs by share their knowledge, experiences and challenges. This will encourage more women to step out of their comfort zones, set ambitious goals and take positive steps towards thriving in this male-dominated business ecosystem.” – Divya Jain, founder, Safe Educate

The number of women in tech, as well as entrepreneurship, has been low for years. At the intersection of both, the number of women that are deeptech startup founders is infinitesimally small. This makes the exchange of information and networking even more difficult. Most tech meetups are dominated by male counterparts. As compared to the West, the Indian men are more reserved which makes the situation even more challenging for the women entrepreneurs

“As women in tech, we need to be proactive in working and developing the strength of hustling. The word hustling is the main quality of an entrepreneur to go make connections, network and create the opportunities in business development.” – Geeta Manjunath, Niramai


Become Your Own Role Model

India is still at the early stages of breakout compared to other regions and hence there are not enough role models to look up to when it comes to women in tech. Its time to fix that and Mahima Kaul, cofounder, Coutloot comes up with beautiful advice here.

“As a young woman entrepreneur, I did not have a lot of role models to look up to, as compared to my male counterparts. Thus, I decided to become my own mentor/ role-model/ cheerleader. It’s a challenge, but women are now succeeding and fighting against the bias, and have tactfully dealt with them. The human biology does not define your skill or perseverance but the fight to be better does.”

Take A Cue From West

As highlighted by the International Finance Corporation (IFC), 15% of women in China are senior investment professionals in the private equity and venture capital space, while the percentage of such women in India is just 7%. In the technology domain, the percentage of women in senior, mid-level and junior levels were 11%, 20%, and 38%, respectively, as per a study by Zinnov.

The stark difference between India and a developed economy like China can be attributed to a skewed gender ratio, prejudice against women and perennial sexism. However, what remained static for so many years is gradually changing now with more and more women taking up leadership roles in various technology firms. This is an opportunity Indian women leaders should not miss.

“Despite being highly competent and skilled in their respective jobs, 82% of women in the country’s tech sector feel unheard. However, things are now changing. It’s no more a man’s world. Even if it is, we can change it, slowly but surely.”~ Padmaja Ruparel, founding partner, IAN Fund.

Many believe that things become difficult for women because they have to share the twin load of both work and home responsibilities. However, thinking it from the other way round will come to a realisation that India is much more accommodating for a women’s aspirations given the family support fabric that it provides.

Everywhere in the world, there are biases towards women in tech, and women being able to build good tech-led products. We still need to grow the pipeline of women tech founders, product managers and professionals in a big way. Like Sheroes founder Sairee Chahal says, we need more informal conversations around all aspects of the entrepreneurial journey – right from the whys, challenges to fundraising and more.

“Women investors looking to invest in women-led businesses is a growing trend, and this can spawn new businesses that need not just funding but mentorship and thought partnership from investors. But we need to trigger conversations in schools, colleges, and early on in the formative years to strengthen the roots. Evolving the mindset towards women-focused tech products takes time, but we are up for the challenge.” – Sheroes founder Sairee Chahal