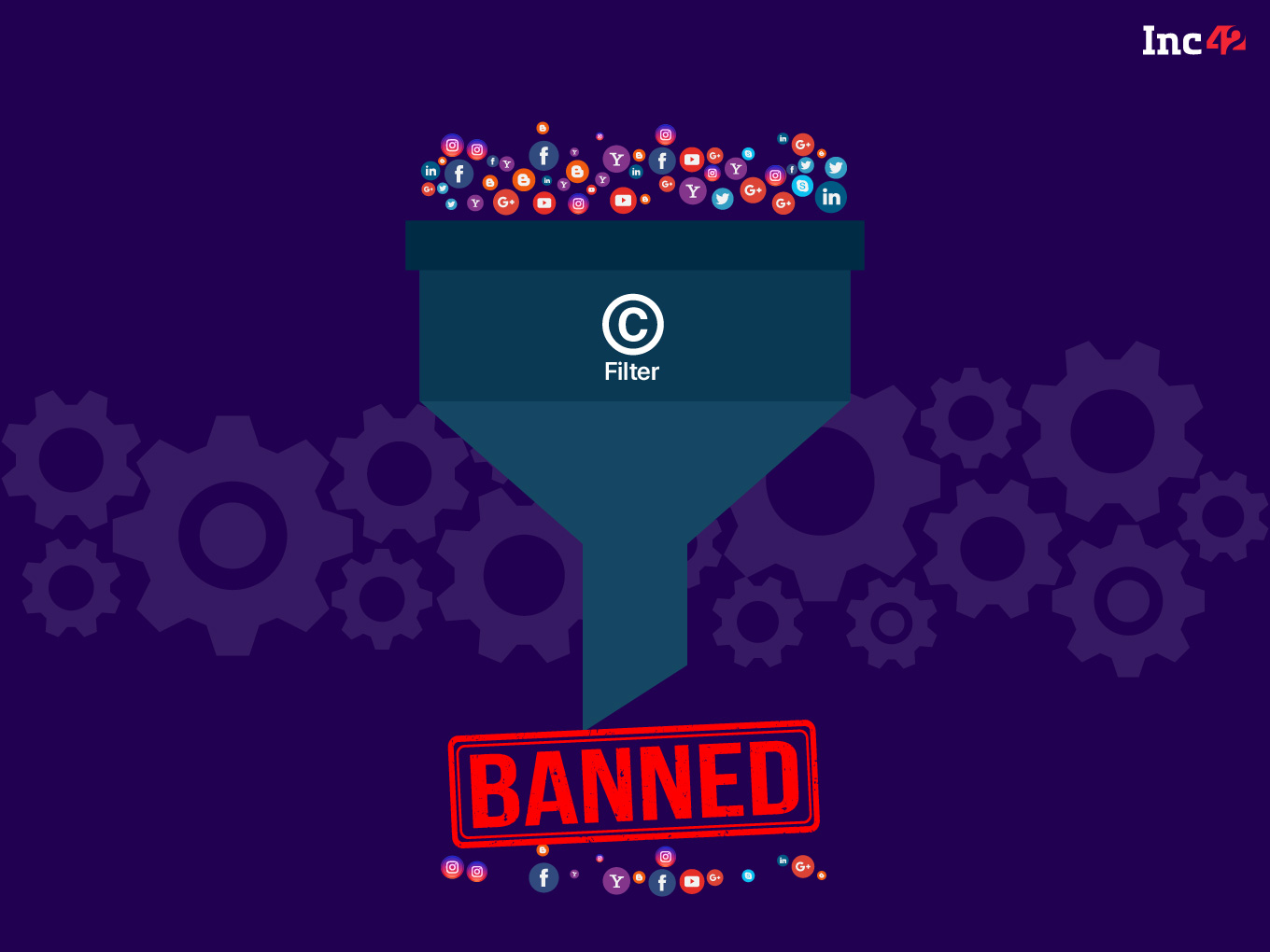 • In a bid to encourage startups and innovation, the EU’s new copyright directive exempts small and micro platforms from its rules
• Article 11 — the ‘link tax’ — requires Google, Facebook & Twitter-like platforms to pay authors and publishers against their links shared on these platforms
• Article 13 — the ‘upload filter’ — requires Google, Facebook, Youtube, etc to stop users' sharing of unlicensed copyrighted content on their platforms

As Youtubers, bloggers, and Facebook, Linkedin, Twitter, and Instagram users, most of us have read, liked, and shared content — songs, videos, photos, memes, jokes, poetry, articles — from various sources. Many of us have even spent hours creating memes from famous movies, books, songs, etc, and sat back and smiled with satisfaction when they’ve gone viral. Well, soon all these memes, jokes and other content could be taken down, as their sharing infringes the copyrights of the creator according to the latest copyright directive approved by the EU’s Legal Affairs Committee.

After the European Union (EU) regulated the collection, storage and usage of personal data through the General Data Protection Regulation (GDPR), it is set to dictate the terms on which the Internet operates by curbing the freedom to share content on digital media platforms.

On September 12, the EU green signalled its revised copyright directive, formally called The Directive on Copyright in the Digital Single Market 2016/0280(COD). Articles 11 and 13 of the directive, widely and critically known as ‘Link tax’ and ‘Upload filters’, seek to rein in digital media platforms by putting conditions on what content can and cannot be shared on them.

Interestingly, earlier on July 5, the EU had rejected the controversial directive with 318 Members of European Parliament (MEPs) voting against the Directive, compared to 278 favouring it. However, in the second vote (September 12), the digital copyright directive was approved by 438 votes against 226, with 39 abstentions.

However, the draft legislation has to face the third round of voting — the final one — scheduled in January next year, before it gets implemented.

Julia Reda, who sits on the EU Committee on Legal Affairs (JURI) and is a substitute member on the Internal Market/Consumer Protection (IMCO) and Petition (PETI) committees, besides being a member of the delegation for relations with the US and India, opined, “The directive proposals would limit our ability to actively participate online to benefit the business models of media conglomerates: Upload filters on internet platforms, a ‘link tax’ for news content and a very narrow exception for text and data mining would curtail how we can share links, upload media and work with data.”

The copyright reform was tabled by the European Commission (EC) on September 14, 2016, as part of the Digital Single Market strategy. The Council of the European Union agreed to adapt the EU copyright rules to the digital environment in May 2018. On September 12, the directive received a positive vote in the European Parliament. Trilogue discussions between the co-legislators on the matter will begin soon. The new rules can come into force only after an agreement is arrived at and the directive officially adopted.

Article 11 of the Copyright in the Digital Single Market directive makes sharing platforms such as Google (Google News), Facebook, and Twitter liable to pay to the original content authors publishers each time they use the headlines and links of these authors.

Article 13 of the directive requires digital media platforms such as Facebook, Twitter, and Youtube to stop users sharing unlicensed copyrighted material, barring making some exemptions for non-profit organisations such as Wikipedia and Github.

Across the world, Internet content is shared and uploaded widely regardless of its geography of origin. Hence the EU’s directive on Copyright in the Digital Single Market is bound to affect India’s Internet space as well as its users.

The directive will not only affect the potential reach of all such content, but will also discourage people from creating memes and jokes with content — think lyrics, dialogues, quotes — and images borrowed from elsewhere.

Speaking to Inc42, Parveen Singhal, co-founder and chief content officer at content marketing platform WittyFeed, said, “Indians are by nature outspoken and love coming up with such humourous content. Our inboxes are loaded with memes, jokes, and funny content pieces that are published on these platforms. However, this directive is a direct challenge to the open world and open Internet and shouldn’t be implemented.”

He added that the provisions of the draft EU copyright law challenge a fundamental digital right by asking platforms to restrict such content.

However, an amendment made to Article 11 says that the above rights under articles 2 and 3(2) of Directive 2001/29/EC will not prevent the legitimate, private and non-commercial use of press publications by individual users.

In another significant amendment of Article 11, the expiry date of the rights has been reduced from earlier mentioned 20 years to five years. Also, it has been clarified that the rights shall not apply with retroactive effect.

Article 13 — ‘Use of protected content by information society (now, made to online content) service providers storing and giving access to large amounts of works and other subject-matter uploaded by their users’ — of the directive has been rewritten entirely with significant changes.

The amendments to Article 13 say that in cases where right-holders do not wish to conclude licensing agreements, online content sharing service providers and right-holders will cooperate in good faith in order to ensure that unauthorised protected works or other subject matter are not available on their services. Cooperation between online content service providers and right-holders will not lead to preventing the availability of non-infringing works or other protected subject matter, including those covered by an exception or limitation to copyright.

The amendment favours further constructive dialogues between the EU member states and the stakeholders to harmonise and to define best practices and issue guidance to ensure the functioning of licensing agreements. It also favours dialogues on cooperation between online content sharing service providers and right-holders for the use of their works or other subject matter within the meaning of this directive.

The amendment also adds that while defining best practices, special account will be taken of fundamental rights, the use of exceptions and limitations, as well as it will be ensured that the burden on small and medium-sized enterprises (SMEs) remains appropriate and that automated blocking of content is avoided.

While its Articles 11 and 13 that are creating all the buzz since September 12, the EU Directive on Copyright in the Digital Single Market needs to viewed in its entirety. The directive will not only affect digital media platforms but also other content-producing platforms, as it guides the way content is being quoted, used, and reproduced.

The directive clearly mentions that the Articles will in no way affect the ongoing research, innovation, education and journalistic practices. However, in an amendment to Recital 16 of the directive, it has been clarified that exceptions or limitations of use can be granted as long as the work or other subject matter used indicates the source, including the author’s name, unless that turns out to be impossible for reasons of practicability.

Another amendment to Recital 46 says, “Any data processing under the copyrights directive must be in line with the Fundamental Rights of the European Union and in compliance with Regulation (EU) 2016/679 and Directive 2002/58/EC. The provisions of the General Data Protection Regulation (GDPR), including the “right to be forgotten” should be respected.”

Does The EU Copyright Directive Achieve Its Intent?

According to the copyright directive proposal presented in the EU parliament on July 5, the goal of the copyright directive is to protect original content and make sure that artists, notably musicians, performers and script authors, as well as news publishers and journalists, are paid for their work when it is used by sharing platforms such as YouTube or Facebook, and news aggregators such as Google News.

On September 12, after the positive vote, Axel Voss, an MEP from Germany and a member of the European People’s Party (EPP) said, “I am very glad that despite the very strong lobbying campaign by the internet giants, there is now a majority in the full house backing the need to protect the principle of fair pay for European creatives.”

Voss claimed that the amended draft copyright law addresses the concerns raised about innovation by excluding small and micro platforms or aggregators from the scope.

“I am convinced that once the dust has settled, the internet will be as free as it is today, creators and journalists will be earning a fairer share of the revenues generated by their works, and we will be wondering what all the fuss was about,” said rapporteur Axel Voss.

Although Google and Facebook are making huge money from their ad businesses, there are major doubts whether link sharing, which generates large amounts of Internet traffic, can be a profit-sharing model as well. According to the copyright directive, since ad revenues are largely dependent on the traffic, driven by content sharing, the revenue raked in by Internet companies could be interpreted as indirect revenue and, thereby, publishers and authors should be liable to be remunerated for the same.

The directive adds that these benefits should include “indirect revenues”. This move would also empower authors and performers to revoke or terminate the exclusivity of an exploitation licence for their work if the party holding the exploitation rights is deemed not to be exercising this right.

Singhal said, “Articles 11 and 13 are progressively-regressive. The copyright directive is meant to protect content creators, but still it puts platforms like Facebook and Youtube into the question box, although they’re certainly not responsible for the content being uploaded or shared by users. Becoming the ‘content police’ and not allowing content to be shared because of its unforeseen negative impact will not only hamper the open nature of humour that was coming in the form of user-generated content (UGC), but will also deal a big blow to professional content creators by not allowing their content to be shared widely.”

The good news is that the new text (directive) approved by the EU includes provisions to ensure that the proposed copyright law is implemented online without unfairly hampering the freedom of expression that has come to define the Internet. Thus, merely sharing hyperlinks to articles, together with ‘individual words’ to describe them, will be free of copyright constraints.

The amendments to the copyright law also specify that uploading content to online encyclopaedia — such as Wikipedia, or open source software platforms such as GitHub — in a non-commercial way will automatically be excluded from the requirement to comply with copyright rules.

Although by excluding startups from its provisions, the directive has addressed certain concerns raised in the initial proposal, since Facebook, Google, Twitter, and Youtube are the primary sources of content sharing the world over, the directive on the Copyright in Digital Single Market will undoubtedly affect the reach of content as well as its availability to the user, thereby limiting the scope of these digital media platforms.

However, as Voss said, the effect could be temporary and, for all we know, once the dust settles, the Internet and users may be able to adapt to the changes.

In India, where Internet speeds, despite the huge number of users, is very slow compared to the west, the damage of the EU’s new copyright directive could be great. Imagine this scenario — you upload a picture on Instagram and it says it will take another 34 hours to validate whether it violates the copyrights rule or not!