[What The Financials] IPO-Bound Fino Turned Profitable In FY21, But Expenses Remain High

[What The Financials] IPO-Bound Fino Turned Profitable In FY21, But Expenses Remain High It has significantly reduced employee expenses over the past three fiscals

A deep dive into its numbers show that while it has done well operationally, the pandemic wreaked havoc on its customer base which has impacted collections or deposits.

The company recently filed its draft red herring prospectus (DRHP). The initial public offering (IPO) issue includes a fresh issue of equity shares aggregating upto INR 300 Cr and an offer for sale (OFS) of up to 1.56 Cr equity shares. Backed by marquee investors such as ICICI Bank, Intel Capital Corporation, International Finance Corporation, Blackstone and BPCL, among others, Fino is aiming to raise around INR 1,300 Cr via the IPO.

Founded in 2007, Fino PayTech Limited on September 7, 2015, was granted an in-principle approval to set up a payments bank and it commenced its operations t from June, 2017. Fino competes with other similar payment banks operated by India Post, Bharti Airtel, Paytm, NSDL and Reliance Jio.

Fino claims its focus on technology throughout the banking and financial services chain is a significant factor in improving its operating performance, as it allows the company to have high gross margins and reduce variable costs. Here’s a look at how it has fared operationally so far.

Fino Payments Bank Is Profitable But…

The primary drivers of Fino’s revenue are the fees and commissions that its charges for products and services. It offers cash management systems (CMS), recharges, bill payments, third-party business correspondents (BC) services to offer banking solutions on behalf of other banks, ATM or debit cards among others.

The payments bank reported 14% growth in total income in FY21 at INR 791 Cr compared to INR 691 Cr in the year ago. This growth was led by a 11% increase in commission, exchange and brokerage from transactions across microATMs, AePS, CMS and current and savings accounts (CASA). However the company noted that it lost business from remittances and cross-selling of financial services during the pandemic related lockdowns due to a large share of the migrant population going back to their home locations.

It also reported a 40% jump in miscellaneous income INR 95.8 Cr due to onboarding of over 145,000 new merchants on its platform. Merchants pay Fino for equipment, training and onboarding processes.

Covid-19 lockdowns and other restrictions negatively impacted domestic remittance during March 2020, which resulted in a 37.0% decrease of income on a month on month basis. 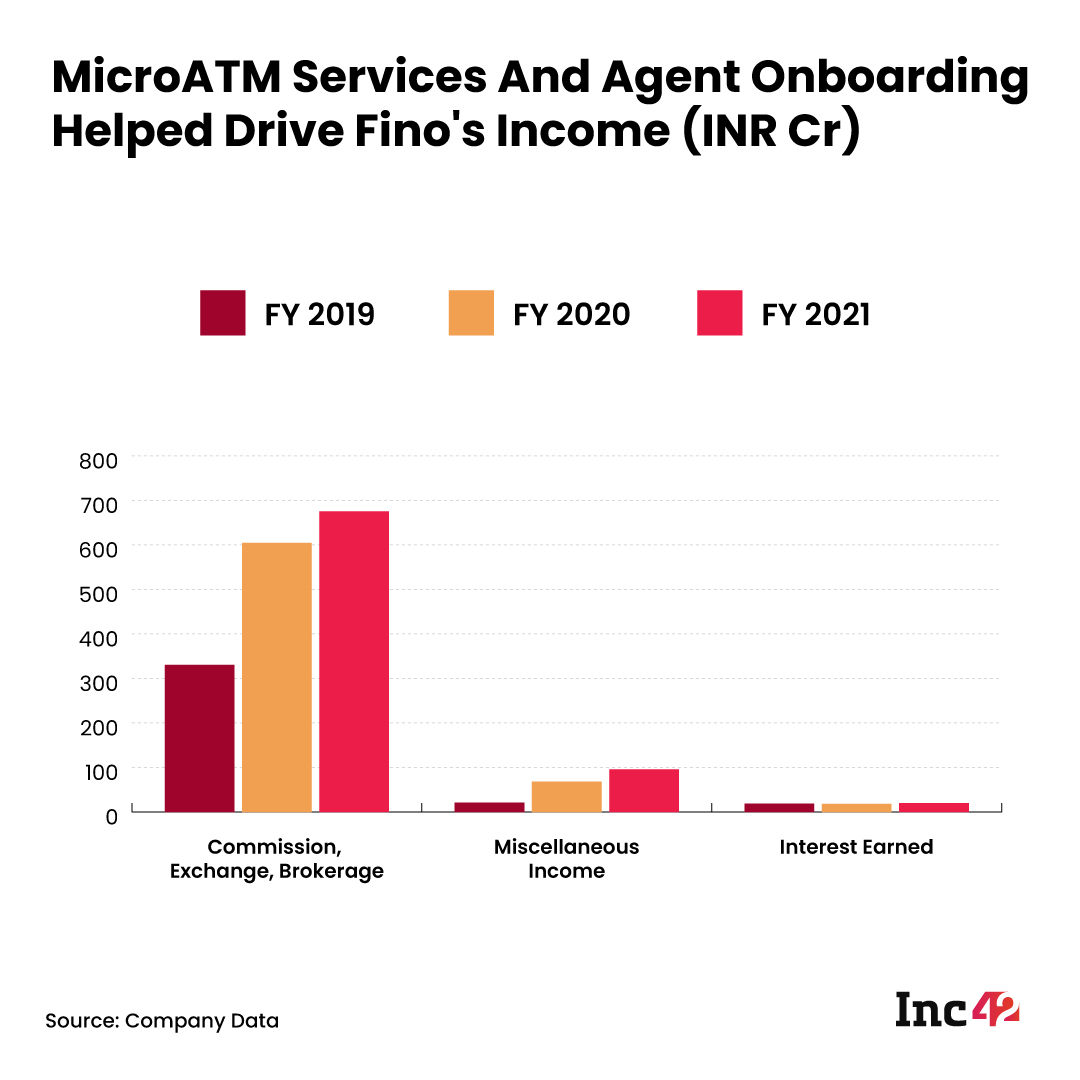 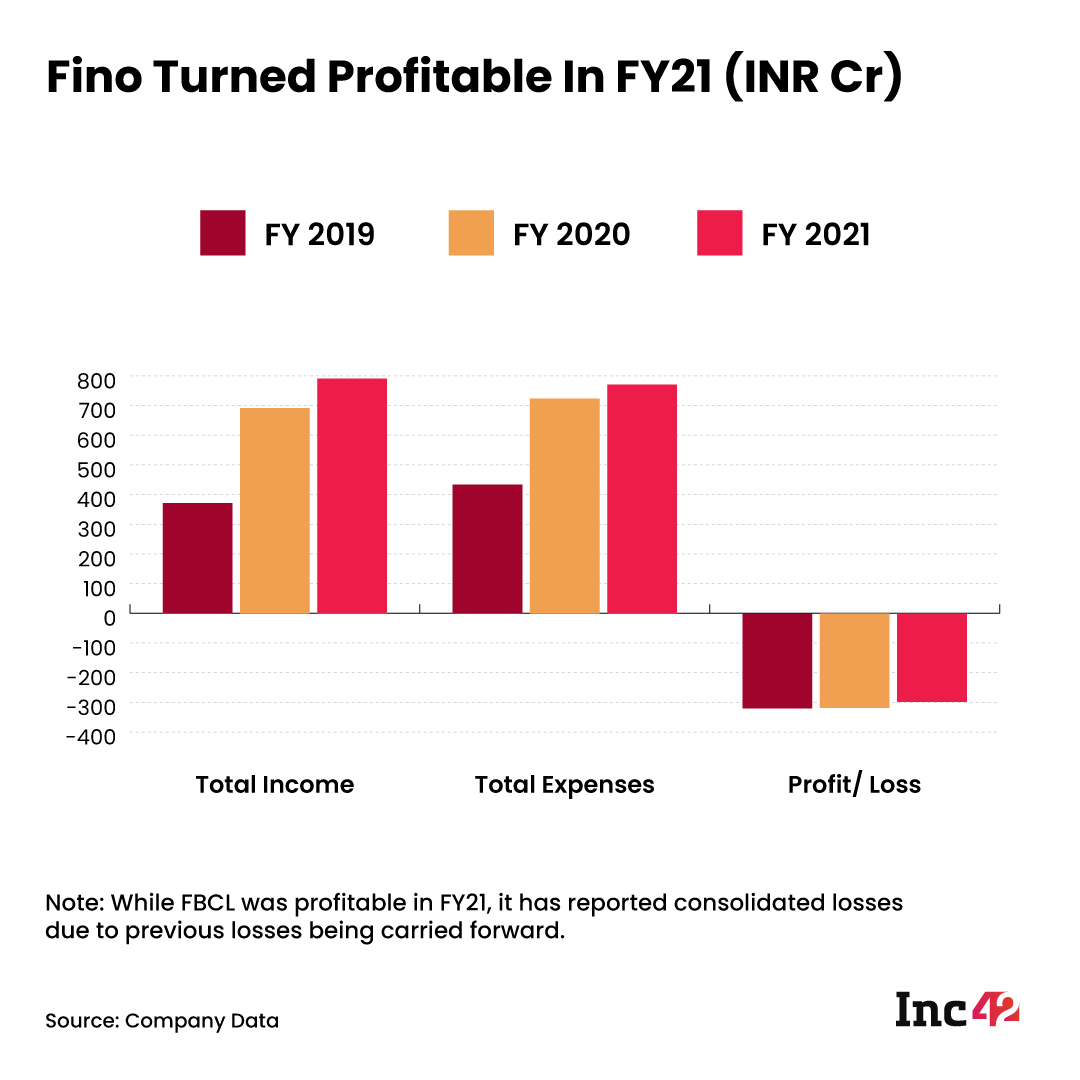 Labor expenses represent a large share of Fino’s operating expenses. But this has cut significantly in recent years from 29.3% of the total expenditure in FY19 to 17.1% in FY20 and 14.9% in FY21. It also reduced its employee count by almost 150 during the last fiscal year.

Some expenses were curtailed due to lower bonus payouts in FY21 as well as lower utility and rent expenses during the fiscal. Fino has not shared a breakup of its advertising and marketing spends in FY21 although it had gone up 68% to INR 7 Cr in FY20. 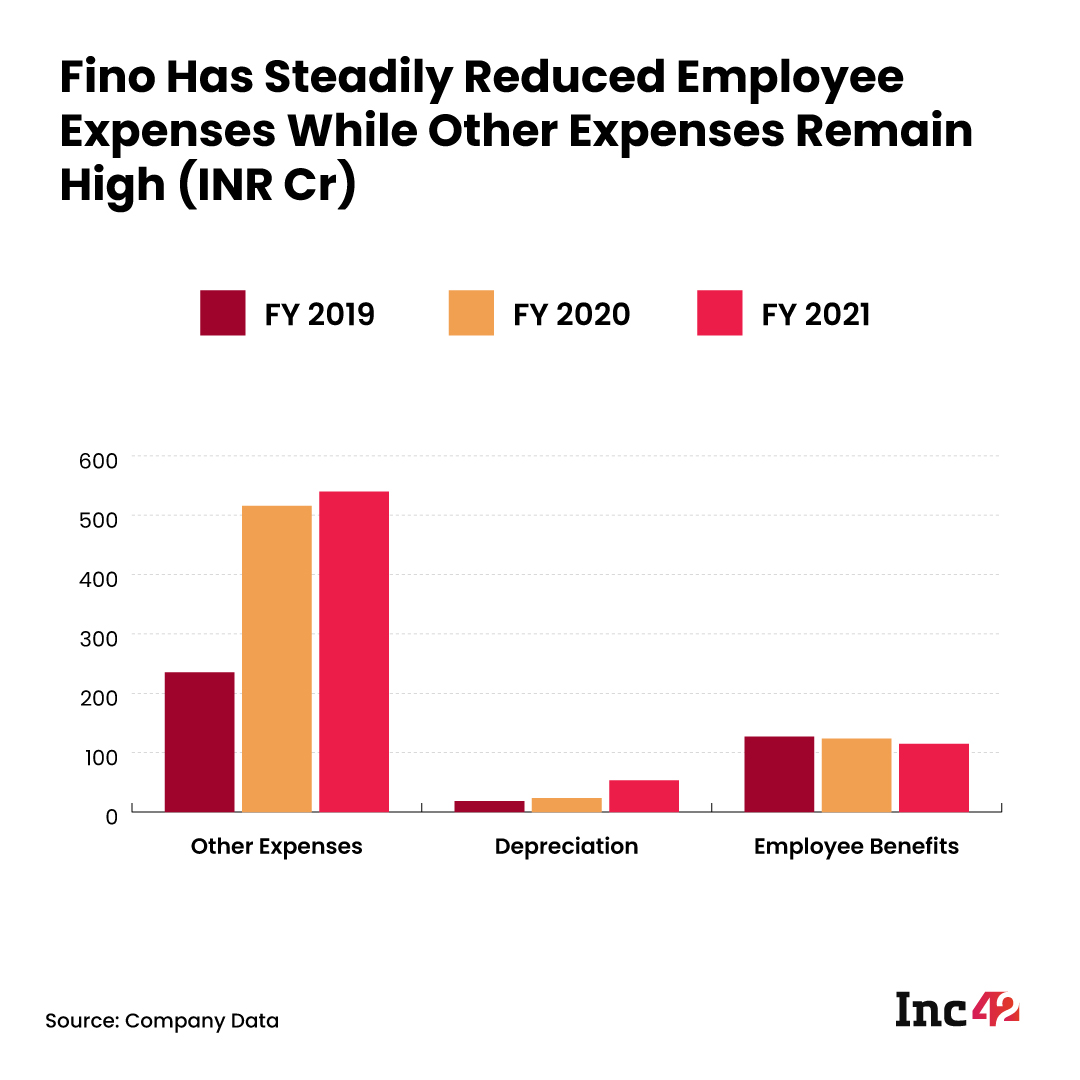 The bank said it has the largest network of micro ATMs as of March 2021, with a market share of 55% along with a network of 6.4 Lakh merchants and 25.7 Lakh accounts. In FY21, the payments bank processed and facilitated more than 434 Mn transactions having a gross transaction value of INR 1.32 Lakh Cr.

Credit rating firm CRISIL estimates the addressable market for an entity focused on providing CASA deposit accounts in rural and semi-urban areas and the entire range of payment and remittances related services across urban, semi-urban and rural areas to be approximately INR 85,000 Cr in financial year 2021.

The credit ratings agency projects the payments banks market to grow at a CAGR of 16% over the next four years to reach INR 1.57 Lakh Cr by FY25, largely driven by strong growth in the payments space due to technology and changing consumer behaviour.