The 2020 reforms should incorporate all DPIIT-registered startups, including those with revenue over INR 100 Cr

According to many startup founders, the taxation of ESOP should be at the time of sale of shares instead during the exercise

In the last two years, ESOPs have been a major talent attraction weapon for Indian startups. This shows in stats too. In 2021 alone, Indian startup employees made over $335 Mn through ESOPs, according to Inc42 Plus data.

On February 1, 2022, as finance minister Nirmala Sitharaman would be reading her paperless Union Budget 2022 speech, the startup industry, an industry that PM Narendra Modi has been supervising as one of the mega flagship projects under Startup India, will be keenly awaiting for ESOP taxation reforms, a step further from the 2020 reforms.

As the startup valuations are based on futuristic assumptions and calculations, the taxes over ESOPs have been a huge disdain for startups and its employees. One of the biggest issues with ESOPs is the double taxation under Section 17(2) of the Income Tax Act, which employees have to pay. These are:

“For Indian startups to stay Indian, the taxation of ESOP should be at the time of sale of shares instead during the issue,” has been a long-pending demand of the Indian Private Equity and Venture Capital Association (IVCA).

The double taxation has significantly reduced the ESOPs potential for startups to exercise. As a result, in 2020, finance minister Nirmala Sitharaman had brought some landmark changes to the ESOP taxation policy for startups.

The Union Budget 2020 made an amendment to Section 191 of the Income-Tax Act. According to this amendment:

“For the purposes of paying income-tax directly by the assessee under sub-section (1), if the income of the assessee in any assessment year, beginning on or after the 1st day of April 2021, includes income of the nature specified in clause (vi) of sub-section (2) of section 17 and such specified security or sweat equity shares 28 referred to in the said clause are allotted or transferred directly or indirectly by the current employer, being an eligible start-up referred to in section 80-IAC, the income-tax on such income shall be payable by the assessee within fourteen days:

In simple words, employees of ‘eligible’ startups were given an option to defer their tax on ESOPs by five years from the date of exercise or at the time of departing the company or at the time of sale of those shares whichever happens earlier.

Why ESOP Tax Reforms 2020 Are Ineffective For The Startup Community?

Speaking to Inc42, Siddarth Pai founding partner of 3One4 Capital said, “This deferment of ESOP tax policy is not applicable to all the DPIIT-recognised startups but a handful. Out of 62,000+ DPIIT-registered startups, only Inter-Ministerial Board-approved startups that are hardly 450 in numbers are eligible for this.”

The Union Budget 2020 had set the eligibility clause for startups to avail tax deferral scheme. The eligible startups are determined by a body called the Inter-Ministerial Board set up under the department for the promotion of industry and internal trade (DPIIT).

The eligibility is determined by the IMB based on the below criteria:

The IMB has hardly approved around 450 startups so far, and thus only these startups are eligible under the 2020 amendments. 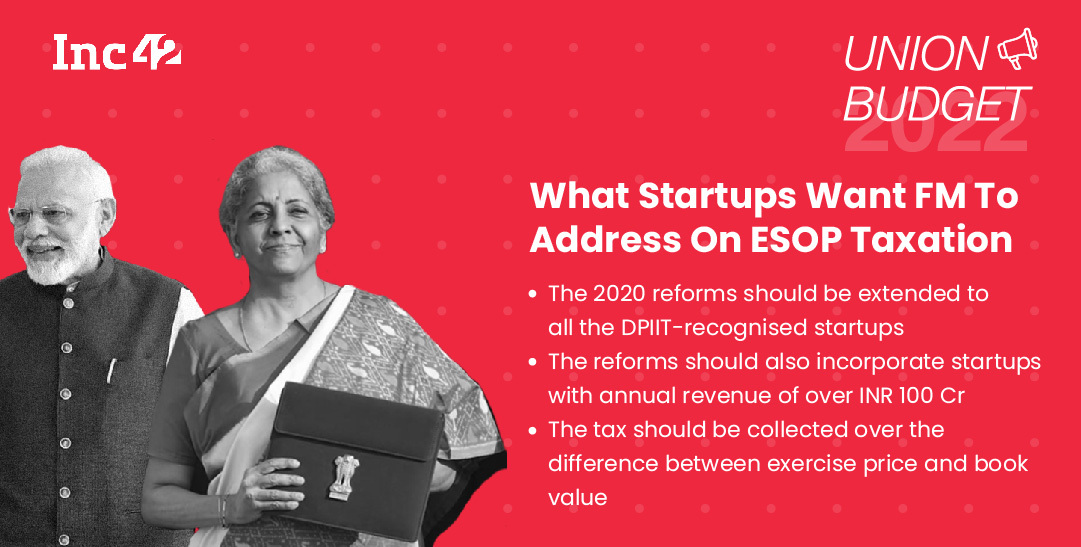 Mohamad Faraz, Founding Partner, Upsparks, an early-stage venture capital firm said, “Given that more and more startups are growing in the country, and ESOPs being one of the most important tools to hire and retain skilled workers, we believe that ESOPs taxation should be eased or relaxed. Advance taxation should not be taken.”

So, what exactly are the demands of the startup community?

Explaining the second point further, Pai stated that INR 100 Cr ($13 Mn) revenue is no longer a ceiling bar for most startups, it varies from company to company. It could be a large amount for some startups, while for many, it may not. This will put them at a disadvantage against global competitors.

Hence, even if a startup crosses the INR 100 Cr bar, which is the maximum revenue limit for a startup to be recognised under DPIIT, the startup should continue to get the taxation benefits.

Further, on the third point, Pai elucidated that fair market values are evaluated by large investors and advisors after looking at the company’s future prospects. These equity investors do get additional rights and benefits that justify a certain fair market valuation.

However, for employees who are not exactly investors, the same approach should not be taken. It simply does not make sense to pay tax over the difference between fair market value, earmarked by investors, and the exercise price.