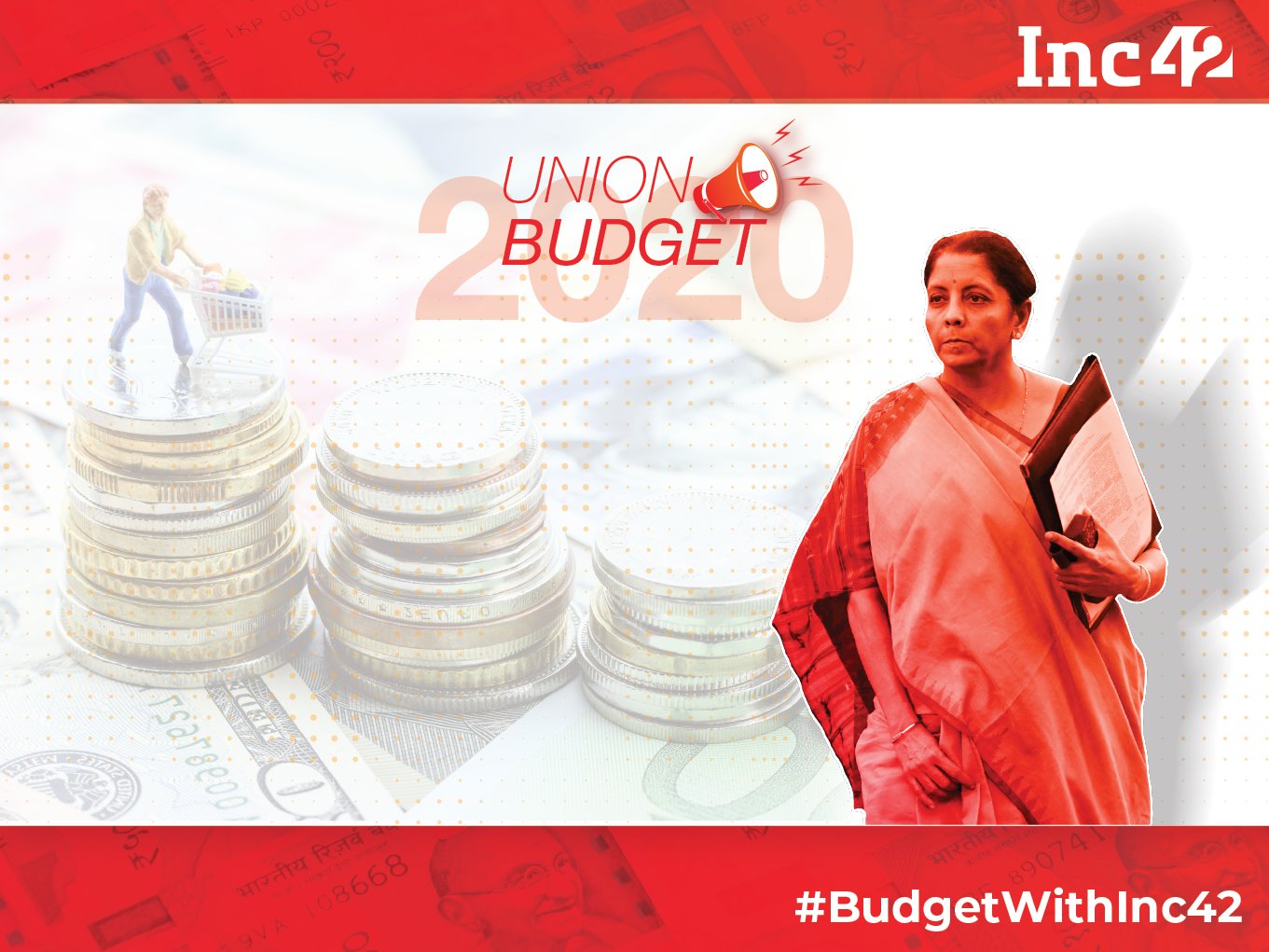 Removal of DDT can drive up increase investments in the country, say founders

While Union Budget 2020 may have failed to fulfil the expectations of markets, as seen in the fall in Sensex, it is being widely looked at as a pro-middle class budget, primarily because of the slash in the personal income tax rate for earnings up to INR 15 Lakh. Much of the Union Budget 2020 speech was spent by consumers in anticipation of the income tax announcements, and while the new tax rates are welcome, there are more than a few questions worth asking and ones that Indians would be looking to answer in the next few months.

Here are the new tax rates under the simplified tax regime. Individuals have the option to stick with the existing tax regime or move over to the lower rates.

The budget also allows taxpayers to choose between the existing income tax regime without tax exemptions and the new regime with slashed income tax rates.

The boom in the Indian startups is credited to the aspirational middle-class. Be it smartphones and data connections or online shopping and online food delivery, it is the middle-class that has been driving businesses in India. Venture capitalists have also been betting high on the middle-class segment, which constitutes the largest demographic currently.

According to industry estimates, more than 100 Mn Indian population has currently gone online. And, in the next few years, around 200 Mn more middle-class population will go online. The increased internet penetration in Tier 2 and Tier 3 has also opened up newer markets.

According to DataLabs by Inc42’s Annual Indian Tech Startup Funding Report 2019, by the end of the calendar year of 2019, the total funding poured into Indian startups since 2014 stood at $58 Bn whereas the total count of funding deals crossed the 5K mark with 5,011 investments.

With the newly-proposed tax rate focussing on promoting the ease of living for a common man, the B2C segment is expected to benefit. Reduced tax slabs shall lead to higher disposable income; thus enabling more consumption.

“Tax saving of INR 80K for income up to INR 15 Lakh is a benefit for the working class and should help in having more disposable income, be it travel, fashion or luxury, so we’re hopeful for a kickstart to the economy to recover and get better in the long term,” said Dharamveer Singh Chouhan, cofounder and CEO, Zostel.

The reduction in the tax burden for individuals is expected to provide them with the requisite financial cushion to encourage spending during the current economic slowdown. “The tax measures seem to have been announced with a certain degree of forethought, and we hope that in tandem they stimulate purchasing, boost the bottom line of companies, generate employment, and help bring us back on track after the economic slowdown,” Savitha Kuttan, CEO, Omnicuris, told us.

Lowering tax for income up to INR 15 Lakh is expected to allow young employees to have more wealth at their disposal and help enhance savings and boost consumption, thereby growing the market for B2C startups.

“Simplification and reduction of income tax will leave more money with individuals and drive consumption. This should be followed by the increased availability of credit, without which access to resources will remain with those who are already wealthy,” said Kunal Shah, founder and CEO of CRED

Some experts, however, feel that individuals opting to pay tax under the new lower personal income tax regime announced at Union Budget 2020 will have to forgo almost all tax breaks they were claiming in the current tax structure, which means their overall savings are likely to be impacted under the new tax regime.

“Depending on whether the startup is providing an essential good or something that can wait, the uptake will differ, if more and more taxpayers are opting for the new regime. We should wait to see how things move before coming to a conclusion,” Pranav Anam, founder, The Gene Box told Inc42.

Tax rate for existing companies has been brought down to 22% and the tax rate for new companies that start manufacturing by March 31, 2023 has been reduced to 15% in order to boost manufacturing and new firm creation. Finance minister Sitharaman also proposes 100% tax concession to sovereign wealth funds on investment in infra projects.

The move, along with improved GST collections, is seen as a positive move that shall provide the much-needed stimulus to the Make in India campaign, attract more private investors both nationally and globally, and help create more jobs.

“It will help existing companies expand their businesses and save more to focus on making fresh purchases of new services, growing the market for MSME and other producers,” Venkatesh Rangachari, cofounder, Grocurv, a B2B services procurement platform, told Inc42.

Rangachari also added that for new Companies, the reduction in tax rate will be in the same vein. Companies will feel confident to spend more on goods and services to facilitate their growth, thereby also expanding the market for service providers.

Since most startups don’t make profits in their early years on a large scale, so the tax rate reduction shall in the longer-term promote entrepreneurship. “This will inspire individuals to keep building companies and become a wealth creator and this goes along with the fact of decriminalising the civil offences. It is very helpful that the government is promoting largely the wealth creation aspect of the Indian business landscape, by being more risk-taking and also increasing the rewards and returns with the reduction in the tax cuts,” Chouhan added.

Removal of DDT Shall Boost Investment

The finance minister has also proposed a 100% deduction of profits for three consecutive assessment years out of seven for eligible startups having turnover of up to INR 25 Cr. The investment clearance cell is expected to benefit in terms of early-stage advice.

“Nurturing and supporting the startups in their initial stage is imperative to strengthen the foundation of the entire ecosystem. Further, the increase in the turnover limit for tax exemption from INR 25 Cr to INR 100 Cr will help in higher valuations for startups. This will further attract investments in the ecosystem,” said Jeetender Sharma, founder and MD, Okinawa Autotech.

Since building sustainable high growth businesses can be time-consuming, money saved from this can be invested back in the startup’s growth, said founders

“Our team’s average annual income is 6L, so it definitely benefits them to save tax and invest in themselves. This increases their disposable income and young Indians want to spend on consumption and development, so it comes back to GDP,” said Rajan Bajaj, founder and CEO, Slice, a fintech startup.

As per the data released by the IT department, total tax applications filed in 2018-19 was 58.7 Mn with a gross recorded income worth INR 51.3 Lakh Cr. In 2018, a 40% decline was observed in early-stage deals compared to the previous year due to uncertainty over angel tax norms that year. Thus the government’s decision to decriminalise some norm violations under Companies Act is also being welcomed. This will enshrine taxpayers charter to boost confidence, the finance minister said.

However, some feel decriminalising civil offences may be a double-edged sword.

“Startup or any company should be in check. While beneficial in some cases, it may also lead to companies taking undue advantage of the same. Perhaps the amendment will pay attention to this aspect as well, making up for an all-inclusive and fault-proof provision,” said Jasmeet Thind, cofounder, Coutloot.

Besides, the abolishment of the Dividend Distribution Tax and extension of concessional WHT (Withholding Tax) on debt income are looked at step towards ensuring investments in the country go up. “The move is especially beneficial for Foreign shareholders who will now be able to get a claim on such tax payments in countries of their origin. This would boost investments across the spectrum and in turn create employment opportunities,” said Jitin Bhasin, managing director, RupeeRedee and FincFriends.