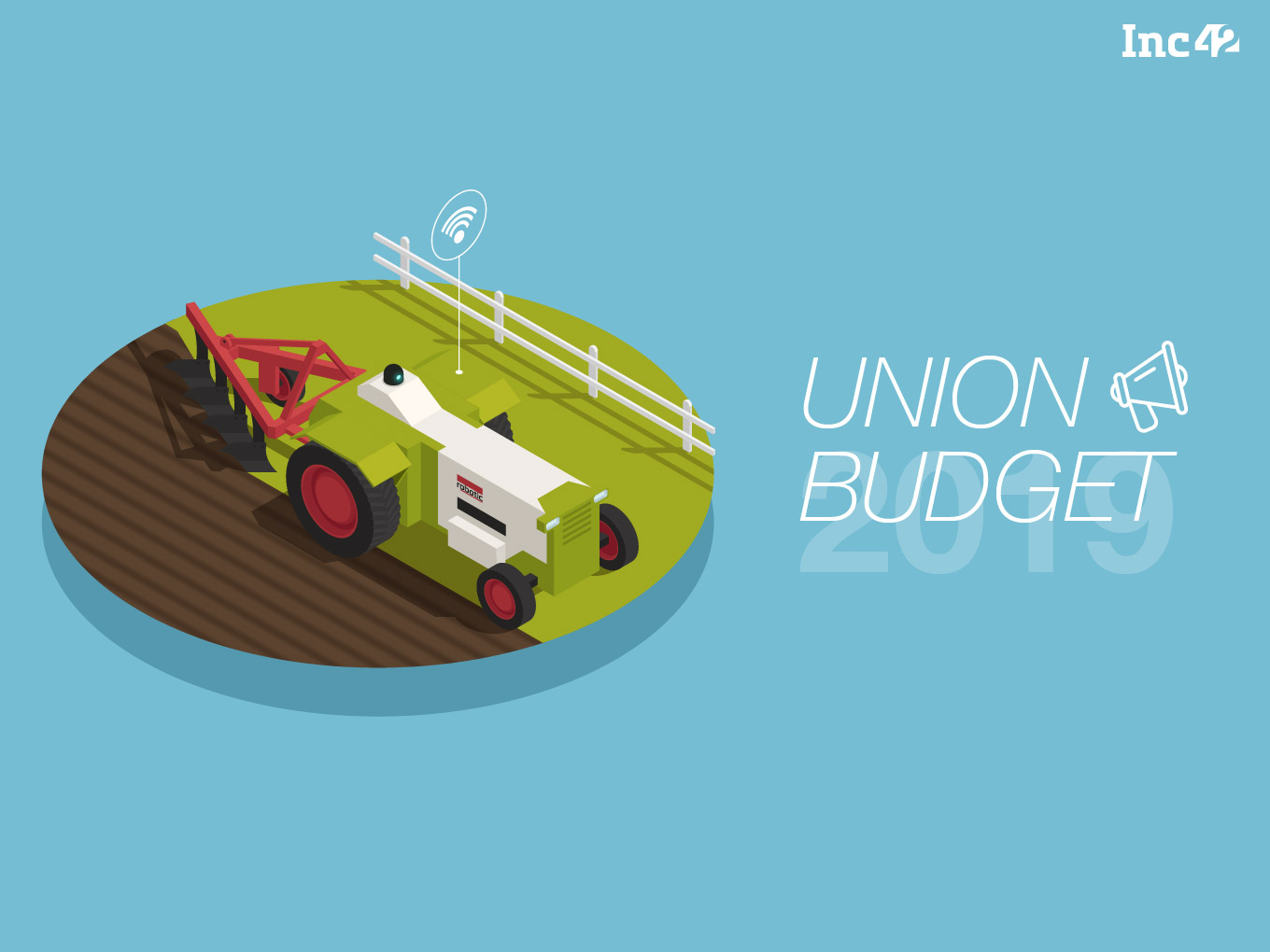 Government will focus on improving production of bamboo, honey and khadi clusters

The Indian government is targeting 75K agritech entrepreneurs by 2020

There are about 1,090 agritech startups in India and many of these have attracted plenty of investors, as farming is touted to be a $400 Bn industry in India. According to Inc42 DataLabs, the total funding in agritech startups in India grew from $46.1 Mn 2017 to $66.6 Mn in 2018. Analytics (AgNext), supply chain management (Ninjakart), marketplace (Dehaat), agri-lending (Samunnati, Farmart), are some of the agritech startups making waves in this sector to complement the mainstream agriculture activities.

Yet, in her Union Budget today, India’s new finance minister Nirmala Sitharaman, like her predecessor, did not make any clear separation between agriculture and agritech policy measures.

In Inc42’s Union Budget 2019 survey in the lead up to the budget, some of the key expectations that emerged were better access to funds, more robust infrastructure to produce cutting-edge technology and the need for more involvement from the government to boost agritech startups through incubation support and marketplace availability.

Many of these points were not touched by Sitharaman in the Union Budget 2019. For stakeholders in the agritech industry this budget would have been underwhelming —  especially for startups that were looking for more advanced policy measures with regards to technology such as the so-called ‘AgriStack’ that would enable startups to easily access data about agriculture, subsidies, and improve their solutions.

But, on a brighter note, there was a clear emphasis by the government in trying to address the existing gaps by use of technology and innovation in rural areas while promoting entrepreneurship at the grassroots level.

In present, with “Gaon, Garib Aur Kisaan” being the central point of development for the next five years, here are the key takeaways from the Union Budget 2019 for the agri-community of India:

What Could Make Agritech Startups Happy With The Union Budget 2019

There is no doubt that the Union Budget 2019 has focussed more on the farmers of the country, rather than the technology that’s being used to solve the issues of farmers. However, Sitharaman did not leave the agritech community completely empty-handed either.

“We will invest widely in agricultural infrastructure. We will support private entrepreneurship in driving value-addition to farmers’ produce from the field and for those from allied activities and also for generating renewable energy,” she said.

This statement certainly gives some hope for the agri-community and agri-startups to work hand in hand to promote India’s agrarian economy. The announcement for building 80 livelihood business incubators and 20 technology business incubators by 2020 to help prop up 75K agritech entrepreneurs by the government is a welcome step to make this happen.

The government’s stand on promoting the ease of doing business and ease of living for farmers is another opportunity for agritech startups to innovate in. If not clear instructions, the government is giving broad directions about the areas it is focussing on, and startups in those fields can hope to work with the government in the future.

Zero budget farming is a set of farming methods that involve zero credit for agriculture and no use of chemical fertilisers. The zero budget farming aims at pulling the farmers out of the debt trap and is also an attempt to make small scale farming a viable vocation.

“We shall go back to basics on one count: Zero Budget Farming. We need to replicate this innovative model through which in a few states farmers are already being trained in this practice. Steps such as this can help in doubling our farmers’ income in time for our 75th year of Independence,” Sitharaman added emphatically.

The FM also highlighted that the centre will work with state governments to allow farmers to benefit from National Agriculture Market (e-NAM), a pan-India electronic trading portal for agricultural produce . It will also make sure that the Agriculture Produce Marketing Cooperatives (APMC) Act should not hamper farmers from getting a fair price for their produce. This will further improve the importance of digital infrastructure in the agri-community, thereby opening doors for agritech startups.

As mentioned earlier, a number of agritech startups have mushroomed in the last few years, but the growth of the sector has been quite slow due to reasons such as lack of government support, policy lag and lack of data — or accurate data — and poor infrastructure.

From what it appears, the government is moving with a sense of caution when it comes to agritech policies, Farmers issues are one of the major pain points for the government and in the lead up to the election, the government came under heavy criticism for the handling issues of farmer distress and suicides.

Meanwhile, the Indian government did list many urbanisation initiatives for rural areas that will provide a boost to the top sectors of the Indian startup ecosystem such as ecommerce, fintech and consumer services. However, the sharper focus on urbanisation was tempered by the relatively shorter emphasis on agritech.

Like last time, there are many what-ifs but at the moment the government is not giving away much when it comes to its agritech policy, but this budget certainly has more intent than the previous ones to look at agritech. Is that enough is the real question.