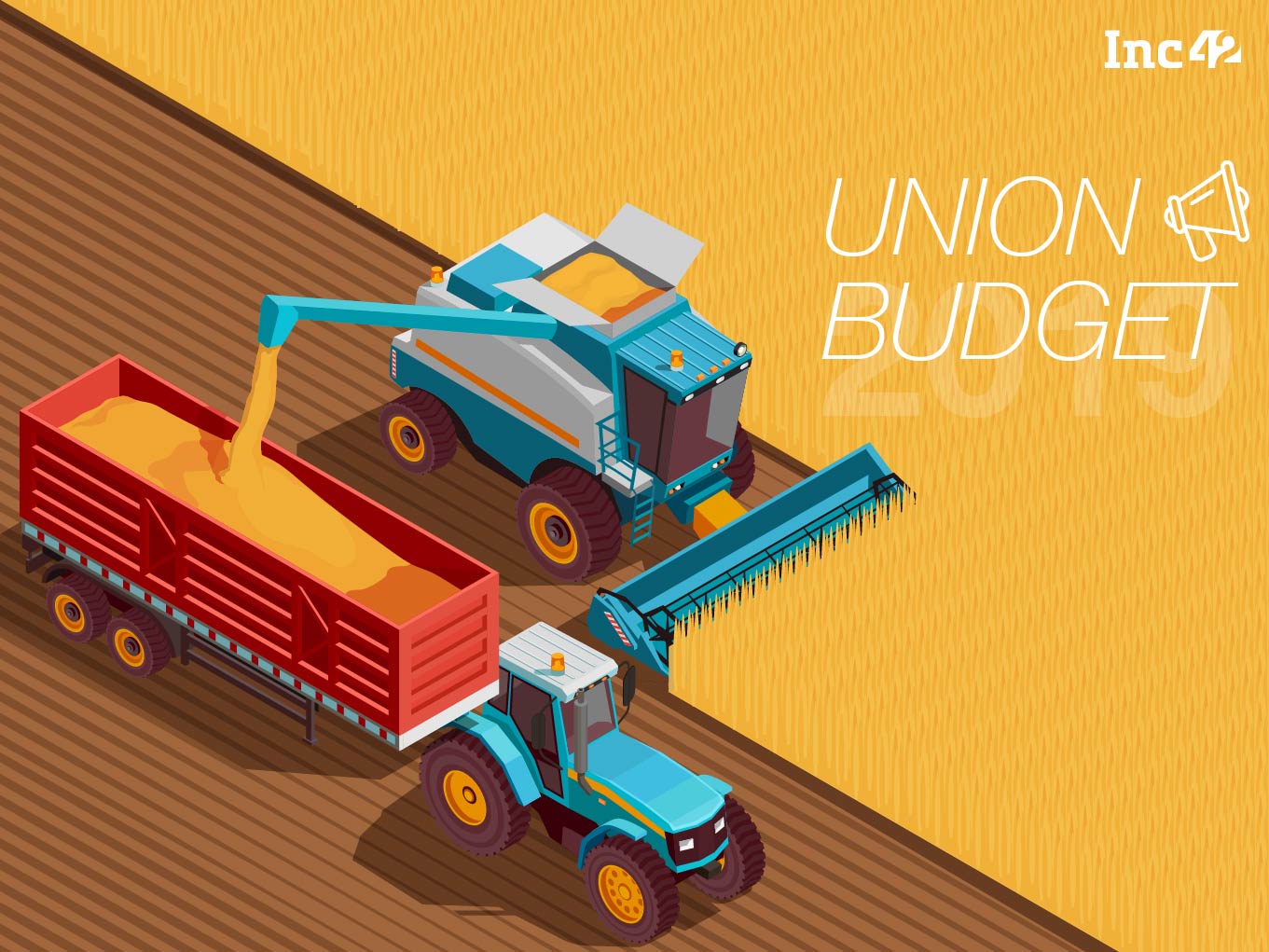 The Union Budget 2019 is just around the corner. The newly-appointed finance minister Nirmala Sitharaman will present her first Union Budget on July 5, 2019. One of the biggest areas of focus this time will be the budget allocation for agriculture. Catering to the needs of more than 60% of the population dependent on agricultural income (according to the 2011 Census), the Indian agritech ecosystem has seen a lot of innovation and disruption. But with union budget for agriculture sector, the agritech startups in India would be looking for hopes of better opportunities in the next five years.

The interim Union Budget from February 2019 presented by the then finance minister Piyush Goyal was termed as a ‘macro budget’ with regards to the Indian agricultural sector, besides the agritech ecosystem didn’t get the required focus as well.

The focus of the budget was mainly on:

As seen, the interim union budget for agriculture sector did not mention any specific measures for the agritech startups. However, agritech startups have continued to add fresh perspectives and ideas to help farmers solve problems at the grassroots, by leveraging technology. There has been innovation in the area of market connections, retail, B2C and B2B marketplaces, and digital economy platforms for farmers.

We reached out to other notable stakeholders in the Indian agritech ecosystem to know their expectations from the upcoming union budget for agriculture sector, the gaps they want the government to address, and their suggestions on how it can do so.

Most agreed that agritech startups need more support from the government in handling the infrastructural issues and opening up opportunities and customers within the agriculture sector to be able to cater to the most urgent needs.

The Existing Gaps In Indian Agritech

Most of the agritech stakeholders Inc42 spoke to agreed to the fact that startups have expanded rapidly in the past couple of years, but the growth of the sector has been held back by lack of government support, lack of structured data, fewer large investments, poor infrastructure, and policy lag as well as by inflation to tackle which farmers are getting lower income.

“Around 44% of the Indian workforce is engaged in agriculture and associated activities, yet the sector has barely seen the application of unconventional technologies such as machine learning, big data, and artificial intelligence,” – Aarav Unmanned System’s Singh added.

Jatin Singh, founder and MD, Skymet Weather Services further believes that the slow growth is because there is no surplus in the market.  “Only 47% of Indian farmers earn more than a lakh of rupees. And most businesses in the agritech space are on the data side or machinery side. We have very few startups on the livestock or the biotech side,” he added.

However, Raghav Rungta, investment associate at Asha Impact, had a different opinion here. “Given the inherently long feedback loop in the sector, one has to give it more time to see business evolution. Agritech startups have seen decent fund flow this year, most importantly, from first-time agri-investors. Singling out one issue may not be the most effective way of diagnosing what ails this sector,” he added.

Many of the startups and investors had very similar demands and expectations from Union Budget 2019. These include:

Does Agritech Need A Dedicated Budget?

With the agriculture sector making up a huge part of India’s GDP and being one of the largest employers in the country, many believe that it’s time the central government announced a dedicated budget for this sector.

Alekh Sanghera, the founder and CEO of agritech lending startup Farmart told Inc42 that if the government is serious about doubling farmers incomes, then it needs to look at a separate budget policy for agriculture, and not club it with other sectors.

“The PM Kisan Yojna is not the solution as the government should focus on promoting the larger agri-ecosystem and not give small sops in the form of INR 6000 per year. Farming is a dignified profession and farmers need to be paid their due share for their hard work,” he added.

However, Aarav CEO Singh does not voice the same opinion as Sanghera. “Agritech does not need a dedicated fund from the government. It needs agri departments in the government to contract out equipment, products and services to these startups and pay them on time,” he suggested.

Should India Focus On Agriculture Or Agritech?

It’s no secret that the main focus of the various central governments over the years has been on promoting agriculture and allied activities. From the White Revolution in 1970 for dairy farming to the Protein Revolution launched by PM Narendra Modi in 2014, so far twelve such agricultural revolutions have been initiated by the government. However, all these are focused on increasing productivity, development of indigenous cattle breeds and other such activities.

Although the Modi government put technology front and centre in the Protein Revolution, there have been limited opportunities for Indian agritech startups to scale up in a meaningful manner. So does India need to move on from agriculture to agritech to explore more holistic growth? Rungta doesn’t believe so.

Many of those who support Rungta believe that the government needs to address the structural issues that impact the agri-sector as a whole. For instance, a focus on rural incubation hubs will be helpful but it is just a drop in the bucket. A targetted approach to market reform, farm-gate value addition through food processing, and financial literacy and access is the need of the hour.

“If structural issues are addressed, and government incentive structures can buttress the risk private companies undertake by working the sector, the market should see a mushrooming of business models willing to tap into the sector, just as PSL spurred the  MFI industry,” Rungta added.