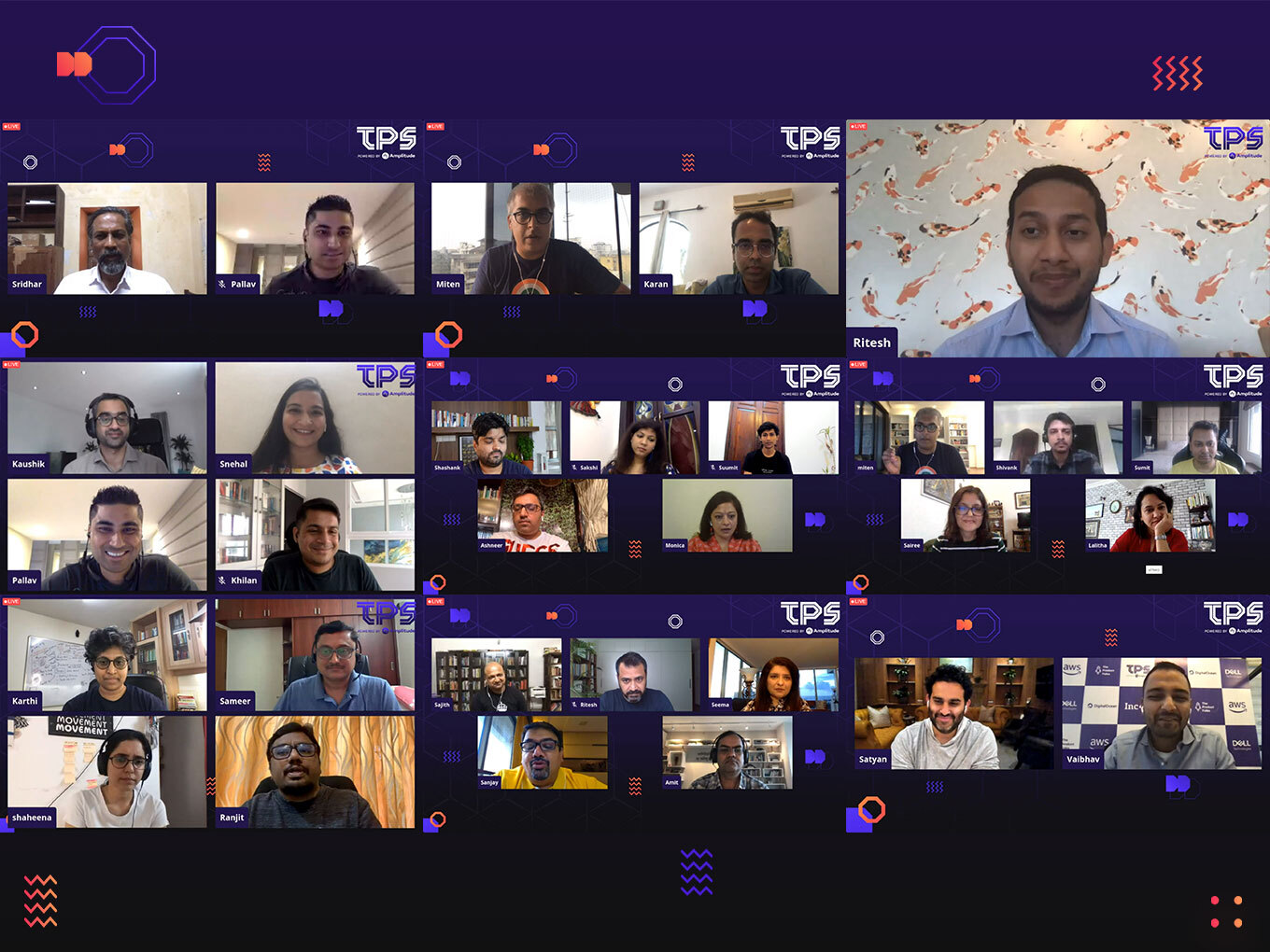 The summit saw participation of 5,000 attendees with 24 hours of content, workshops and keynotes

For two days, the country’s top founders, VCs and product leaders got together to brainstorm everything from achieving product market fit, metrics that matter, scaling globally and more

Though India’s startup ecosystem has grown by leaps and bounds in the last decade, the country is still far behind product nations such as the US and Israel. However, with teeming tech talent and a demographic dividend that the country is primed to capitalise on, there’s every reason to believe that the country can become a product hub that not only caters to its 1.3 Bn population but also creates tech products that are used the world over.

As an attempt to bridge this gap, after 3 months of hustle and bustle, Inc42 & The Product Folks hosted India’s first and largest virtual product conference which discussed and talked about one thing “Building high growth products for India.”

Started over some discussions and followed by a lot of research, we found out how most product-related knowledge and information we consume in India is centred around the West and how this is sorely lacking for the Indian context these thoughts shaped our vision for — The Product Summit which took place on 10th & 11th October .

Initially planned as a one-day conference, we got 1,500 product folks booking seats within a short span and naturally, we had to expand the scope of TPS 2020 to two days. We were overwhelmed by the early reception.

The Product Summit was an absolute success thanks to the hustle of Inc42, The Product Folks and everyone else who supported our endeavour! And special thanks to our partners who supported us in making this happen, including our sponsors — Amplitude, AWS, Dell Technologies, DigitalOcean and partners — CoWrks and OYO Workspaces.

We saw participation of over 5,000 people during the conference along with the event trending on Twitter for an entire day. And why wouldn’t it? For two days, the country’s top founders, VCs and product leaders got together to brainstorm everything from achieving product market fit, metrics that matter in early stage investing, the right use of data to gauge consumer behaviour to scaling globally and reaching the next billion users.

“The Product Summit has to be one of the smoothest virtual conferences I’ve attended. It was amazing to see so many Product & Growth folks get connected at the summit. The entire agenda was packed with learning & happy to hear amazing startup stories from Zerodha, OYO & other high growth startups in India. Glad that Amplitude was able to partner with Inc42 & The Product Folks & bring such an exciting event to the Indian ecosystem.” – Julio Bermudez, VP – APAC & LATAM at Amplitude

For those who missed the event, we have curated a snapshot of some of the most interesting insights to have come out of The Product Summit:

Don’t Be Misled By Data

With the world today being data-driven, tech startups too have to crunch numbers in order to measure how their consumers behave and which demographics can be nudged to create more value. In such a world, Zerodha sits on a mountain of data on trading in the capital markets but founder Nithin Kamath said the startup doesn’t use data for anything other than improving customer support.

That doesn’t mean the bootstrapped unicorn doesn’t catch signals from its data reservoir — sensing that the 2 Mn+ new investors on its trading platform were being lured to penny stocks, the company created a ‘Nudge’ feature to alert users about the risk they were taking.

While data can shed light on a lot of issues for tech startups, the Zerodha founder cautioned that reading numbers the right way is equally important. He illustrated this with the example of many investing and payments startups boasting of Tier 2 and Tier 3 penetration on the back of KYC data.

The problem with this approach is that a lot of youngsters move to Tier 1 cities but their Aadhaar registrations are in their hometowns — consequently, the real data point to note here should be the IP address of the users, at least for Zerodha.

The Importance of Being ‘Idli Positive’

Sridhar Vembu is not your typical founder — he’s more of an entrepreneur’s entrepreneur if there’s something like that. The fact that two of our speakers, Zerodha’s Nithin Kamath and Pallav Nadhani, are fanboys of the SaaS maestro from Chennai is a testament to the admiration that India’s startup ecosystem has for him.

Keeping with the startup guru image, Vembu dispensed advice on the survival of a bootstrapped software company, saying “In software technology, you cannot attempt to directly build big. For instance, the Microsoft operating system. It is not feasible, you have to start building small. Otherwise, it is always a recipe for failure, you get disillusioned.”

He recounted the experience of how Zoho started by making small deliverables count. One of the bootstrapped SaaS giant’s first products was written by cofounder and IIT Madras batchmate Tony Thomas single handedly in three months. “It kept us alive and put us on the radar. It made us ‘idli’ positive,” quipped Vembu.

The Nuances Of Scaling A Two-Sided Marketplace

Though there are many examples of SaaS startups from India that have eked out their place globally, the country hasn’t successfully exported many B2C tech products. Among a few such as Ola, Zomato, Byju’s that are foraying into international markets with varying degrees of success, Oyo is a shining example.

On a Sunday morning, Oyo founder Ritesh Agarwal was up to the challenge of shaking people off their torpor — and he chose the hotel room aggregator’s technology stack to enliven the audience at The Product Summit. The thrust of Agarwal’s keynote was towards the technological innovations that the startup has had to make in order to satisfy both ends of the service — hotels and customers looking to book a room.

Agarwal dove into the OYO OS, which is the SaaS suite powering the OYO experience for hotel owners. He talked about the intricacies of building an all-encompassing software that can be used by even the most untrained hotel front of the house executives.

“The system tells the managers what decisions to take, rather than them searching for the right options,” he said, so decisions such as which room to give to the customer (based on their past preferences and feedback) are not left to human intervention.

On the demand side, the hotel room aggregator has had to iterate its app continuously to accommodate more locations and give a greater number of options to make bookings more attractive in terms of value for money. “From our perspective, we went back to the roots and asked ourselves, what would our customers care about,” he said.

Speed As An Execution Strategy To Take On Incumbents

If building a two-sided marketplace is hard, creating a product that satisfies the needs of three stakeholders is tougher. WhiteHat Junior founder Karan Bajaj told the audience at The Product Summit how the edtech startup has managed to satisfy kids, parents and teachers through a platform that teaches coding to children aged 6-14.

While other edtech startups too were offering coding classes, Bajaj figured out the right mix of product marketing and creating a cost effective model to hit product market fit in 7 months after launch. As soon as that happened, he started scaling up operations fast and iterated the product to test waters in the US.

“If you don’t scale with speed when you get the PMF, then everybody who is better funded will get into the market. In our case we have a very crowded market with the likes of Unacademy, Toppr, Vedantu, BYJU’S,” said Bajaj.

This approach bore fruit when the pandemic hit as the startup had already garnered a critical mass of users. Its pre-Covid revenue level of INR 14-15 Cr per month doubled every 30 days and the company’s from 300 people strong to a size of 4,000 amid the lockdowns. The pace of teacher onboarding too shot up as people got restricted to their homes and jobs were lost — rising from 1000 to 10,000 in a matter of months.

“Speed and decisiveness are a strategy and not a way of executing your strategy,” Bajaj quipped, adding that VCs were not convinced when he had pitched the idea of foraying into the US — but he persisted.

Creating A Digital Universe Of Products

With math and computer science degrees from Stanford, Satyan Gajwani was an unlikely candidate to have anything to do with a legacy media band in India. But through a turn of events that included a global recession, he landed at The Times Of India and took reins of its digital businesses.

In a decade’s time — a relatively short time span in the lifecycle of Indian conglomerates — the Times Internet chief has created a panoply of B2C and B2B products under the company’s umbrella.

Gajwani explained how the multiple moving parts of the Times ecosystem feed into each other through a flywheel of data and subscriptions to drive user growth and higher ARPU. But the most interesting takeaway was his idea of what a super app ecosystem might look like.

Breaking away from the full service WeChat model, Gajwani has developed a thesis to offer tangential use cases — such as embedding Gaana and a gaming section in MX Player to drive cross pollination of users.

“We learned that creating super apps is not as simple as just putting stuff in front of customers. The truth is that when a user is reading the news on Times of India, they aren’t looking to book a movie ticket, said Gajwani.