Zoho’s Sridhar Vembu On Bootstrapping By Investing In R&D, Credentialism & Building For Bharat

Zoho’s Sridhar Vembu On Bootstrapping By Investing In R&D, Credentialism & Building For Bharat 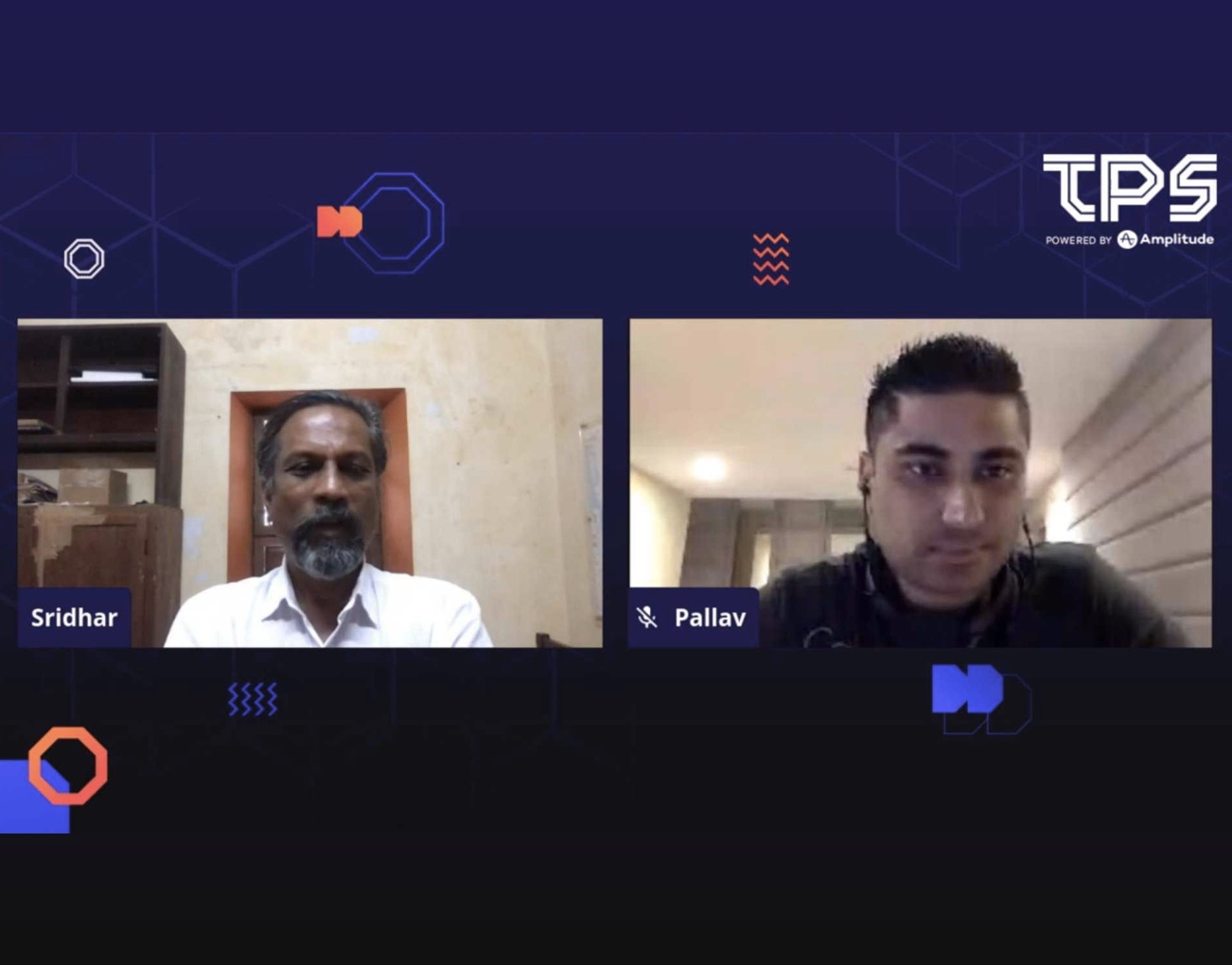 Speaking at the closing session of The Product Summit 2020, Zoho chief Sridhar Vembu said that the route to prosperity is being able to make products that serve India’s needs

According to Vembu, it is time the private sector and the corporate sector stepped up to back manufacturing needs. The government alone can’t build products, he said

Any discussion around product building would be incomplete without including insights from Sridhar Vembu, founder and CEO, Zoho Corp, known as India’s SaaS maestro, who has put the country on the global map by building multiple world-class products since launching Zoho in 1996.

And who better to wrap up day one The Product Summit 2020 than Vembu with his thoughts on bootstrapping, the key to scaling up in a sustainable manner and building for Bharat. The fireside chat “The Bharat, A Product Nation” saw Vembu, discuss this and more with Pallav Nadhani, founder of Charts.com.

The much-awaited chat revolved around how India could transform itself into a product hub, what is needed to achieve this goal specifically from the point of view businesses that can create jobs and value, the role of education and other ecosystem stakeholders such as venture capitalists and corporates. Here are four key takeaways from one of the best fireside chats this year in India.

Starting Big: A Recipe For Failure

While Vembu always believed in not forgetting his roots, the turning point towards building products in India was in 1995 when he and his colleagues were spending some time in Santiago. There they saw that every product they came across was either made in China or made in Malaysia or made in Taiwan and so on. ‘Made in India’ was missing from the racks. This is when Vembu knew that he and his team had to build products from India for the world.

“In software technology, you cannot attempt to directly build big. For instance, the Microsoft operating system. It is not feasible, you have to start building small. Otherwise, it is always a recipe for failure, you get disillusioned,” said Vembu.

The Zoho chief believes that starting with something small creates small successes which will eventually help you reach where you want to. “Our first product was also something that was small and put food on our plates. It kept us alive. My colleague Tony Thomas wrote it single-handedly in three months. It put us on the radar. It made us ‘idli’ positive,” he said casually, while also mentioning Nadhani’s similar experience at FusionCharts, which was bootstrapped till exit.

Today, Zoho is one of the biggest SaaS players in the world and a shining star in the Indian startup ecosystem. It has offices across seven countries including, the US, Netherlands, Singapore, UAE, Japan, and China. The company has more than 50 Mn customers and more than 9K employees globally. It has over 50 integrated online applications that support multiple business operations such as sales and marketing, finance, email and collaboration, information technology and help desk, human resources, and custom solutions like app creator and analytics.

“Today, we have Zoho One, it is a huge product with complex machinery, However, we did not attempt this in one step, it was a long process with many stages,” said Vembu, adding Zoho One suite itself consists of over 50 Zoho applications built in-house without an iota of external funding.

Both R&D And Manufacturing Should Go Hand-In-Hand

While making things is important and we need factories, according to Vembu, what is more, or equally important is to understand the know-how of those factories. “We need to learn how to build software, how industrial processes work, how do you do the database, among others,” he said while quoting the example of Mexico.

Mexico has a strong industrial base, a lot of industrial goods are made there, however, a lot of its population is poor, he noted. The reason being the lack of know-how of its own factories. Vembu believes that we in India need to attract research and development (R&D).

However, by R&D, he doesn’t believe it is only the science behind it, it is the complete know-how. For instance, how does textile machinery work, how do you build cloud infrastructure, how do you build 5G systems. Zoho has been investing heavily in areas such as semiconductor technology, medical equipment, and programming languages and has a strong R&D team. And, he also shared how bootstrapping has helped him allocate budget and invest in long-term R&D. “Else, you always have other commitments,” he said.

Talking about Zoho’s investment in R&D, he said, “We realised that we need to master these devices, so we decided to invest in it. I’m proud of our engineers who are slogging with this medical equipment. We allot our profits towards long-term R&D and a lot of this won’t work out immediately.”

He gave the example of the Zoho team working hard to get the company’s audio and video platforms right for the remote conferencing play. But, the products won’t be hurried out of the gate as the expectations of the market are high, so Zoho is taking its time perfecting the product before launch, which is something that VC-backed companies may not have the luxury to do.

Zoho believes that this kind of long-term R&D is important for the countries and companies and more importantly on attracting both designing R&D and manufacturing. And that, Vembu, believes should be the key for Indians building products.

You Cannot Teach Someone To Build Products

If there is one thing that the Zoho founder dislikes is worshipping credentials at schools. During the fireside chat, he reiterated his thoughts on the role of education in building products. According to him, however, it is not just in India that the focus is more on exams and not learning. “Even in the US, we worship credentials. You take the best student and the best teacher, even then the very focus shifts to cracking the exam rather than learning. The students ignore everything that is not important for the test or is out of syllabus,” he said.

Vembu believes that this approach does not result in R&D. We all commit these mistakes, we take workshops, it doesn’t work that way, he noted. He also stressed that there’s no college that can teach how to build products, and the lessons only come your way if you build products.

Quoting what Gautama Buddha had said, Vembu said listening to one’s experience is the real learning. “There is no syllabus to how you build a product, pay attention to lessons you learn in your failures and practice. Ignore credentials. You cannot build products by sitting in a class,” he added.

The Private And Corporate Sector Has to Step Up

According to Vembu, it is time the private sector and the corporate sector stepped up, particularly with regard to manufacturing in India and in the areas that India can excel in.

“The government alone can’t build products. The corporate sector can invest in long-term R&D.” Vembu also clarified that research and development is not that expensive as the popular opinion goes and that it may take millions but definitely not billions. “It is more intensive in terms of work. It takes time. That’s what it is,” he said.

Lastly, he also touched upon the value of our villages and how it is time to go back to that culture and invest time into it. He shared an anecdote of how he and his friends had tea at a shop in a village and after 20 minutes of leaving the shop, they realised they had left their bag at the shop. They went back and found it right there. Nobody had taken it. “That is the rural cultural capital I’m talking about. Even in San Francisco, you cannot be sure your bag will be there.”

In an inspirational mood, the Zoho chief added that capital or wealth is not just money sitting in the bank, it is the ability to build and maintain infrastructure, it is the culture, it is our talent to build art, sculpture, products, how we resolve conflict, the law and order.

“We have to think that we are from rural india. We have to think of values and culture of those people and build products for them. A lot of tractor companies have mastered how rural people think. Connect back to your roots and that will allow you to build the right products for India.”