To Swap Or Not To Swap: India’s EV Makers On The Fast Charging Vs Battery Swapping Debate

To Swap Or Not To Swap: India’s EV Makers On The Fast Charging Vs Battery Swapping Debate

The central government has announced plans to launch an EV battery swapping policy within four months from now. The aim of the policy is to accelerate the adoption of EVs in India

The government is usually seen as one of the biggest enablers in helping a nation adopt new technology. This time the focus seems to be on helping drive electric vehicle (EV) adoption, via a soon-to-be-announced EV battery swap policy, in the country. Why not, the technology is green which simply means it is good for the environment, and its light on the pocket of end-consumers too. The best part is the fact that there are multiple business opportunities aligned with this push.

Whether it is designing hardware, developing software, appointing new dealers or service channels, or just sourcing the raw materials required, the opportunities are in billions of dollars. A recent report by Avendus Capital has noted that the EVs in India could represent an INR 5000 Cr opportunity by 2025.

The central government, with its Faster Adoption and Manufacturing of Hybrid and Electric vehicles (FAME) scheme (FAME 1 and FAME 2) has been one of the driving forces for EV adoption. Moreover, every state in India has also introduced different EV policies. However, the yet-to-be-launched battery swapping policy, has become the talk of the town ever since India’s finance minister Nirmala Sitharaman, during her budget speech of 2022-23, hinted towards the near-future launch of a battery swapping policy.

The FM had noted that the policy will encourage the private sector to develop innovative and sustainable models for batteries which in-turn will increase efficiency in the EV ecosystem.

Battery swap, as the name suggests, allows drivers and users of EV to swap their depleted batteries for fully-charged ones at a swap station. The expectation of the government is that this will help address the question of range anxiety and drive the adoption of EVs at an accelerated rate.

“Customers ask a lot of questions about the battery charging time and have a lot of range anxiety. Battery swapping will take away a lot of their worries. But the current focus is on transition from internal combustion engines to EVs. Once this disruption takes over, the next one probably would be around battery swapping,” according to Vivek Tomar, business head at two-wheeler maker HOP Electric Mobility.

He added that EV adoption is currently being driven by incentives. Swapping will be the ultimate solution when it comes to consumer convenience after the subsidy phase ends in the future.

Western countries are often seen as the early adopters of new technologies, but the concept of battery swapping has not yet caught on in a major way in the US or Europe.

Tesla had showcased a battery swap system as early as 2013. The company had claimed that the system was capable of allowing battery swaps within 90 seconds. Come 2022, the company still does not offer this facility in any of its markets. Nio, a China-based EV company, on the other hand, has already installed over 700 battery swap stations in China.

While Tesla and Nio are both making electric cars, the bigger adoption wave in India is for two-wheelers and three-wheelers. JMK Research estimates that around 1.37 lakh units of high-speed electric two-wheelers were sold during April 2021 to November 2021 period, followed by electric three-wheeler sales with electric cars coming last on the list.

“Cars are a bad example of battery swapping because there is no product fit. It only makes sense when batteries are portable enough. Majority of individuals use two and three-wheelers for commuting. Here, swapping makes sense. Once you bring down the weight of the battery to 10 kg and make it capable of running 80-100 km, these become win-win for everyone,” explained Rahil Gupta, cofounder of HOP Electric.

The startup is currently running a pilot for battery swapping with five kiosks and 50 swappable electric scooters in Jaipur, Rajasthan.

Battery swapping loses viability as we move north of three-wheelers because the cost of setting up battery swap systems for four-wheelers and bigger commercial vehicles will go up significantly. This is because the battery packs used in such vehicles are heavier and might require the use of robotics, with a dash of automation, to be successful.

It is worth mentioning here that batteries typically constitute roughly 40% of an EV’s cost. Swapping stations can help OEMs reduce the cost component in the long run for consumers and themselves. An EV that costs INR 1 Lakh to make has batteries that cost Rs 40,000 for the manufacturer. 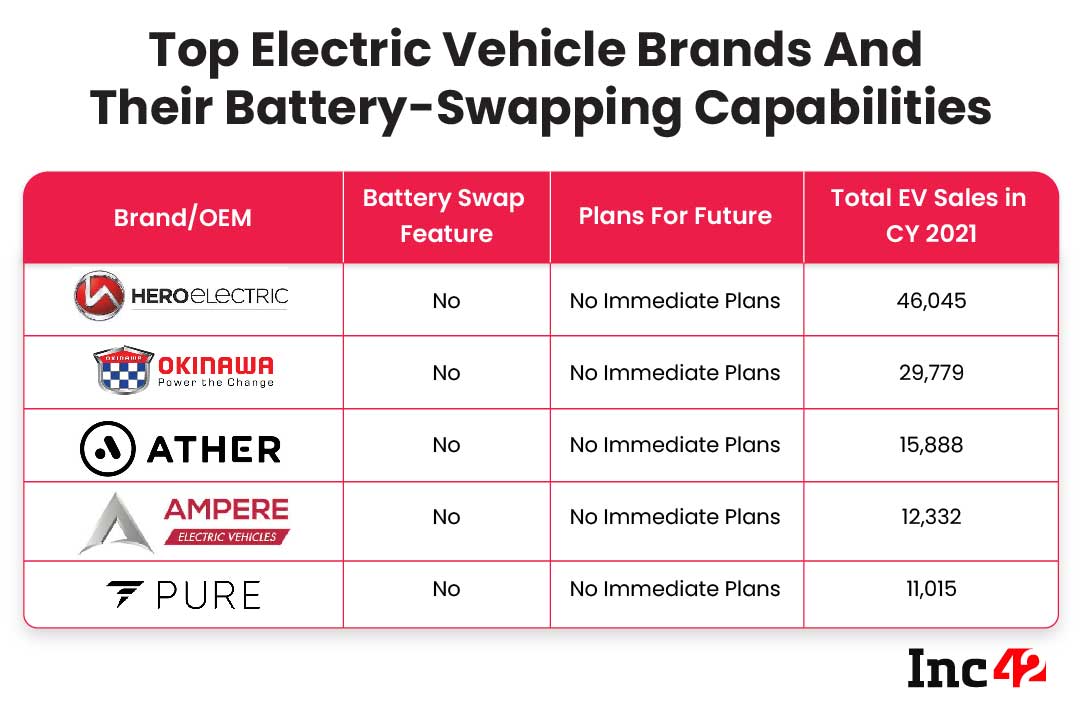 When Inc42 contacted some of the dealers that sell EVs from these brands, many of them did not know much about battery swapping. So while some manufacturers might be able to leverage swapping to scale up, not all OEMs are currently doing it.

“Charging a Nio EV at home in China costs around INR 12-INR 14 a unit. But when you swap a battery from one of Nio’s battery swap systems in China you will have to shell out approximately INR 42. Now both the options are giving you the same amount of range but the latter is costing more than the former. There can further be subscription costs,” said Akshay Singhal, founder of Bangalore-based Log 9 Materials, which is working on battery chemistries as well as battery management systems (BMS).

According to the founder, the battery swapping approach might not work out in the Indian market due to the capex. Besides, installing a robotic system to swap the batteries is not viable from a startup’s perspective due to the complexity involved.

The Question Of Data Sharing & Standardisation

To be able to make battery swapping successful and economically viable, Singhal pointed out, each city will have to have at least 80,000 to 1 Lakh electric vehicles from the same manufacturer or with compatible batteries. Think of the problem like replacing cartridges in printers. Each manufacturer uses different shapes and sizes of cartridges.

This could lead to a major problem for the brands and OEMs as they would have to follow the standardised battery manufacturing forms, and EV battery standardisation is yet to take place in the country.

“What you are saying is that 80,000 to 100,000 EVs in a radius have to be of the same type having the same battery to see the business profitability. I don’t think there is any city in India which has a single model in that number. Even the most-selling ICE-powered two-wheelers have taken decades to represent such strong numbers in a defined radius,” added Singhal.

The other option is to mandate standardisation, but the catch here is that brands and OEMs use their battery tech to differentiate themselves from the competition. If all EVs have the same mileage and batteries, the battle becomes one of price. Wouldn’t the OEMs and brands lose much of their competitive edge?

Coincidentally, there are international companies forming consortiums to standardise EV battery manufacturing, but no such consortiums are being set up in India.

“International consortia in Japan doesn’t really mean that their Korean and Indian counterparts will also join the bandwagon and do the same. Japan works in a different way than most other countries of the world. I have not seen European and American brands working that way. They do not even see eye-to-eye,” Singhal added.

Even if one might standardise battery packs, OEMs would not be comfortable giving access to data from their BMS and battery packs to third parties. Connecting battery swap stations to monitor charging status will also be susceptible to threats from hackers and data miners. As is well known, batteries lose their capacity with every instance of charging — the battery management system controls this facet and how much power is consumed by the vehicle in various states.

“Yes, there could be a protective layer of software and algorithms deployed at the swap systems but these would not be predictable in all the conditions. There could be entities willing to go the extra mile in order to be more competitive in the market,” said a source within an Indian EV on the condition of anonymity.

As battery capacity reduces, consumers will see lower mileage with time and there will be no guarantees that a fully-charged battery that has been swapped into the vehicle will last as long as the last battery used. 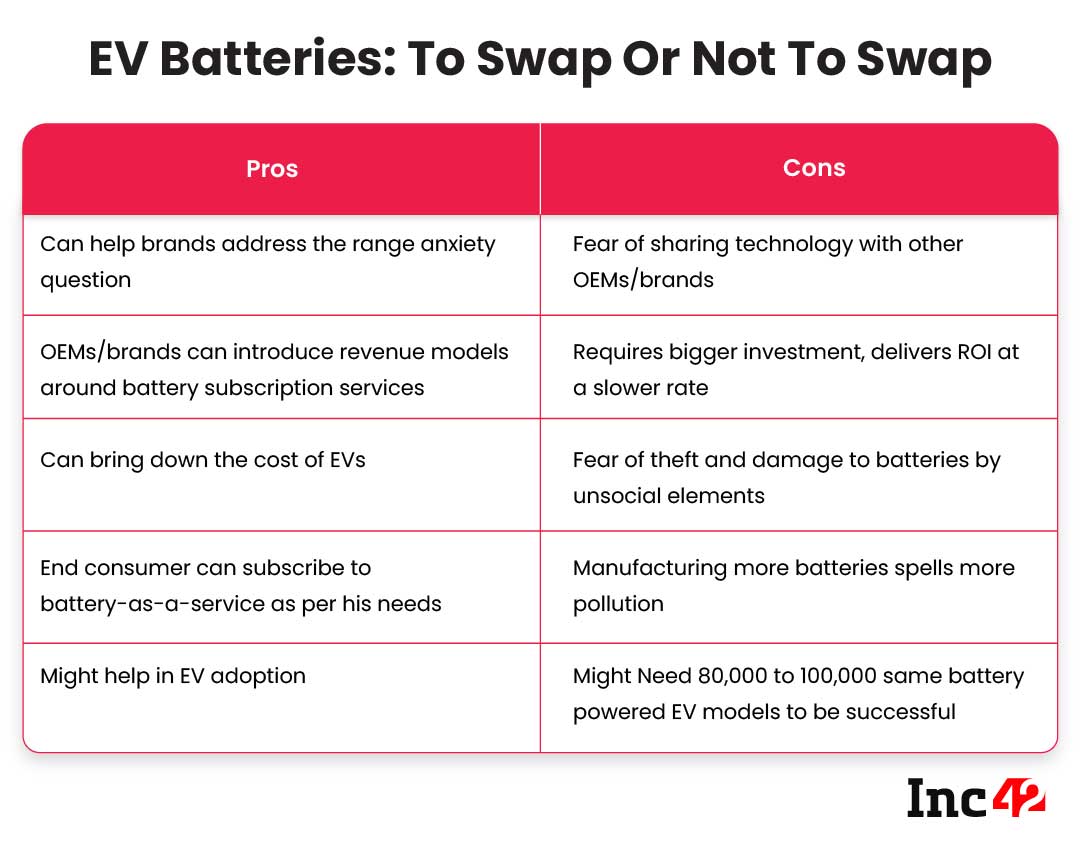 To Swap Or Not To Swap?

The opportunity for EV startups when it comes to battery-swapping could be in the battery-as-a-service business models which could range from monthly, yearly to daily subscriptions. It is also not clear if the brands and OEMs would want to collaborate and work on the same type of batteries to complement the upcoming battery swapping policy.

Here, the clauses and conditions of the yet-to-be-released battery swap policy will be most critical. Alwala Devender Reddy, CEO, EV maker Eride, believes that no OEM would want to share their technology with others to arrive at a common interchangeable technology like batteries. Unless the government insists on the use of one common battery design across all EV makers and defines the standards for battery firmly, this scheme will not move forward.

“The government is expected to come out with an incentive scheme under this new battery swap scheme in the next two months. It will also define the standards for battery design and charging which will ensure interoperability across different manufacturers of EVs. This will give the EV industry a much-needed boost encouraging investors to set up battery swapping stations,” said Reddy.

Battery swapping promises range extension for an EV within two minutes, but the same will require OEMs and brands to answer the questions around standardisation, data sharing and more. On the other hand, EV fast-charging stations have started delivering up to 80% of battery recharges within 10 to 15 minutes. Fast charging has largely answered questions around battery compatibility too since only charging standards need to be aligned, and not the whole BMS or battery maker.

In all likelihood, the government will push both fast charging and swapping and let the market decide which of these two will win out in the end.