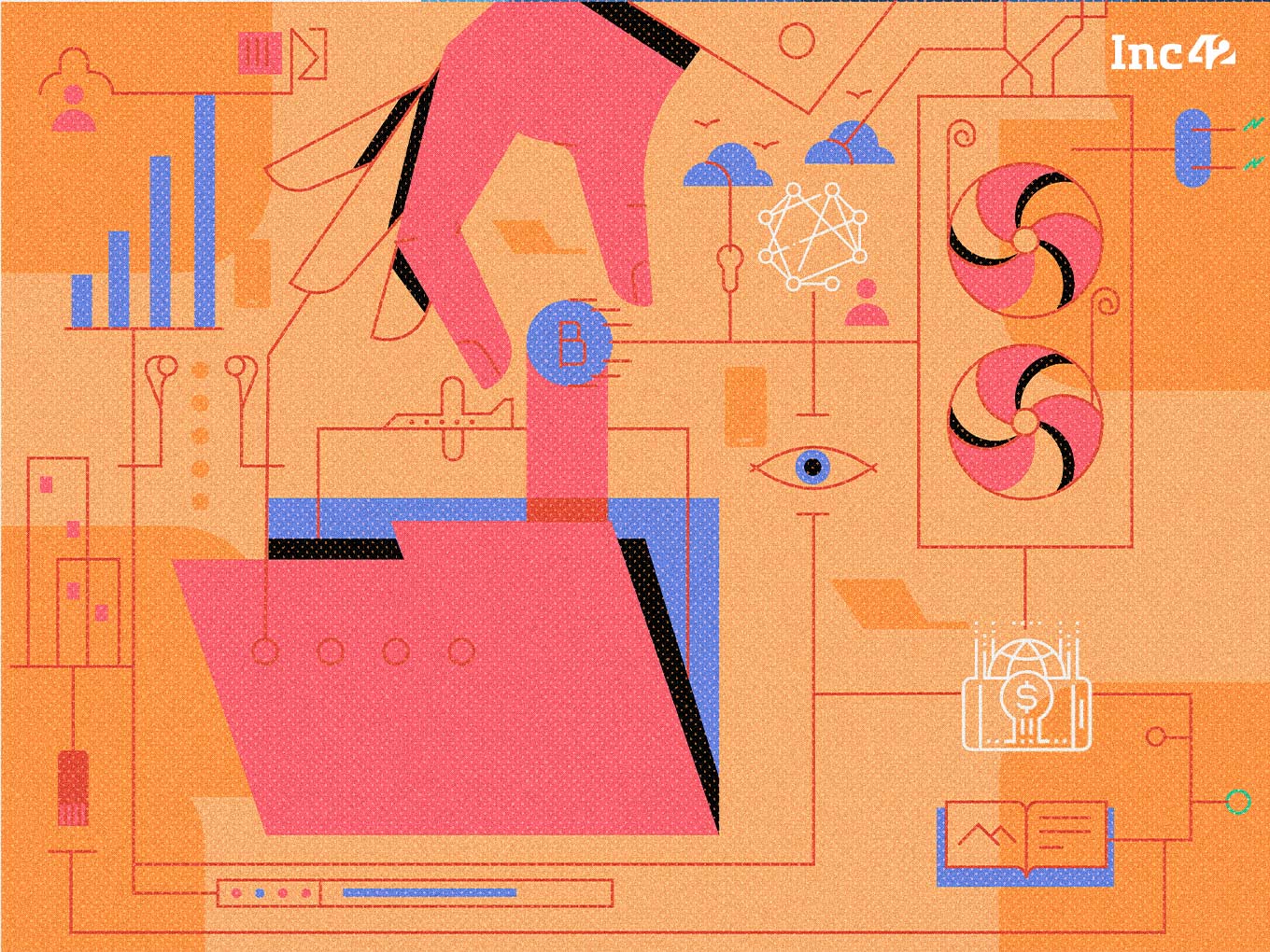 As prominent voices rally behind crypto and virtual currencies, it is essential to tread with caution

Many Indians were delighted when they found that the winner of the first NFT (non-fungible token) artwork auction was an Indian-origin crypto entrepreneur, Vignesh Sundaresan, who paid a record $69.3 Mn for a digital collage by Beeple titled Everydays: The First 5000 Days. Unlike traditional auctions, the biddings were done in the cryptocurrency Ether.

While the world at large is still trying to understand why a piece of digital artwork can be worth so much, technology enthusiasts and art connoisseurs are currently debating on social media if NFTs will be the future of buying and selling art.

But more importantly, the crypto auction conducted by the 255-year-old Christie’s has made people sit up and take notice of virtual currencies even as conversations about everything crypto have become more mainstream over the past year. It is not only due to the consistent rise in the value of popular cryptocurrencies traded on exchanges. The endorsements of popular technology entrepreneurs like Tesla’s Elon Musk, Twitter’s Jack Dorsey and VC Chamath Palihapitiya have played a pivotal role.

Of course, the hype has its impact on Indians too. According to Bitcoin marketplace Paxful, India’s weekly volume share of peer-to-peer crypto transactions worth close to 100 bitcoins on the platform eclipsed China’s 50 bitcoin for a brief period in March this year. Last year, India ranked second (after China) among the bitcoin-trading countries in Asia, both in terms of volume and value of the bitcoins traded.

However, the Indian government’s stand has not moved in line with crypto investors’ enthusiasm across the country. It has been dilly-dallying on a regulatory regime for crypto, and according to finance ministry officials, who do not want to be quoted, a ban on virtual currencies is imminent even as the government explores uses of blockchain in different sectors.

Yet, crypto enthusiasts are not giving up hope. In the past week itself, the technology and business community’s prominent voices have thrown their weight behind crypto and its many possibilities in India. For instance, noted crypto evangelist Balaji Srinivasan laid out in detail many of the use cases of integrating crypto with India Stack, the software layer that has made possible innovations such as the United Payments Interface (UPI), Aadhaar, DigiLocker, eKYC and more. 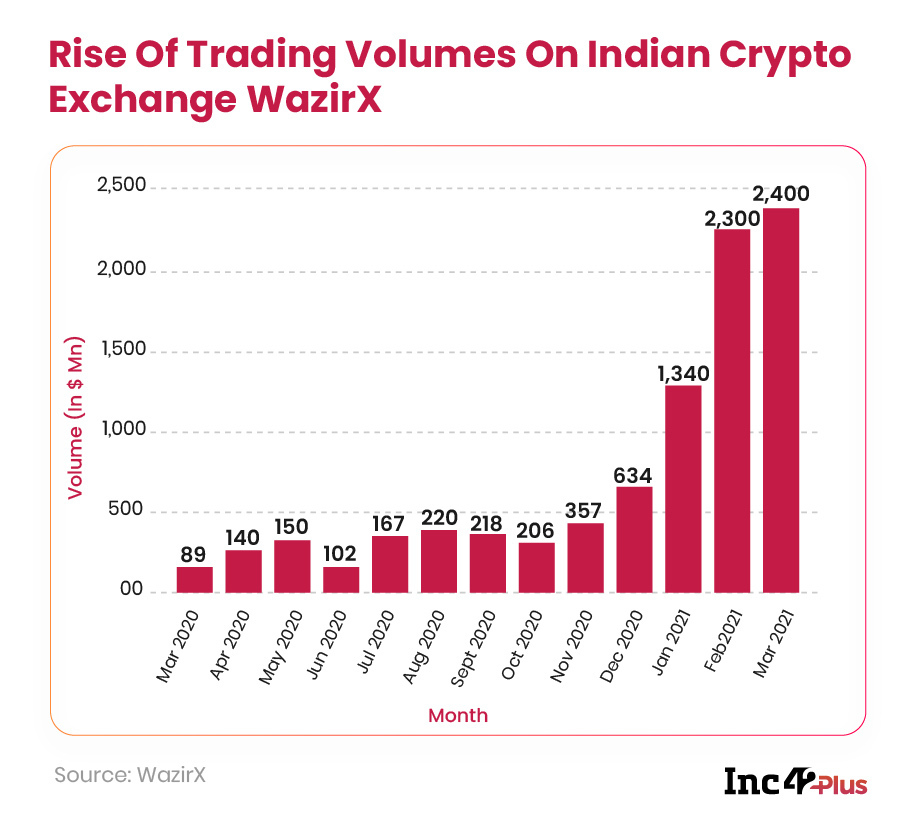 An exciting idea that has come up is: Could the $2 Tn world pool of crypto capital finance the massive scarcity of credit faced by small businesses in India? Nandan Nilekani, non-executive chairman of IT giant Infosys and the architect of India’s Aadhaar programme, tweeted in support, saying: “How does India become a $5 Tn economy? We’ll need to close the $250 Bn financing gap for India’s small businesses by attracting global, risk-tolerant pools of capital — and as iSPIRT details, the rapidly growing crypto economy may be one of the key ways.”

Yes, it is an idea that is too far ahead from a regulatory perspective, as is any innovation about crypto. But does it have merit from a purely economic standpoint?

Pronab Sen, former chief statistician of India and a veteran economist, says, “You can do one of the two things. First, you can buy whatever you want with crypto, which means your supplies or capital goods and land to run your business. Second, you can convert those cryptos into rupees, in which case you are essentially exposing yourself to variations in the value of crypto. Although the rupee valuation may also depreciate and appreciate, its supply is controlled by the government. So, what you are doing with crypto financing is that you are adding another dimension of risk.”

Also, the MSME financing gap is not the result of a capital shortage in the country or a lack of interest from international investors. It is an opportunity that everyone recognises but is unwilling to jump into unless the government guarantees a part of the debt through its own books. The reason why public-sector lenders end up being the only formal-sector lenders to this segment follows from this: Both central and state governments pick up the tab through loan waivers now and then.

There is yet another glitch in the idea. According to Anurag Jain, founder of invoice discounting startup KredX that lends to small businesses, “Today, local moneylenders own that market because they charge a very high rate of interest. If you want to replace that with crypto money from abroad, you will have to look at the kind of returns crypto lenders can get and the charges involved regarding rupee conversion or the costs due to currency fluctuation.”

To drive home the point, he gives the example of interest rates on deposits in India. Although the 5-6% levels in the country are far higher than the 0-1% range in many developed countries, we do not see foreign cash parked in Indian bank deposits.

But the biggest deterrent to crypto financing of India’s 60 Mn+ small and medium-sized businesses might be ceding control of their fortunes to investors and lenders in hoodies. When the push to become a self-reliant economy has led to restricting the influx of Chinese capital into Indian startups, wouldn’t opening up to crypto capital mean the same risk of playing into foreign hands? 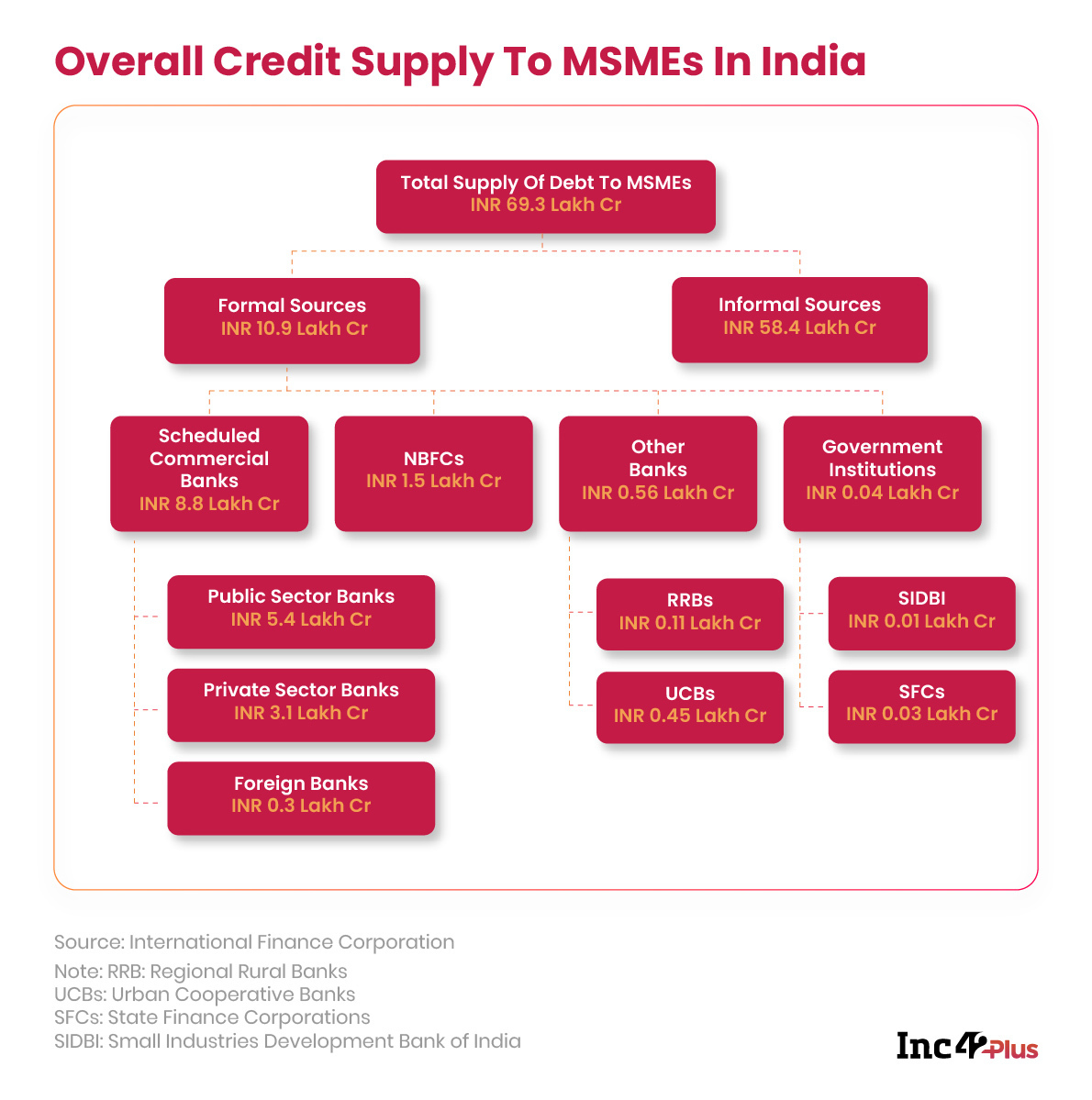 Upending The Banking System With A Digital Coin

Another exciting idea gaining traction is a national digital currency. The Reserve Bank Of India and NITI Aayog have said on multiple occasions that a digital version of the INR is in the offing over the past few years, but nothing concrete has materialised yet. On the other hand, China is getting closer to becoming the first country to launch an official digital currency.

With the excitement around cryptos all over the world, 86% of the 60 central banks surveyed by the Bank of International Settlements are now working on developing digital currencies. These currencies are being planned as virtual counterparts of the fiat currencies of the respective countries. The essential difference between the two is that a standard currency can only be transferred from one bank account to another digitally. But a virtual currency can be downloaded as files on a hard drive. In effect, this will reduce the importance of banks as deposit-taking institutions.

Noted financial commentator Andy Mukherjee recently suggested that RBI’s Retail Direct Programme — which seeks to ease investments by individual investors in the government bond market — could be a prototype for an interest-paying digital currency competing with traditional bank deposits.

This could be both revolutionary and a recipe for disaster, according to experts. “The point is that the banking sector’s ability to lend depends upon the amount of deposits they get. If there is a shift from bank deposits into a digital bond, the banks’ ability to lend will go down. I would say that is an insuperable problem, as the function of a bank is the creation of credit,” says Pronab Sen.

Others believe this can be a blessing in disguise to shake up the traditional banking system. Rajeev Mantri, founder and managing director of VC firm Navam Capital, thinks that legacy banks have had it too easy for far too long. Citing the example of Singapore, where a joint venture between a telco and an ecommerce giant has been given a banking licence, he says, “Why should we make it any easier for banks to continue their hold on financial services? They have to earn their keep.”

While an interest-paying virtual currency might be an excellent way to reshape the fintech landscape, it could also attract more first-time investors to cryptocurrencies like bitcoin. According to a finance ministry official, who does not want to be named, “A virtual currency will eventually introduce the masses to crypto, something that the government is planning to curb. If we are talking about digital transactions, a digital coin won’t be faster at scale than the UPI system anyway. As such, I don’t think any virtual currency will be floated anytime soon.”

The rise and rise of cryptocurrencies over the past decade means it is here to stay. As countries worldwide brainstorm on ways to capitalise on the crypto tide and the possibilities of a virtual currency, India may end up turning its back to the future if it does not foster innovations in this space. But the onus lies equally on entrepreneurs and experts to think through ideas as going overboard with templates of disruption may invite more naysayers than supporters. 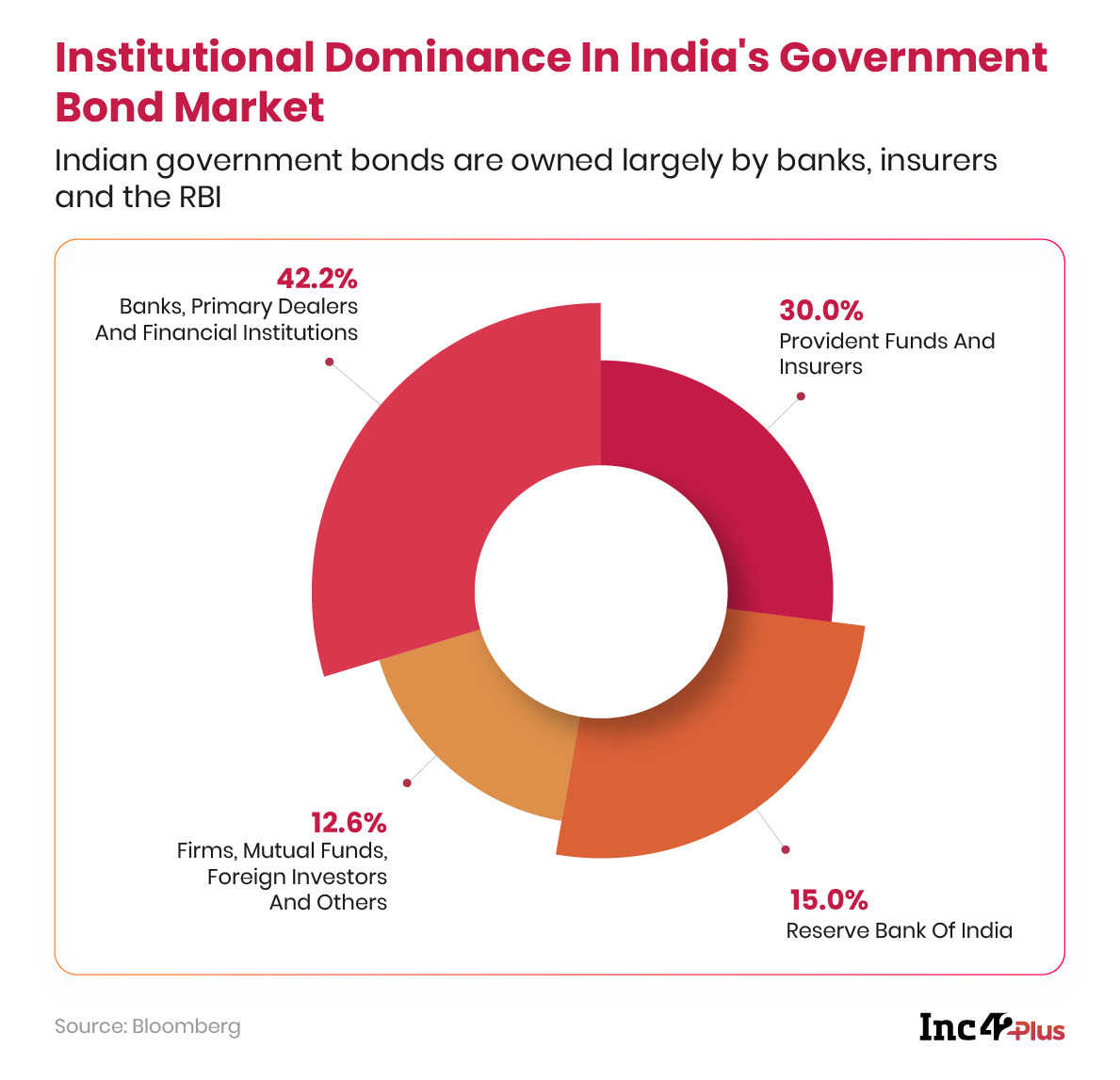 Tapping Into The Digital Transformation Of Banks

As banks look to transition into the digital age, there is a huge opportunity for startups to tap into their needs. That is why Zeta, a startup that offers a cloud-based neobanking platform to legacy banks such as RBL Bank, IDFC First Bank and Kotak Mahindra Bank, may soon become the next unicorn.

According to reports, Japan-based SoftBank is in advanced talks for leading a $250 Mn Series D round through its Vision Fund 2 in the five-year-old fintech startup. The round would value Zeta at over $1 Bn, up from $300 Mn in its previous Series C round in 2019, when it had raised $60 Mn. 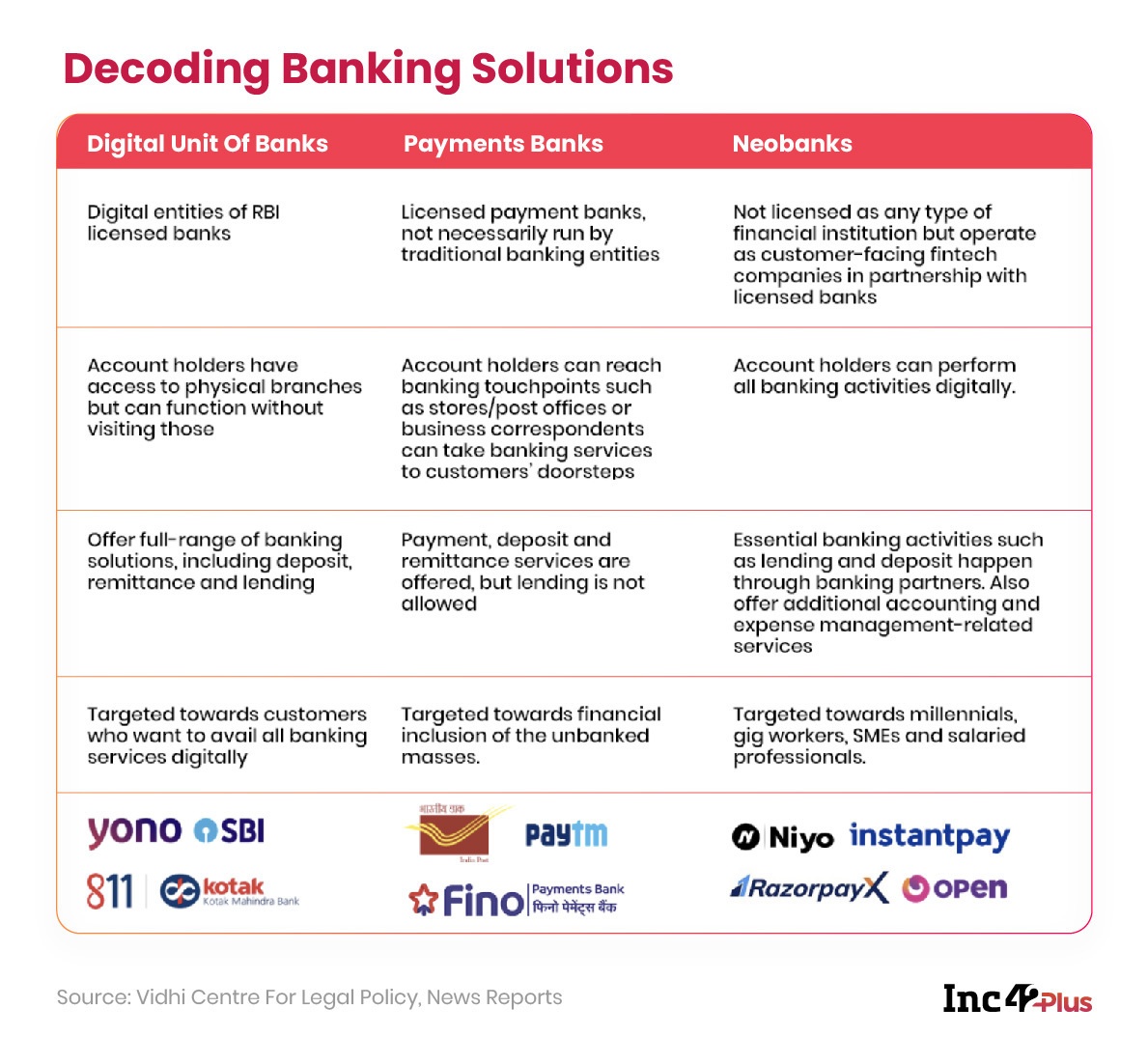 In what is being described as cryptocurrency’s inflexion point, American startup Coinbase, which allows people to buy and sell cryptos on its platform, has gone public this week at a valuation of $100 Bn. Some in the market are struggling to value the biggest U.S. cryptocurrency exchange, which has been unable to sustain its initial momentum after the stock climbed as high as $429.54 on its first day of trading on April 14.

Amid the fanfare on social media around the listing, several entrepreneurs and investors shared their comments and personal stories of interacting with the startup. Harshil Mathur, the founder of the fintech unicorn Razorpay, tweeted that he, too, has a Coinbase story to tell. 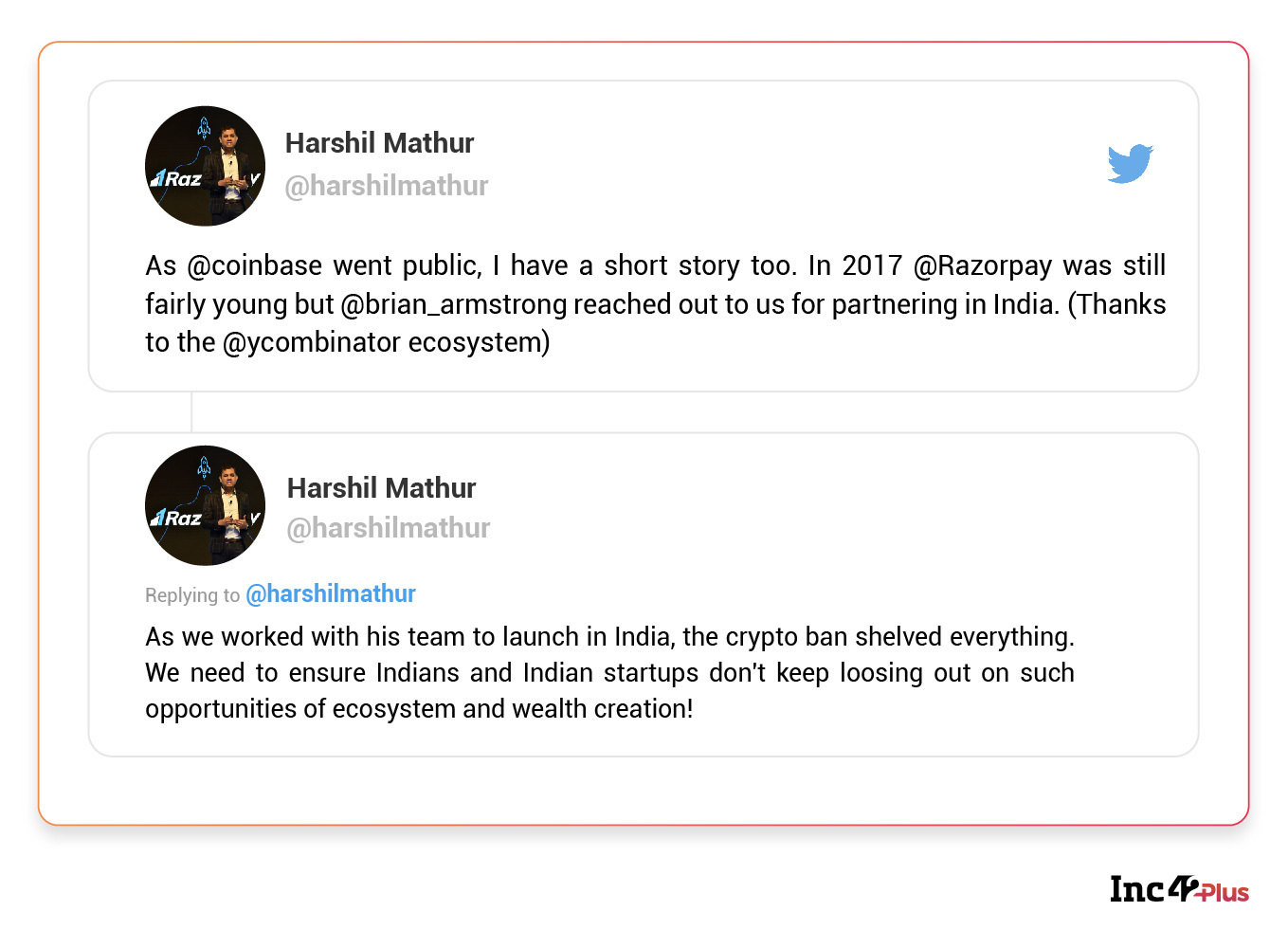 As Mathur’s story shows, India may have lost a few unicorns in the crypto trading space, thanks to regulatory flip-flops, and missed the opportunity to allow the country’s entrepreneurs to build innovative crypto products. One can only hope that a miracle happens soon and a regulatory regime lends credence to crypto-based products in the country. Otherwise, we will miss the bus again.