Not everyone can hope to win the first round of a bout with the richest man in India. But the scales have tilted in favour of the world’s second wealthiest man. In a Supreme Court ruling on Feb 22, the acquisition of Future Group by Mukesh Ambani-owned Reliance Retail was stayed in favour of Jeff Bezos-owned Amazon. The battle of the titans has seen widespread interest as the $3.4 Bn retail deal is likely to determine who gets to capture the footfalls in about 1,800 stores spread across more than 420 cities and towns in India. Understandably, both billionaires have a lot at stake, to say nothing of the Future Group that could face liquidation if the deal falls through.

In spite of the apex court’s decision, it was not a moment of jubilation for Bezos. But if you think the reason is Elon Musk pipping him to the No. 1 spot as the world’s wealthiest in a bitcoin bull run, you have gotten it wrong.

Right now, Jeff Bezos is more concerned about the reopening of a wound that refuses to heal. Last week, the Enforcement Directorate (ED), a central government agency that carries out investigations into large financial improprieties, was reported to be preying on Amazon’s India business once again.

This happened after a report alleged that the ecommerce behemoth hid the fact that 35% of its India platform sales revenue in early 2019 came from just two sellers in which it had indirect equity stakes. Also, a group of 33 sellers on the Amazon India platform — a drop in the ocean of 400,000 sellers at the time — accounted for nearly two-thirds of the online sales. 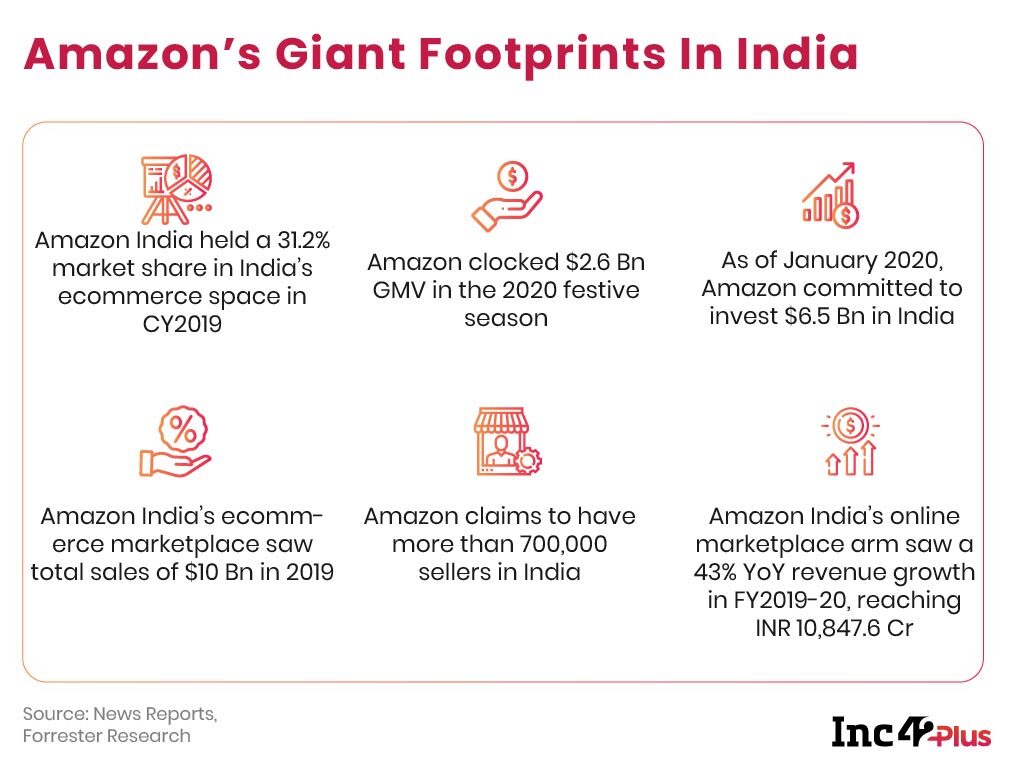 In the face of renewed calls to probe the company’s workings, Amazon India head Amit Agarwal said, “There is a deliberate, organised effort by vested interests to create sensation and discredit Amazon.” The ecommerce giant has maintained that it is compliant with all existing laws and cannot be blamed for past actions in the context of current regulations.

But the truth of the matter is that the intent and interpretation of the law do not sit well with each other. In December 2018, the Department of Industrial Policy and Promotion (DIPP) issued a press note (known as Press Note 2) to deal with the ecommerce companies’ complex machinations, which had resulted in what small traders termed as ‘predatory pricing’ to kill competition.

The circular effectively says that an ecommerce marketplace cannot sell inventory that it owns, directly or indirectly, on its platform. It was thought to be the end of two prevalent practices — owning a stake in sellers and selling private labels. But as in many cases, the government’s U-turn sometime later blunted the policy. (Amazon and Flipkart reportedly restructured their holdings in key sellers to comply with the rule of not owning inventory.)

“Over time, an aggressive push by the ecommerce majors to force the government into a parley seems to have paid off. While the government has clarified that there is no ‘restriction on the nature of products (private labels) sold on the marketplace’, the guidelines, when read comprehensively, imply that Amazon or Flipkart cannot sell its own products and private labels,” says Salman Waris, a senior technology lawyer at the Delhi-based law firm TechLegis. 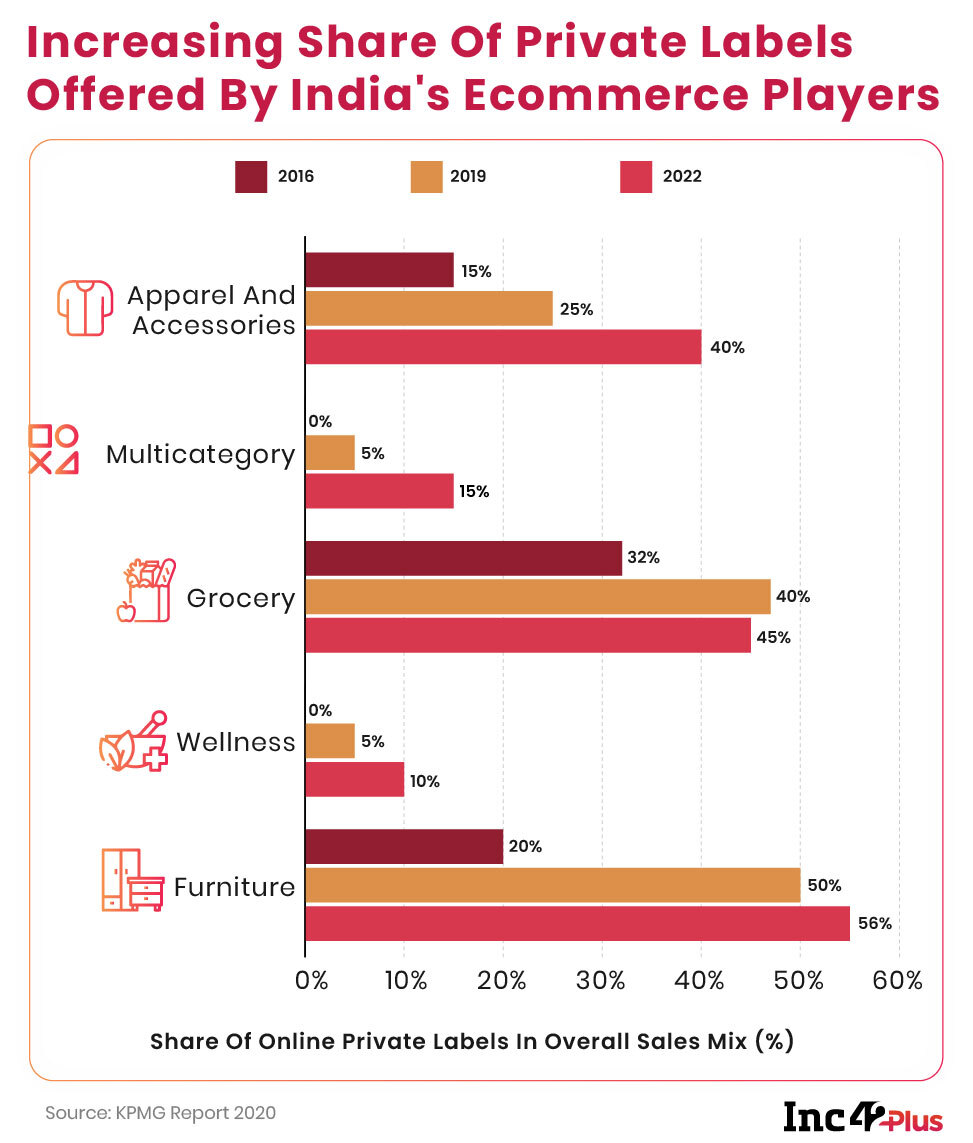 The Ecommerce Hall Of Mirrors

But why do ecommerce marketplaces persist in holding stakes in sellers and owning private labels despite the threat of a regulatory doomsday? The answer lies in two critical pieces of the jigsaw puzzle — more revenue and better control over the supply chain.

Understanding the first part is not difficult. When a consumer buys a product from a seller in which an ecommerce company holds a stake, the platform is actually making revenues on two fronts. There is the marketplace arbitrage in terms of advertising, shipping, warehousing and other fees and then a portion of the seller’s revenue.

For example, the global e-retailer clocked INR 7,593.5 Cr in revenue in FY2018-19 from its Indian marketplace arm Amazon Seller Service, and it also had the opportunity to benefit from the INR 8,900 Cr earnings of Cloudtail India, a seller in which it has an indirect equity stake.

Now, the thing about controlling the supply chain. According to Sreedhar Prasad, a veteran management consultant in the consumer internet space, “If Samsung is giving a deal in, say, China or Korea, the buying arm of a very large marketplace will be able to strike a deal. In that scenario, they (ecommerce companies) get it at a totally disproportionate margin because they are directly buying from those big brands. Also, that margin translates into a better customer experience through discounts or other avenues.”

A look at the listings by two of Amazon’s biggest sellers — Cloudtail India and Appario — further reveals that the former sells 900,000+ items on the marketplace, including FMCG brands such as Dettol, Pigeon, Surf Excel, Parachute, Dabur and more, while the latter deals in 80,000+ items from electronics brands like Apple, JBL, BoAT, Xiaomi, Realme and Nokia.

According to some media reports, the US tech giant gave preferential treatment to a select group of sellers by providing more commissions and used the group to bypass India’s FDI restrictions in ecommerce, which were put in place in 2018 through Press Note 2. However, Amazon has refuted such claims and said that it complies with all regulatory requirements.

Interestingly, a few top sellers on Amazon India have names with seemingly connected nomenclatures such as Cloudtail India, Cloudtail Business and Cloudtail Pantry; Appario Retail and Appario Business; Darshita Etel and Darshita Electronics. Although each of these individual entities might be compliant with the regulatory norm of not selling more than 25% of its inventory on a single marketplace, does that serve the intent of the law in spirit?

After all, Press Note 2 says if a vendor sells more than 25% of its goods on a single ecommerce marketplace, it will be assumed that the marketplace controls its inventory. 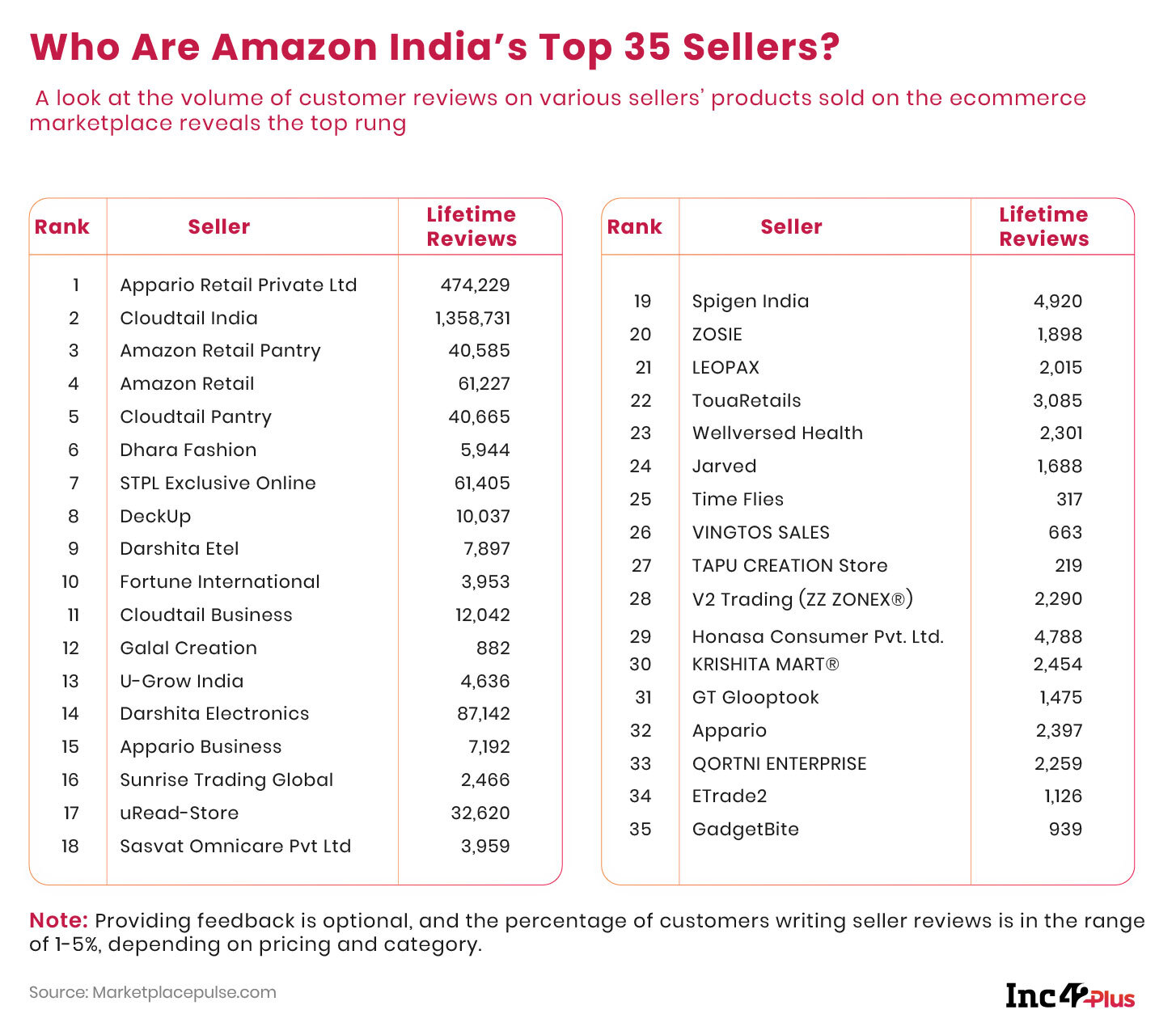 The Smartphone Market: Is It The Harbinger Of Indian Retail’s Future?

While this game of smoke and mirrors might be essential for the Amazon model of ecommerce to thrive in India, it is bound to have many victims. The first kind, of course, will be the sellers who do not have the clout or the money muscle to strike favourable deals with global brands like Apple, Samsung and Xiaomi. These sellers will eventually wither away as a select set of vendors become monopolistic suppliers across the Indian market.

Another set of victims of this ecommerce juggernaut will be the brick-and-mortar outlets. “Samsung claims that it has launched its ‘M’ series of smartphones offline and online. But when you go to an offline store, you will find that there is no stock. Smartphone brands supply very little stock to offline stores for certain series which are designed to be online-heavy due to exclusive deals,” an analyst who tracks the smartphone market has told Inc42 on the condition of anonymity.

In fact, online channels held a 43% share in India’s online smartphone market in Q2 2020 (July-September), according to a report by Counterpoint Research. However, the rise in the market share of online channels was partly due to the pandemic, as physical markets were closed and people were mandated to stay at home during multiple lockdowns. The quarter also saw Amazon India reach its highest-ever share of 47% among online channels, compared to Flipkart’s 42%. 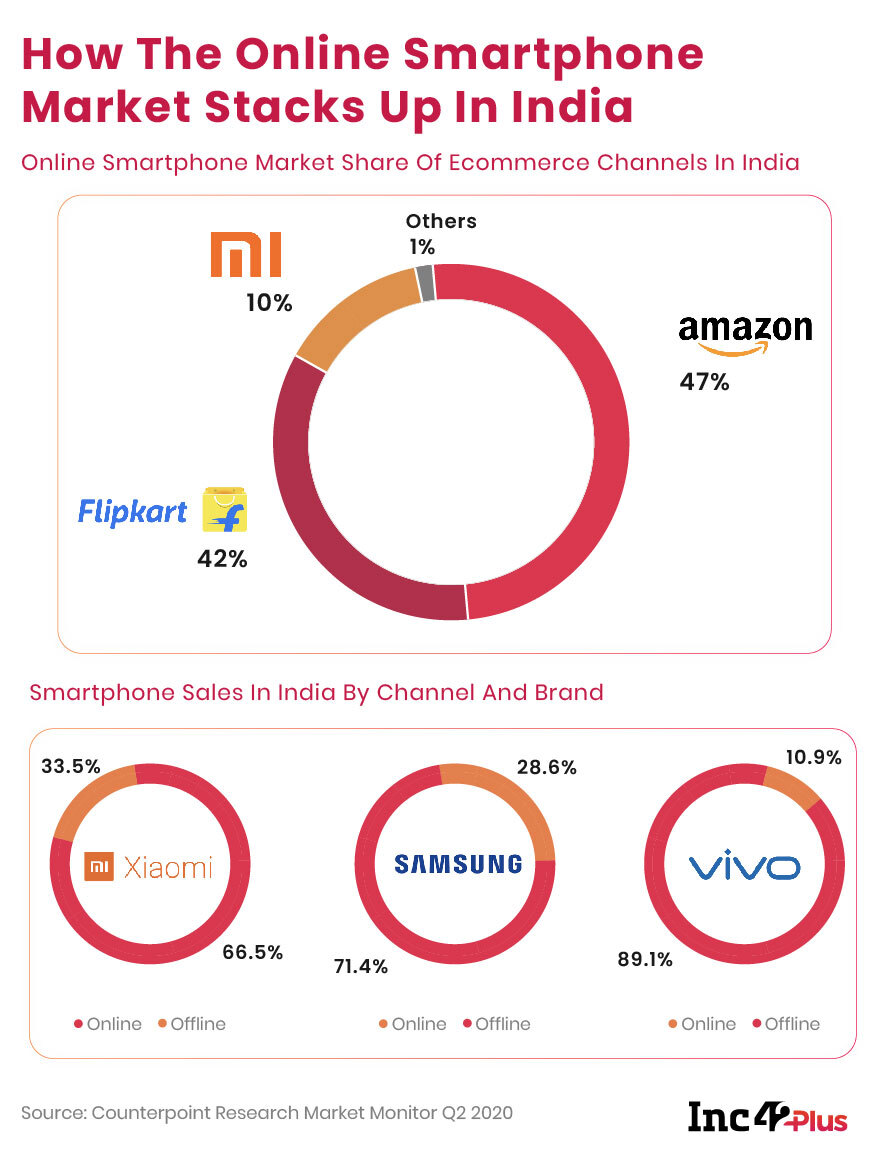 But the situation was, indeed, grim even a year before the black swan event swept the country. In a letter to the government in September 2019, the All India Mobile Retailers Association said, “The predatory online pricing and exclusivity have damaged the ecosystem of the trade beyond repair. More than 30,000 mobile phone retail outlets have been shut down in the past one year.”

However, the biggest victim of the lot will be the up-and-coming startups in the social commerce space or even an entrepreneur looking to start an ecommerce marketplace. While the former will be compelled to route their sales through one of the ecommerce giants, the latter will not have a fighting chance of survival in a market dominated by the Flipkarts and Amazons of the world.

We are not playing the blame game here. True to its nature, any technology business will be disruptive and it will scale exponentially. But shouldn’t that happen on a level playing field? Otherwise, there won’t be much difference between today’s tech billionaires and the commodities magnates of yesteryears.

It is not the best of times for Silicon Valley giants in India. A couple of days ago, the government came out with a 29-page document that defines how digital media platforms, including social media and the OTT, will be regulated in the country.

It is an overarching policy that has tried to achieve multiple objectives at one go — placing digital media on an even keel with TV and print media regulations, creating a compliance mechanism that gives the government the right to object (against a piece of content for several reasons) and the authority to enforce (the content takedown) and allowing users to have a say in their identity verification by validating their phone numbers, among other things.

But the tightening of the compliance noose will be felt the most in the formalisation of the government’s power to tell a digital platform to take down objectionable content within 36 hours. Ravi Shankar Prasad, the minister of electronics and information technology, left no doubt about who would be at the receiving end of the guidelines as he read out the names of the ‘significant social media intermediaries’ in the country at his press conference: WhatsApp (53 Cr users in India), YouTube (44.8 Cr), Facebook (41 Cr), Instagram (21 Cr) and Twitter (1.75 Cr).

But what used to be a lucrative business strategy for offline retail soon got replicated in the online world as a key arsenal to bolster growth. In the past four-five years, the likes of Amazon, Flipkart, BigBasket and others are steadily launching their ‘own’ brands and scaling them up as these are a win-win for both consumers and e-retailers.

An Inc42 Plus article has taken a deep dive into the business of private labels in this country, analysed the current trends, and tried to answer a critical, almost existential, question: Will these in-house brands make ecommerce profitable in India? Although the ecommerce giants — backed by an unending flow of billions of dollars — are disrupting local businesses in the country, they are yet to turn in profits.