When it comes to owning electric vehicles in India, range anxiety is often followed by charge anxiety

While Indian companies are launching new EVs by the week, how many charging stations will India need in the future?

Here’s the math behind EV charging from the point of view of infrastructure, cost of energy and source

Range anxiety? Today, this is not the only concern for electric vehicle owners in India. Electric vehicle charging players are tackling a much bigger problem — charge anxiety.

While range anxiety deals with the trepidation for the number of kilometres an electric vehicle will run, charge anxiety, on the other hand, is about whether or not the electric vehicle will find a charging station in the first place. If that sounds familiar, that’s because it’s something most of us are familiar with when it comes to smartphones and laptops.

According to a MarketWatch, at present, there are about 250 public charging stations operating in India. In the coming days, the number of charging stations is expected to witness massive growth. As per Kenneth Research, the Indian electric vehicle infrastructure market is expected to grow at a compound annual growth rate (CARG) of over 40% during a forecast period 2019-2025.

But the real question is how many EV chargers would India need to support its overall goal of 30% EVs on road by 2030.  Inc42 spoke to auto giants who have invested heavily into EVs as well as charging station providers to arrive at a ballpark figure for the EV charging infrastructure needs.

But before we dive into the math for the infrastructure, let’s take a look at what’s happening on the ground in terms of charging stations and how EV users are using them.

Many experts believe that there is a need for a transparent solution or a platform where the car owners can view nearest charging stations, record data and check the battery status of the vehicle in real-time to eliminate this fear. Commenting on the same, Varun Chaturvedi, MD and CEO of Volttic EV Charging, told Inc42 that the company is developing safe and reliable EV charging infra for faster adoption of EVs within India. “For this to happen, we are installing a smart EV charging station where we can easily map the energy requirement with our analytics platform on the go,” he added.

Besides this, the quality of the electricity coming in from the grid plays a pivotal role in eliminating the ‘charge anxiety’ among the consumers as well as electric vehicle charging manufacturers.

Maxson Lewis, cofounder and managing director at Magenta Power and ChargeGrid, which is one of the early entrants in the Indian charging infra space, also told Inc42 that the electric vehicle charging infrastructure in the country cannot be copy-pasted from international solutions. Challenges like heat, humidity, harmonics and humans are unique for the Indian ecosystem. Additionally, we have a low takeoff, which pushes electric charging station operators to focus on business outcomes.”

“The concept of stabiliser is unheard of or redundant in the European and the US market as the quality of electricity supplied from the grid to charging station is of the highest efficiency,” said Lewis.

The Math For Electric Vehicles Charging In India

In a bid to quantify the charging infrastructure required to sustain one million electric vehicles in India, we need to understand the various types of electric vehicles, be it 2W, 3W, 4W and others.

For instance, Mahindra eVerito, Tata Tigor, Tata Nexon, Hyundai KONA Electric, MG ZS EV and Tata Tigor have a battery capacity of 16 kWh, 21 kWh, 30.2 kWh, 39.2 kWh and 44.2 kWh, respectively. Battery capacity along with factors such as temperature, humidity and charging ports plays a vital role in maintaining the efficiency of the vehicle. For the sake of the calculation, we would be considering the average battery capacity, which is 30 kWh.

Theoretically, to sustain the growth of one million electric vehicles, India will need about 4 Mn (100kW) fast-charging stations, which will charge the vehicle in 1-2 hours. However, as per DataLabs by Inc42 estimates, India will need 2 Mn (mix of both fast and slow) charging stations to sustain 1 Mn electric vehicles on the road in each city or region.

On a full charge, an electric vehicle with a 30 kWh battery can easily last for two-three days of typical usage and idle drain. “Today, if we consider 30 kWh battery size car as a default vehicle, it consumes roughly about 15 units of electricity,” said C K Sreenath, deputy general manager of Smart Grid and Electric Vehicles at Bangalore Electricity Supply Company Limited (BESCOM).

According to the government of India’s Energy Efficiency Services Limited, which is the world’s largest public-sector energy service company, India will have 79 Mn electric vehicles will be on the road and 8 Mn public charging stations (slow and fast) will be installed by 2030.

In line with that, giving us a bigger picture, Magenta Power’s Lewis said that for 1 Mn electric vehicles, assuming an average battery capacity of 30 kWh, India needs about 15 Mn units (kWh) of electricity per day, based on EESL’s findings.

At present, the electric vehicle charging infrastructure is predominantly categorised into two categories — slow chargers (3-4kW) and fast chargers (50-100 kW). Chaturvedi from Volttic further explained, “On average, a public charging station will require almost 100 kW of load and if we are targeting one charger on 50 EVs, almost 20,000 EV charging stations are required with demand up to 2000 MW.”

Energy experts believe that the quality of electricity supplied to the grid is directly proportional to the efficiency rate generated from coal (varies on types) at thermal power plants. Experts further told Inc42 that companies like NTPC offer a very good efficiency rate of 98% at some stations. However, state-owned utilities are still struggling to maintain 50% of efficiency rate.

Magenta Power also said that electric vehicles are not a solution unless the source of supply is renewable and clean. “As the usage patterns and economics allow, we will be moving to a 100% clean energy-based charging portfolio,” said Lewis.

Mahindra Electric claimed its flagship electric vehicle eVerito has a battery capacity of 16 kWh and can travel up to 181 km, on a full charge. It takes about 11 hours 30 minutes to charge the vehicle with a slow charger and 1 hour 30 minutes with fast charging. Cost-wise, it comes to somewhere around INR 1.15 of electricity for every kilometre travelled, assuming 18 units of electricity have been consumed at INR 7, travelling at a range of 110 km.

Mahesh Babu, CEO of Mahindra Electric, told Inc42 that the company has huge plans to develop the electric vehicle ecosystem and will focus on developing charging infrastructure in India. “Made-in-India electric vehicle technology will soon be exported to Korea and Europe. We have also invested in a connected mobility solutions platform called NEMO (Next-Generation Mobility) that has enabled the adoption of electric cars in the fleet segment,” added Babu.

The Cost And Energy Consumption Math For EV Charging

Today, coal is being used extensively to generate electricity and India imports coal from other countries such as China, Indonesia and Australia at sky-rocketed prices. Talking about prices. BESCOM’s Sreenath further shared that the current tariff price for the electric vehicle charging stations is highest in Karnataka, when compared to other states and union territories.

According to BESCOM, the current fixed charges per kW for low tension (LT) voltage (AC – slow chargers) is INR 60 per kW, and for high tension (HT) voltage (DC – fast charges) is INR 190 per kW for high voltage line. The rate charged per kWh unit is INR 5, irrespective of the consumption pattern for electric vehicles.

Considering an average of 15 units of electricity is consumed per day to charge EVs, the charging price would be around INR 75 per day based on the average battery size of 30 kWh. 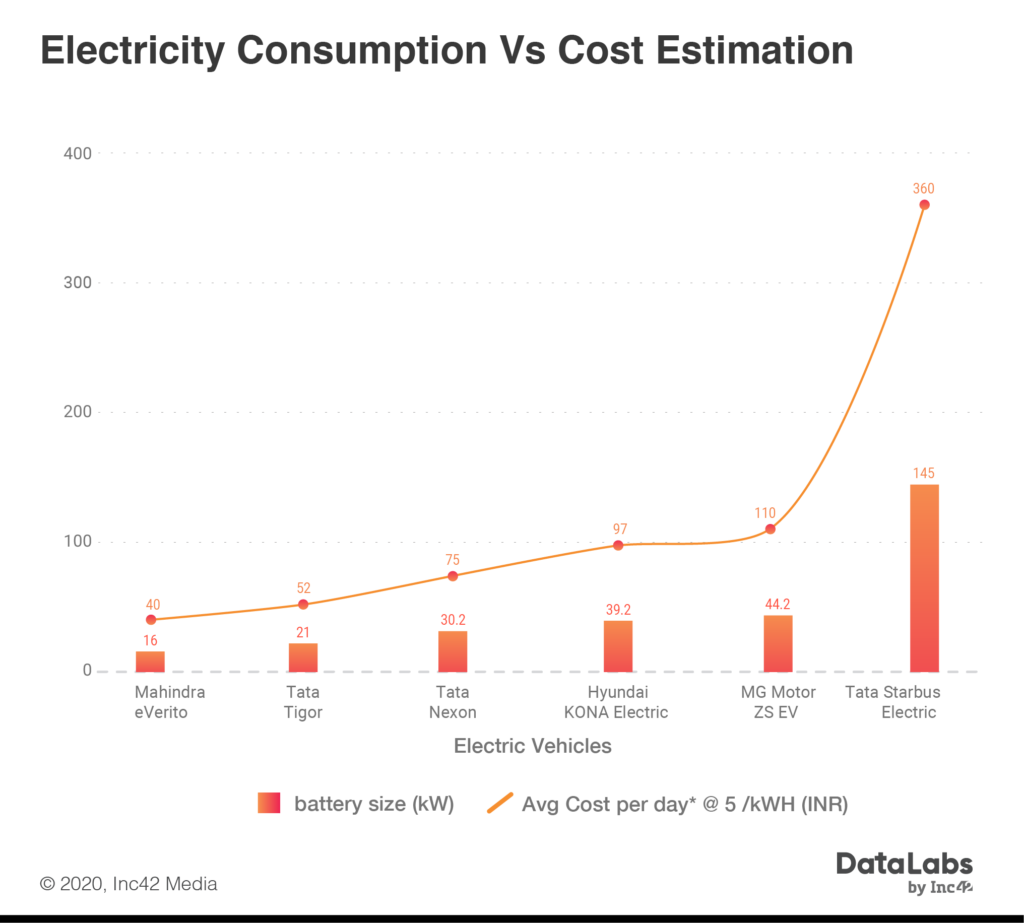 So for a million EVs, the collective cost will be close to INR 75 Mn (7.5 Cr) per day, and about INR 27.37 Bn (2737 Cr) per year only for charging electric vehicles. And that’s just for a conservative estimate of 1 Mn EVs with average battery capacities.

As the consumption of electricity increases, the need for producing green electricity also increases. Logically, the only way forward to match the supply and demand of electricity consumed by EVs calls for renewable sources. If this is not addressed in the coming days, there will be a shortage of power generation and so-called ‘energy anxiety’ might be the next big thing in the electric vehicle ecosystem.

According to industry experts, for five sun hours per day, solar generates 15 kW of DC power per day and around 100 kWh of AC power per day. On average let’s assume solar generates 50 kW per day. Therefore for one million electric vehicles, India needs about 50 MW of electricity per day generated from renewable energy, for the average battery size of 30kWh.

This, in a way, calls for setting up close to 50,000 kW solar power plants across India to sustain one million electric vehicles. A single 1 kW solar power plant ideally produces anywhere between 4-5 kWh (units) of electricity per day depending on the sunlight it receives.

Volttic’s Chaturvedi told Inc42 that as the Indian government aims to produce 175 GW by 2022, there will be more renewable energy injected at the grid which at present is almost close to 23%. In the coming days, this is going to double and thermal/fossil fuel-based power generation ratio will come down gradually, and energy used to charge the electric vehicle will be more on the renewable side.

Niti Aayog CEO Amitabh Kant also said that energy distribution companies (DISCOM) will become inefficient because of the huge amount of subsidisation of electricity. He further said that in the next two to three years, battery storage will take off in a very large manner and India will generate renewable power, store and most importantly supply it efficiently than the traditional DISCOMs.

However, setting up a solar power plant for feeding the charging stations in India is a bit of a challenge at the moment as there involves a huge amount of capital expenditure in setting up DC fast charger at public charging stations for 25 kW to 100 kW batteries. “Once there is some regular utilisation of 8 to 10 hours daily then, we will go for dedicated solar energy source which makes sense on economic variability,” said Chaturvedi.

He further said that developing such a solar plant requires a lot of space, which may not be the case at every public charging station, especially those within the city. “We will have to install EV chargers with PPA models from solar developers on the MW scale. That can be only feasible when we have a minimum day time use of at least 8-9 hours,” the Volttic founder added.

Many experts believe that as the technology evolves, it will promote the usage of renewable energy utilisation for charging electric vehicles, where it can be charged in day time with cheaper rates of renewable energy and excess energy will be injected in grid (battery storage) to reduce the grid load, and at the same time make revenue. So the future of electric mobility will combine renewable sources with battery storage and charging.