The Crusaders: Robots From Asimov, Milagrow, PerSapien Add Another Dimension To Covid-19 Fight

The Crusaders: Robots From Asimov, Milagrow, PerSapien Add Another Dimension To Covid-19 Fight 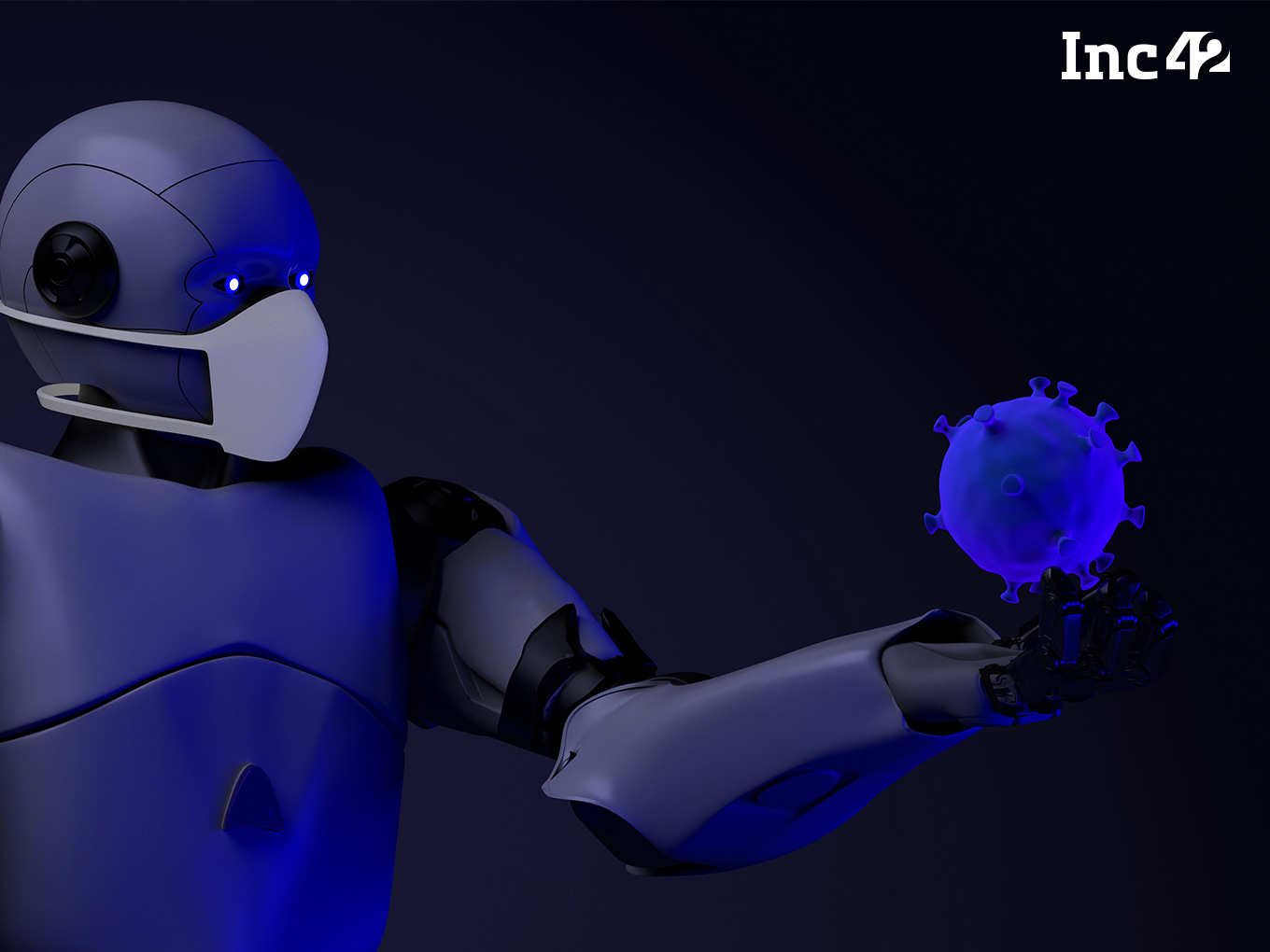 In the last half-decade, automation has become a major business buzzword. Human jobs in manufacturing, industrial units, data-entry, analytics and many other roles being replaced by robots and automation to save time, manpower and cost.

According to a 2019 report by the International Federation of Robotics (IFR), 3,412 robots were installed in India in manufacturing plants in 2017, but it’s not just automotive, electronics and packaging industries that are finding new roles for robots. With the Covid-19 pandemic shining a light on sanitation requirements in hospitals and quarantine centres, robots have come to replace human cleaners as well.

In the last month or so, robotics solutions from India’s startups have supported the public healthcare infrastructure of the country. Robots are sharing the workload of frontline staff battling Covid-19 in India. From disinfecting zones, dispensing hand sanitisers to monitoring patients and also serving meals and medicines — more and more hospitals are deploying automated solutions for these tasks.

In hospitals across the country, doctors and healthcare professionals are striving to save the lives of thousands, while also risking their own. In many instances, doctors have contracted the disease while working in Covid-19 facilities with some even losing their lives.

To tackle this, Asimov Robotics and Milagrow have partnered with hospitals to offer a potential solution through their robots which minimise the physical interaction between patients and doctors. Robots are also replacing nurses and ward attendants who usually bring medicines and food to the patients in Covid-19 wards.

Kerala-based Asimov’s KARMI-Bot ensures that patients get timely meals and medicines without any human interface. Founder Jayakrishnan T told Inc42 that the KARMI-Bot can fulfil all duties that frontline staff is expected to perform. “After giving food and medicine, KARMI-Bot asks the patients if they are well or need to talk with a doctor. The humanoid has a display on the chest which facilitates the interaction between the doctor and the patient.”

At the same time, KARMI-Bot also collects medical waste and garbage in a case that supposedly kills the virus through ultraviolet light. However, UV cleaning is only activated when the robot is in motion as it is harmful to humans on exposure.

The KARMI-Bot can carry a payload of 25 KG and can move at a speed of 1 m/sec. Jayakrishnan said that two such robots have been deployed at a hospital in Ernakulam in Kochi. Meanwhile, actor Mohanlal Viswanathan’s ViswaSanthi Foundation has donated a bot to the isolation ward at Ernakulam medical college in Kalamassery.

Milagrow founder Rajeev Karwal told Inc42 that the robot was developed on the request of the administration of the All India Institute of Medical Sciences (AIIMS). He said that AIIMS was worried about the increased number of Covid-19 cases among doctors and healthcare workers. “We thought that we can install certain applications in our existing robots which can help doctors talk to the patients without meeting them,” Karwal added.

Milagrow developed three apps — the first one facilitates doctor-patient interaction, another app helps doctors control and manoeuvre the robot, while a third app broadcasts a live audio-video feed to healthcare workers and doctors. “The robot detects minutest of the audio disturbances and can alarm healthcare professionals if any patient needs immediate supervision,” he added.

The robot also facilitates video interaction between patients and their relatives. The Humanoid ELF can also navigate inside a facility on its own with its array of 60-plus sensors. Moreover, the robot has a battery life of eight hours and has an auto charging feature as well.

Bengaluru-based Invento Robotics has gone a step further with its robots named Mitra and Mitri. These can be deployed at the entrance of a hospital and are the first point of contact for any visitors. They not only dispense sanitisers but also collect patient information. Meanwhile, a thermal camera is mounted on the robots to measure the body temperature of the patients entering the facility.

If a visitor or patient shows no signs of Covid-19 then the robot can refer the visitors to a human receptionist. However, if something abnormal is detected, then it takes the patients to a separate room where another robot facilitates interaction with the doctor through a screen.

Coronavirus has turned many hospitals into pandemic hotspots due to improper sanitisation, lack of disinfectants and PPEs. In many hospitals, frontline workers are manually disinfecting quarantined areas, thereby exposing themselves to the disease.

Milagrow’s iMap 9 robot helps facilities properly disinfect specific zones inside the hospitals. Milagrow’s Karwal said iMap 9 is a floor disinfecting robot that can navigate and sanitize the floors without any human operator. It is claimed to have the capability to kill virus particles on floors and surfaces using a sodium hypochlorite solution. The same solution has been recommended by the Indian Council of Medical Research for disinfection in Covid-19 wards.

Karwal said iMap is guided by technologies such as LIDAR and advanced simultaneous localisation and mapping (SLAM), which is currently being harnessed by those making driverless cars.

Its patented real-time terrain recognition technology (RT2RT) can scan floors six times per second in real-time. Milagrow claims that iMap9 has a scanning accuracy of up to 8mm over a 16m distance.

Besides disinfecting floors, iMap is also said to be killing the virus particles in the air. Karwal said that most bacterias and viruses have positively charged ions and iMap releases negative ions in the air which neutralises them and brings them down to the ground. “Once they reach the floor, iMap kills these viruses with the chemical solution,” Karwal added.

Moreover, it can also cordon off areas and perform sequential cleaning of zones based on specific needs. Karwal said that iMpap is currently being used at AIIMS in Delhi and private hospitals including Moolchand and Fortis. “We’re in talks with hospital chains like Apollo, Cloud9 Hospitals, among others,” he added.

UV Light Comes To The Rescue

While many robots are using disinfectants, some are using ultraviolet light to disinfect specific zones in hospitals. UV light can be harmful to humans, so using them with robots is a good fit.

For example, New-Delhi based PerSapien has developed the ‘Minus Corona UV Bot’ mini robot to sterilise corridors, wards, ICUs and patient rooms. The robot does so by using ultraviolet light which has a wavelength of 254 nm. A UV-C lamp is mounted on the top of a wheeled robotic platform which can be controlled by remote control.

PerSapien’s mini robot eliminates the need for human personnel for sanitisation and allows remote monitoring through a camera. A similar robot was sold by Denmark-based UVD Robots to hospitals in Wuhan, China. While UVD Robots charged around $80K to $90K for its robots, PerSapien is selling these at a fraction of the cost for around INR 25K ($330).

Founded by Stanford University researchers Debayan Saha and Shashi Ranjan, PerSapien is also working on other projects to defeat coronavirus in India. Ranjan told Inc42 that the robot has been placed in Kolkata in Don Bosco School and Narayana Multispeciality Hospital. Some facilities in Hooghly District of West Bengal are also using the robot currently.

Meanwhile, Hyderabad-based Mekins Industries has launched a trolley-like UVC-based disinfectant system. The automobile packaging manufacturer has developed the prototype in partnership with International Advanced Research Centre for Powder Metallurgy and New Materials (ARCI), autonomous research and development under the department of science and technology (DST).

Mekins is using UV light in the range of 200 and 300 nm for killing the virus. As UV spreads in all directions, the trolley can kill microorganisms in both air and on surfaces. Founder Mayank Agarwal said that he got inspiration from a tweet from business tycoon and Mahindra Group chairman Anand Mahindra.

So, so proud of our Kandivali & Igatpuri teams who confined themselves to the factories & without sleep produced this in 48hrs. With humility, we will seek guidance from specialists on the usefulness of the device. Whatever the outcome, they have shown India fights back… pic.twitter.com/LrVXm4Acku

“Following the tweets and efforts put in by Mahindra Group, our company also got inspired to fire up our R&D brains to come out with a product to fight Covid-19,” he added.

Besides Mekins, four professors of the University of Hyderabad also worked on the project. As of now, the trolley is deployed at the Employees’ State Insurance in Hyderabad while other state departments are also looking to procure the machine.

How Covid-19 Is Changing The Game For Robotics

Just like in the case of drones and unmanned vehicles, robotics is having its moment under the spotlight during the Covid-19 pandemic. While the deployment of robots and humanoids has been seen in the past, these have mostly been in situations where robots have proved to be more efficient than humans — such as in industrial units, heavy machinery operation and more.

However, the Covid-19 pandemic has shown that robots have a role to play in the healthcare ecosystem as well. It remains to be seen how many of these solutions will survive to post the lockdown, but chances are that many hospitals might turn to robots for sanitation and patient interaction, considering that India is already burdened by the lack of doctors and nurses. Robots could actually allow these human components of the healthcare system to address deeper challenges and that’s always a great thing.