The Crusaders: How Dineout, HungerBox, Zomato & Others Are Delivering Life-Saving Meals To Daily Wagers

The Crusaders: How Dineout, HungerBox, Zomato & Others Are Delivering Life-Saving Meals To Daily Wagers Around 42.3% of the labourers stranded in India’s big cities are left with no food or income due to the lockdown

When India’s massive lockdown was announced on the night of March 24, Prime Minister Narendra Modi sought to comfort the fears and panic of millions who have been impacted by the restrictions.

The decision impacted many citizens but the worst affected ones were the daily wage labourers who had nowhere to go. With empty wallets and home stock running low on essentials, these workers, often referred to as transient labour or gig employees, were the most vulnerable section of the society among those with an income.

According to a 2017 report by the World Economic Forum, India has around 139 Mn internal migrants. The major destination states of these migrants are Delhi, Maharashtra, Tamil Nadu, Gujarat, Andhra Pradesh and Kerala.

Some of them, fortunately, were able to reach their hometowns, but many were stranded in cities without any job. Some of them even committed suicide as they had no money to buy food for their families that hadn’t eaten for days.

A survey by Jan Sahas found that monthly groceries was the foremost demand of around 80.3% such stranded labourers while 59.6% sought financial assistance from the government. The survey also revealed that around 42.3% of the labourers are left with no ration. Around 39.4% had ration for about two weeks. However, with no money left and no hope of getting any work soon, many of them are living in fear that they will run out of food in the near future.

Speaking to Inc42, founder and CEO of Bengaluru-based foodtech startup HungerBox Sandipan Mitra said he was majorly concerned about fatalities due to hunger rather than the virus. Like Mitra, other founders of Indian startups also realised the sad reality of the lockdown and decided to step up to challenge even though the lockdown had severely impacted their businesses.

From ending the hunger of thousands of Indians to feeding those who have no income due to the lockdown, Indian foodtech startups are standing tall when it counts. In the wake of the lockdown, restaurant tech platform Dineout launched ‘Project Thali’ to feed the hungry stranded in cities without income.

Dineout cofounder Ankit Mehrotra told Inc42 that the startup had launched this initiative in 20 Indian cities to serve the poor and vulnerable communities who may not be able to get their daily wages and food ration. Dineout leveraged its restaurant network. Mehrotra said that Dineout has a presence in more than 20 cities in the country and the restaurants there are fulfilling the hunger of many.

Explaining the reason behind launching Project Thali, Mehrotra said, “We started getting calls from our restaurant-partners that their workers are not able to get groceries as they are stuck at one place due to the lockdown.”

Meanwhile, the restaurants, which wanted to help their workers, were not able to extend support as many lived far from restaurants. So Dineout requested nearby restaurants to deliver food to the workers anywhere in the city.

Mehrotra said Dineout started this by launching a helpline number. He clearly remembers that most of the calls in the initial days came from restaurant workers only. The startup has set up a hotline and a call centre to connect with people easily. Started three weeks, the project is now feeding around 1.5 Lakh Indians on a daily basis.

For the initiative, Dineout is urging people to donate funds or ration. So far Dineout has received over 1 Lakh Kg of food through this initiative. “We are requesting people to come forwards and join us. They can do so by cooking at out restaurant-partners or by delivering food.”

Over 1,300 volunteers are currently working with Dineout to help workers get their daily meals in more than 5,500 postal codes across the country. Restaurants like Biryani By Kilo, Taco Bell, and Chaayos are helping Dineout in distributing meals along with non-profit organisations.

Lakhs Of Meals Every Day

Bengaluru-based B2B foodtech startup HungerBox is also playing a major role in a similar food distribution initiative by the KVN Foundation. Called FeedMyCity, the initiative has other partners such as BigBasket promoter and Portea Medical founder Ganesh Krishnan besides HungerBox, but the startup is using its kitchens to prepare meals while other employees are helping with delivery and supply chain.

The startup has consulted with a dietician to come up with a low-cost high carbohydrate meal. Mitra said that for many, it is the only meal in the day, so it is important to ensure that it is a balanced meal. A single meal costs HungerBox INR 22.

The FeedMyCity initiative is currently in five major Indian cities under the name of FeedMyBengalauru, FeedMyMumbai, FeedMyNoida, FeedMyHyderabad, and FeedMyChennai. HungerBox is supplying food to around 120 centres from its FSSAI-approved kitchen and around 100K food orders are delivered daily.

Initially, the startup was leveraging its own man force to reach out to the workers. But soon the government offered them more people to help the needy. Even police officials in many places also joined the noble cause in many places.

In India, Swiggy and Zomato are the major food delivery startups which have been fulfilling the hunger of the countrymen for many years. Leveraging their massive fleets, both Swiggy and Zomato have also joined the noble cause to feed millions of workers stranded in the cities.

Zomato Feeding India is using the funds to distribute ration kits to over four lakh families across 38 cities. 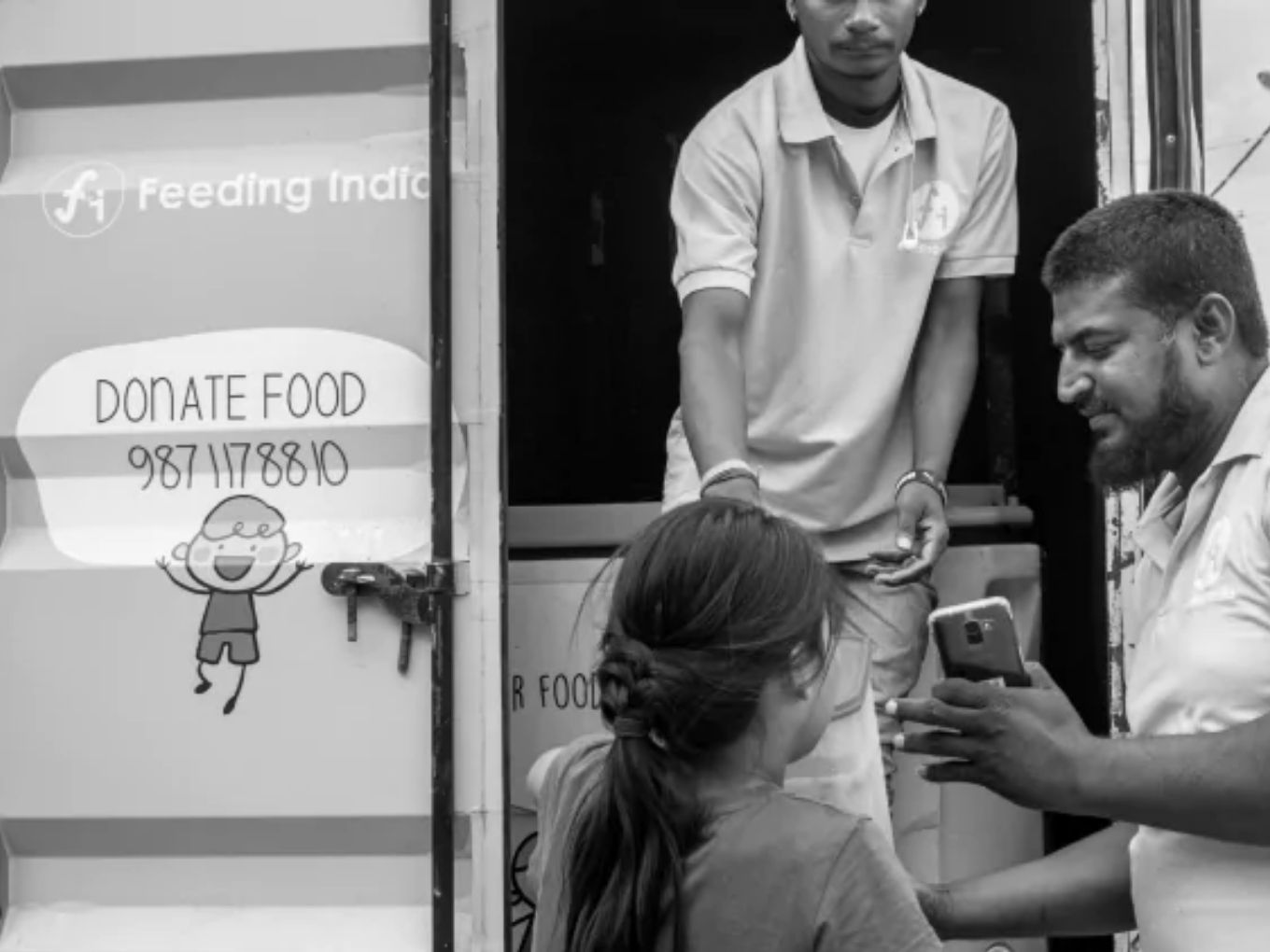 For this initiative, Zomato has partnered with Tupperware, Realme, Zerodha, and Rosy Blue. Non-profit arms of Dream11, Max Hospitals, and HDFC founder Hasmukhbhai Parekh are also a part of programme. Zomato is leveraging its expertise in consumer technology and wide consumer reach to spread the word. This is helping the initiative to collect more funds and getting more volunteers on board.

Besides companies, it has also partnered with 144 NGOs and district administration to identify families in need of meals and other essentials and distribute kits. The Gurugram-based food delivery unicorn claimed that 100% of the donations received are used in procuring and distributing of the ration kits which it buys from supply partners including Grofers, Big Bazaar, Walmart, METRO Cash and Carry and Hyperpure by Zomato, amongst others.

Mendiratta added that execution partners are required to furnish lists of beneficiaries and photographs of the distribution which is then verified by the team to ensure that kits are reaching the right people. “These processes will be independently audited by process validation partner Grant Thronton LLP,” he added. Zomato will also be publishing a transparency report by the end of the campaign for every donor to see where their money went.

On the other hand, Zomato’s rival, Bengaluru-based Swiggy is running ‘Hope, Not Hunger’ initiative in partnership with crowdfunding platform Milaap. As part of this initiative, Swiggy is aiming to distribute around five lakh meals across India, daily.

Swiggy is also leveraging its delivery-partner and restaurant network to support several government bodies, NGOs, and other institutes in their efforts to distribute meals in relief camps. It is also preparing meals, which weighs around 400 gram each, comprising rice, dal, and vegetables.

So far, Swiggy has raised around INR 8.4 Cr for the initiative. Till April 17, Swiggy has facilitated the delivery of around 24 lakh meals in around 30 cities. NGOs such as Global Concerns India, Pratham, HelpAge India, and Yuva are working together closely Swiggy’s kitchen partners such as Elior, Compass Kitchen, Lite Bite, Smart Q, among others to cook and distribute food efficiently.

Logistics startups are the force which are driving India forward these days. Amid the pandemic and lockdown, logistics players are in the driver’s seat when it comes to delivering meals to the hungry. For instance, Ecom Express is aiming to facilitate daily meals to around 10K daily wage earners.

Cofounder and director K Satyanarayana said that Ecom Express has partnered with G2Chambers and a few non-profits for the initiative. In this arrangement, Ecom Express is providing free logistics support for food and ration distribution.

Satyanarayana said most of the food is collected from ISKCON temple and various restaurants in Delhi NCR. Ecom Express is also delivering free meal and ration to daily wagers in Surat and Ahmedabad while dry ration has delivered to more than 100 families in remote areas of Assam.

Meanwhile, hyperlocal delivery startup Pidge has partnered with Me:ette Delhi, Blue Tokai Coffee, Suchali’s Artisan Bakehouse to deliver food packets to stranded labourers in Delhi. Pidge founder Ratnesh Verma said that the tie-up is able to help around 500 people daily in the South Delhi region. It is also getting the support of local authorities for the initiative.