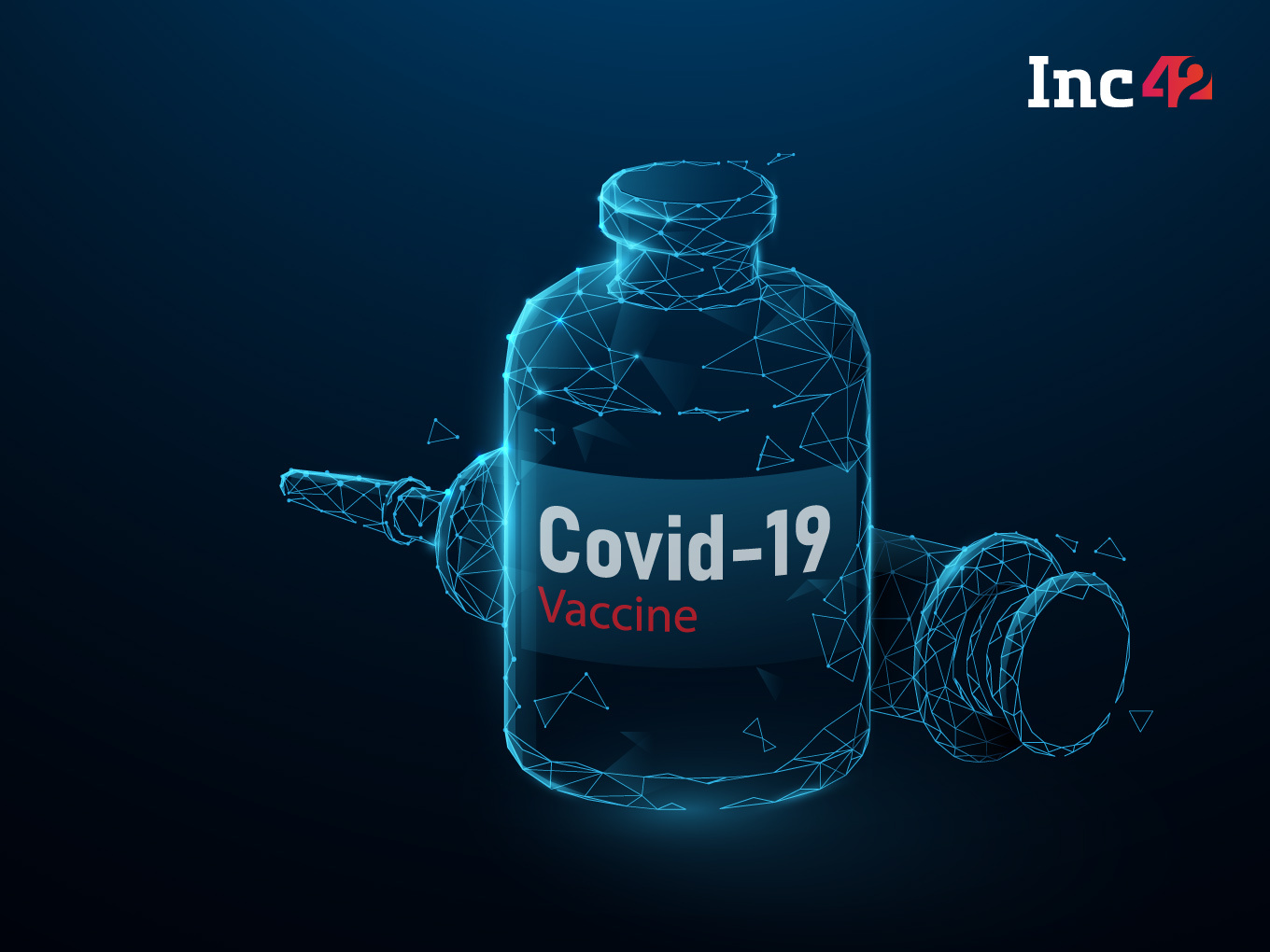 Even though the announcement has been made, there is a huge gap between supply and demand which will create only chaos, say some founders

As the 3rd phase of vaccination officially starts today, the question is will it really begin for the millions awaiting vaccination in India?

Opening the third phase of vaccination drive for 18 to 44-year-olds, prime minister Narendra Modi on April 20, said, “Now, half of the vaccines produced in India will be available directly to the states and hospitals. Meanwhile, the Central Government’s vaccination programme for the poor, the elderly and persons above the age of 45 years will continue at the same pace as before. ”

Besides the addition of the new age group 18-44 years, the central government has also liberalised the vaccination drive to allow states, private hospitals, and healthtech startups to procure the doses directly from manufacturers.

Healthtech or non-healthtech, startups have already been fighting against Covid at multiple fronts be it gathering funds, supporting aid efforts for testing or even home isolation and developing or procuring ventilators and oxygen, software/platform development.

In the case of vaccination drive, while many of the startups have already enabled vaccination booking on their platform, this participation could have been much more, had there been a well thought centralised vaccination policy and implementation, healthtech startups feel.

Even in the current National Vaccination Strategy too — there are a plethora of issues that have made it almost impossible for the private sector to procure vaccines from manufacturers in order to participate in the vaccination drive.

Bengaluru-based Portea Medical cofounder Vaibhav Tewari told Inc42, that Portea has already planned to launch a vaccination drive in the first week of May, depending upon the supply chain. Depending upon the availability, Portea plans to launch in the 15-16 cities across India. This will also enable one to get vaccinated at home.

Mumbai-based healthtech unicorn PharmEasy has announced plans to vaccinate over 3 Cr families via 5,000 partner centres, pan-India over the next few quarters. The company will leverage its presence across India, with over 80,000 partner retailers, 5,000 doctors and pharma supply chain facilities to enable last-mile delivery of cold chain products. The company has come up with a Google docs form for vaccine registration.

“We have been overwhelmed with the response so far. Over 50 lakh individuals and 750 organisations have already made a soft commitment to vaccinate themselves and their respective families in the last 24 hours alone, with many more joining us each minute,” said the company in a statement.

Startups such as Gurugram-based 1mg and Bengaluru-based mFine have so far enabled vaccine registrations for people aged over 45 years. The vaccination charge on these platforms stands at INR 250. However, the platforms are merely accepting the registrations and charges are being levied by the vaccine centres. Both will reportedly start accepting registrations for 18 year-olds too, once there will be clarity on the supply side.

In sync with the government’s efforts to immunise citizens, 15 Lakh+ PayNearby retail touch points across 17,500+ PIN codes will be leveraged to create community awareness around the program and assist citizens to overcome tech and language barriers, and seamlessly register themselves on the CoWIN app, said the company.

This local trust will be channelised to create social awareness around the importance of immunization and also assist citizens limited by tech ability and language barriers to seamlessly register for the vaccination program.

While the Indian government has flagged off the third phase of vaccination drive, there is very little chance that anyone under the age of 45 will get a vaccine from May 1 onwards, due to the dearth of vaccines. Most of the vaccination centres in Mumbai and Delhi have been shut down for the past few days citing no supply of the vaccine. This has already created a furor at multiple centres with thousands of people roaming around the centres seeking vaccines.

A former secretary at the Ministry of Finance told Inc42, the entire hullabaloo could have been avoided had the announcement been made in sync with the supply. For instance, the Phase 3 vaccination programme could have been announced to launch from May 15 onwards after ensuring that all the states have received enough vaccine doses to disburse. Similarly, the government badly failed in addressing the shortage of raw materials in due time which heavily impacted the vaccine production. To add further, the export of vaccines was permitted without giving much due attention to the rising curve of Covid at home. As a result, we have now agreed to import some of the exported vaccines at much higher price.

On the vaccination front, private hospitals and startups continue to wait for clear guidelines. Girdhar J. Gyani, director general, Association of Healthcare Providers (India) said, “As on date, the private sector has no clarity about delivery of vaccines for the 18+ population, who will be looking forward to vaccination from 1 May. We have suggested that as there is very little time left to have dialogue with vaccine manufacturers, we should continue to get supply through states as presently being done.”

Escalating the confusion further, union health ministry secretary Rajesh Bhushan in a letter dated April 23 told all state chief secretaries that unutilised vaccine stock balance as on April 30 should be returned to the cold chain point from where they were issued. The states accordingly have already issued advisories to the hospitals in this regard. However, a senior official from Apollo Hospitals Group, which will roll out vaccination for 18+ citizens, said that such a notification is a complete abuse of the supply chain as well as a waste of time. Instead the government could have come up with certain clarification pertaining to the use of remaining doses. 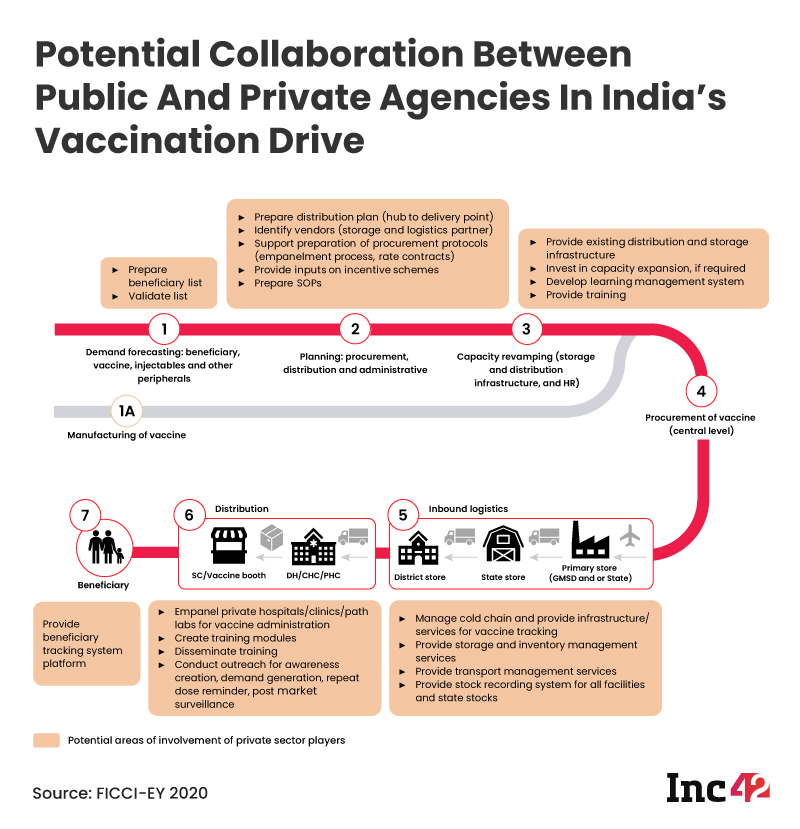 Another healthtech startup founder who is actively engaged with government officials over vaccination, told us on the condition of anonymity, that even though the government has green signalled the import of other vaccines such as Moderna, Pfizer, and others, there are multiple issues with the import which have not been completely resolved. While Sputnik V by Dr Reddy Lab will take another month, making the import of these vaccines tough.

Barring selected centres of Apollo and Max, most of the private centres are expected to launch the third phase of vaccination drive only after May 15. In such a case even if the announcement has been made, there is a huge gap between supply and demand which will create only chaos, said a healthtech startup founder.