Startup Watchlist: Top Indian Edtech Startups To Look Out For In 2019

There are currently 3500 edtech startups in India

Technologies like AR, VR, blockchain and STEM Labs are further boosting this sector

A few startups which make list are Smartivity, Unacademy, Upgrad among others

This article is part of Inc42’s Startup Watchlist, an annual series in which we list the top startups to watch out for in 2019 from industries such as agritech, AI, logistics, healthtech, edtech and more. Explore all the stories from the ‘Startup Watchlist’ series here.

In India, there are more than 1.6 Mn primary and secondary schools, 37,204 colleges and more than 789 universities. At the same time, there are 3,500 edtech startups (Inc42 DataLabs estimate). The former clearly indicates that traditional brick and mortar medium of education still dominates the Indian education system. However, the small number of edtech startups have brought forward a technological revolution which has placed the smartphones and tablets in hands of users as young as 3-4 years.

Technologies like AR, VR, blockchain and STEM (Science Technology Engineering Maths) Labs have been able to convince teachers and parents, that products offered by edtech startups in India can be a part of overall learning mechanism of a student.

In Tier 1 cities of India, one can even find reputed schools integrating the smart learning into the regular curriculum for the overall development of the students from various digital education companies in India. At the same time, there are edtech SaaS startups which are trying to ease off the hassles around admission in colleges globally as well as the enrollment process of the competitive exams. Also, elearning companies are now offering skill learning courses which have become an all-time hit among working professionals.

With the Indian edtech segment expected to be a $1.96 Bn market by 2021, the investors have not been able to stay away for long from the growing opportunity. According to Inc42 DataLabs, in 2014 edtech startups raised $32.64 Mn funding across 32 deals. According to the Indian Tech Startup Funding Report 2018 by Inc42, edtech startups received close to $700 Mn in funding across 56 deals.

Although the sector has only a few high profile successes to date. BYJU’S massive $500 Mn funding round in 2018 and Toppr’s $35 Mn funding were the only big-ticket funding in this segment last year. But along with them, there are many others who are doing quite an impressive job. Inc42 has curated a list of seven such edtech startups. Here it goes!

Indian Edtech Startups To Look Out For In 2019 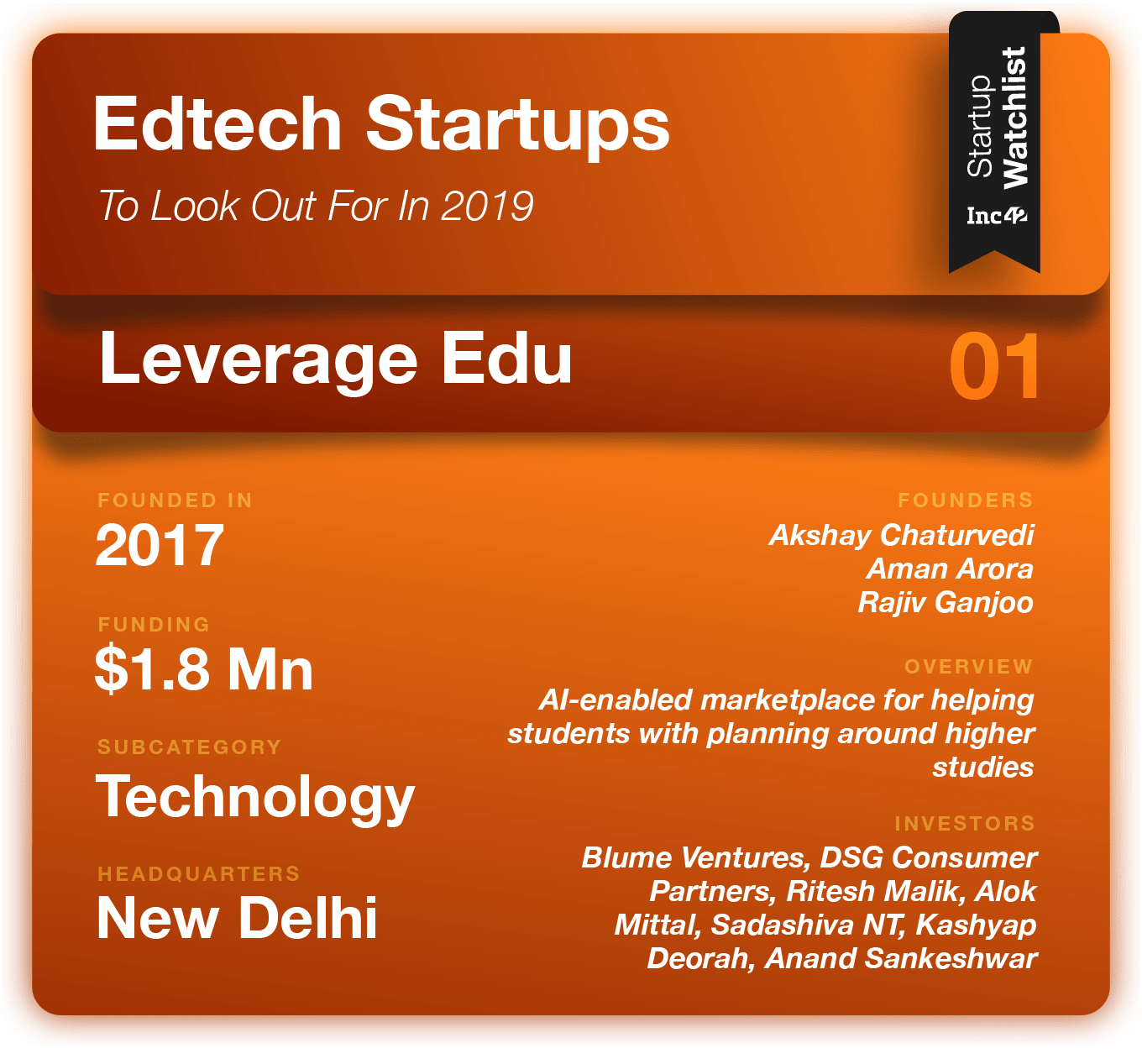 Leverage Edu, which started off as a college admission platform has grown to a full stack marketplace in the last one year. It uses an AI tool to help students in their careers through mentorship products, end-to-end college admissions guidance, programmes to help get first-job ready, as well as one-to-one virtual career advisory for multiple career streams.

It also helps students with exclusive scholarships, educational loans, help on housing, forex/VISA, and more, through multiple global partnerships. This continues to be its largest category, and its focus in the coming years, as shared by the company with Inc42 recently.

It currently boasts of more than 750 mentors from Ivy League universities among others along with experience centres such as Apple, Goldman Sachs etc among others. It is currently serving 12x more students per month as compared to last year.

As shared by the cofounder Akshay Chaturvedi with Inc42, “We are in the middle of executing an aspirational product roadmap, which is the most exciting thing for Leverage Edu this coming year. Alongside, we continue to scale, bring onboard great talent aggressively, invest in continuously bettering our experience, and doing more of what we are good at!” 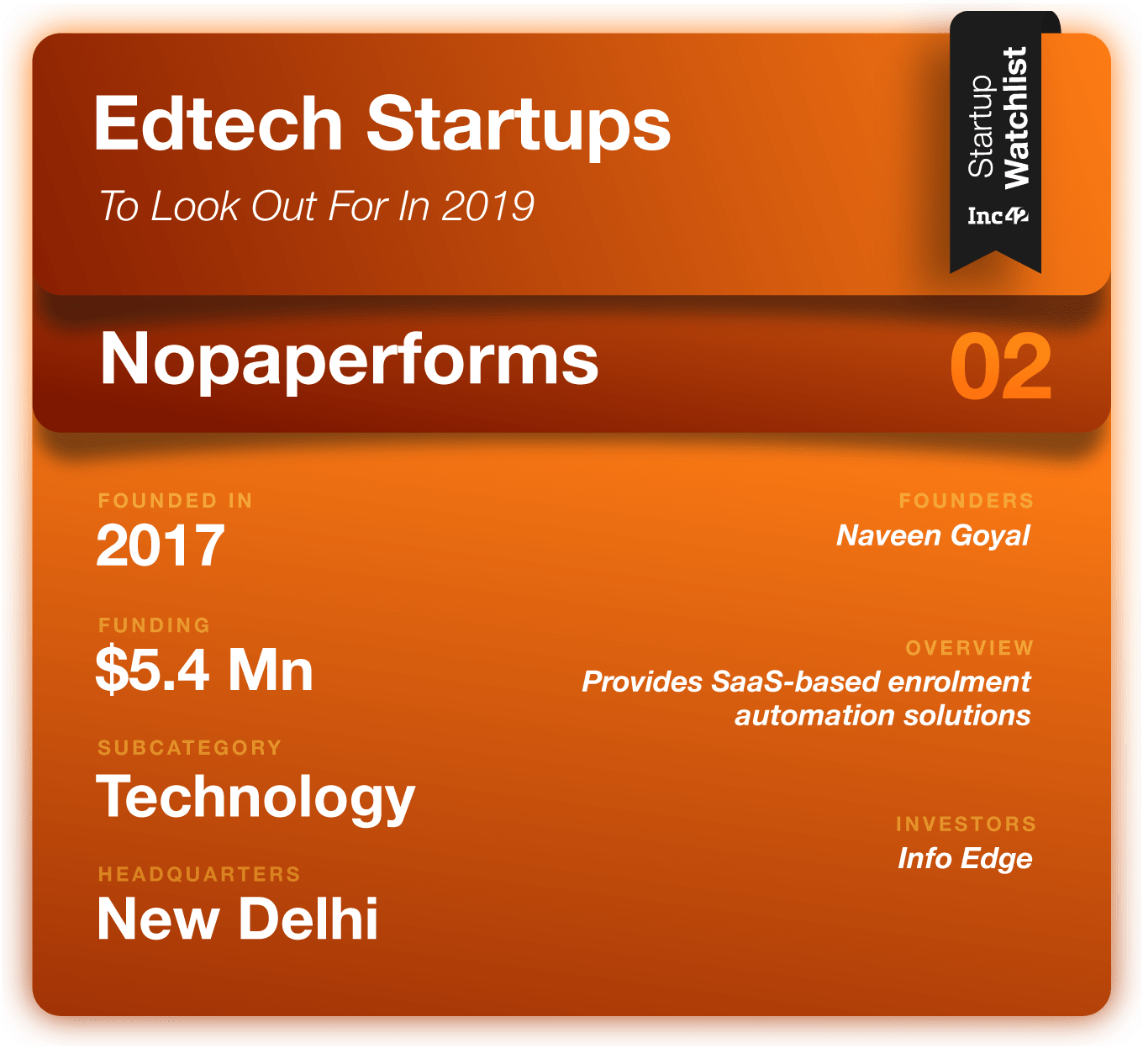 NoPaperForms is a Software-As-A-Service (SAAS) based enrolment automation solution which aims to fundamentally transform the admission process in the educational institutions in India and abroad.

As of now, the company has partnered with more than 192 institutions and claims to have handled 350K+ queries with 1.2 Mn+ applications received. Also, the company’s valuation grew by around 500% in a year’s time to INR 100 Cr ($13.9 Mn) when it raised its Series B funding in December 2018 from the existing investor – Info Edge India Ltd.

The company posted INR 3.13 Cr ($438K) in FY18 and now is poised to post revenue growth of 4X with an aim to onboard 400 institutions by the end of the session. It is currently working on bringing disruption in the way Students apply & institutions verify credentials.

“One of the strategies is to deploy Application kiosk infrastructure in Institutions, banks & post offices to bring the next level of masses online. We strive to process 30-35 Mn applications by 2020,” said Suraj Sapra, the chief strategy officer at NoPaperForms. 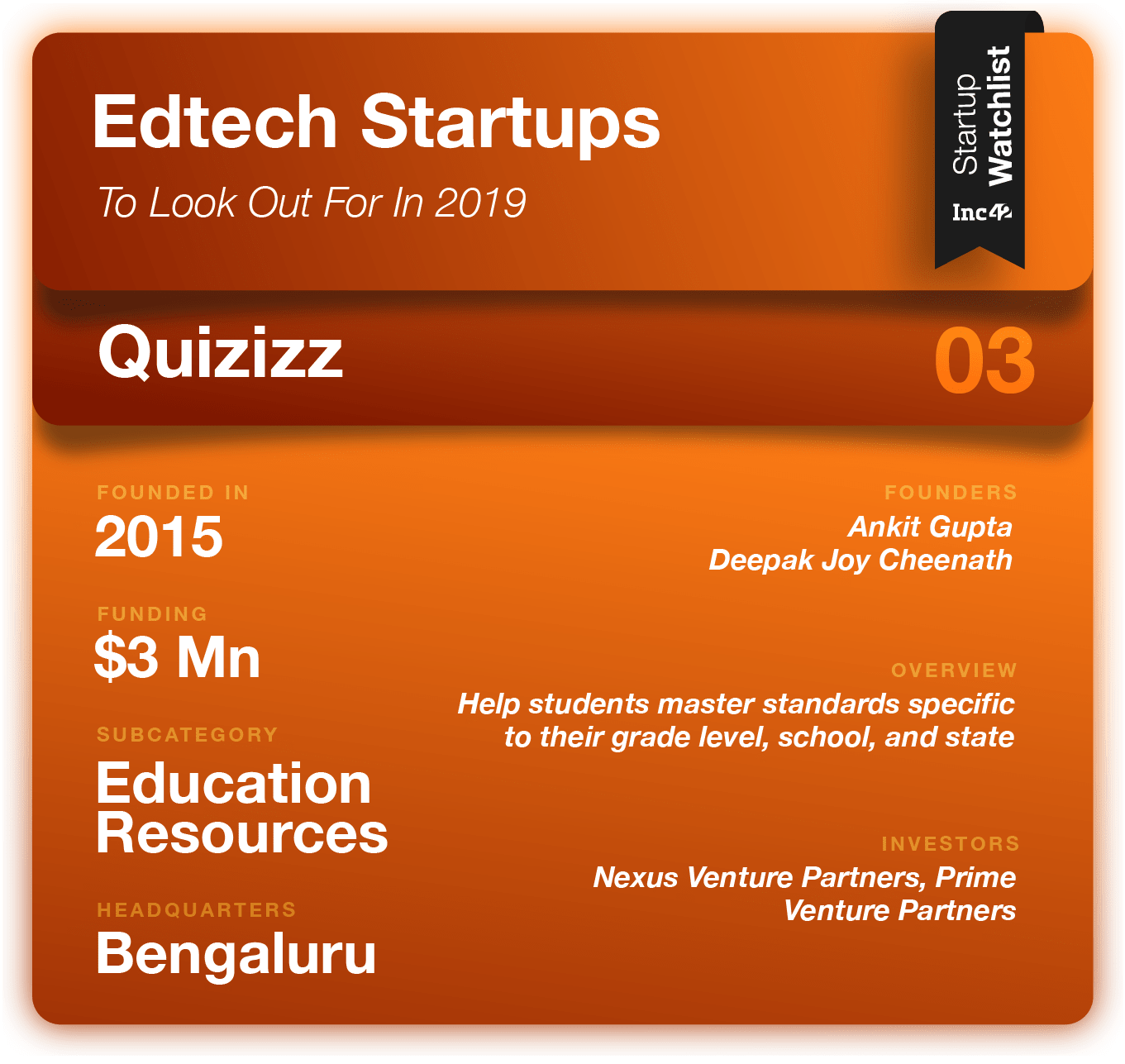 Spread across their California and Bangalore offices, Quizizz combines game-design elements and helps teachers turn homework and tests into self-paced games as well as give instant feedback to help students learn for mastery. Teachers can use their own content or choose from millions of educator-created quizzes. Students can engage from any device.

Different Quizizz game modes let students play as a group or complete assignments at home. Features like points, customisable memes, and an optional leaderboard personalise the experience for each class.

“Our mission is to motivate every learner. When we hear that a student initially struggled on a math assignment but then replayed it six or seven times because he/she wanted to improve, we know we’re on the right track”, said Ankit Gupta in an earlier media statement.

As of August 2018, the company has hit the 10 Mn user mark and the solution was well adopted in US-based schools. 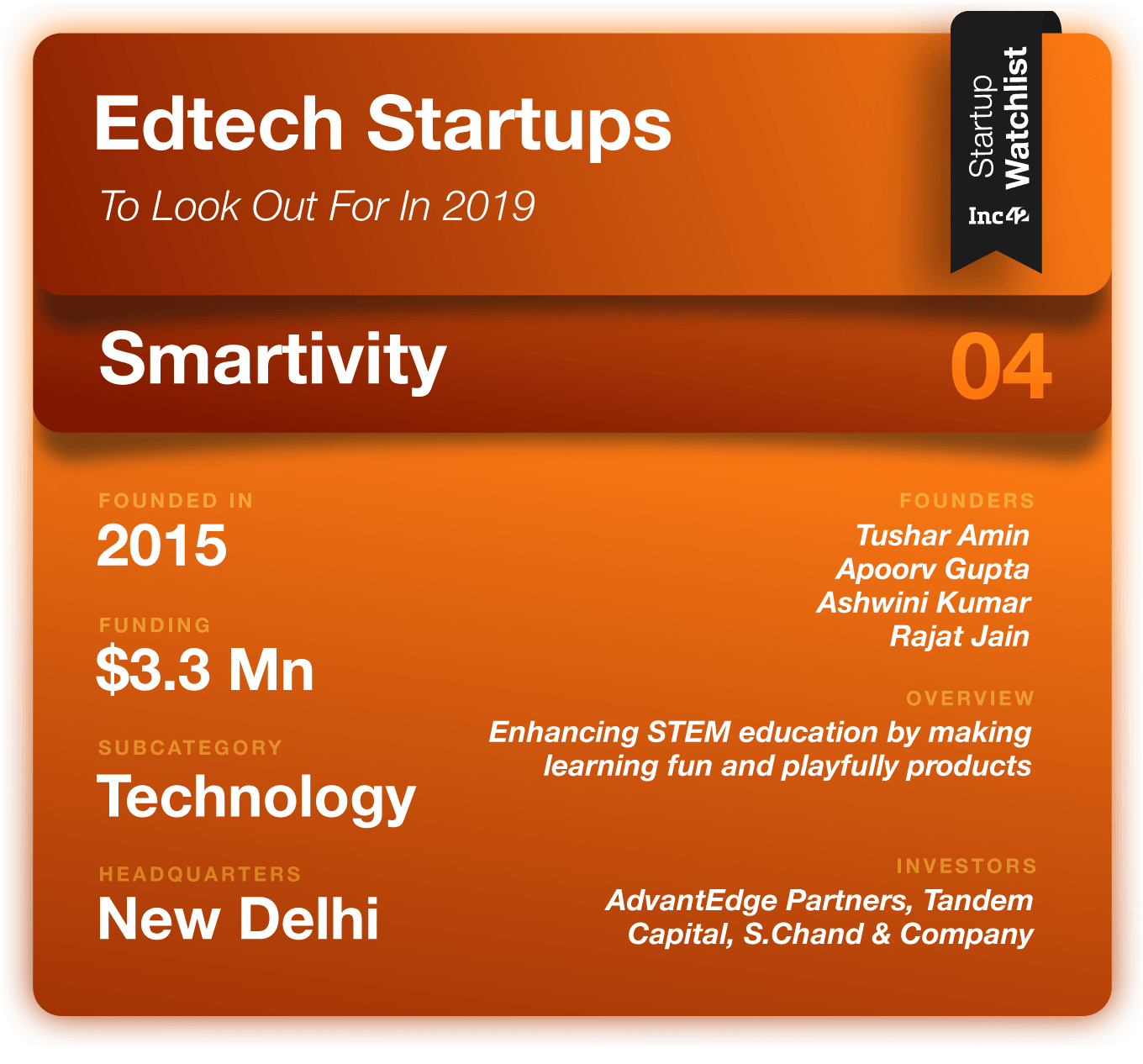 It caters to the education requirements of children aged between 3 to 14-year old and introduce them to core STEM fundamentals through plug and play. For instance, with its virtual reality product VRX, students studying in class 9 and 10 will be able to access virtual reality experiences designed to understand complex concepts in Physics, Chemistry and Biology.

Spell-English, Link Dunk Vibrating Basketball and Slippery Slopes Friction Puzzle, Magico are the other STEM products launched by the company. As of June 2018, the company was working around launching 24 new STEM educational Do-It-Yourself toys by next month.

Last year, the company entered a number of international markets including China, Australia retail, Russia, MENA and South East Asia, in addition to its existing USA, Canada and European markets. The revenues for FY2018-19 saw a 145% growth over the previous year and launched over 16 new product designs over the past year, as claimed by the company.

In 2019, it will be further expanding to South Korea, Japan, Latin America, Western Europe and China. It is looking to launch three new lines of products in India in near future. With a growing international presence, the team is also aiming at increasing its revenue over 3x in 2019-20. 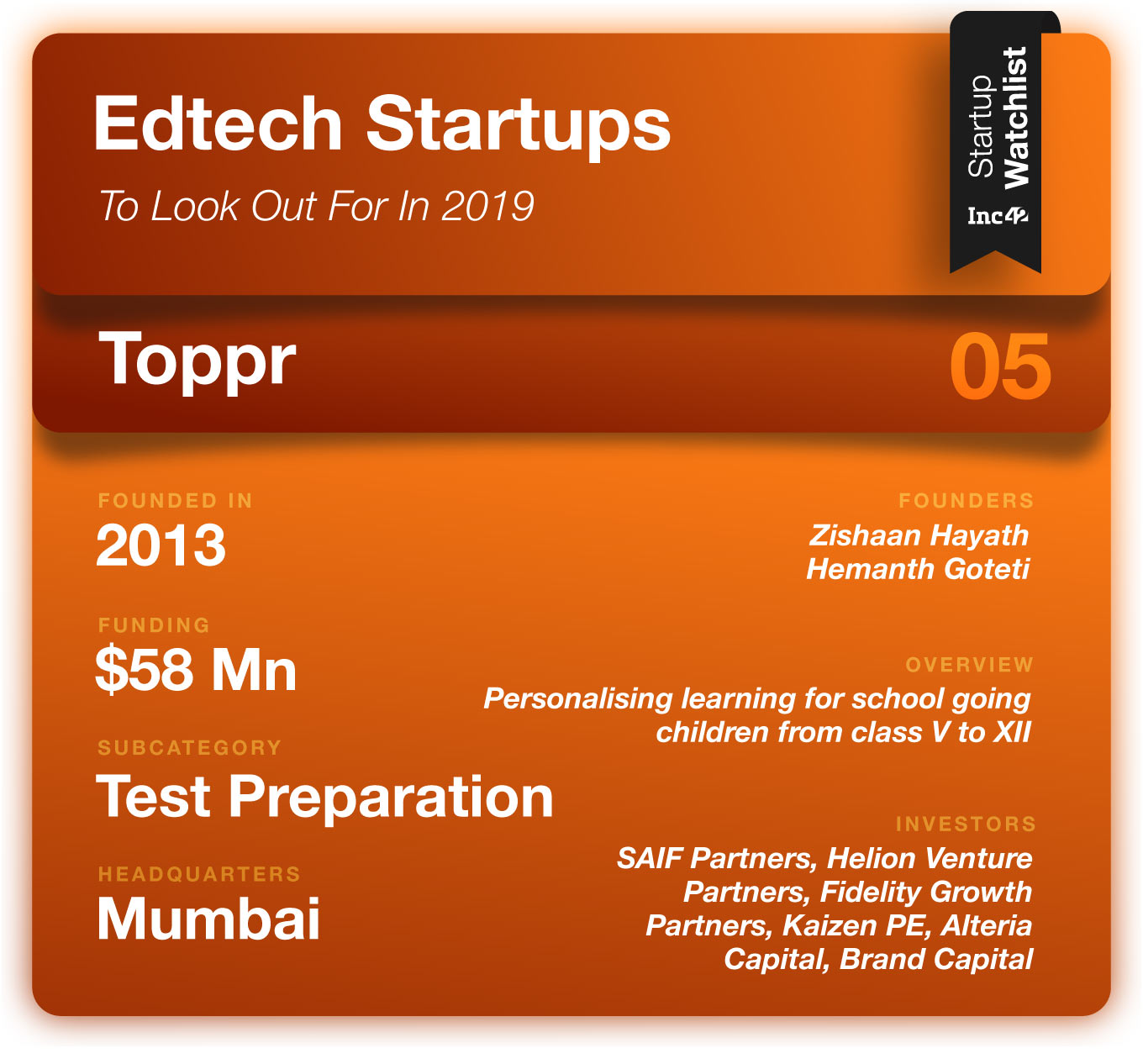 Further to recent Series C funding of $35 Mn in December 2018,  Toppr is looking to rapidly scaling up, expanding the geographical footprint and accelerating user acquisition. The company offers adaptive learning courses for classes V to XII and also for competitive exams such as JEE.

Being one of the first movers in the Indian edtech segment, Toppr now boasts of metrics such as close to 4 Mn doubts solved, 3 Mn tests taken, and over 300 Mn questions practised.

It claims to have grown its revenue 2x in the last two months. The company gets around 40% of its business from senior classes, and 60% from the junior and middle classes. It projects its revenue to be more than $500 Mn by 2021. 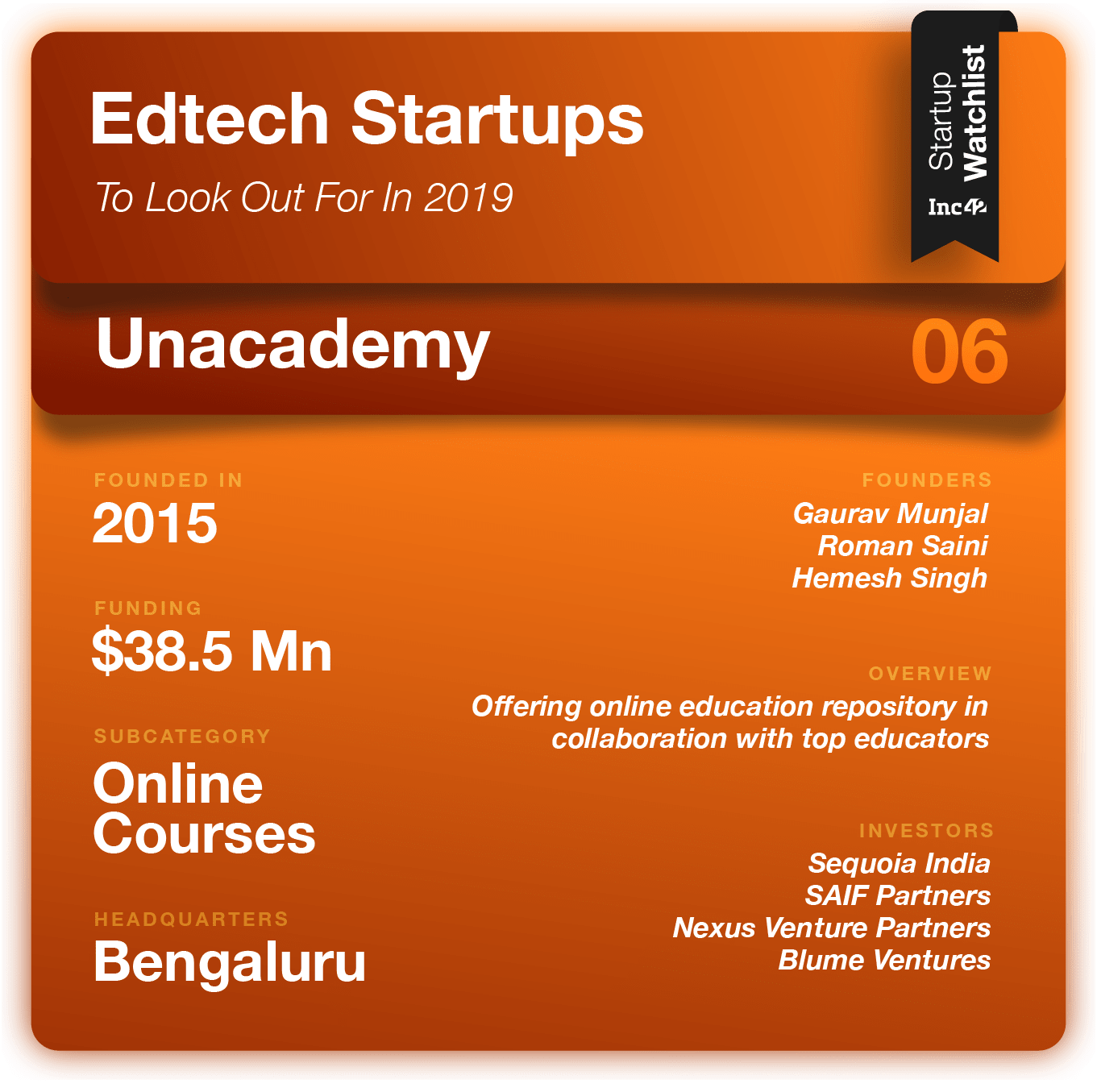 Unacademy was initially launched as a YouTube Channel in 2010 by Gaurav Munjal. In 2015, it was officially registered as an educational technology platform when cofounders Roman Saini and Hemesh Singh came onboard. The subscriber base of the YouTube channel has since then grown to over 2 Mn, as of August 2018.

As an online learning platform, it aims to empower educators to create courses on various subjects. It hosts more than two lakh lessons in more than 10 Indian languages. Some of India’s top-educators such as Kiran Bedi, India’s first woman IPS officer and now the governor of Pondicherry curate content for the Unacademy platform.

With a growing network of more than 10,000 registered educators and 3 Mn learners, Unacademy is further accelerating its product and technology as well as scaling to other categories including personality development, new languages and job interviews. 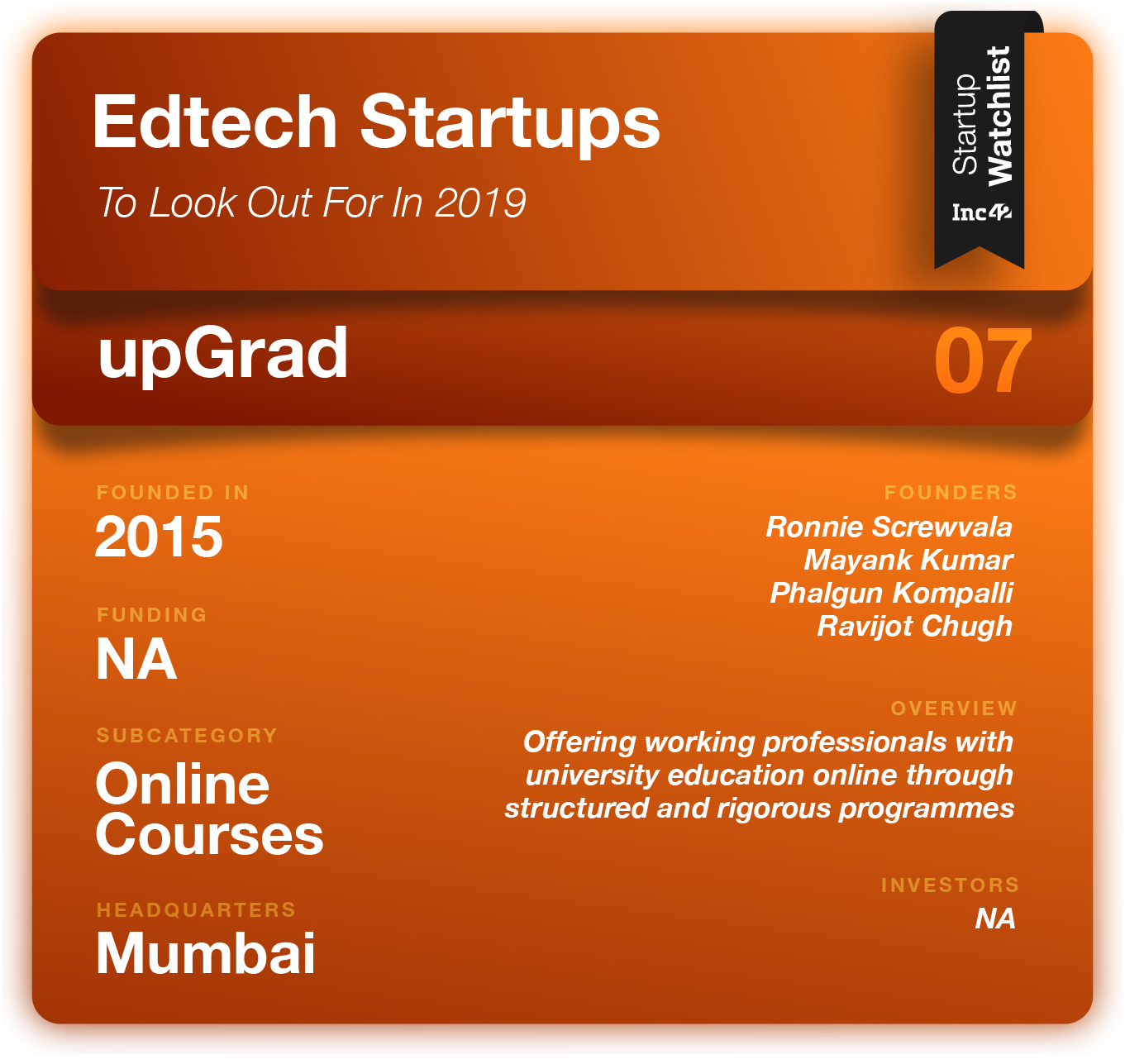 upGrad aims to empower working professionals and individuals to reach their full professional potential by providing them with university education online through structured and rigorous programs and facilities.

It targets working professionals looking to get back to learning in order to further progress in their careers with industry-ready programs, without the need of quitting their jobs. upGrad has assembled a team with extensive experience in education, media and technology products, for this purpose.

“We decided to price ourselves in comparison to offline education. For a program between 6 months to 1 year, our average ticket size is in the range of INR 1 Lakh to INR 3 Lakh. So, holding out to this price point in the Indian market has been one of our strongest proposition and this worked because we offered the right value,” said Mayank Kumar, cofounder at upGrad in a recent conversation with Inc42.

In October 2018, it also acquired Acadview Software Pvt Ltd, an online job skilling platform for undergraduates. With this acquisition, the online higher education company is venturing into bridging the employability gap for a market which has enrolments of 35+ Mn students in colleges, institutions, across 50K+ higher education institutes and 800+ universities.

While these are the Indian edtech startups to watch out for in 2019, stay tuned for the next edition of Inc42’s Startup Watchlist, in which we will be featuring Indian logistics startups that will make it big in 2019. Click here for more stories!