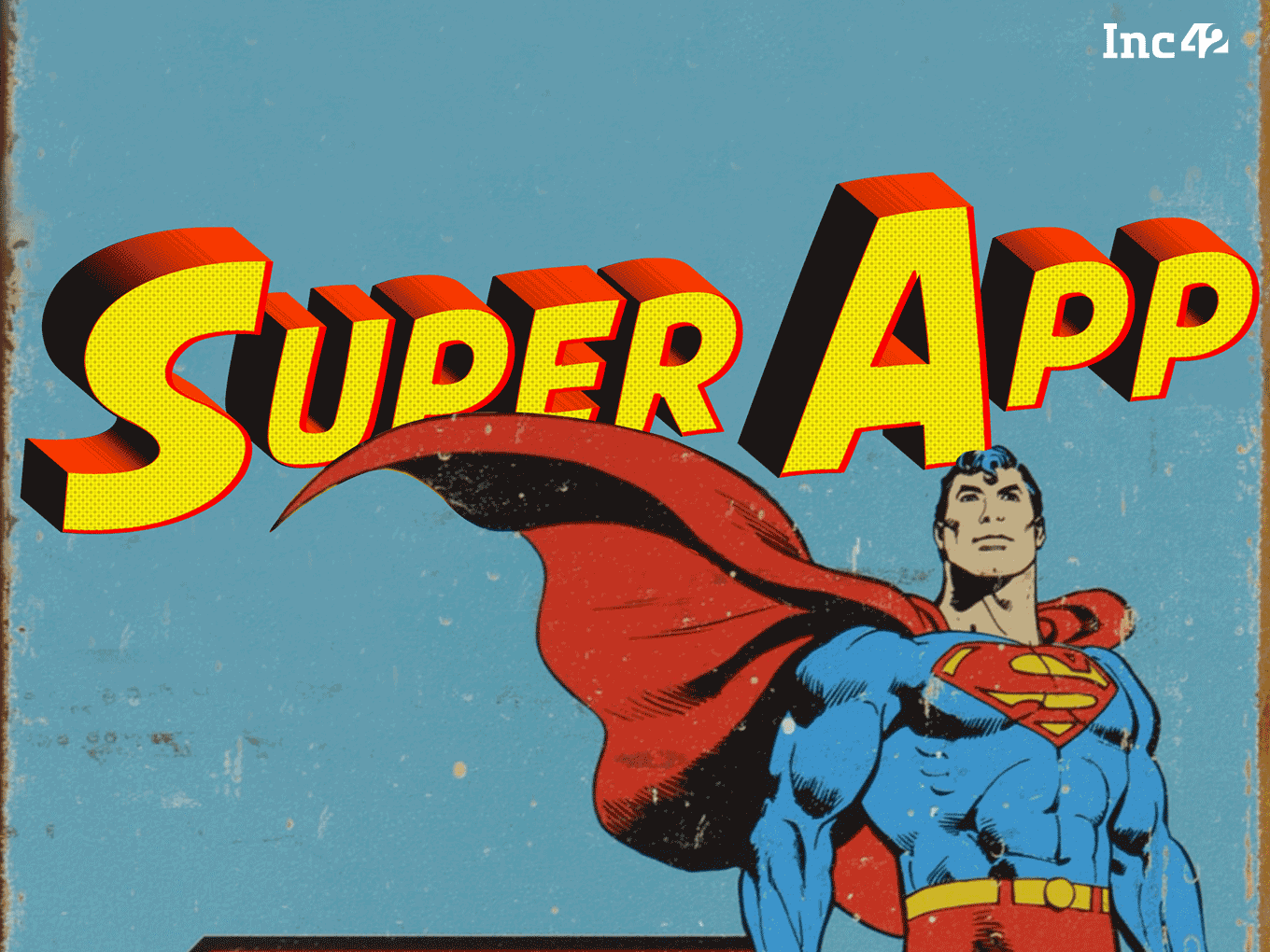 India's consumer startups are looking to make an app that fulfils needs like ecommerce, cab hailing and food delivery

Grab and GoJek are other famous super apps

Since early 2016, JustDial has been running an advertisement which features brand ambassador Amitabh Bachchan at an airport where repetitive notifications of a fellow flyer’s phone disturb the superstar’s reverie. Bachchan takes the guy’s phone, deletes all his apps (bearing an uncanny resemblance to some of India’s most popular apps) downloads JustDial, and reassures the panicked flyer that the “super app” will be the only one he needs.

From aggregating local business listings on audio calls to an app where one can buy movie and flight tickets, order food, watch TV shows, payments — JustDial’s big-budget foray into super app territory is one that many Indian startups are attempting to do as well. The growing list has one goal: make an app that makes people wonder how they ever lived without it.

“Smartphones are reaching the hands of everyone these days, including the illiterate and the technologically challenged. For them, having an umbrella of apps that are simple to navigate is naturally a godsend. So, theoretically, super apps are the perfect solution for the Indian market,” Vinay Nair, founder of early-stage VC firm Nair Ventures, told Inc42.

Behind The Great Firewall Of China

The origin-story of the super app began in China, where a government firewall on platforms like Facebook, Youtube, Twitter etc. led to the creation of an app ecosystem similar to their western counterparts. For Google there’s Baidu. For YouTube, Youku. For Twitter, Sina Weibo. And the list goes on. These apps were only available in China, and Silicon Valley app developers dismissed them as state-run ‘puppet apps’ that let the Chinese government keep tabs on its citizens.

The path that these apps took about a decade back, however, started to turn heads world over. The once derided Chinese apps were touching people’s lives in ways Silicon Valley gurus had only dreamed off. They were starting to shed the moniker of ‘copycat app’. But most importantly, one of them was becoming the world’s first Super App.

WeChat, or Weixin in Mandarin, was launched as a messenger app in 2011 by Chinese internet giant Tencent, and since then it has become one of the world’s largest standalone apps. With 800 Mn active monthly users, WeChat far outstrips closest rivals WhatsApp and Facebook put together. Be it to chat, scroll through social media, order takeout, book flights and movie tickets, get a cab or even pay traffic fines(!), WeChat isn’t just any messenger app anymore. In modern-day China it’s a necessary tool to survive.

Users check the WeChat app at least 10 times a day on an average, and more than 80% of users purchase products online. That kind of stickiness at such scale is unprecedented. But WeChat was not alone in this pursuit of complete dominance.

Further east, in Indonesia, Grab and Gojek which started in 2010-11 as ride-hailing apps, now cover everything from logistics to groceries. They even provide loans, virtual credit cards and insurance. The two are currently among the highest valued unicorn startups in Asia.

So naturally the question arises: Where are the Indian super apps?

Industry estimates show that the most active 50 Mn internet users in India take cabs twice a day, order food thrice a week, order groceries once a week, shop online once every two weeks, book a flight or movie ticket once in two months and pay for most of this digitally.

All these activities are on apps, which take precious space on smartphones. According to a blog post by Tapzo (one of India’s earlier super apps) founder Ankur Singla in 2017, almost all apps (except for the top 5-8 apps) see 60-80% uninstall rate within 90 days of users installing the app.

And the main reason for uninstalling an app is the lack of space, a problem that a super app can potentially solve. Overall, India has over half a billion internet users, most of whom are experiencing the internet for the first time through a smartphone, which is a prerequisite for any app.

“A country/region becomes super app ready when its large base of the population is smartphone first instead of desktop and the ecosystem of apps customised to local needs is not evolved,” Indian startup industry watcher RedSeer said in a report.

In terms of population and smartphone penetration, India is a prime breeding ground for a super app.  So where is India’s WeChat moment, or did it already pass by without anyone noticing?

This year, Sameer Nigam, the CEO of PhonePe, the payments arm of Flipkart, made it clear that the company is moulding its services into a multipurpose app. Intent on creating India’s first true super app, Nigam sent a team to China to understand the nuances of WeChat and others of its ilk. Currently, PhonePe’s ‘Switch’ feature offers commerce, ride-hailing, food ordering and bill payment options.

PhonePe rival Paytm ventured into super app territory a while back but hasn’t really seen the ecosystem effect that WeChat did in China. Paytm launched a gaming platform in June called Paytm First Games. At the time the payments unicorn said that it provides over 200 services on its payments platform.

Meanwhile, on the ride-hailing side of things, Ola and Uber are working on relaunching food delivery services while also integrating simple payments and postpaid options into their apps.

On the food delivery side, Swiggy is getting into the hyperlocal delivery of groceries, medicines and essentials, Zomato has started producing original digital video content, while hyperlocal delivery startup Dunzo has a rudimentary payments functionality through a wallet feature. These are all much tamer attempts than any super app the world has seen.

In the ecommerce sector, Amazon India spent $40 Mn acquiring Tapzo, a startup that aggregates a number of app-based services. Amazon now has payments, ride-hailing, and food delivery on its platform apart from Prime Music and TV.

Not to be outdone, Reliance Industries head Mukesh Ambani has also made it clear that Jio’s ecommerce app will also have a host of features at launch besides shopping, and according to multiple reports, it will literally be called “Super App”

Classifieds listing apps like Quikr, Olx and the JustDial — with its mega ad budget — are also diversifying into payments, jobs, and video content. Truecaller has mobile payments and micro loans while India’s most-used chat service WhatsApp is negotiating with the authorities to relaunch its payments arm.

“I think 4-5 apps have the best chances of becoming super apps of India: Paytm, WhatsApp, Ola and Swiggy. They have recurring use cases,” Rajesh Sawhney, CEO and cofounder of InnerChef, a foodtech platform, and GSF Ventures told Inc42.

“Travel, movies, gaming, content, money transfers are the low fruits as of now,” he added.

However, none of these apps — most of them segment leaders in terms of users and revenue —  have succeeded in grabbing any significant slice of market share in a different sector. A big part of this could be the maturity stage of the Indian startup ecosystem, which displays a lack of user loyalty, according to many of the investors and entrepreneurs that Inc42 spoke to.

Challenges Of Making A Super App For India

To understand why super apps are yet to take off in India, one needs to know the story of Hike — a homegrown messaging unicorn which tried to transform itself into a super app but failed.

Till the start of this year, Hike’s app had messaging, payments, cab bookings and news on the app. But in May 2019, it announced plans to unbundle its app. Unbundling takes an app or a piece of software and divides its features into smaller standalone apps or software.

At the time Hike CEO and founder, Kavin Bharti Mittal had said: “Because we believe that India is moving towards the western consumption model, any super app, that remains in the country, will not be what I call it natural super app, it’ll be a heavily incentivised super app.

Mittal’s assessment is bang on about the approach tech companies are taking to expand their engagement with users. In a developing startup ecosystem like India’s, the glut of competitors ensures that the most effective method of keeping customers on an app is doling out money in the form of cashbacks and discounts.

“The fact of the matter is that the Indian people like having a choice, in everything from biscuits to bags. They prefer to compare prices across platforms and get the best deals for themselves. Since most Indians are such pros at deal hunting, it becomes difficult for a single platform to deliver the best deal on each and every product and capture their attention,” Nair added.

But deep-pocketed investors are not the only requirement for creating a super app. Creating an app which everyone opens a few times every day is essential. Once that happens, it can keep adding layers of functionality to it.

“I believe in India, the winner would be an app that has the highest daily active users like BHIM, WhatsApp or Facebook Messenger,” Sanjay Mehta, the founder of venture fund 100X.VC told Inc42. However, the idea is in a very early stage right now, he added.

Over the last year, Hike shuttered its Bengaluru office and laid off 25% of its work force and is now focussing on developing its primary messaging platform with AI-enabled emojis and stickers.

Meanwhile, new-age startups like PhonePe and Paytm have pared down discounts, and JustDial has completely ruled them out. Ola scaled down FoodPanda to focus food delivery on cloud kitchen brands and omnichannel food retail. Giving out free cash is an expensive and risky customer acquisition strategy. Users simply migrate to another app as soon as one reduces discounts.

And this is where the gospel of super apps falters. Giving out free cash is an expensive and risky customer acquisition strategy. Users can simply migrate to another app as soon as one reduces discounts. In India right now, where most of the companies discussed above are haemorrhaging money on expansion and scrounging for new funds, the search for a super app can prove to be a very costly misadventure. High risk. But also, high reward.