Return Of Licence Raj: How The Government Is Stifling Innovation In The Commercial Drone Industry

Return Of Licence Raj: How The Government Is Stifling Innovation In The Commercial Drone Industry 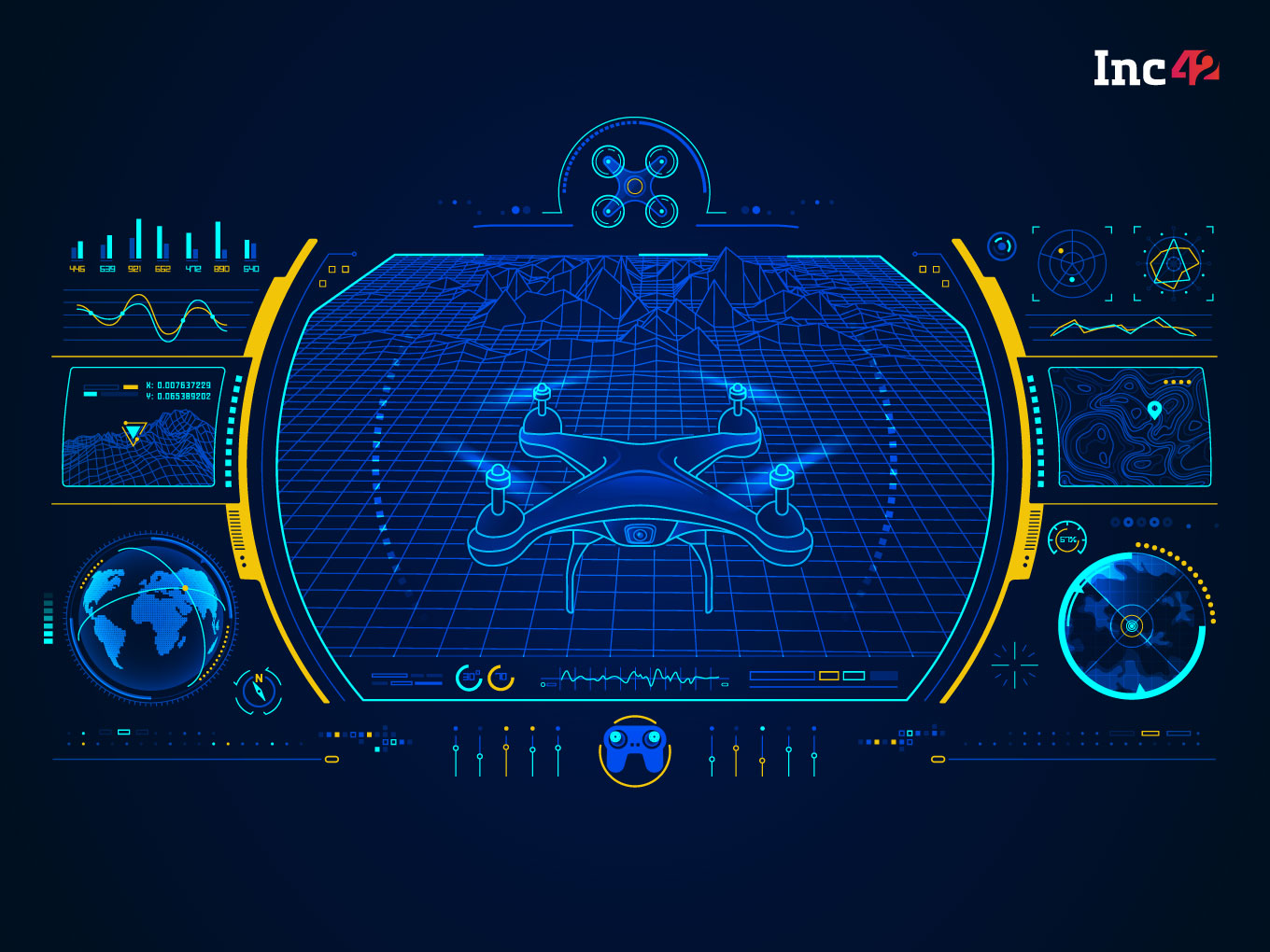 The latest drone rules will be a roadblock for all ongoing R&D work in the country, allege drone manufacturers

The Unmanned Aircraft System Rules, 2021, were introduced to push India’s nascent commercial drone industry, but the industry stakeholders feel otherwise. According to them, instead of enabling startups to experiment and grow, the new set of rules will push them back.

This was the customary reply from most of the drone industry stakeholders Inc42 spoke with. However, none of them wanted to speak on the record.

In this second part of our analysis of the government policy (read the first part here), we will analyse how in the name of regulating the industry, the government has chosen to choke its windpipe.

Among the key issues are multiple licences, permits and authorisation approvals that stakeholders may have to seek in person with no timeline defined for these approval processes, the stringent authorisation and other permit requirements that one may have to fulfil before initiating R&D on drones and the very limited number of green zones where drones are allowed to fly with automatic permission.

Barring the drone ports’ approval, this is in stark contrast with what ex-MoS for Civil Aviation Jayant Sinha-chaired taskforce had promised in the draft Drone Regulations 2.0 framework. Released in January 2019, the draft recommended the creation of drone corridors for beyond visual-line-of-sight operations, drone deliveries and more.

Releasing the draft, Jayant Sinha had then said, “India is set to become a global leader as far as the drone ecosystem is concerned. It is important for us to have a policy road map and regulations that support the growth of the drone ecosystem.”

The Return Of The Licence Raj

“I want the corruptions of the Permit/Licence Raj to go… I want real, equal opportunities for all and no private monopolies created by the Permit/Licence Raj,” – Chakravarti Rajagopalachari, last governor-general of India while opposing Nehru’s heavy regulation policy on various industries in 1955.

While Prime Minister Narendra Modi is a votary of minimum government and maximum governance, the same does not reflect in the fine print of the UAV rules, 2021. It is nothing but the return of the licence raj for the drone industry where you need a licence — an authorisation certificate — for everything, including its small components. 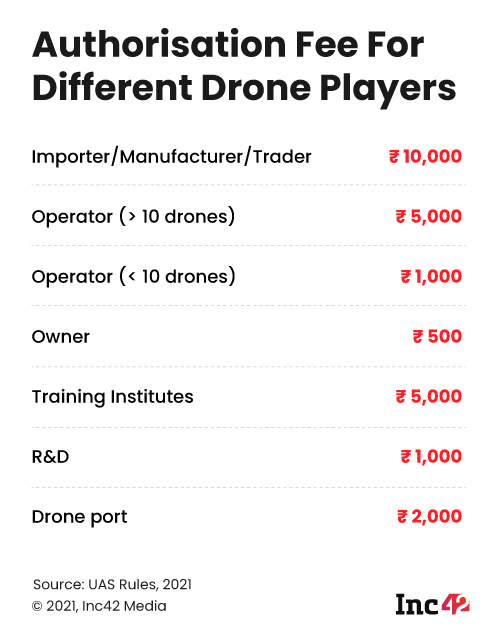 One needs to apply for more than half-a-dozen certificates, permits and licences, including manufacture and airworthy, security, insurance, landowner’s permission and so on. With each application, comes a specific fee that a candidate has to pay. For instance, if a startup is applying for an unmanned aircraft operator permit (UAOP) at Digital Sky, it will have to first pay INR 25,000 (for large drones) at the Bharatkosh website, generate the receipt and will have to return to the Digital Sky and upload it as part of the application process. Similarly, if someone wants to renew the permit, the person will have to pay 50% of the initial amount. 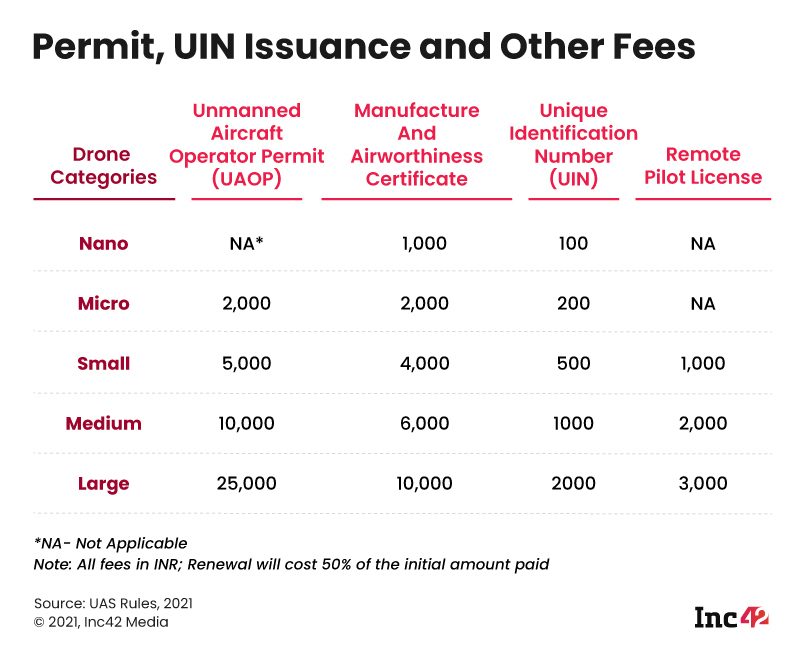 The government’s push to the drone industry in the form of the Digital Sky platform has also failed in its mission, according to industry stakeholders.

In 2018, Digital Sky was conceived as an umbrella platform for all drone-related activities, right from registration and licences for manufacturers, operators and importers to controlling and monitoring drone flights across the country to ensure the smooth functioning of the NPNT (no permission, no take-off) protocol.

But even if one completes the application process on Digital Sky, the applicant must visit the regional DGCA office in person and get the security clearance.

There is no timeline defined for these officials. One of the startup founders that Inc42 spoke with said that it had filed its security clearance five-six months ago, but it was yet to get the certificate. “At every visit, the standard response is: We are looking into it,” said the founder.

India has been a country of jugaad since time immemorial. There are umpteen examples of individuals making breakthrough innovations such as a mechanic building cheap helicopters with the help of his autorickshaw and more.

However, this new policy eliminates such scope for innovations by individuals that industry players could have later adopted. It also presents a plethora of roadblocks for organisations that include startups, colleges and R&D institutions interested in building drone products.

According to the new rules, the organisations associated with drone developments will have to register first and get authorisation from the DGCA. They will also have to share the list of components used in the development and get approval for each component before buying them.

Even if the prototype is being built by an organisation that has received the authorisation from the DGCA, it will have to produce the prototype along with design documents to try and test the same at the designated test site. It will also have to apply for the unique prototype identification number first and its issuance costs around INR 500. The cost will go up if the organisation is working on multiple prototypes.

“Getting a unique prototype identification number is not enough. Even if you go to a test site and want to fly it, you have to first take permission from the air traffic controller, then the air defence directorate and controller and then the local authorities,” said a drone developer.

Even after getting all required approvals from different authorities, the prototypes will be restricted to fly up to a height of 15m. And here is the catch.

Certain types of drones fly at a very high speed and must be flown at a minimum height of 60-70m. “The designated height of 15m is lower than the height of a building. So, what are you supposed to test within 15m?” asked a startup founder.

Another startup founder, who has been in the business for six years, is equally unhappy. “The rules seem to have been written by a novice. It is completely impractical. Imagine if you are planning to develop a drone, you will have to first get the authorisation from the DGCA for all the components used. Then you will have to submit the design prototype and all technical details even before you start developing the drone. Later on, you will have to search for test sites to get approval for test flights. But it does not work like that. You do not know whether the components approval list is final or not. You will always have to borrow more components as you develop. Or will you go and seek the DGCA approval once again?”

As many as 50% of the drone startups with whom Inc42 spoke for this story are now considering to move their R&D operations outside India.

The U-Turn On Green Zones

The DGCA has divided the country’s landmass into three categories — red, yellow and green. Areas like airports, defence bases and government headquarters have been marked as red zones where commercial drones are not allowed to fly. Yellow zones, on the other hand, are controlled areas and drones require specific permissions to fly there. Green zones have been specifically marked for commercial drones to fly under the NPNT rule.

In August 2020, Amber Dubey, joint secretary at the ministry of civil aviation, confirmed that both green zones and yellow zones were activated on Aug 15, 2020. It was also widely reported on the government’s behalf that almost 70% of the country’s landmass would allow drones to fly under the NPNT protocol. But this seems to be a thing on papers only, according to the startup industry.

Initially, there was an understanding that the DGCA would list the red zones and the yellow zones, while the rest of the landmass area would be automatically treated as green zones. But that never happened.

“There are more red and yellow zones in India compared to green zones. If we put forward a list of 100 green zones for approval, the approval comes for only 30,” said another startup founder.

The green zones are defined as circles with a 5 km radius. The government has so far approved 57 green zones across the country.

A startup founder who has assembled his own drones and received UAOP had a similar grouse. “It is not at all in favour of conducting a straightforward business. If you cannot even recognise the green zones in two years, it shows the inefficiency and the incompetence of the DGCA officials. This is why we suspect their ability to run Digital Sky,” the founder said.

There have been several other goof-ups with the Digital Sky as well. Besides the very limited functionality, it has been offering so far, there is a loss of a significant portion of data during the website’s transition from beta to the final version, one of the startup founders who was earlier associated with the conceptualisation of the Digital Sky platform pointed out.

In such a scenario, the slow speed of authorities is killing the spirit of the industry fast. The lack of government support and the unavailability of decent infrastructure will make India a laggard in an area that is set to define the modern world in many ways.