India’s online beauty and personal care market is estimated to reach $5.4 Bn by 2025, with an online penetration of 18%. The 10-year compound annual growth rate (CAGR) between 2015 and 2025 is 50% compared to 28% of the US. Rising internet adoption and a large millennial and the generation Z population have further increased the significance and utility of the consumer internet business in India.

Nykaa, a digital native marketplace and a D2C brand primarily catering to beauty and personal care (BPC) consumers in India, is the market leader in this segment where similar players like Purplle, SUGAR Cosmetics, Pureplay, Mamaearth and MyGlamm are also competing.

However, Nykaa’s position of strength can be readily ascertained as the company had the highest revenue share (18.5%) in the total addressable online BPC market in FY20, while its peers mentioned here held less than 2% market share.

Backed by the likes of Fidelity, TPG Growth, Steadview Capital and others, Nykaa raised more than $145 Mn from 15 well-known global and Indian investors. The company clocked an operating revenue of $333 Mn in FY21, a 38% increase compared to $241 Mn in FY20. It is currently seeking a valuation worth $7.4 Bn through its IPO on October 28, 2021.

Although Nykaa leads the online beauty and personal care market in India, it is important to understand its long-term potential in this fiercely competitive space. To ensure a clear understanding of the same, Inc42 Plus has released Nykaa Pre-IPO Analysis: Growth, Opportunities, Risks & More, Report 2021.

From dominant market share to a high level of customer stickiness, Nykaa’s IPO documents highlight some key insights that portray a strong competitive position. Some of these include: Nykaa’s market share in the online beauty and personal care space is estimated to be more than 18.5% (calculated as revenue of FY20/TAM). It is the single largest share held by a new-age startup, while other competitors, including Purplle, Pureplay, MyGlamm, Mamaearth and SUGAR, hold less than 2% of the total addressable market.

Nykaa commands significant brand value and customer loyalty across the BPC market. In FY21, 70% of the total gross merchandise value (GMV) on the platform was generated by its existing customers. The share of existing customers in total GMV jumped 15 percentage points from 55% in FY19.

A sound financial performance in FY21, including positive EBITDA, free cash flow (FCF) and a high ROCE, indicates that the company’s fundamentals were strong in the financial year. In an ecosystem where only 1 out of 4 funded startups is EBITDA positive, showcasing strong financial fundamentals before an IPO will drive bullish sentiments.

With the growing adoption of consumer internet businesses in India, the market is outshining its traditional peers in terms of growth and return on investment. This has attracted the attention of the regulators as well as large-cap companies. Conglomerates such as Reliance Industries (RIL) and the Tata group pose a considerable threat (through their super-apps) to the long-term profit margins of consumer internet businesses in India. 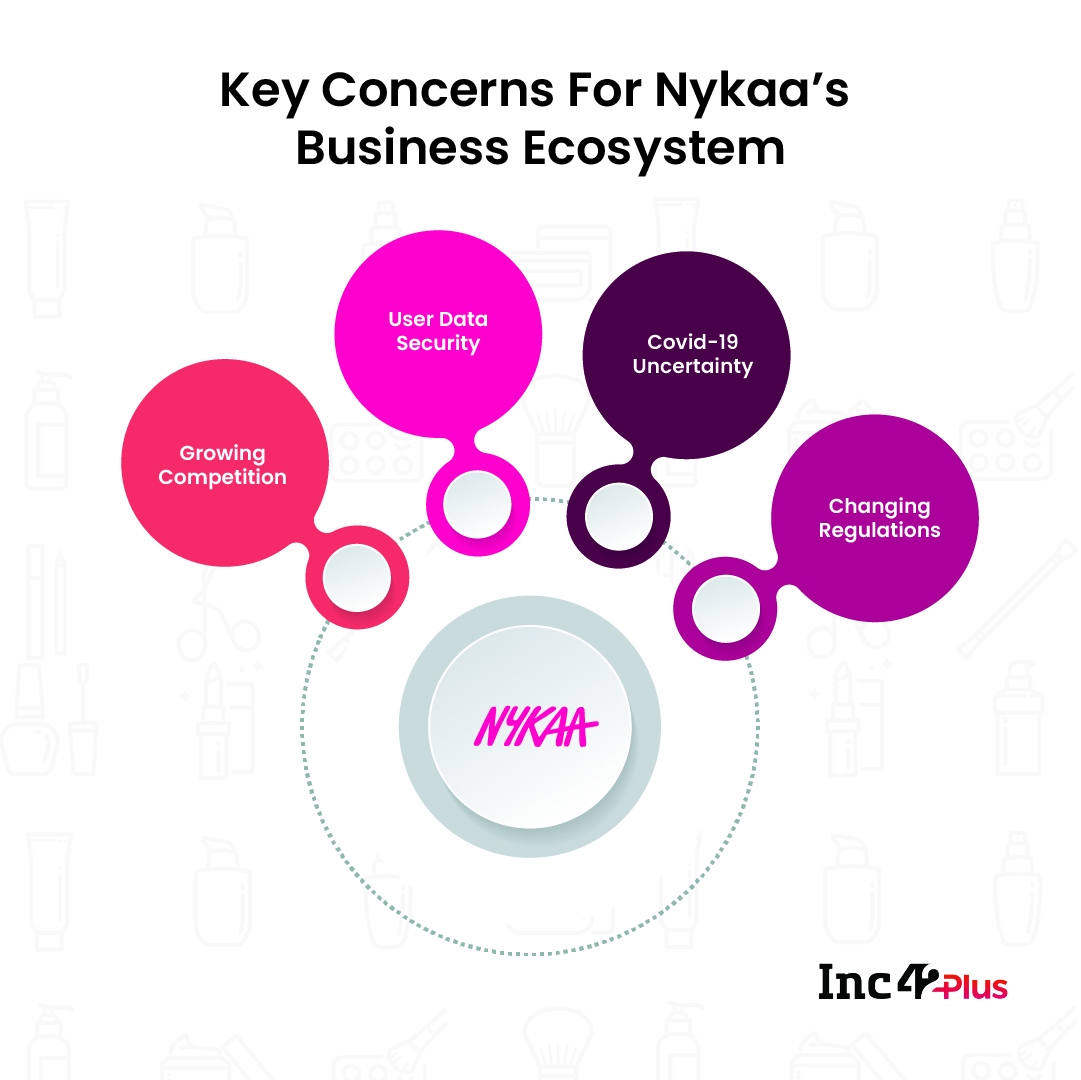 Growing Competition In The Market

However, the market competition for Nykaa will not be limited to other digital native rivals such as SUGAR Cosmetics, Purplle or MyGlamm. Instead, ecommerce giants like Amazon and Flipkart will also be in the fray as they consider the BPC space an emerging market for online retail.

It should also be noted that India’s legacy conglomerates like Reliance and the Tata group have already set the stage for the launch of their super-apps. Both these groups enjoy deep pockets and well-established brand value. Hence, they pose a significant threat to all independent consumer internet startups.

Today, the utility of technology is at its peak in India, and so is the risk of cyberattacks. A report by the Indian Computer Emergency Response Team (CERT-In) says that the number of cybersecurity incidents handled by the organisation has surged 23x, from 49.4K in 2015 to 1.2 Mn in 2020.

Consequently, data security and privacy are now a matter of utmost importance for Indian internet users. A survey by McAfee has revealed that 78% of the surveyed Indian internet users are concerned about their financial data being stolen (credit and debit card details, for instance), thus indicating that a cybersecurity incident involving the same could result in a serious churn rate and the number of active users could dip significantly.