NextBigWhat Betting on Fake Social Media Reach, Is this Ethical?

NextBigWhat Betting on Fake Social Media Reach, Is this Ethical? 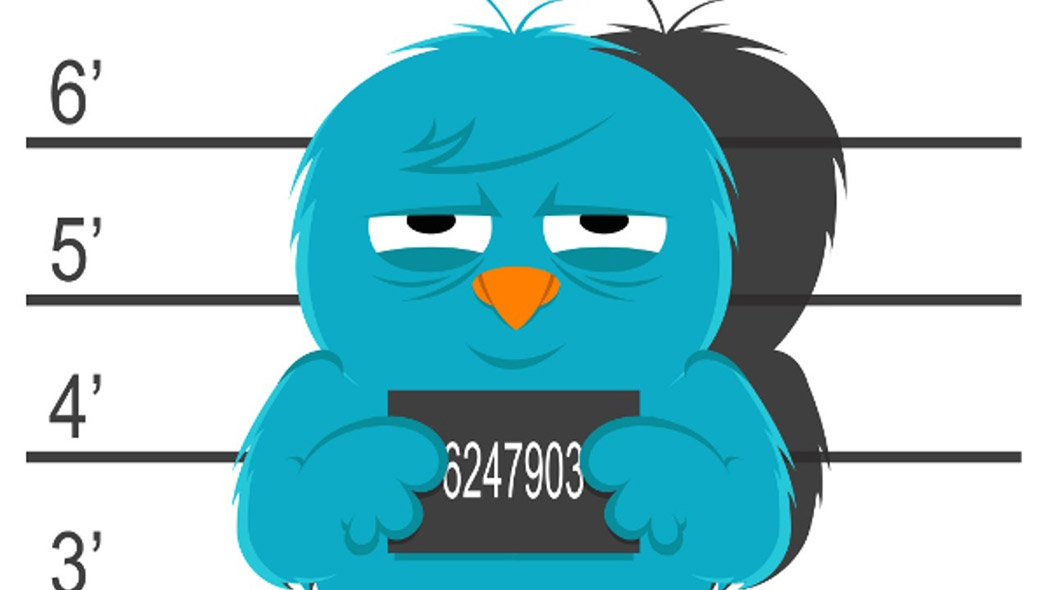 The media industry is a ruthless game of numbers, vanity metrics, content and attracting advertisers. Then there’s also question of ethics and staying non-biased. Most media companies have a hard time staying within this fine line.

Last week we noticed NextBigWhat, which touts itself as “India’s Biggest Platform For Tech Entrepreneurs” on their website and “A Global Media Platform For Technology Entrepreneurs” on their Twitter handle, had crossed this very line, not once but a number of times, despite the fact that it claims to be extremely ethical and a worshipper of quality.

It all started when we noticed a sudden jump in their Twitter follower count to around 68,000 followers (at the time of writing) over a short span of just 10 days from just 18,000 followers. Yes, a jump of 50,000 or nearly 280% in just 10 days! Anyone who has a Twitter account will know that this kind of jump is impossible, even if Oprah tweeted out to her followers asking them to follow you! In the 5 days since we collected the below mentioned evidence, their following has grown to over 85,000 followers!

This got us digging deeper and what came to light just confirmed our doubts furthermore. It turns out this was not a one off doing but rather a much more calculated move.

On investigating further, we found that this jump in following was seen not only on Twitter but also carefully done on their Facebook and Google Plus accounts.

Now let’s get on to some hard numbers so that you can see this for yourself.

PS. This might get a little geeky with a lot of numbers and data, so please bear with us!

So let’s start with Twitter, this was the first thing we noticed. Here’s the follower count nicely graphed for everyone to visualise, courtesy TwitterCounter.

Okay so that was a nice little jump in followers in just 10 days, growing at an average of 4,500 followers per day! It was very much stagnant before that spike and for a couple of days after as well. It now looks like there’s going to be another big jump over next few days, which you can follow by yourself..

Just to make sure this isn’t some common thing observed in other media portals as well, here’s a comparison of the follower growth with YourStory.com’s follower growth, who was leading them by a big margin just before these jumps happened. 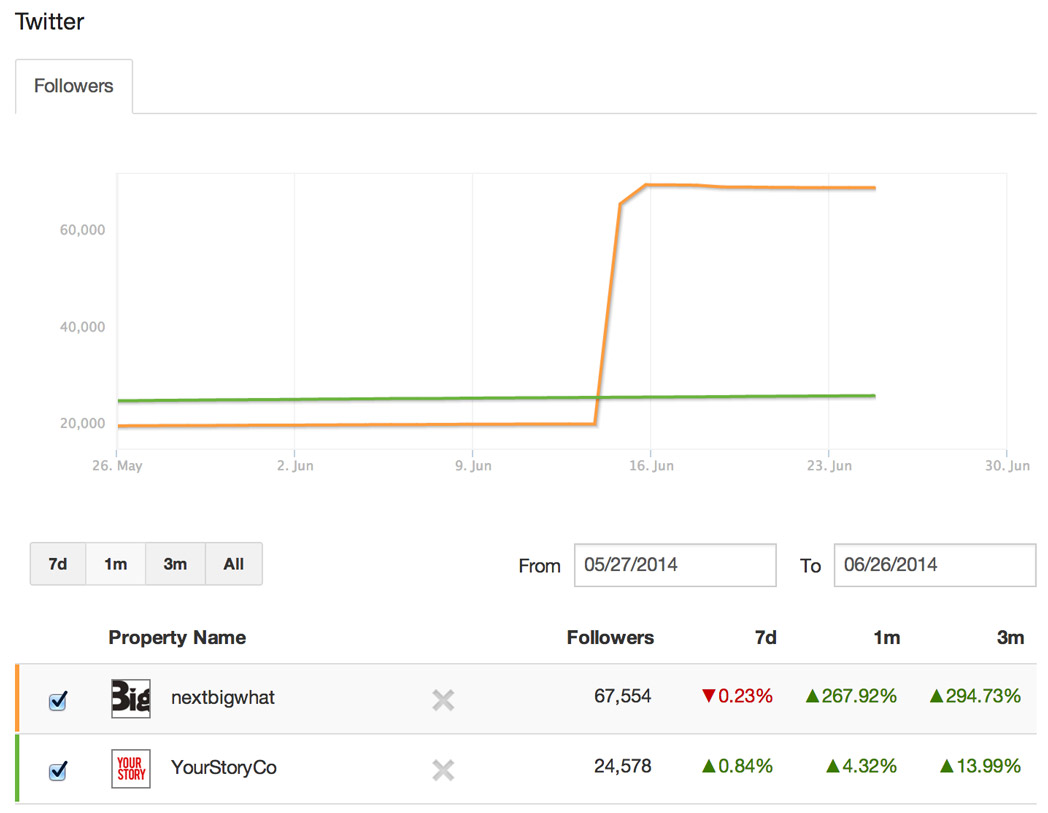 So next up, to be sure that this wasn’t the result of some “magical” twitter campaign that went viral (though there are no signs of much activity on their Twitter handle) or some “secret” Twitter advertising system which could explain the sudden growth in following we went even further.

We went ahead and scraped ALL their 70,000 odd followers and got a giant excel sheet in return with all the details about each and every follower! Here’s a nice snapshot of the kind of data we got:

That’s a nice little following they have suddenly built up in Japan! Also did we mention all these brand new followers from Japan, Indonesia, Russia are all being created and accessed from a few locations within the United States. It’s such a nice coincidence that so many Japanese and Indonesians were on a holiday in the US and then follow this particular Twitter handle. Oh and one more thing, most accounts seem to have last tweeted anything almost 1-2 years ago.

By the way, we’d be more than happy to share the complete excel sheet with anyone who would like to see further detailed proof, i.e if you didn’t have enough data from this post itself.

Next up we geocoded the locations of these followers using Google Fusion Tables and finally mapped out all the followers over a world map to give you an idea of where these nice sincere new followers are coming from.

So the key points to interpret from this map are:

We also went ahead and ran a Twitter audit via TwitterAudit.com & FollowerWonk to give you some more analysis and data on these followers.

This audit clearly shows that only around 14% of their followers are real and over 86% are fake.

This graphic shows that 91% of their followers have negligible social authority, i.e are not at all active on Twitter.

Here you can see almost 25% of their followers don’t even have a single follower on Twitter and over 52% have less than even 49 followers. These are clear telltale signs of fake Twitter accounts. More on this later.

Now some key points to notice from these audit stats:

All this reinforces my theory of fake accounts being bought to fake their Twitter followers and reach.

And the best part is the growth in followers has started again after a standstill of a few days. You don’t have to take our word (data) for this, you can witness the growth with your very own eyes in realtime.

We found a similar trend for their Facebook page likes and Google Plus followers. We’ll keep this part short and quick.

Here’s the growth curve for their Google Plus followers, which has been growing at a nice little average of 1000 followers per day since February, to a mammoth 152,000+ followers. Now that’s some consistency in growth.

So from all this i guess you’d have figured outthat this kind of growth in followers is unnatural and has been faked.

So can this be done easily?

You can purchase 1 million Twitter followers for about $1,750, as noted in Social Media Faking It – Cheaper Than You Think. According to Fast Company’s recent Social Media Road Map, it costs a mere $77 to buy 5,000 Twitter follower bots at buytwitterfollowers.org. Using usocial.net, a more substantial fee of $617 will get you 4,000 Facebook fan bots.

Facebook estimates that between 5.5% and 11.2% of accounts are fake. So Twitter isn’t the only platform plagued by imposters. A quick Google search for “Mitt Romney Twitter Followers” will return dozens of articles discussing how his follower numbers spiked suspiciously, quite similar to what happened in the case of NextBigWhat’s follower count. Security firm Barracuda Labs created an infographic based on its research breaking down Romney’s newfound Twitter fame, sharing that one in four of Romney’s new Twitter accounts had never sent a single tweet.

One of the parameters by which authenticity is measured is the activity level of one’s followers. These followers are auto generated en masse by “bots.” These “followers” make the status seekers appear influential, even though there are no humans behind them. Such spurious accounts are inactive, never issuing tweets or re-tweeting others’ messages and thus relatively easy to identify as fake.

The Mitt Romney news inspired a number of social media management companies like StatusPeople and SocialBakers to develop Web tools that try to determine what percent of a person’s Twitter followings are fake.

But those sites have hardly deterred people from faking their social influence by buying fake followers and fake retweets. The market is also becoming more sophisticated. In many cases, high-quality false  Twitter accounts are nearly impossible to discern from the real thing. Those that sell them claim that they can make up to a million dollars in one week.

The most sought after fake accounts tweet (or retweet) constantly, have profile pictures and complete bios, and some even link to Web sites that they claim belong to them. But in many cases, a close look reveals that some of the accounts were set up purely to retweet material from specific sites.

The two noted that while Facebook requires that users use a real e-mail address, Twitter does no such thing.

To prevent fake accounts, or what are called “bots,” Twitter asks people trying to create multiple accounts from the same I.P. address to answer a “captcha.” Captchas — those puzzles used by e-commerce sites that require people to type in a set of distorted letters and numbers — are relatively easy for humans to read and retype but difficult for machines to decipher. But the researchers point out that new softwares can beat captchas, or people can be paid to type them in, in real time, for as little as a penny per captcha, or even less.

The two spoke with one reseller who had written software that could create up to 100,000 new accounts in five days.

“Business is great,” he told them, adding that he had hired a couple of freelance programmers, and that “a kid could bypass Twitter’s defenses.”

A kid could bypass Twitter’s defenses.

We spoke to a number of advertisers and industry veterans about what they looked for while deciding to advertise on any media portal, blog or content site.

“Besides looking for portals catering to our target niche, we evaluate the website based on it’s reach, i.e. it’s traffic and it’s social following. Since we can’t actually measure or verify their actual traffic, social media reach plays quite a vital role.”

This is where the defrauded become the fraud, relying on bolstered numbers to dupe others into legitimacy.

The biggest victims are the readers of the publisher who believe the lies.

Startup media portals not only covers or highlights the upcoming trends and new companies, they also sets an example for budding entrepreneurs. If the influencers of the ecosystem cross the line of ethicality, then to whom will the entrepreneurs of this country look up to?

Media portals are the critics of the ecosystem, the differentiator between the right and the wrong, glorifying what needs to be showcased. If the critics themselves start playing foul, then they just become any other commercialised product and not an authority which can command respect or act as a regulatory body.

How can you critique others and talk about ethics, when you yourself are indulging in such unethical behaviour.