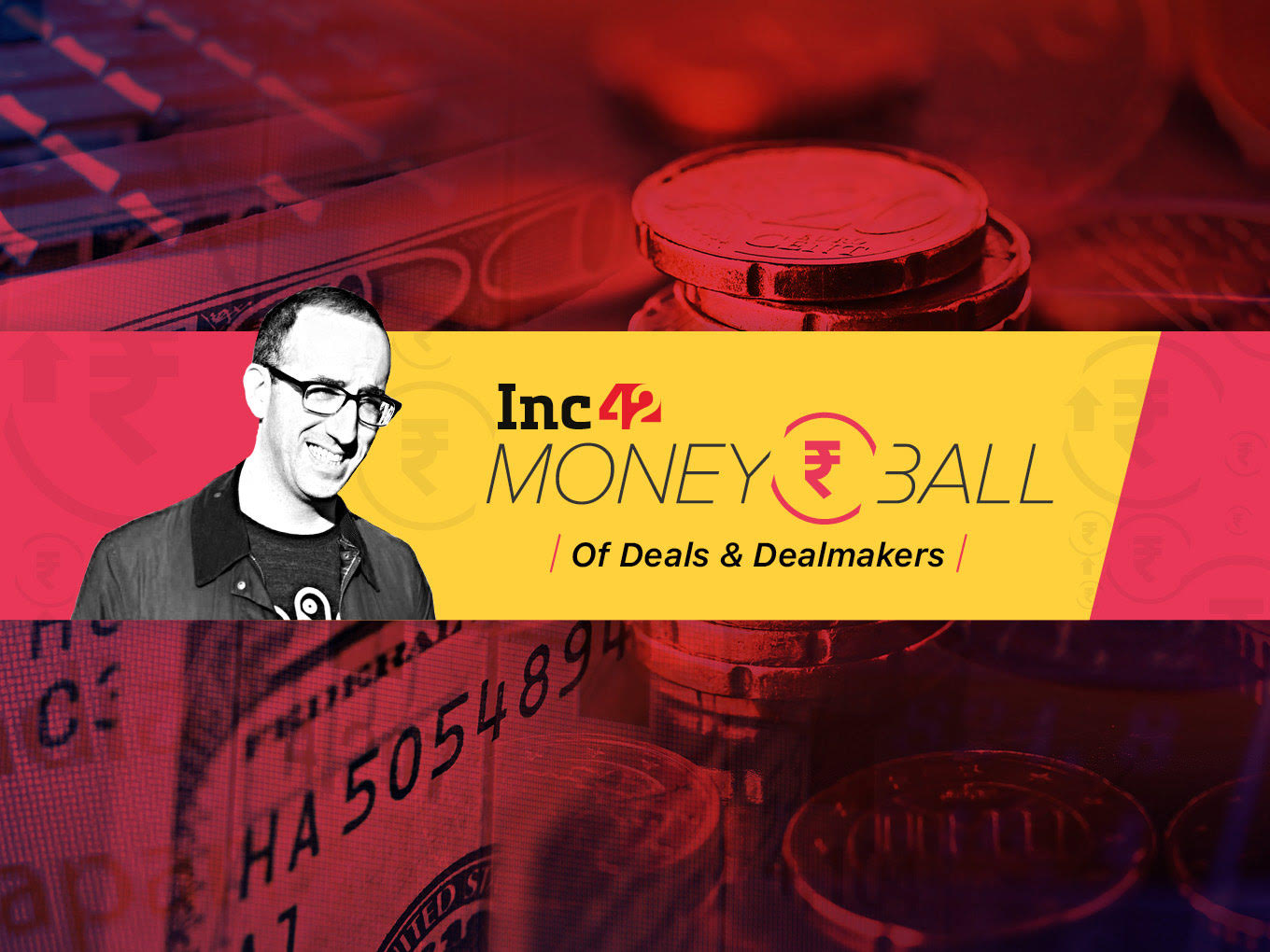 Mark Kahn, the founding partner at Omnivore, believes that the answer is a no-brainer as when the opportunity involves feeding 1/6th of humanity and taking part in the ecosystem that makes that happen. Founded in 2010 by Jinesh Shah and Mark Kahn, Omnivore started operations in 2011 and is entirely focused on the agritech space in India.

Kahn previously served as the executive vice-president of Godrej Agrovet and has over 14 years of experience working in the agricultural sector in India. He believes that the agritech space in India “is ripe for disruption.” The VC firm aims to be the catalyst that sparks the disruption.

Omnivore’s list of portfolio companies includes GramCover, an insurance marketplace for rural India; Stellapps, which claims to be India’s first dairy technology solutions company that uses cloud computing and data analytics for dairy farms; and Skymet Weather Services, which also claims to be India’s top provider of risk solutions for weather and agriculture.

According to Kahn, as of March 2017, more than 5.2 Mn Indian were using products and services developed by Omnivore portfolio companies and all this has happened in a relatively short period.

Mark also adds that the change is already rapidly happening, but people are not as aware of the changes being brought by technology in agriculture. This is because most journalists, corporates, and VCs live and think in urban India and don’t have complete visibility into the transformation that is happening in rural India. 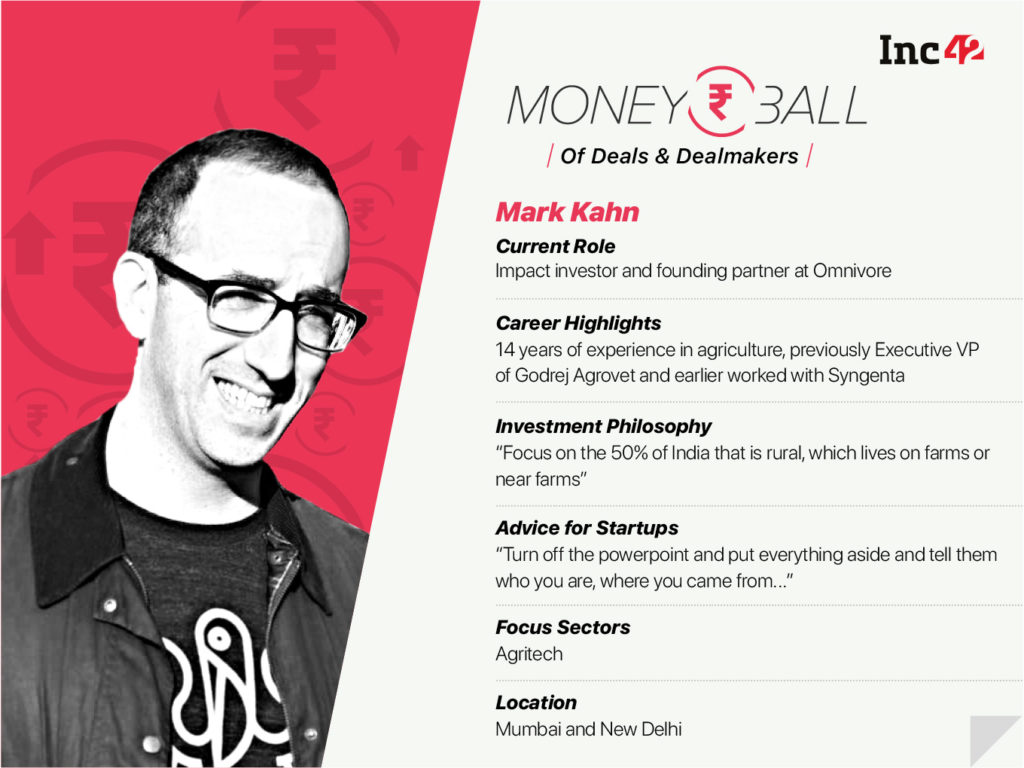 Here are some excerpts from this week’s Moneyball with Mark Kahn of Omnivore :

Mark Kahn: Most Indian VCs focus on urban India, that too in the top quartile of the urban population. We, at Omnivore, focus on the 50% of India that is rural, the India that lives on farms or near farms. We focus on the 20% of the Indian economy that is linked to agriculture. This is a space that is ripe for transformation.

Indian agriculture is primarily driven by small and mobile farmers that number anywhere between 100 Mn–120 Mn, but India has produced some of the biggest agribusiness companies in the world that either buy from or sell to these small farmers.

For example, look at Jain Irrigation, one of the largest drip irrigation companies in the world, Mahindra Tractor Company, the biggest tractor company in the world by volume, and UPL, one of top 10 agrochemical companies. The more we can link with and equip farmers with technology, the more we can accelerate the transformation taking place in agriculture.

Inc42: What role does Omnivore play in all this?

Mark Kahn: We believe that this space is ripe for disruption. In fact, while there are large corporates in the space, they are not very innovative and most of them terribly underinvest in R&D; the government, while well-intentioned, has execution issues.

When we look at what is going to catalyse the transformation (of agriculture) in India, we believe it is technology startups that will help them (farmers) overcome some of the challenges that they are facing.

So, Omnivore supports three kinds of startups — one, that develop agricultural technology for farmers; two, startups in the innovative food space where they are buying their raw materials directly from farmers; and three, startups that are working on enabling technologies for the rural economy, either fintech or storage related or cleantech.

Inc42: Ecommerce giants are getting into the e-grocery business in a big way. What do you make of it?

Mark Kahn: We welcome it. Someone needs to change the status quo, the mandi system which has existed since Independence absolutely sucks. We feel the interventions of players such as Walmart, Flipkart, and BigBasket can be incredibly beneficial. People are worried about potential exploitation, but the actual status quo today is terrible exploitation (of farmers). So, we welcome large, professional, and transparent buyers coming in and transforming the system, but the other thing that I would say is

..that it’s very important not to get ahead of ourselves.

I have been in this space for around 14 years. Back then, you would see these covers on the magazines — I remember one such cover featuring YC Deveshwar, the CEO of ITC. It was all about modern retail and how Reliance and Spencers would transform India.

And you know what has changed? Not a goddamn thing.

So, I am not holding my breath at the rate at which agritech players will go and do grassroots interventions as opposed to just procuring.

Inc42: Can you tell us about some of the challenges you see in agritech?

Mark Kahn: It’s very important to accelerate the growth of the food processing sector. The wonderful thing about food processing is that there are reliable and steady buyers all through the year rather than just once a year. They can source directly from farmers and create steady predictable demand for them.

One of the things that people don’t realise is that the problem for the farmers is not just of the price, it’s the certainty of the market and transportation to the market. If you look at some of these food processing companies, they procure directly from the farmer in their fields and they pay reliably.

You can’t have a situation wherein one year you decide to export sugar and the next year you don’t because the mills in Maharashtra are running dry. Nobody would say that’s a sane way to run a business.

We have a portfolio called Doodhwala, which procures directly from farms and small dairies and brings the products to the homes of customers on a subscription basis every morning.

Inc42: Any updates on investments from Omnivore’s second fund?

Mark Kahn: We have made two investments from the second fund — AgNext and Doodhwala. We are planning to make another three investments in this calendar year.

Inc42: What is your average ticket size, at what stage do you invest?

Mark Kahn: Our average ticket size is $1 Mn–$2 Mn and we look at taking a significant minority stake. We write seed and series A cheques.

Inc42: What are some of the red flags for you during a startup pitch?

Mark Kahn: You (the entrepreneur) haven’t quit your job yet, cases where there is really nothing innovative… it’s like, ‘hey this is a good idea that other people are also doing and you give me money and let’s outrace them.’ We like to see more differentiation.

Another red flag is if the entrepreneur hasn’t put any of their own money into the business and that was a mistake we made once in Fund One. If someone does not have their own skin in the game, then we have no business putting our money in.

If someone comes to you and you ask them if they have raised any angel capital and they say no and that they just wanted to raise from VCs, what I hear is that “I don’t have enough confidence in myself to raise money from family and friends.”

I love people who raise angel rounds, primarily because you are charismatic enough to sell an idea to your family and friends which is a good sign of your ability to sell more broadly and be competent because you will only turn to them when you truly believe in your idea.

Inc42: Your advice to startups looking to pitch?

Mark Kahn: I would probably say that the biggest thing is to tell a good story. You need to turn off the Powerpoint and put everything aside and tell them who you and where you came from. We like to understand the person and how he/she got there and what made them take that path.

Inc42: What is a typical work week like for you?

Mark Kahn: I don’t think people understand how non-stop the VC life is. It gives us a lot of empathy for what entrepreneurs go through. If you are VC that raised your own fund, you’re always raising money from LP investors; you are dealing with the administration of a fund, which is a complex thing in India; and you are trying to find new companies. So, you’re always attending meetings and hustling for your portfolio companies. Sometimes, that means aggregating the stress of 15-20 CEOs that you’ve invested in. It is an interesting job, but it’s kind of 24X7 and you don’t get to turn off.

Mark Kahn: As a VC, in theory, you can set your own schedule but, in practice, it is very much determined by your investors, portfolio companies, your pipeline, and what needs to get done.

So, yeah you can go ahead take the weekend off, but Monday morning onwards you are in catchup mode. That’s the nature of the job — we’re essentially there to help startups and we have an obligation (towards them).

Inc42: What have you been watching or reading of late?

Mark Kahn: I read a diverse set of sources on Indian and world news. I also try to slow down and read some books every month. I don’t watch cricket, but I am watching the FIFA World Cup and I am a Germany fan, hence I am bitterly disappointed.

I would say Marcus Aurelius’s Meditations is considered to be a pre-eminent example of stoic philosophy. He talked about what it was like to be a king and what it was like to have incredible responsibilities and challenges, and how to be a virtuous and just person in a bad world that doesn’t want to do good things to you.

I think this should be a required reading for every CEO. You need to have the mental strength to handle a lot of pressure and reading books like Meditation helps you understand that the challenges you face, that you believe are yours alone, have been faced by men and women for thousands of years. This piece of ancient philosophy is incredibly relevant in the modern age.

This article is part of Inc42’s MoneyBall series in which we bring you up close and personal with the pioneers of the investment world. Dive in to find out about what excites them, their views on the latest technology and investment trends and what the future looks like from their viewpoint! Explore more stories here.