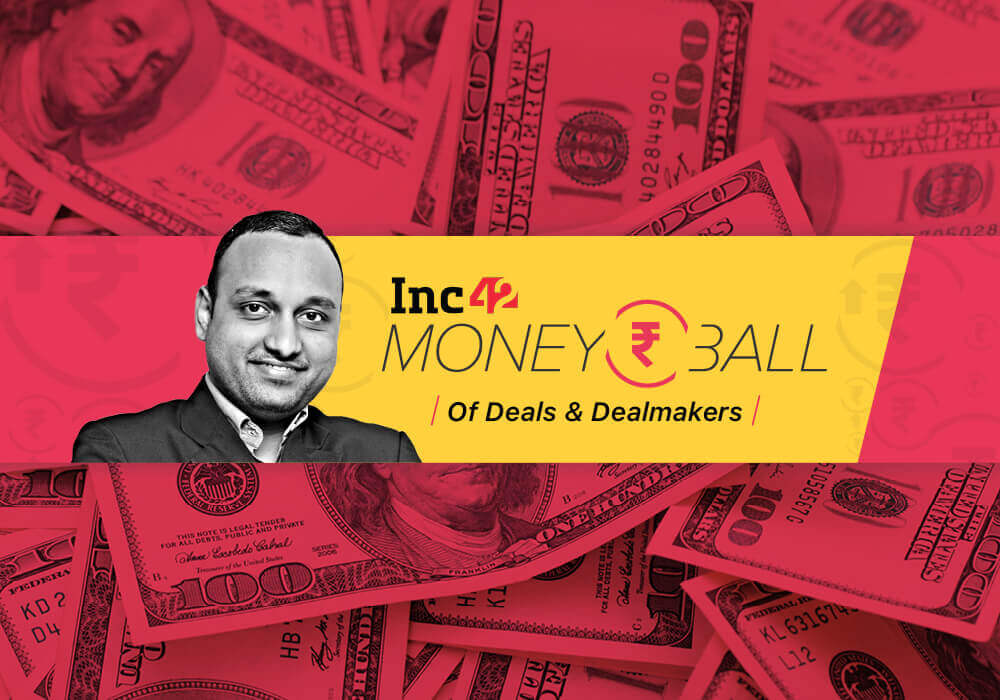 Navin Honagudi, the managing director of Kae Capital, is aiming at the next 500 Mn Internet users who are set to emerge from India as it is in line with the venture capitalist’s philosophy of backing strong entrepreneurs who can cater to the needs of consumers in large markets.

Kae Capital has raised over $78 Mn since it launched six years ago and is sector agnostic. It picks startups from areas as varied as consumer Internet, marketplaces, fintech, logistics, healthcare, and SaaS-enabled business.

Navin says the Kae Capital fund prefers to enter a startup at a time when it has the product-market fit established and is looking to raise the first institutional capital to scale up the business.

Navin also sees an inflection point in the current landscape when it comes to how VCs are perceived in India. He says people are increasingly now understanding the need for venture capital and for creating strong brands and large companies in a relatively shorter period of time.

Some of the active investments pf Kae Capital include Porter, which got an investment of INR 65 Cr from Mahindra and Mahindra as part of a merger agreement; Fynd, which is just the second direct investment made by Google for Indian startup; 1MG; and Healthkart. Navin earlier invested in startups such as Greendust; Inmobi, the first Indian startup to turn unicorn; and Myntra. 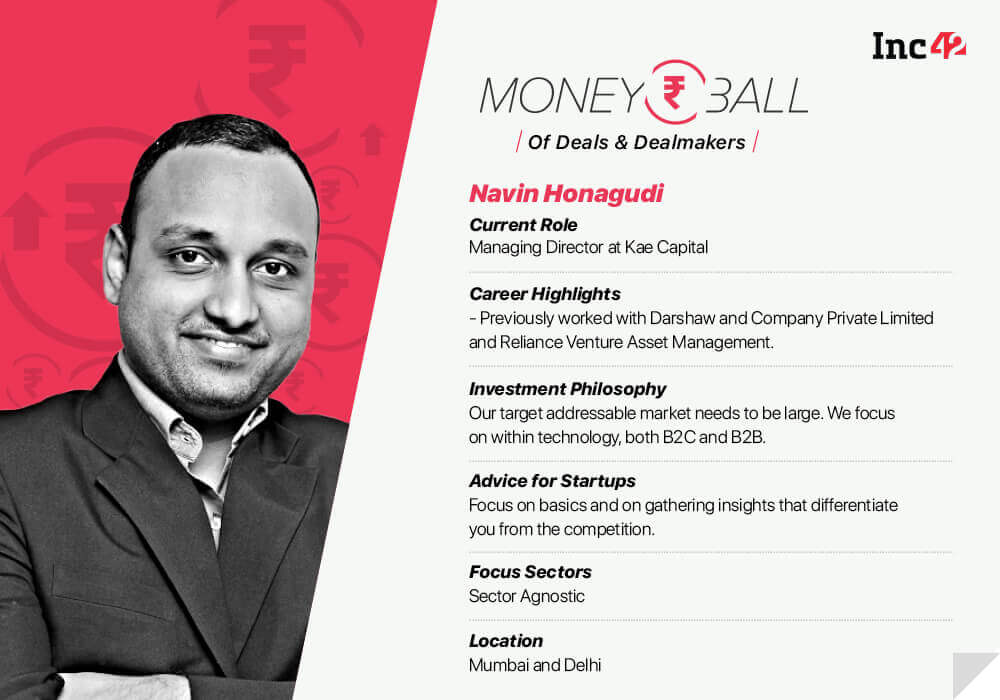 Here Are Some Excerpts From This Week’s Moneyball With Navin Honagudi:

Navin Honagudi: We focus on backing strong entrepreneurs who are focussing on solving a problem in large markets. For us, the target addressable market needs to be large. We focus on technology, both in B2C and B2B. Within B2C, our focus areas are consumer internet, marketplaces, fintech, logistics, healthcare (where there is a large consumer angle). In B2B, it is largely a SaaS-enabled business. We come (in) at a stage where hopefully the product-market fit is established and the company is looking to raise the first institutional capital to scale up the business. Both the sectors are of equal focus.

Navin Honagudi: We prefer to be the first institutional investor in the company, so you could think of us coming in during the angel round or seed or Series A.

Inc42: Do you not look at investing in the latter growth stages?

Navin Honagudi: We do that only with our portfolio companies as part of a larger consortium.

Inc42: What is your average ticket size and the stakes that you try to take in startups?

Navin Honagudi: Some of it is flexible, but on a median basis we do between $500k and $800k as the first cheque and the typical stakes we look at are in the 20%-25% range. We have invested in about 50 companies so far.

Inc42: What trend do you see emerging from within your portfolio companies?

Navin Honagudi: We look at identifying strong entrepreneurs and throwing them at tough problems in large markets. When we invested in Porter, we saw that the problem being solved was that of logistics in the intra-city market. It was a large enough problem to be cracked as there was nobody operating in that space and there was a problem to be solved. Similarly, in the pre-owned car marketplace, we have a portfolio company called Truebil.

Inc42: What are the opportunities you see emerging in the Indian startup ecosystem?

Navin Honagudi: We will continue to focus on healthtech, consumer internet, with a strong focus on creating a product targeted at the next 500 Mn users in India and also on consumer brands.

Inc42: Any updates on investments from your Fund 2?

Navin Honagudi: We have invested in a few consumer brands like Timla Foods, which runs a snacks brand called Popicorn; we have invested in a nutraceutical startup. We have made two other investments recently in the consumer brands space that are still unannounced and we’re going spend close to 20% of the fund on non-tech consumer companies. We currently have a good amount of capital to be deployed from Fund 2. Fund One is completely employed.

Inc42: Has there been a change in how VCs are perceived in India?

Navin Honagudi: The inflection point in India is finally happening — people now understand the need for venture capital and for creating strong brands and large companies in a relatively short period of time. So, essentially what venture capital does is that it helps you to form a strong brand in a period of four-five years, while understanding that the company is going bleed and not be profitable, but at the same time help it get there and then move to profitability.

Companies that are today unicorns of the ecosystem are the ones that were previously bleeding for five-six years before turning profitable and now are growing in a more sustainable manner. I think people have taken note of this and appreciated it. So, I think it is a very healthy situation today in the venture capital ecosystem where people not only inside but outside view this asset class very favourably and far more such asset classes (are likely) to emerge.

Inc42: How has your approach evolved over the years?

Navin Honagudi: Our first fund was $25 Mn and the current fund is double that, so clearly, the ticket size and investment amount has doubled from Fund 1 to Fund 2. When you talk about investing a large amount of capital in the same company, it is essential that you would want the company to have proven a few more things. We are absolutely fine taking risks around execution, markets, and so on, but since the fund has evolved, we would like to see companies that are slightly ahead of the curve rather than a pure business plan kind of investing.

Inc42: Way do you mean by ahead of the curve?

Navin Honagudi: I was referring to the maturity of the company when I mentioned that, so it may not be a company with just a business plan (we have backed companies with only business plans in the past), but probably we will be looking at a company that is closer to a product-market fit.

Inc42:  What advice would you give to entrepreneurs looking to pitch?

Navin Honagudi: Focus on basics, think about the problem you’re looking to solve, and on gathering insights that only you have and that the competition does not.

Inc42: What are some mistakes entrepreneurs make while pitching to investors?

Inc42: What is anti-portfolio for you?

Navin Honagudi: OYO. We met Ritesh (Agarwal, founder of OYO) in the middle or towards the end of 2013, but we couldn’t build conviction on the problem statement and, hence, we did not invest. We also missed out on investing in Delhivery in early 2012.

Inc42: What has been the takeaway from these anti-portfolios?

Navin Honagudi: The learning has been to not worry too much about the market size in the beginning. If you look at when Flipkart would have started out, the marketplace would have been small. Think through on the how the market will pan out in the next five years, especially with India adding on to the next 20 Mn transacting customers [and 20 Bn Internet users.]

Navin Honagudi: I am a morning person; I start work at 8:15-8:30 am, and spend weekends with my family. I shifted to Bengaluru just a couple of weeks ago as part of a move focussed on building the capabilities of Kae Capital in the city.

Inc42: Are most of your portfolio companies Bengaluru based?

Navin Honagudi: No, it’s a mix of Bengaluru and Delhi, largely, with some in Mumbai, Pune, Chennai, and Jaipur.

Inc42: What are some of the challenges that you face in your line of work?

Navin Honagudi: We live and breathe within the companies that we invest in, so the challenges that they face are the ones we also face. Largely, it could be in terms of hiring the right set of people and getting the consumer acquisition cost low.

Inc42: What have you been reading or watch of late?

Navin Honagudi: Shoe Dog — it is about Nike, which was started by Phil Knight and the problems he went through while creating and running Nike.

This article is part of Inc42’s MoneyBall series in which we bring you up close and personal with the pioneers of the investment world. Dive in to find out about what excites them, their views on the latest technology and investment trends and what the future looks like from their viewpoint!