By talking about allocation for eVIDYA and delivery of learning content through the internet and mobile phones, the government is essentially looking to compete with edtech players

An Annual Status of Education Report survey from October 2020 revealed that about 43.5% of children in government schools had no access to smartphones

The past track record of government-driven digital platforms has been less than impressive, so the focus should have been on bridging the digital divide and enabling access to devices

While the Union Budget 2022 has been called a budget for startups and digital India, one sector that should definitely feel a little sore is edtech. After all, if the government follows through with its plan of launching a digital university, rolling out more content for online learning and training teachers, it’s more or less entering into competition with edtech companies.

Given other recent official notifications targeting edtech partnerships with universities and discussions in the parliament about the affordability of edtech products, it would seem the government is looking to get a tight hold on the education sector.

It’s certainly not out of the government’s purview to take a more hands-on approach to addressing the online education challenges. When it comes to education, the Indian government has been conservative to say the least. It has a tight regulatory setup for education. So naturally, it would not want to hand over the reins of the education system to startups and edtech unicorns, but at the same time, one could also say that the government should not be in the business of business.

Let’s be clear: No one is advocating for government to give edtech startups unchecked freedom in partnering with schools or colleges, but instead, the government could have saved plenty of time and money with private public partnerships for the expansion of the eVIDYA programme and delivery of learning content through the internet, mobile phones, TV and radio.

Essentially, with the announcement at the Union Budget, India’s government is entering the space that is currently occupied by a slew of K-12 edtech startups. This is the biggest sub-sector in terms of funding and also has the most number of startups. Startups in the K-12 are considered to be supplementary to the school curriculum, but now the government is looking to have control of both offline school education and online learning.

Although a lot of digital content has been generated and transmitted to help children continue to learn, there is limited evidence on the extent to which this content is reaching children; whether they are engaging with it; and the impact it is having on their participation and learning. Content is not even the real problem.

The Annual Status of Education Report (ASER) — Wave 1 survey in October 2020 revealed that about 43.5% of children in government schools had no access to smartphones. Other than textbooks, only about a third of students received learning materials through mediums like WhatsApp, phone calls, recorded videos or online classes.

The problem is not about availability of learning content or even the fact that such content is only paid — indeed free courses and lessons are aplenty on Khan Academy or YouTube. The problem of course is access.

So the Modi government is missing the forest for the trees. In that regard, it might have been more prudent to increase budgetary allocation for providing devices or subsidies for learning tools. While acceptability and adoption of edtech has grown immensely among the digital-haves, distribution has remained the biggest challenge due to the digital divide. 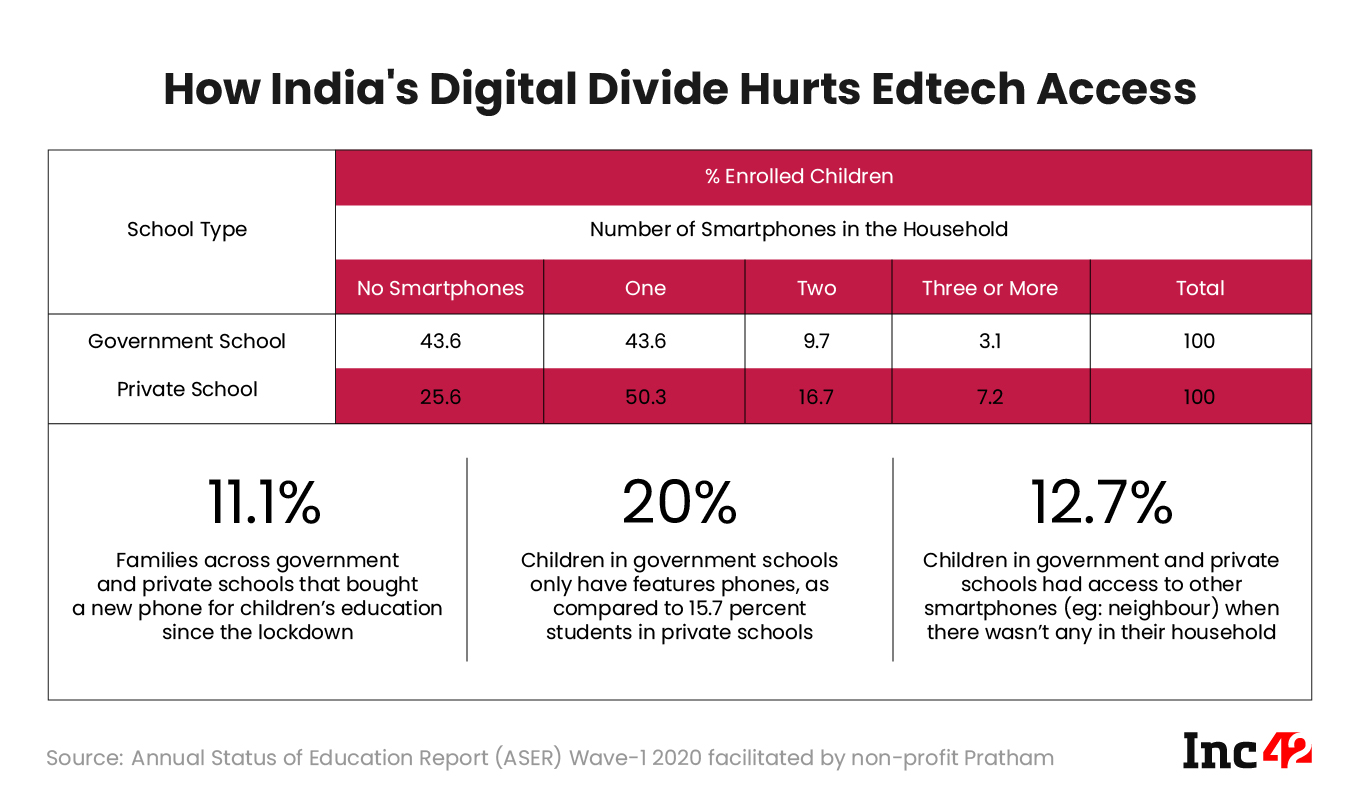 Even with a tablet or smartphone device in the household the usage of the devices is not always guaranteed for the student. When they could get access, the ASER survey said more than 12% had to borrow it from someone. Just 3% of households with students in government schools had more than three devices at home. The disruption to education forced many students to drop out of school even after the lockdown was lifted.

It’s not just at the primary school level. Even at the college level, we saw student protests in Delhi and other cities in the last couple of years over online examinations, which also face the same access problem.

What About The Tech In Edtech?

“A competitive mechanism for development of quality e-content by the teachers will be set up to empower and equip them with digital tools of teaching,” Sitharaman said.

In this scenario, who will train the teachers and which digital tools will be used? Where is the technological knowhow within the government to execute this? How will the government keep up to date on the latest software and applications for these tools?

Nothing we have seen in the past indicates that the government is adept at creating tech platforms by itself. If one takes UPI or India Stack as an example, it was built in public-private partnership mode, backed by iSpirt.

Technology will be crucial in delivering a great user experience as well with good support across a range of devices. It took companies years to get the right product-market fit, and edtech giants are engaged in a talent war to get the right team in place. Even if the government launches a digital university, at the end of the day, if the infrastructure is not good enough, students living in remote places and villages will have problems accessing it.

Nobody wants a repeat of the income tax or GST website glitches and crashes during examinations. The past track record does not fill one with confidence.

Calling For A Product-Driven Government

And let’s not even try to understand the point of a digital university when distance learning has existed for years. We need the powers that be to take a product-driven approach if we are to find solutions to the systemic problems in India.

The government cannot afford to offer lip service and or spend millions of dollars to try and emulate what is already done by some of the biggest edtech companies in the world.

The Union Budget’s focus should have been on allocation for subsidies to purchase devices or to provide devices to students in India. Instead of blocking edtech startup tie-ups with universities, it should aim to create an intermediary body to tackle any potential problems in colleges and universities tying up with edtech platforms instead of taking on the burden.

Edtech startups and technology has unburdened much of society from thinking about how students and the youth will get their education in the pandemic. It was almost taken for granted and although there have been tough questions around affordability, the vastness of the edtech market has increased the competition and given students and parents more options.

Companies have even formed partnerships and tied up with state governments to provide education during the past two years as seen with Toppr and Rajasthan, West Bengal and Schoolnet, Eckovation and the Bihar state board.

The Modi government is looking to replace startups, whereas the focus should have been on supplementing the efforts of the edtech sector and capitalise on all the momentum of the past couple of years.