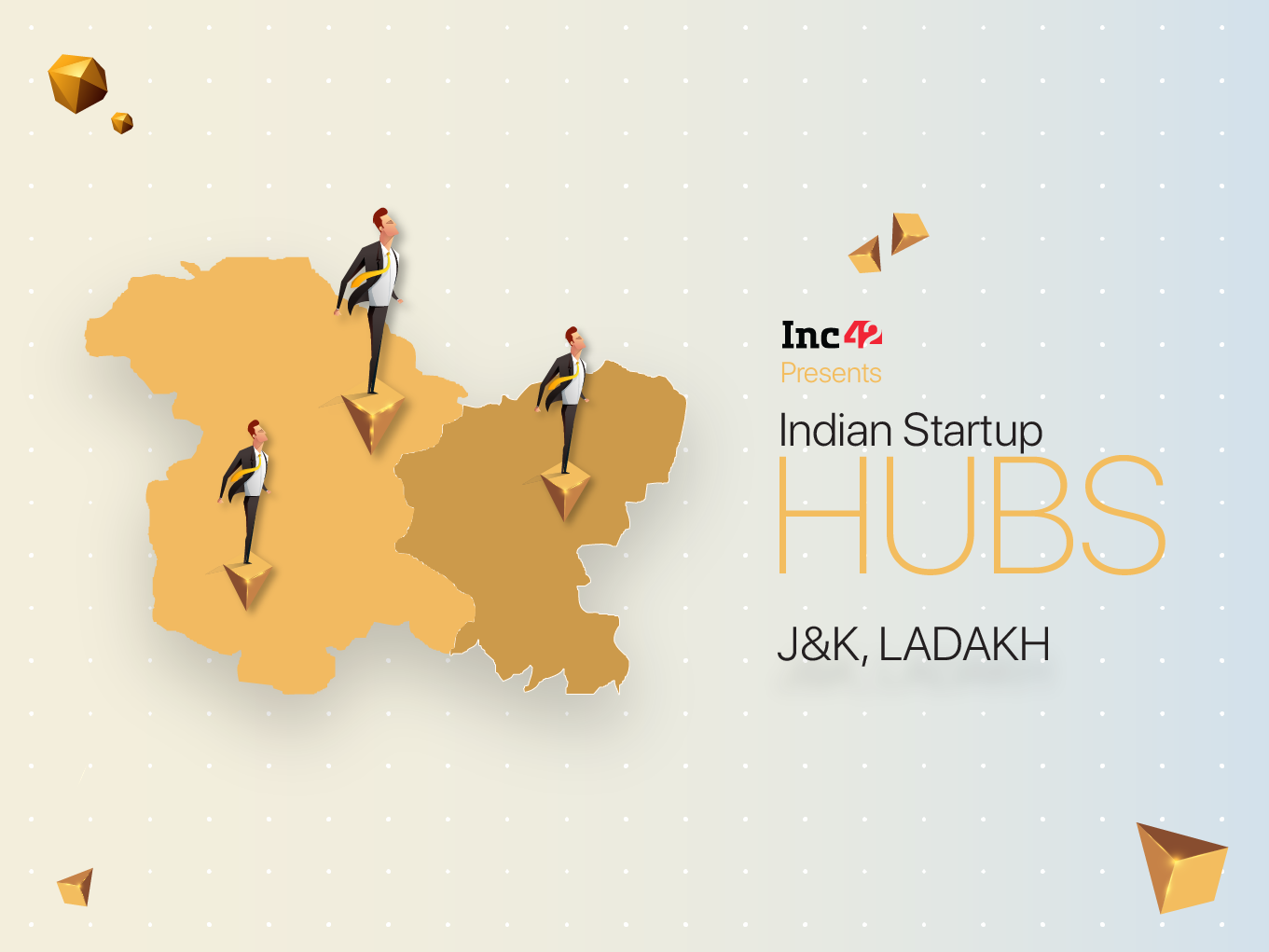 Some of the major startups in the region are Pashmina Goat Project, Kashmir Box and PureMart

It’s almost March 2020 and Jammu and Kashmir is about to enter the eighth month of internet shut down. Even though the Indian government restored 2G services in Jammu and Kashmir on January 25, 2020, the services are limited to only whitelisted websites, which also don’t function properly due to the restrictions on other sites. Meanwhile, the internet services in the union territory of Ladakh were restored in December 2019. With the internet being the basic ingredient for tech startups, how are the J&K and Ladakh startup ecosystem surviving through this blackout? We spoke to startups in all the major regions — Jammu, Kashmir and Ladakh — to understand the severity of the situation.

In the almost eight months of internet ban, several startups had to wind up operations in both UTs. While some managed to get back on track after the prolonged forced slumber, others had to shut their businesses down for good.

That includes an edtech startup based out of Srinagar. The founder, who chose to remain anonymous, told Inc42 that the startup had spent close to INR 25 Lakh to INR 30 Lakh on establishing the business and was about to expand operations. With the abrogation of Article 370, all cellular and internet services shut down, which killed the hopes of scaling up the startup.

While agreeing that there are long term benefits to the revocation of Article 370 and J&K becoming a union territory, the edtech startup’s founder added, “In the long run, it does not matter, if everything has fallen apart now.”

Meanwhile, there are others that are willing to overlook the current disruption in the hope for a better future. With the revocation of Article 370 and J&K becoming a union territory, the startups in the region are rooting for central government’s intervention in the otherwise-slow startup ecosystem in J&K and Ladakh, several entrepreneurs told Inc42.

The startups in the region believe that the J&K Startup Policy, which is applicable in Ladakh even after the separation, has been just doing well on paper. Raghav Sharma, founder of ecommerce platform Golden Kashmir, told Inc42 that the J&K and Ladakh region are in dire need for “infrastructure development, better policy and tech sandboxes.”

Verma noted that the sectors mentioned are “not really startups, but are businesses”. He further emphasised that the J&K startup ecosystem, “needs policymakers that understand startups, and not just any bureaucrat.”

Meanwhile, Irtif Lone, head of the Centre for Innovation Incubation and Business modelling at JKEDI (Jammu & Kashmir Entrepreneurship Development Institute), disputed this notion. He told Inc42, “I believe there is a misconception about the startups registered. All the startups registered are technology-driven in various fields and have some serious innovation at the core.”

Owing to the policies and the available ecosystem in the region, several startups have decided to move out and start their operations in other states, Verma stressed. As many have left, some have decided to arrive to take what J&K has to offer.

Ram N Kumar, founder of NirogStreet, a Gurugram-based cannabis-focussed healthtech startup, decided to incubate in J&K’s Indian Institute of Integrative Medicine (IIIM), ignoring all the challenges of the infant startup ecosystem. Kumar highlighted, “Challenges are everywhere, but J&K also has a lot of opportunities, especially for the biotech startups.”

IIIM has also incubated Gurugram-based HempStreet, which is another cannabis-focussed healthtech startup. The startup recently raised $1 Mn in Pre-Series A funding round led by Pharmacon Holdings.

Here’s taking a closer look at some of these prominent startups from J&K and Ladakh region:

Pashmina Goat Project:  Founded by Babar Afzal and Henna Anjum in 2009. Afzal is a pashmina activist raising awareness regarding the endangered Pashmina goats. The company works will craftspeople from the Kashmir and Ladakh region to design and sell pashmina shawls in boutiques of Paris and New York. Each piece may take up to two years to develop.

Kashmir Box: Kashmir Box is an ecommerce platform that sells handicrafts and handlooms. The company was founded by Muheet Mehraj in 2011 and has been one of the most-funded startups from Jammu & Kashmir.  The company brings local artisans and farmers, producers, and local brands from far-flung areas of Kashmir on one platform, allowing them to sell their products to clients from 40 countries.

viaENS: viaENS is an edtech startup that provides digital marketing courses to build and grow blogs, websites and social media handles. The company was founded in 2014 by Arush Mahajan.

Fast Beetle: Founded by Sami Ullah and Abid Rashid in 2018, Fast Beetle is Kashmir’s first logistics company. The company also facilitates the growth of other startups in the new union territory by providing end-to-end service to the entrepreneurs, specifically women business owners.

Jos&Fine: Jos&Fine is a Kashmir and France-based startup that was founded by Aaditya Kitroo and France-based Safia Igranaissi. The company manufactures and sells authentic Ladhaki Pashmina. The company’s design studio and offices are set in France; meanwhile, the craftsmanship is conducted through its operational headquarters and team in Kashmir.

PureMart: Founded in 2012 by Sahil and Rajani Verma, PureMart is an ecommerce portal based out of Jammu. The company deals in exotic products from Jammu and Kashmir. This includes cold-pressed oils, Kashmiri saffron, Himalayan Honey, mountain garlic, and nuts, seeds and dry fruits and other products.

Go Kash Adventures: Founded by Danish Mir in May 2015, Go Kash is a tour and travel startup that offers small-group tours, expedition, and safaris across popular historical and geographical destinations across Jammu and Kashmir. Its packages include major tourist attractions, hotel accommodations and transport facilities.

KartFood: KartFood is an online food delivery service in Kashmir, which was founded by Furqan Qureshi and Amir Bashir. Initially, the company used to take orders through phone calls, but the company launched its website for online orders in February 2017. KartFood rolled out its mobile-application in April that year. The company also plans to diversify its services to include other items as well.

INR Deals: Founded by Siddharth Gupta in 2016, INR Deals is online deals and discounting platform. The company aggregates current deals being offered on ecommerce platforms such as Amazon, Flipkart, Zivame, Ajio and others.

Sesti: Sesti is an agriculture-focused startup that is looking to bridge the gap between the producers and the market through digital intervention. For this, the company is developing a mobile-based application. Sesti is founded by Ashraf Wani in 2019. The company is also partnered with Tata Institute of Social Sciences (TISS) to set up an institute of vocational studies for curriculum related to agriculture.

Nentoir: Founded in 2018 by Ishan Verma, Nentoir is an SMVDU-TBIC incubated B2B startup that focuses on making supply chain processes that are involved in developing integrated tech platforms.

TravelersDost: TravelerDost is a destination management company that offers travel services for Jammu, Kashmir, Ladakh and Himachal Pradesh. The company also has a brand called The Himalaya 360.  The company was founded by Vaibhav Sharma, Sonali Bhatia and Vinod Kashyap in 2015.

Looms of Ladakh: Looms of Ladakh is a women’s cooperative skill development initiative that aims to bring unemployed female artisans from the remote villages of Ladakh region. The company sources Changthangi Pashmina, Bactrian camel wool, yak wool and sheep wool from the artisans and sells it across the world. The company was founded by G Prasanna Ramaswamy and Abhilasha Bahuguna.