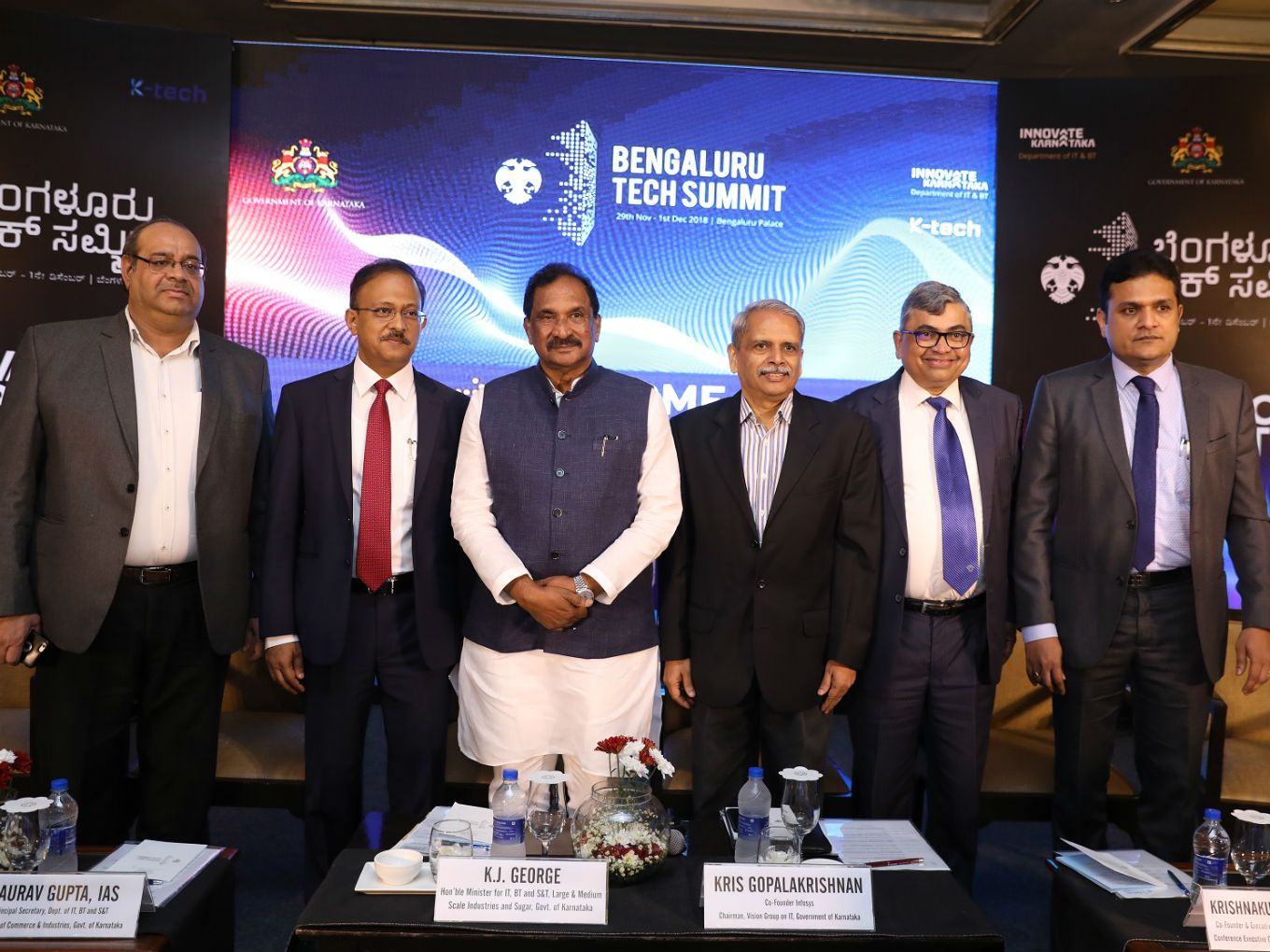 “We have been handholding and soft landing startups, looking at each minute detail,” says Gupta

Almost every Indian state can stake claim to some distinct and unique feature, whether it related to culture, languages, geography, history, or the pace of development. Unarguably, and undoubtedly, Karnataka’s USP is that its capital Bengaluru is India’s IT hub and the Mecca of the Indian startup ecosystem. Right from Biocon founder Kiran Majumdar Shaw, Hari Menon (of BigBasket fame), the Bansals (Sachin and Binny, of Flipkart), to Byju Ravindran (founder of eponymous edtech startup Byju’s), Bengaluru has been a brewing ground for entrepreneurs.

Having started early, Karnataka’s startup ecosystem is at a relatively advanced stage compared to others in the country. Even as other states organise DIPP-backed Startup Yatras to spread awareness about entrepreneurship as a means of employment, Bengaluru is contending with more nuanced startup issues. Of late, startups from the state are either expanding to or relocating abroad. Thus, Bengaluru is not really in competition with other Indian startup hubs like Delhi-NCR, Mumbai, or Hyderabad, but with international ones such as Singapore, Silicon Valley, Tel Aviv, and London. As they say, uneasy rests the head that wears the crown.

But what are the problems plaguing Karnataka’s startup ecosystem? What steps is the state government taking to tackle them? Inc42 recently caught up with Karnataka Commerce & Industries, Information Technology, Biotechnology and Science and Technology ((IT/BT and S&T) principal secretary Gaurav Gupta to learn more about startup-related developments, plans, and initiatives in the state.

Inc42: Lately, the NCR startup ecosystem, riding on a multi-city infrastructure, has been growing faster than Bengaluru. Is Bengaluru losing its top position?

Gaurav Gupta: We have taken a holistic approach towards strengthening the startup ecosystem in Karnataka — right from providing mentorships and coworking spaces to funding at various stages, including angel funding, seed funding, and sector-specific funding. Further, we have gone into specifics such as setting up sector-specific incubators — biotech incubators and other technology business incubators (TBIs) — and mentoring entrepreneurs at various research institutes in Karnataka and abroad. The other hubs pose no challenge.

Inc42: Karnataka has collaborated with a host of countries in this regard. What’s the gameplan?

We have made arrangements for Harvard University professors to teach biotechnology and its industrial applications here. With Australia, we have a medtech collaboration for the Bengaluru-based  Bio Innovation Centre. The Netherlands has joined us as our technology partner for Living Labs and joint projects in healthtech.

So, there are a number of collaborations and initiatives we have taken to ensure the robust startup ecosystem in Karnataka. We can do more as well, depending upon industry demand and interests.

Inc42: Lately, many startups have been shifting their bases abroad. At a time when Bengaluru is struggling with traffic, wastewater, and poor waste management, what’s being done to encourage startups to come up with localised solutions?

Gaurav Gupta: We have launched the Grand Challenges to encourage startups to solve local problems. The issues could be sewage water-related, water conservation, improving the extension of primary health services, early detection of plant diseases, and more. All these challenges have already been held and they’ve reached a certain degree of maturity.

Hundreds of startups and entrepreneurs have participated in the Grand Challenges, in which, we shortlist the top five contenders and then the winner. We are currently working with the shortlisted startups to make their model mature and scalable.

So, things are changing. Some of these startups have even received foreign funding on a sustainable basis. As a startup ecosystem, we have grown and matured and they have become commercially viable.

We had entered into a partnership with France last year and launched our DataCity programme (in collaboration with France-based utility company SUEZ and innovation hub NUMA) just a week ago. The DataCity programme will identify civic issues — for instance, timely garbage collection and other issues — as framed by corporates and citizens. These will then be taken up by startups in France and Bengaluru.

Inc42: Have these initiatives, particularly the Grand Challenges, been able to make a difference?

Gaurav Gupta: It’s been more than a year since we launched the Grand Challenges and we’re quite satisfied with the solutions that startups have brought in the areas of water conservation and wastewater management for negligible costs. On November 25, the Grand Challenge winners even showcased their solutions to minister KJ George (state IT/BT minister) at CMRIT.

I am very confident about the solutions that are being worked out. Beyond the Grand Challenge also, there are a number of startups that are active in rural areas.

Overall, every year, around 2K startups are emerging in or relocating their base to Karnataka. The good thing is that a number of these startups are into agritech, healthech, medtech, and are aimed at solving and making an impact at the local level. The startups are doing well — a number of them have secured seed funding from abroad.

Then there is Elevate, Idea2PoC, Seed Funding, and other state-backed programmes. We are handholding and mentoring them, so we know exactly where they stand.

Inc42: The state government had organised a blockchain conference last year with an aim to adopt the technology in e-governance. What has happened since then?

Gaurav Gupta: In general, our approach has been that the solutions that emerge from startups must be technologically neutral. In the case of blockchain, five use cases — including land registration and others — have been identified by the Karnataka government. The incubation and hand-holding of startups in these areas are in progress.

Karnataka chief minister HD Kumaraswamy recently announced the setting up of a legal framework to protect Intellectual Property (IP). A blockchain-based IP registry will be formed to protect smart ideas for commercialising them.

Gaurav Gupta: At the Bengaluru Tech Summit, we have helped arrange a number of B2B meetings relating to late-stage investments — Series A, Series B, and Series C — in startups. We are working with LetsVenture and a number of VCs such as Inventus Capital. Further, we have tie-ups with the Deshpande Foundation and the IKP Knowledge Park. We have taken a host of measures to ensure not only angel and seed funding, but also to promote late-stage funding.

What we are seeing now is that the real business is happening on a small scale via startups and SMEs, and not at the corporate level. As reported by Inc42, the Bengaluru startups are attracting huge investments too.

We have also been helping startups in B2B connect, market access, valuation, and other stuff. All of this is happening at a slow pace but it is happening.

Inc42: Unlike Maharashtra and NCR, the Karnataka startup ecosystem is concentrated in Bengaluru. What’s being done to spread it across the state?

Gaurav Gupta: We have now set up incubation/innovation centres across the state — at Hubbali, Mysuru, Dharwad, and Udupi. Interestingly, a number of agritech and biotech startups are coming up from these areas of Karnataka.

Inc42: Indian startups face hindrances at the policy level — pending data protection bill, ecommerce, drone, and other policy frameworks. Though these are Centre-related issues, how has your experience been in this regard?

For the last few years, there is more clarity in terms of policies. For instance, the drone industry wasn’t viable a couple of years ago, but, with the drone policy now, there are a number of drone startups that are doing business.

However, there’s always scope for improvement. As we become more mature, better policies will be formulated. But, I can assure you that in the next 10 years, we will have a very robust startup ecosystem.