IPL Media Rights Auction 2022: Inside The Auction That Made IPL The Second-Richest Sports League In The World

With the deals done, IPL has become the second-richest league in the world, second only to the US’ NFL

At the IPL media rights auction 2022, Disney Star and Viacom18 emerged as the highest bidders in their respective packages, taking the Indian Subcontinent’s TV and Digital rights respectively.

The entity, formed after Disney acquired 21st Century Fox, won the rights to broadcast IPL in the Indian subcontinent for INR 23,575 Cr ($3.02 Bn). At the same time, Reliance-owned Viacom18 grabbed the digital rights for the competition with a bid of INR 20,500 Cr ($2.57 Bn). 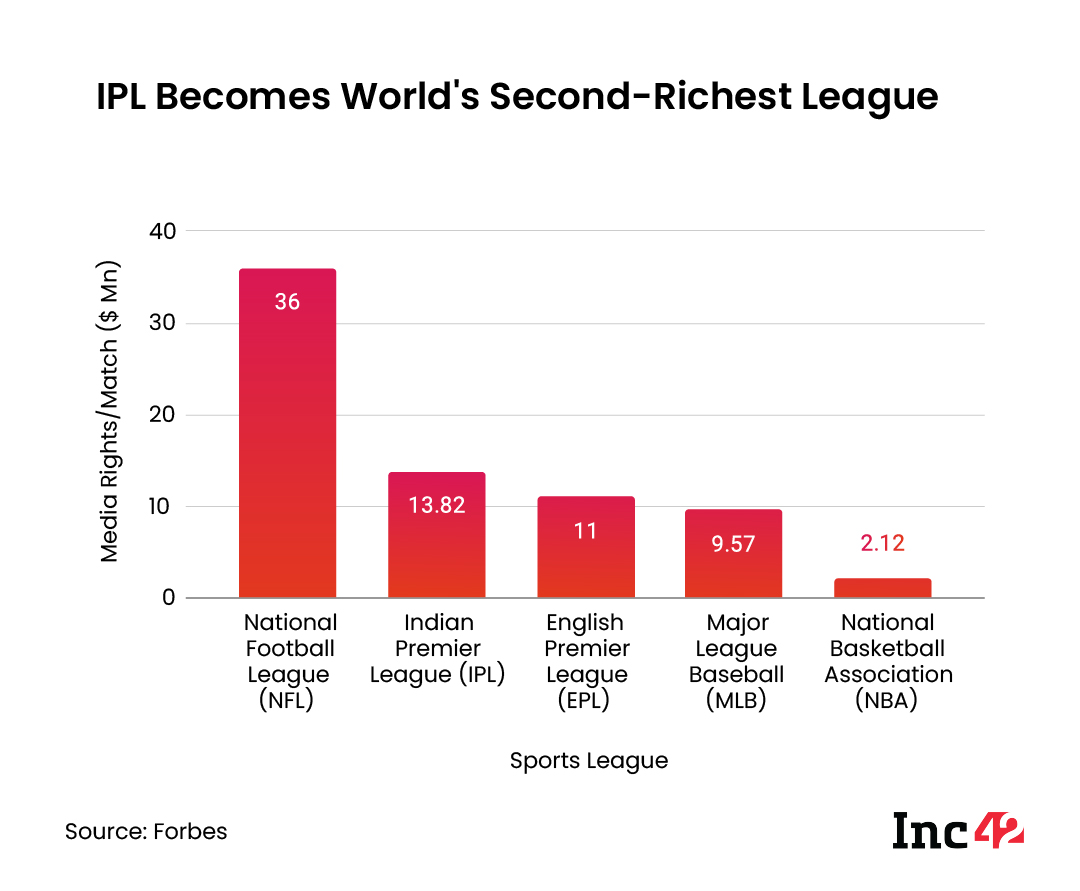 According to Forbes, the US football league National Football League (NFL) tops the list of most lucrative sporting leagues, costing a broadcaster around $36 Mn per match. England’s top-flight of football (soccer, to differentiate from NFL) Premier League sets a broadcaster back around $11 Mn. Major League Baseball costs around the same ($9.2 Mn per match).

A BCCI functionary cited by PTI said that the per match value of IPL, only from the Indian TV and Digital rights, comes out to be around INR 107.5 Cr ($13.82 Mn), second only to NFL.

Packages, Bidding And The Next Five Years Of IPL Broadcasting

Therefore, Package 1 was won by Disney Star, after placing a bid of INR 23,575 Cr. At the same time, Viacom18, with Uday Shankar and James Murdoch’s Lupa Systems, won Package B for INR 20,500 Cr.

The cricket board had set a per match base price for TV at INR 49 Cr, while the same for digital rights was at INR 33 Cr. For overseas rights, the base price is set at INR 3 Cr for both TV and digital rights.

IPL has grown incredibly fast in terms of TV money being generated over the last five years. This could have been one of the reasons why BCCI did not allow composite bids for all the rights from a single media house at the IPL media rights auction 2022. 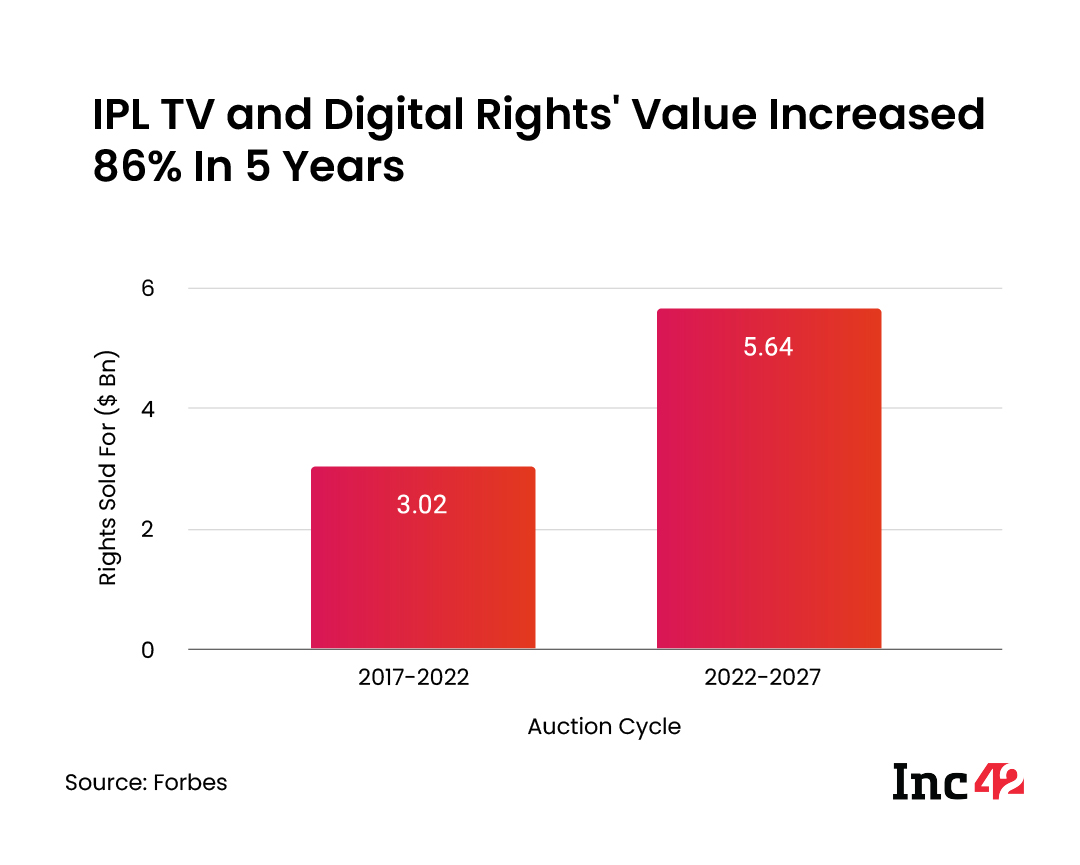 This means, adjusting for inflation, IPL has generated 86.75% more money from TV and digital rights this year for BCCI.

The BCCI has broken up the 410 matches in the Packages A and B as follows:

“We are already reaching towards USD 5.5 billion mark after selling two packages. But digital rights per match value touching INR 50 Cr is massive. An incremental growth of 51 per cent over and above base price is phenomenal,” a BCCI functionary told PTI.

There are only two packages left unsold at the IPL media rights auction 2022. Package C will receive bids on Tuesday. However, a bid of around INR 2,000 Cr has already been placed on the same. Package D, for overseas broadcasting rights, will also be sold off shortly.

Off The Pitch Competition In IPL Media Rights Auction 2022

When the BCCI first announced the IPL media rights auction 2022 in April, it was touted that along with the winners Disney Star and Viacom18, there would be several other participants, looking for a slice of that TV or digital rights deals.

These companies included tech giants such as Amazon and Google parent Alphabet, along with Dream11, veteran broadcasters Sony Pictures Networks India (SPN) and Zee Entertainment Enterprises. However, the BCCI increased the base price for both TV and digital, which resulted in these companies being put off even before the auction began.

What’s more, the BCCI introduced Package C, the non-exclusive digital rights package, which would be for a limited number of matches but far cheaper. That made another reason why these companies stepped away.

Amazon’s reasons were more business-focused, however. The American ecommerce giant has already invested $6 Bn in India, and any more investment did not make sense from a business perspective.

It is interesting to note that Amazon holds many other sports broadcast licences, including the French Ligue 1, the country’s top-flight football league. The ecommerce giant paid $825 Mn for three seasons, or around $7.24 Mn per match, which is about half the IPL’s per match value for the 2022-27 cycle.

Amazon also holds the rights to broadcast European football, which includes the UEFA Champions League, the UEFA Europa League and the UEFA Conference League, in the US. It had recently signed a $1 Bn-a-year deal with UEFA till 2033.

As such, it made monetary sense for Amazon to pull back, which it did. It is likely that the US ecommerce giant will join others to compete for the international broadcast and the Package C, since the two unsold packages are far cheaper than the Indian Subcontinent broadcasting rights.

IPL is one of India’s most famous sporting events in the world, and it routinely attracts tens of millions of viewers per match. The latest figures are yet to be released. However, during the last year’s flagship event, BCCI reported viewership of 380 Mn halfway through the season.

At the same time, there is extensive participation from companies that look to grab the spotlight at the showpiece event. This year’s IPL saw participation from Tata as the title sponsor, along with 29 Indian startups including 10 unicorns.

According to reports, advertisers this year spent almost INR 17 Lakh for a 10-second spot during the matches. Given that each match has around 2,300 seconds of ad inventory, a back-of-the-envelope calculation brings the total to INR 39.1 Cr in advertisement money from a single match.

Of course, the prices would change with the next cycle. However, if we calculate taking the same cost for both digital and TV advertisements, then we arrive at a figure of INR 78.20 Cr per match from advertising alone for Viacom18 and Disney Star.

Circling back, the IPL media rights auction 2022 saw per match value of IPL reach INR 107.5 Cr. Therefore, Disney Star and Viacom18 would be making almost 73% of their total investment back from advertising slots alone.

Cricket is big business in India, and the IPL media rights auction 2022 shows just how big the business can get.