Once convinced that “God is the only truth,” Mahatma Gandhi, “the father of our nation”, as named by freedom fighter Netaji Subhash Chandra Bose, in the course of his experiments with truth, later came to believe that “There is no god higher than truth.”

Gandhi is also quoted to have said: “Truth alone will endure, all the rest will be swept away before the tide of time.”

As India is caught in the crest of its #MeToo wave, the moment of truth and reckoning seems to have arrived for many of those who have exerted their position of power — real or perceived — to sexually assault, abuse, harass, and persecute women. The forms are many — physical, verbal, non-verbal, on chat, on text, the list goes on — but there is only one crime — sexual abuse.

#MeToo started in October 2017 as a hashtag on social media with women sharing incidents of sexual assault and harassment, especially at the workplace. Over the last year, #MeToo has gained many local and international narratives and become a movement against sexual harassment and sexual assault in general.

In India, the #MeToo campaign, triggered in a sense by Tanushree Dutta’s allegations of sexual harassment by veteran actor Nana Patekar, has seen its second resurgence over the last week. Taking the shape of a working woman’s revolution against sexual predators and abusers at the workplace, the movement has so far seen over half a dozen casualties with many more directors, actors, comedians, journalists, authors, and others being named and shamed on social media by hundreds of women.

Men, and sexual criminals, are not limited to the above industries. The #MeToo movement has now spread to the Indian startup ecosystem, which is the third-largest in the world. A number of startups, along with some big corporates, have failed to implement the Vishakha Guidelines (1997) or Sexual Harassment of Women at Workplace (Prevention, Prohibition and Redressal) Act, 2013. As per a survey of 600 enterprises, around 40% didn’t have the Act in place.

Thanks to #MeToo, many of them have had to step down and apologise for their misconduct and crimes.

In February, not one or two but five women made sexual harassment complaints against investor Mahesh Murthy; however, Murthy was given anticipatory bail within a few hours of his arrest.

Last year, on March 14, more than nine women accused TVF founder Arunabh Kumar of sexual harassment. However, the startup founder remained unaffected and unfazed, even going so far as to say: “I am a heterosexual, single man and when I find a woman sexy, I tell her she’s sexy — but this is only done in my personal capacity. I compliment women in my personal space and not at the workplace. Is that wrong? Is every man, whose compliment a woman doesn’t like, a molester.”

On October 5 this year, the #MeToo movement finally saw it coming to India.

Three women — Mahima Kukreja, Sandhya Menon and Anubhuyan — took their angst to Twitter, sharing DMs (direct messages) from a comic named Utsav Chakraborty who used to work for content startup AIB and their other colleagues from different companies under the #MeToo campaign.

Meanwhile, Kukreja claimed that she had also written to two AIB founders, including Tanmay Bhat, who too accepted the fact that he was aware of the complaint. Now, in a fresh statement issued by AIB, Vidhi Jotwani, head of human resources at the company, has stated that Tanmay Bhat, co-founder and CEO of AIB, is stepping away from the company and will not be involved in the functioning of AIB in any manner. Another AIB co-founder, Gursimran Khamba, has also been sent on leave. Further, Hotstar has now cancelled the scheduled production of On Air With AIB Season with immediate effect.

The power of #MeToo unleashed itself over the last couple of days as more women joined the campaign and the heads of more than half a dozen male bosses in different professions rolled. We’re sure many more will fall in the near future.

Journalist Prashant Jha has stepped down as Hindustan Times political editor and bureau chief after facing several sexual harassment accusations under #MeToo; Vikas Bahl, director of Queen, a movie that celebrates ‘feminism’,  has been removed from an Amazon web series which Bahl was set to direct after an ex-colleague accused him of sexually harassing her.

Actress Kangana Ranaut too, supported her claims. “But still every time we met, socially greeted and hugged each other, he’d bury his face in my neck, hold me really tight and breathe in the smell of my hair. It took me a great amount of strength and effort to pull myself out of his embrace. He’d say ‘I love how you smell K’. I could tell something is wrong with him,” Ranaut was cited as saying. Bahl’s production company, co-founded by film director Anurag Kashyap, has also been dissolved.

According to Dhanya Rajendran, journalist, co-founder and editor-in-chief of The News Minute, Times of India’s Hyderabad-based resident editor KR Sreenivas has now been asked to go on administrative leave pending an inquiry. So far, seven women have accused him of sexually harassing them and others.

Ajay Chaturvedi, founder of HarVa a rural BPO company, author, and WEF-Young Global Leader; Abhishek Agarwal, entrepreneur @BoldKiln and former partner operator of a VC; entrepreneur Sajan Raj Kurup, founder of Creative Land Asia, and many other startup founders as well as investors have also been accused of sexual abuse and harassment.

In the latest #MeToo allegation, Vinta Nanda, a writer-director-producer and founder of the Asian Centre for Entertainment Education, accused veteran actor Alok Nath Vinta of rape and violation in a harrowing account on Facebook. Nanda wrote in her post, “Irony is that the man, the predator in question here is the actor par excellence who is known as the most #Sanskaari (cultured) person in the film and television industry.”

#MeToo Movement: How It Started

The Me Too Movement has been around for over 10 years now, since before it became a hashtag. It was launched in 2006 by Tarana Burke, an activist from Harlem, to help underprivileged women of colour affected by sexual abuse.

Since then, it has been appropriated, and rightly so, by thousands of women the world over. It was launched online in 2017 by Hollywood actress and singer Alyssa Milano, who used #MeToo in a tweet, appealing people to join the movement if they’ve ever been sexually abused.

Alyssa Milano tweeted, “If you’ve been sexually harassed or assaulted, write ‘me too’ as a reply to this tweet.” 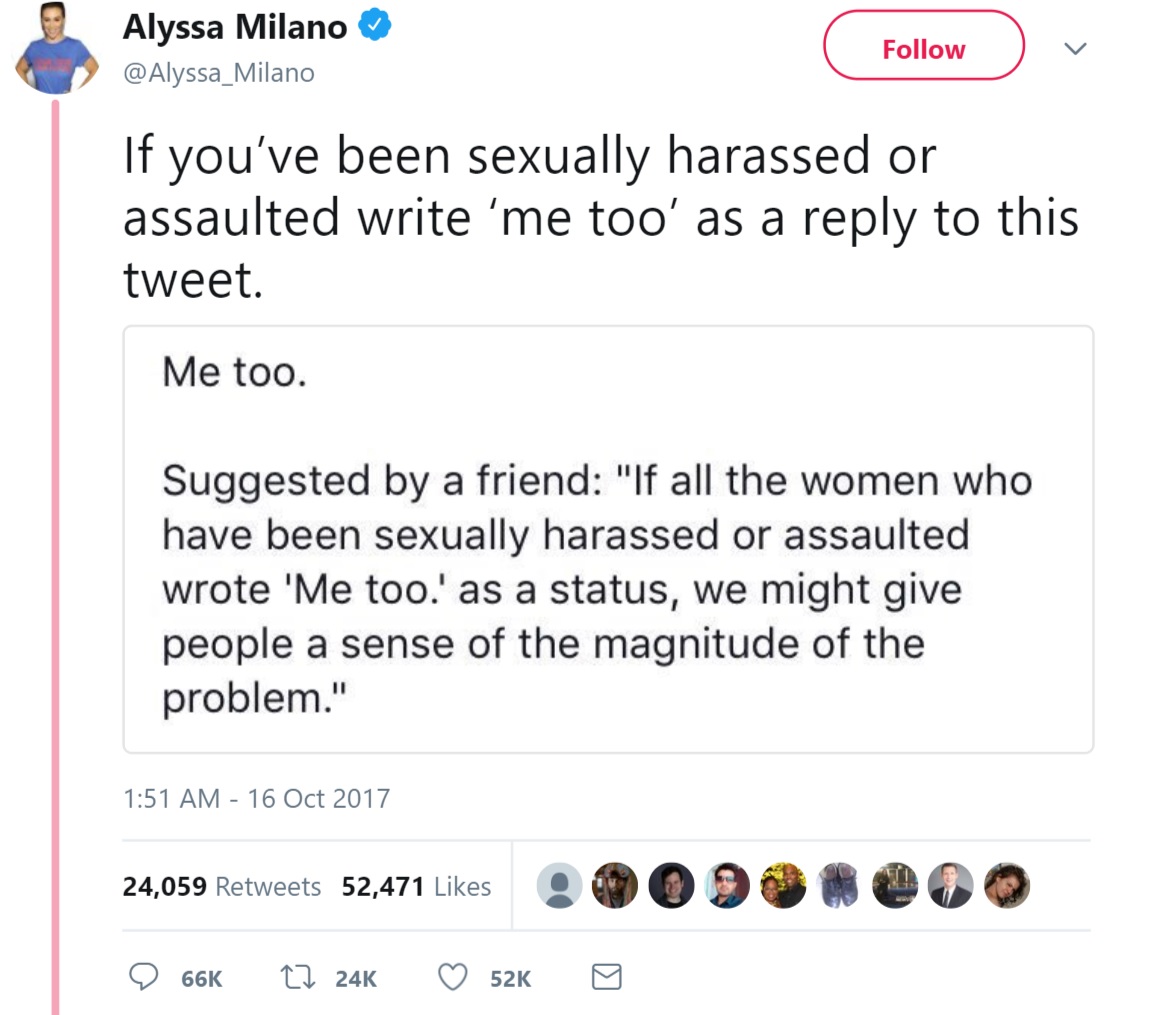 The tweet, resulted in thousands of women tweeting #MeToo in reply to Milano’s call. Joined by the likes of celebrities Ashley Judd, Jennifer Lawrence, and Uma Thurman, the campaign soon became so big that The Time magazine featured it in its Personality of The Year 2017 with the headline ‘The Silence Breakers’!

The Flipside of The Indian #MeToo Campaign

While the #MeToo campaign has served as a trigger for women in India to break the silence and come together in a collective online movement on Twitter and FaceBook against sexual abuse, there is a bit of a problem with the way the accused are being named and shamed. Unlike the global campaign, there is hardly any effort being made to verify and validate the allegations. In the last four days, more than 100 people have been named and shamed in the #MeToo movement.

However, there are reportedly some false allegations being made under the garb of #MeToo and some of the accused say they are ready to face legal investigation. For instance, The Wire co-founder Siddharth Bhatia said that the allegations made against him by a couple of women — Reema Sanyal and Bharti Shukla whom he could not even recall — are baseless and that he is open to a further probe into the matter.

Here, it is also worth noting that some of the names that have popped up —  including Bhatia’s — haven’t been backed or verified by others reporting similar incidents of abuse or misconduct.

This is very different from the way #MeToo panned out in the US and the UK. In the US, the allegations followed investigations too, by relevant agencies and, more importantly, by the media, through investigative journalism.

After many women, including Fox News anchor Megyn Kelly, levelled sexual abuse charges on Roger Ailes, the former chairman and CEO of Fox News and Fox Television Stations who died last year, Kelly went on to accuse US President Donald Trump as well. Kelly, in her book, Settle For More revealed the misogynistic mindset of Trump and his team. While Trump’s comment about Kelly is in the public domain, Kelly, in her book, quoted Trump’s attorney Michael Cohen’s retweet about her, “We can gut her.”

Along with Megyn Kelly, around 10 other Fox women employees had accused Ailes of sexual harassments.

In ‘The Investigative Story Of The Year which won the Pulitzer Prize 2017, Ronan Farrow from New Yorker, and Megan Twohey and Jodi Kantor from the New York Times exposed the sexual crimes of one of Hollywood’s most powerful, ‘award-winning’ producers — Harvey Weinstein.

The story was then seconded by another investigative report by USA Today and soon more than 100 women came under #MeToo accusing Weinstein of sexually harassing them.

However, in India, while the #MeToo fight is being given a spin-off in terms of narration, the mainstream media, which is expected to pursue the cases taking cues from Twitter, have actually restricted themselves to reportage with no follow-up investigations. Law enforcement agencies haven’t taken cognisance of the large-scale allegations either or initiated any investigations into the cases.

If the #MeToo campaign needs to go beyond being a social media outpouring and a public naming-and-shaming exercise, these allegations, which point towards the extent of unreported sexual abuse in India, demand immediate investigation and punishment for the accused.

In India, cases of sexual abuse are often lost in court hearings if the media doesn’t do its due.