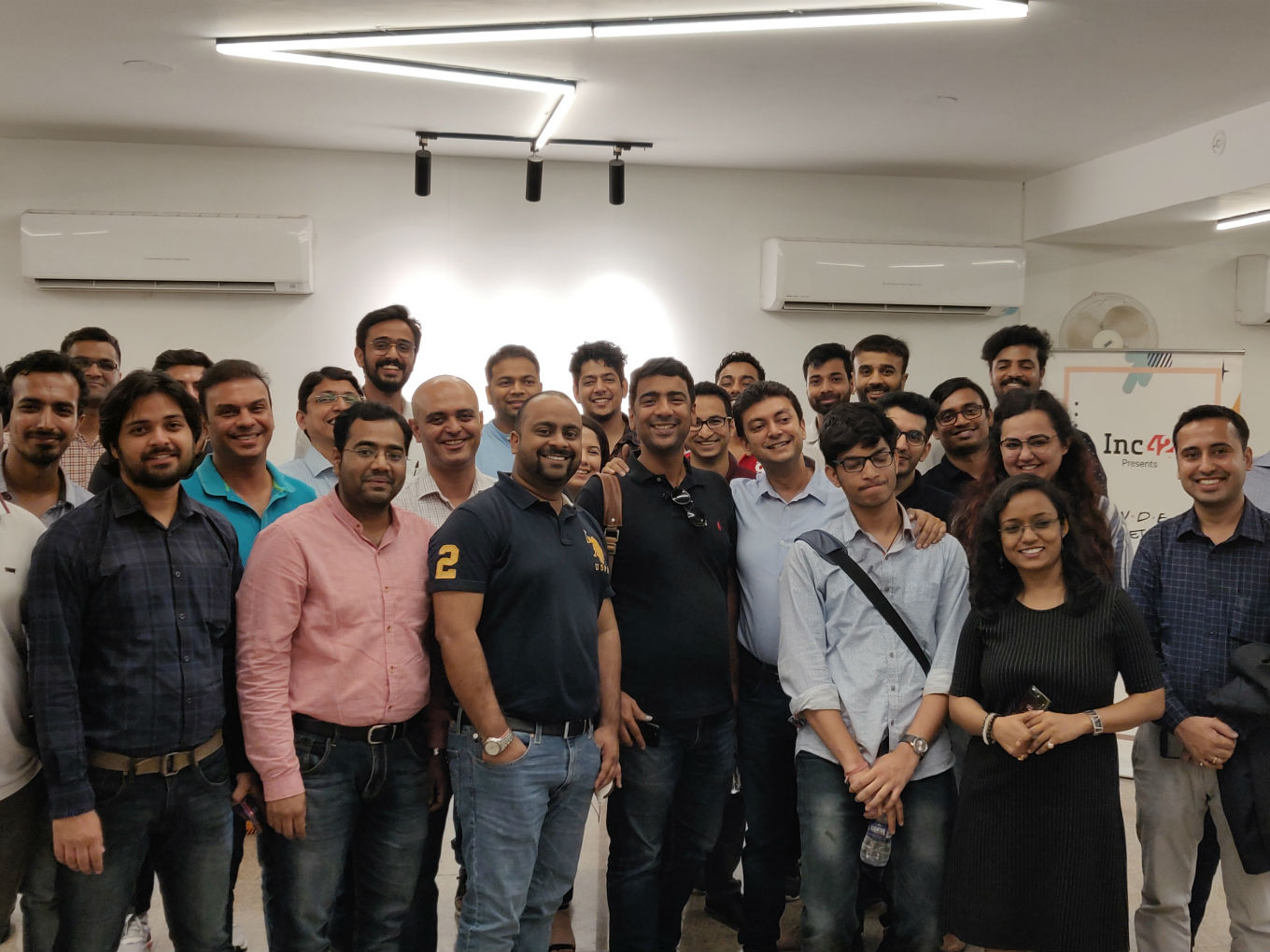 The F.O.U.N.D.E.R.S. Meetup is a series of get-togethers for entrepreneurs held at the Inc42 HQ

I will never take two leaps of faith at once — Nitin Saluja, founder and CEO of Chaayos

Nitin Saluja talked all about taking a leap of faith, learning from Tata Cha, showing the importance of ESOPs, retaining employees and so much more last night (August 8) at Inc42 head office. The Chaayos CEO was interacting with a group of 30 early stage founders who made it here in the middle of a busy week to learn from Saluja and connect with the budding entrepreneurs of the ecosystem in Delhi.

The occasion was eighth edition of its Inc42 F.O.U.N.D.E.R.S. Meetup in Delhi where founders from stealth, early stage and growth stage startups come in to talk about their individual challenges, the way they overcame them and share what they are hoping to achieve.

The F.O.U.N.D.E.R.S. Meetup is a bimonthly event hosted by Inc42 to bring together startup founders and stakeholders from the Indian startup ecosystem on one floor for a fun evening. The primary objective of the meetup is to introduce founders to other entrepreneurs because supporting each other for the growth is one of the fundamentals of Indian startup ecosystem.

As the founders engage, understand and guide each other in their entrepreneurial journey, there is so much more for them to build on — friendships, partnerships and maybe even new ventures. The eighth edition of F.O.U.N.D.E.R.S meetup was sponsored by Amazon Web Services (AWS) and NetApp, while CoWrks and Qdesk were the community partners.

At yesterday’s  F.O.U.N.D.E.R.S. Meetup, Saluja talked about his adventure of starting up tea business in India, what worked and more importantly, didn’t work for the company’s growth.

Going from a consultant to an entrepreneur, Saluja said that a big part of the journey is doing whatever it takes. For him it meant opening the shutters of his store at 8 am, and closing late at 11 pm, as that is what his business needed.

Started in 2012, Chaayos is a tea-brand and Saluja with his team believes that there is a cup of tea for everyone. From one store in Cyber City, Gurugram to over 52 stores, Chaayos has been working towards being synonymous with chai across the country.

With the benefit of hindsight, as Saluja puts it, he has a lot more ideas on what worked and what didn’t.

His initial investors include Tiger Global and Saluja had an interesting story to share here. Lee Fixel, ex-partner at Tiger Global, had heard of Chaayos at the Flipkart office and asked Bhavish Agarwal, cofounder of Ola, to introduce him to Chaayos team and in an hour after a call with Saluja, he was all set to offer them a term sheet.

However, on the backend, Fixel asked for a report by Accenture on tea industry, which kind of concluded that Chaayos was the worst step in India. This didn’t stop Fixel from investing in Chaayos, as Fixel knew what chai meant for India.

One of the other interesting lessons Saluja shared is that the company has attracted investments based on its performance numbers and then what he tells about vision and plan supports that. Therefore, an entrepreneur should let his numbers speak before his explanations infront of investors.

Some of the marketing strategies which worked for Chaayos include ensuring brand visibility in the store, focusing on what works well with chai instead of adding popular products, introducing new beverages with every season, etc.

In terms of retention while starting up as well as when settled successfully, Saluja said that money can’t stop an employee. He also stressed on ensuring that employees understand the importance of ESOPs and how it helps the company as well as employee.

He also stressed on the importance of over communication i.e. keeping the team informed of the company’s plans, despite it working out in the long run or not. He said that he gives himself the benefit of taking U-turn on things he plans because it may go well or not and it should not be hidden.

The incredible journey of Chaayos in Saluja’s words had several lessons and Do’s and Don’ts for entrepreneurs in attendance. If you were not here this time, ensure you stay updated with several events lined up by Inc42. We have a lot more planned to help you figure out your way through the intricacies of the Indian startup ecosystem.