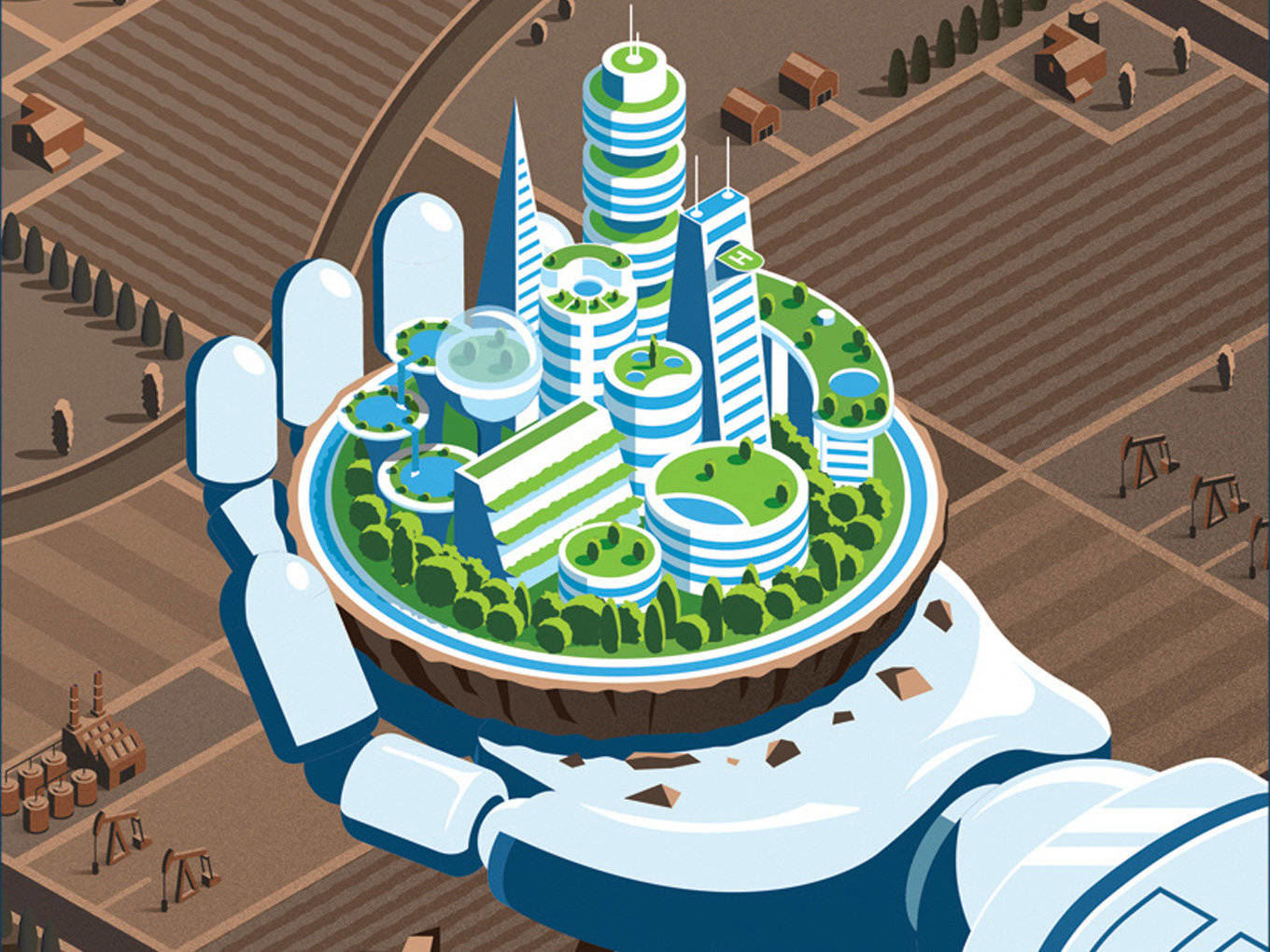 From security to egovernance, startups are solving a range of challenges around government services

Whether it’s roti, kapda aur makaan or sadak, bijli aur paani, the election manifestos in India haven’t had the kind of seachange that the country has had in other sectors like science and sports. ISRO’s missions might have taken us close to the moon and Mars, and India’s Sundar Pichai may have become the CEO of Alphabet, but the country’s civic and social issues are as bad or even worse as it was in the last century. For many startups, solving the basic problems of food, housing, roads, water and power is still the big goal. Thankfully, technology and civictech startups are stepping in to change the ground reality.

This is where civictech startups are slowly gaining a foothold. Civictech startups basically work at the intersection between technology, government, and citizens. India, which is one of the rapidly growing startup hubs in the world, offers plenty of white space where new-age innovators are driving significant disruption at scale. India’s civic tech startups are rising to the occasion and leveraging cutting-edge tools, artificial intelligence, machine learning and other emerging technologies to bridge the gap between government services and their effective execution.

One of the biggest factors in civictech is the passion of the entrepreneurs in solving major on-ground issues. After all, they are looking to solve major challenges such as water conservation and purification, waste management and sewage and sanitation, civic security and crime-fighting.

According to a report by CIIE.CO, VillageCapital and Omidyar Network India, there are 450 to 475 civic tech startups in India today. The report defines the role of civic tech startups as businesses that provide “technologies that empower citizens to engage and participate in governance and better access government services as well as those that enable governments to become more accessible, efficient and effective in delivering services to citizens.”

It also defines two ways in which civictech startups in India can function.

Streamline The Work of Local and National Government:

This includes providing front-end technology that increases the quality, efficiency, and accessibility of services provided to the public, around areas such as transportation, water and sanitation, and waste management.

Additionally, startups are also providing back-end technology infrastructure, software tools and hardware that help the government collect, organise and make decisions based on data in order to engage more proactively with citizens and deliver civic services more effectively, accessibly and transparently. This sub-segment is often referred to as govtech.

Then there is citizen-to-citizen engagement and communication, where startups connect citizens with each other in order to discuss, organise or fund civic projects through community-based platforms.

The success of trailblazing startups in the field of AI/ML, image recognition, voice analysis and more has led to government authorities seeing the potential.

“The rise of the entrepreneurial ecosystem has led to several nation-wide overhauls. The government has been launching campaigns like Digital India and others to foster the same innovations. It was only a matter of time before doors were opened for startups to enter several mission-critical civic functions and disrupt the status quo,” Atul Rai, CEO and cofounder of Staqu told Inc42.

The Gurugram-based startup has forayed into assisting police forces with the launch of an AI-powered app ABHED. The app helps the task forces to digitise criminal records and retrieve this information in real-time through image, text, or speech-based search. Staqu has partnered with state-level police departments in Rajasthan, Uttarakhand, Punjab, and Uttar Pradesh for a surveillance system within prisons.

“We have launched a smart glass solution for the task forces, which when integrated with an AI-software allows law enforcement personnel to scan through crowds of people and locate the criminals camouflaging between the large groups,” Rai added.

At present, Staqu has a database of over 1.5 Mn criminals in India and have helped the police forces catch 2,100 criminals. Other innovations in the pipeline are gait analysis, which takes the real-time footage and identify criminals through their mannerisms, the way they walk and more, as well as hotspot and geo-fencing analysis that scans through the historical data and nearby places from a crime scene to generate leads for the police forces.

Recently, it also launched a video analytics platform, JARVIS in Uttar Pradesh, which is a video wall that covers CCTV footage from all of 71 prisons in the state, covering a stretch of 900KM.

Nepra is an Ahmedabad-based waste aggregation and processing company that operates under the ‘Let’s Recycle’ brand. The startup has built a dry waste supply chain which includes homes and other generators to recyclers. The startup, which raised INR 44 Cr Series B round funding in 2018, leverages advanced tech to process waste. Delhi-based Karma Recycling and Bengaluru-based Saahas Zero Waste are other startups working in the same field.

Government authorities are increasingly seeing the merits of tech integration to boost the effectiveness of various bureaucratic processes. Several state governments, especially those of Maharashtra, Andhra Pradesh and Telangana, are showing progressive sentiments by proactively participating and enabling the ecosystem through competitions or partnerships.

The immense potential of civic tech has been drawing investor interest as well.

“We are committed to supporting startups working in niche sectors with a disruptive vision accompanied by an iron-clad determination,” said Digvijay Singh, COO of Indian Angel Network.

“Since a majority of innovators leverage the power of AI and allied technologies, they are well-equipped to tap the remarkable potential of the global AI market which is estimated to be worth $16.06 Bn by 2022. The prospects, in short, are extremely optimistic,” added Singh.

According to the CIIE.CO report, more than $100 Mn investment has been poured into civictech in India by organisations aimed to improve the delivery of services to citizens.

Take, for instance, Goa-based Transerve. The company executes projects to streamline the revenue generated from property tax by using technology in four cities in Uttar Pradesh.

Transerve has developed GIS and machine learning-based stack called Transerve Online Stack which is designed for Indian cities with complex setup. The solution is scalable and can remodel cities in digital form based on as things are on-ground, which helps in running scenarios to assist decision-makers in finding the impact of their policies and projects. The startup has received $1.6 Mn funding till now.

“Our journey started with Panaji in Goa where it was easy to carry out PoCs, since it is a small state and the company was being bootstrapped in the beginning. Since then we have scaled the product and operations to three geographies including Delhi, Bhubaneswar and Panaji,” Ashwani Rawat, cofounder and director of Transerve, told us.

NextDrop, founded in 2009 by Anu Sridharan, Devin Miller, Nishesh Mehta, Quijano Flores, Thejo KoteWe inform consumers when to expect water supply, if there is any delays, and most importantly, if there is a cancellation, so consumers can plan appropriately and not spend time waiting for water.

The startup pairs data from devices, with inputs from the consumers, to show which areas are receiving sufficient water quantity and which are not. “We use this data to make recommendations to the utility on how to manage supply for more equal distribution,” it says.

Can India Expect A Civic Revolution Like The US?

While India’s thriving startup ecosystem has surprised the world, multiple challenges inhibit the civic tech sector from unlocking its full potential. The chief one is that of promoting the adoption of innovations among the government authorities. Then, besides the initial scepticism, there is also the matter of the feasibility of the entire project as large-scale tech integration necessitates paradigm shifts across all levels.

The biggest challenge faced by these startups is to convince the government authorities about the feasibility of the idea.

“Since tech adoption warrants significant paradigm shifts, sometimes we must allow ourselves to imagine a world that hasn’t existed before. Given the nature of their job and huge responsibility on their shoulders, government officials were sceptical initially, and understandably so,” said Rai.

Additionally, there is no single policy when it comes to collaborations between government and startups and the protocols would keep shifting as per different use-case. However, the intent of the government to safeguard data privacy is clear and continues to be at the heart of several policies. The focus is on integrated command and control centres in cities.

Though urban municipal bodies in India are aware of the need for tech solutions, they are still not very receptive in many cases. “We still face the challenge in pushing the product at the state level and within urban development departments,” said Transerve’s Rawat.

The Government Factor: Hurdle Or Helper?

The delays with the payment cycle can also be disheartening for the startups, as it involves extensive documentation. Startups aspiring to enter this space must adhere to the deliverables and stick to the ETAs or suffer from fewer contracts coming their way.

“Timely payment by governments is a big issue. We have not been paid by many bodies for more than two years despite finishing the project,” Rawat told Inc42.

“It would be a big deterrent in the success of startups in this space as well as for the urban economy. Governments are not bothered at all when it comes to releasing the payments on time,” he added.

Another key challenge pertains to regulatory compliance itself. Not only do entrepreneurs face headwinds under the current request for proposal (RFP) process due to their inability to fulfil the rigid criteria, those that do procure governmental partnerships struggle with inordinately long payment cycles.

Some also feel that funding is currently available only to smart cities and so-called Amrut Cities with limited focus on pressing issues of urbanisation. The technology exposure at the town or city level is still a challenge and solutions need to be pitched at the state or central level.

While the government is slowly realising the potential of startups in solving India’s civic problems, focus still seems to be on the big system integrators who are offered businesses for smart city projects.

“Government needs to focus on one problem at a time at the state or ULB level and can invite tech companies to solve them to present the model case for the entire country,” added Rawat.

The last decade has seen the civic tech sector and startups in the US grow into a billion-dollar industry. India too has the potential provided both the public and private stakeholders work together to create an environment conducive to innovation in this sector. And there’s definitely a greater opportunity for innovation to make a difference, given the huge gap in what India is capable of, what the government has promised citizens and what needs to be done to fulfil these promises, when it comes to the biggest civic issues in India.