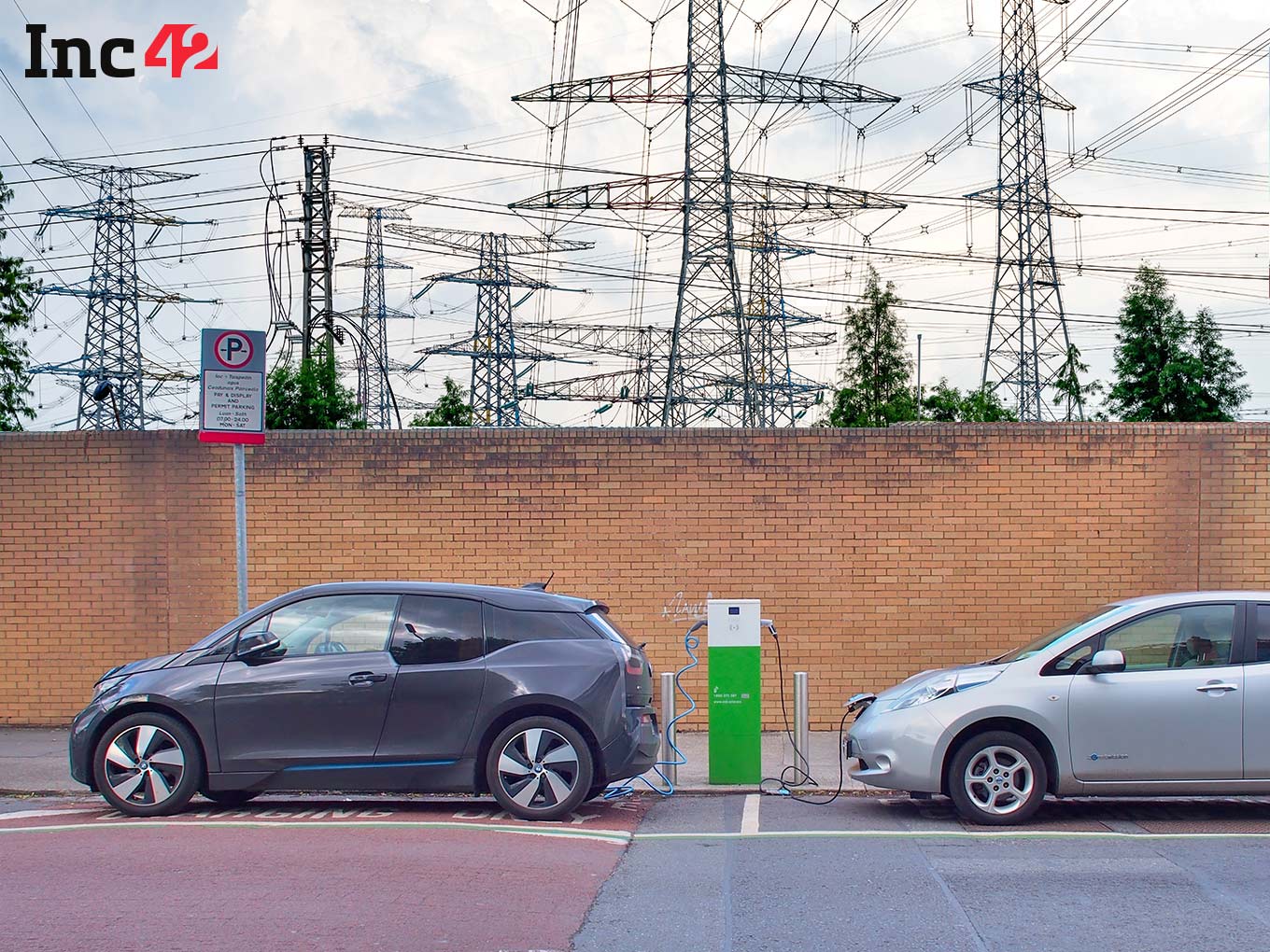 Currently, consumers have to either utilise less electricity during peak hours or pay more for usage

Ever wondered what impact electric vehicles will have on the demand for electricity in India? With the electrification of mobility happening at a rapid pace across the country, many industry experts believe that the domestic market is set to expand to a whole new level over the next 1-2 years.

But is India prepared for electric vehicles? Will India be able to manage the grid capacity for the EV ecosystem or will its consumers have energy anxiety, given that electric vehicles are to a great extent already synonymous with the range and charge anxiety in the country?

According to NITI Aayog’s energy policy report, India’s demand for energy is expected to double by 2040, and that for electricity to potentially triple as a result of increased ownership of appliances.

As India gears up to attain 30% market penetration of electric vehicles by 2030, the sales reach for this segment is expected to touch 43 Mn and the stock to grow to more than 250 Mn. The demand for electricity to power EVs is projected to increase to almost 640 TWh by 2030, according to the new policy,  and 1,110 TWh in order to meet the [email protected] goal.

According to a Brookings Institution India report, electric vehicles will account for the most significant load capacity in the country, higher compared to industries such as steel. Total electricity demand for EVs may vary between 37 and 97 TWh under 33 per cent and 100 per cent penetration of EVs in sales by 2030, assuming passenger travel only between cities, according to the report.

Rahul Tongia, researcher of technology for sustainable development at Brookings Institute India, told Inc42 that EVs constitute a share of less than 4% under all scenarios of aggregate end-use demand projected in 2030. “It is therefore clear that meeting the energy demand under the ambitious target should not be a challenge for the Indian electricity sector,” he added. 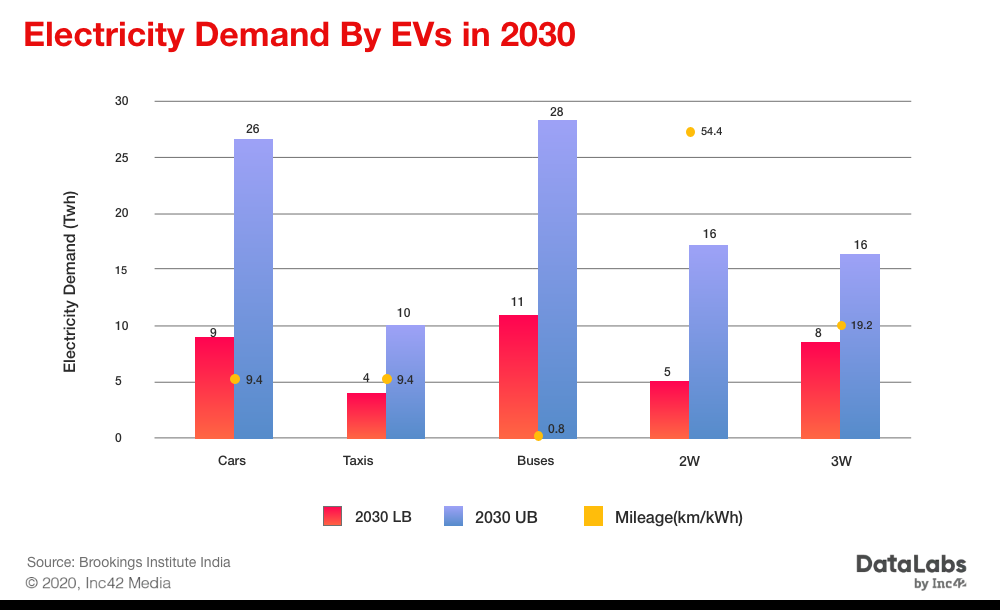 According to DataLabs by Inc42 research, India is projected to require about 100 TWh of electricity about 5% of total electricity by 2030 given that 80% of the country’s population adopts electric vehicles.

Assuming that India will have 1-2 lakh electric vehicles by 2030, only 1% to 2% of the total supply will be required to power them.

For instance, electric two-wheelers are powered by 10K EV chargers on 20 kWh of electricity. Practically speaking, in the case of overloading, electricity consumption by these vehicles may rise by up to 10%. But how will electricity suppliers meet excess demand in such a situation?

There is a need to put in place demand-side management (DSM) or time of use (ToU) activities for such situations, explained Nalwaya. DSM programmes involve planning, implementation and monitoring activities of electric utilities that are designed to encourage consumers to modify their degree and pattern of electricity consumption.

“When there is a peak, then the consumer has to either utilise less electricity or has to pay more,” said Nalwaya.

For instance, if a consumer is charging an electric vehicle from 3 AM to 5 AM, theoretically, the peak is -40%. On the other hand, if charging is carried out from  3 PM to 5 PM, the peak consumption is +40%. Today, most countries including the US and the UK follow a similar model to ensure there is no overloading or surge in power consumption at any given hour.

From the perspective of electric vehicles users, consumers using a fast charger during peak hours will have to bear double the cost.

The Need Of The Hour: Electric Vehicle Infrastructure

According to several charging stations manufacturers that Inc42 spoke to, the industry is still in a nascent stage and the government needs to focus on the availability of power to bring it in par with the actual load requirement. The authorities should also keep the cost in check in terms of localisation of chargers, considering that infrastructure plays a pivotal role in pushing electric vehicle adoption in the country as well as allaying concerns about range among new consumers.

Varun Chaturvedi, founder and CEO of charging solutions provider Tvesas Electric Solutions (Volttic), said that the distribution companies need to provide electricity connections at a faster rate and reduce installation charges. Volttic has set up more than 55 electric vehicle charging stations across India, and by 2025, the company plans to set up take the number to 600+ starting with major cities.

According to Maxson Lewis, cofounder and managing director of integrated EV charging solutions provider Magenta Power, India’s challenges are quite different compared to international markets. Moreover, the electricity supply is not consistent across the country and keeps fluctuating in many regions.

A Localised Solution For EVs

Magenta, one of the early private sector entrants in the electric vehicle charging infrastructure landscape, has joined hands with state-run oil marketer Hindustan Petroleum Corporation to develop a solution to convert street lamps into electric vehicle chargers. Instead of getting the car parked next to a charging station, charging stations are being brought to the location of the car, said Lewis. The product is specially designed keeping in mind the requirement of the Indian market, he added. 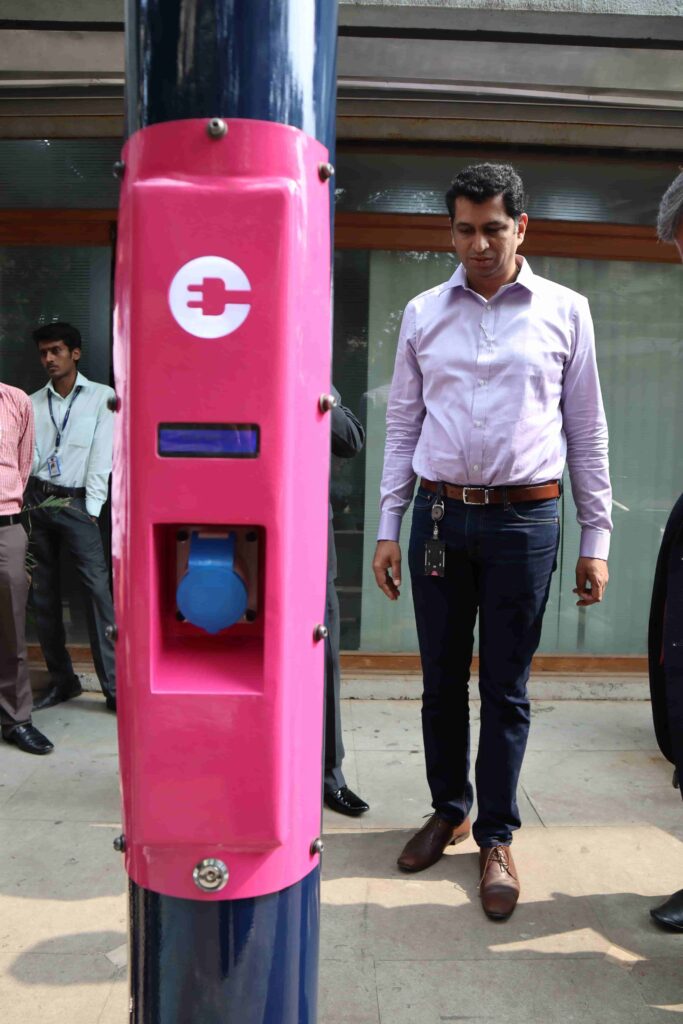 The company claims that its ChargeGrid Flare product will help in building a dense and convenient EV charging infrastructure at low cost, with less clutter to the existing city landscape.

“The quality of power supply from the distribution utility is maintained throughout,” told  BSES Rajdhani Power’s Nalwaya.

In places like Delhi, high-quality electricity is supplied to the grid, which is almost close to 99.99% (plus or minus 3%), he said. It is only in rural areas where the quality of electricity may not be maintained due to lack of infrastructure or loading issues, he asserted.

“It becomes imperative for electric vehicle infrastructure players to come up with some kind of technology or solutions that takes care of the fluctuations in pin power supply because it is the same electricity provided to all the consumers,” Nalwaya added.

Today, power supply has become consistent, with lesser and lesser need for consumers to rely on stabilisers and inverters. Most electronic devices today have built-in features to protect themselves against power cut-off or fluctuation. Power quality is no longer a question, but reliability is, especially from an infrastructure perspective.

All electric vehicle infrastructure players part of the ecosystem need to work alongside electricity service providers to ensure efficiency and optimisation of power.

“If somebody plans for six months and comes to us, we will take another six months to approve the plan,” quipped Nalwaya.

He urged EV charging service providers to approach electricity providers from the first day itself. This will ensure ample time for power suppliers to plan taking into account factors such as locations and power availability, and in turn, help charging solutions providers strategically place their stations, he elaborated. Otherwise,  the augmentation of a plan takes a lot of time, for carrying out a range of tasks right from laying cables and to getting clearance for road-cutting, he explained.

The Future Of Solar Power Generation

Many industry experts believe that the demand for rooftop solar charging stations is expected to pick up in the near future with the increase in the number of electric vehicles. Solar energy can serve as an alternative source of power, and utilised to address excess demand for electricity.

The Indian government is pushing power generation through renewable sources and has come up with a  rooftop solar policy. According to an analysis by the International Energy Agency (IEA), India’s investment in solar photovoltaic (PV) solutions was greater compared to fossil fuels for the generation of electricity in 2018. This was possible due to large-scale auctions, which contributed to faster renewable energy development at rapidly decreasing prices.

In 2019, India recorded a power generation capacity of 366 GW, which included  84 GW of grid-connected renewable electricity. The Indian government aims to produce 450 GW of electricity from renewable energy sources by 2030.

With the prices of battery and PV solar cells coming down, the generation of electricity from solar alternatives has emerged an ideal option for the near future. Most importantly, the consumption of electricity by EV charging stations needs to be self-sustained in order to ensure optimum utilisation of solar energy-based electricity.

Ultimately, the consumer will have to pay the price of switching to electric mobility solutions. It is often assumed that the government and energy suppliers need to focus more on strengthening the network of electric vehicle infrastructure such as charging stations and transformers across regions. However, the share of that cost poised to be passed on to the end-consumer is often understated, irrespective of whether the user actually uses public charging stations.

Moreover, the availability of space remains a massive challenge. “Setting up a transformer is not an easy task anymore. If you look at places like Delhi and Jaipur, finding space is really an issue,” said BSES Rajdhani’s Nalwaya. The only way forward, he said, is to optimise the infrastructure along with DSM activities.