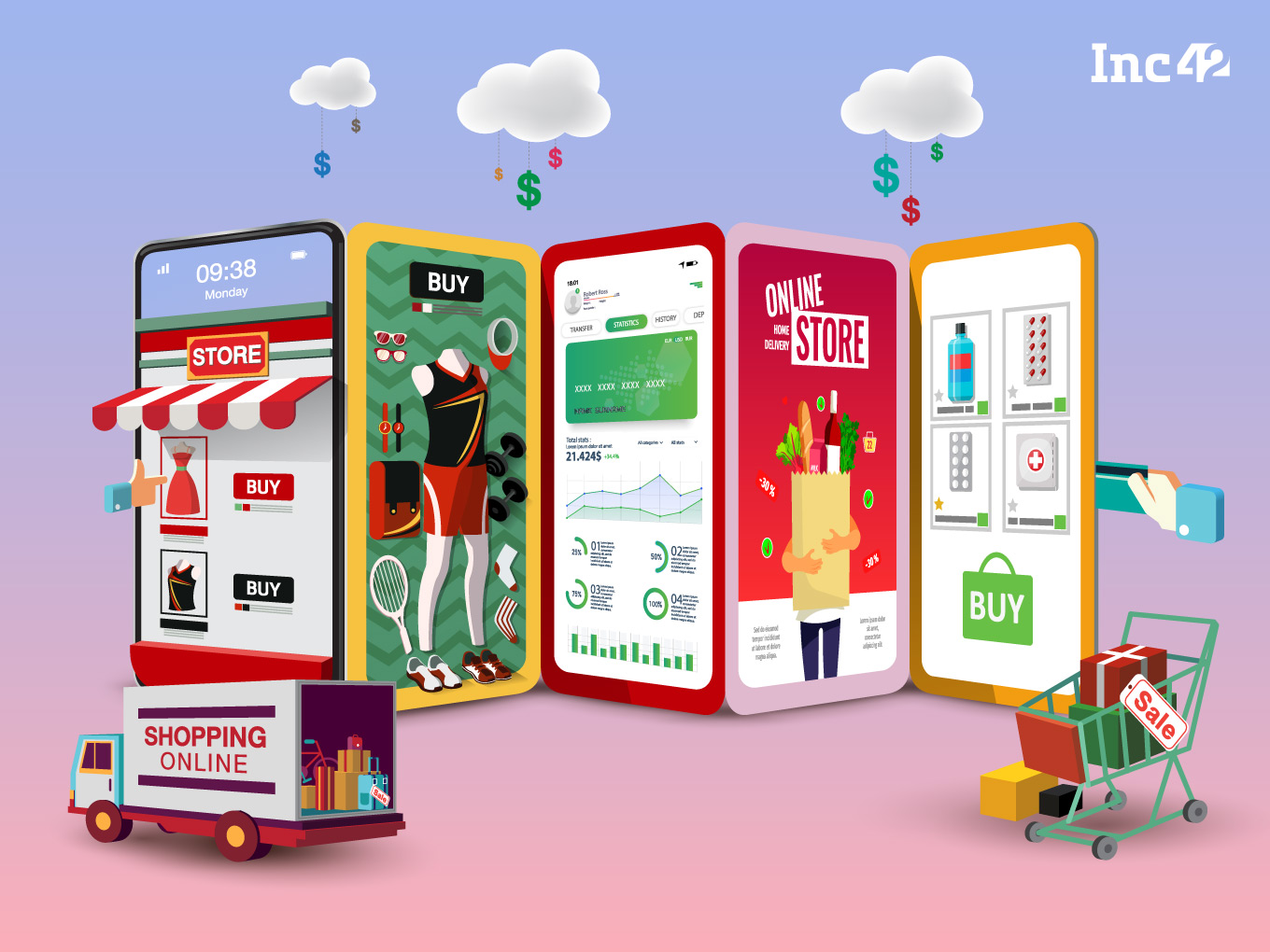 Helped by large-scale adoption of ecommerce due to the Covid-19 pandemic, companies in this space are looking to raise funds to fuel the next phase of expansion

If Zomato and Swiggy are a few notable unicorns in the consumer services space, B2B dukantech startups like Dukaan, OkShop, Digital Showroom are jostling for traction in this segment

From the U.S. tech giants like Amazon and Flipkart owner Walmart to Indian conglomerates like Reliance Jio and the Tata group, every business worth its salt wants a slice of India’s $500 Bn grocery market, growing at a 60% rate annually. Not surprisingly, a somewhat staid grocery segment is now a hotbed of activity even within the startup ecosystem. If Zomato and Swiggy are notable startups in the consumer services space, B2B startups like Dukaan, OkShop, DotPe’s Digital Showroom are jostling for traction in the dukantech segment and also focussing a lot on offline grocery stores.

But first things first. This specific group of players are not online grocery platforms (à la BigBasket or Amazon Pantry), catering to consumers at large. Instead, they are ecommerce enablers, and grocery happens to be a high-frequency entry for them during the pandemic when online ordering and doorstep deliveries have become the new norms of grocery shopping. Eventually, they want to evolve into full-fledged ecommerce platforms that all kinds of retailers can use to set up their digital stores. The operational model is similar to Shopify. And the idea is to tap into the aspirations of small businesses keen to go online in a hassle-free, cost-effective way. Besides, the business solutions provided by these enablers are likely to woo small businesses away from major ecommerce marketplaces that take significant cuts off their revenues and refuse to share customer data.

India was home to around 63 Mn SMBs in FY16, as per the government’s estimate. Out of these, 44 Mn, or 70%, were unregistered, and the remaining 19.5 Mn were registered entities. According to industry experts, more than 15-20 Mn offline SMBs were expected to have transitioned to digital amid the pandemic to make their businesses sustainable and earn more revenue through online distribution channels for B2B and B2C products.

Although many enablers tried to latch on to this opportunity triggered by the pandemic, only a handful have survived. For instance, Bengaluru-based Dukaan, which shot to prominence last year amid a public feud with same-city rival Khatabook, recently reported $115 Mn in annualised GMV.

Owned by Growthpond Technology, Dukaan targets small-to-mid-size offline businesses and helps companies sell their goods via digital stores on Dukaan’s SaaS-powered platform. All a shopkeeper needs to do is download the Dukaan app, register the business (it takes less than a minute) and list the products. The link to the store can be shared with customers via WhatsApp for direct orders.

Speaking to Inc42, founder Suumit Shah claimed that the company clocked a 110% GMV growth in May this year, and the number of daily active users increased by 400% in the past three months, leading to a significant rise in the volume and frequency of the orders completed on the platform.

The lockdowns induced by the pandemic’s second wave have mostly triggered this surge as digital stores are once again playing a key role and ensuring a seamless supply of essentials and other goods. With 3.5 Mn+ sellers registered under 40 categories on the platform and more than 12 Lakh orders processed since its launch, the company earned a revenue of more than INR 28 Lakh in May 2021 when monetisation started through a subscription fee of INR 4,999 per year, the founder claims.

Compared to Dukaan, other players such as Bikayi recorded a merchant base of 2.8 Lakh+, doing daily transactions worth more than INR 2 Cr on the platform as of December 2020. DotPe’s Digital Showroom, launched in September 2020, claims to have over 5 Mn merchants on its platform. Those on Digital Showroom are doing monthly transactions worth more than INR 38 Cr, the company claims. In spite of their recent rise, most of these ecommerce enablers have either raised funding or are in talks to do so, helped by the large-scale adoption of digital commerce during the pandemic. For instance, within six months of its launch, Dukaan raised $6 Mn in seed funding, led by Matrix Partners India and Lightspeed India Partners. Requesting anonymity, a person with knowledge of the matter has told Inc42 that the company is eyeing another round of fundraising at a valuation of more than $100 Mn.

Meanwhile, DotPe, which operates Digital Showroom, raised $23.4 Mn in March 2021 from a plethora of investors, including Google, PayU and InfoEdge. However, they are nowhere near the kind of traction enjoyed by ecommerce and foodtech majors like Flipkart, Amazon, Swiggy and Zomato, which clock 5-20 Mn orders per month. But then, it has just been a year since most of these players have come into existence.

The kind of traction these B2B businesses are getting can also help ascertain their long-term viability. Although Bikayi, OkShop and MyStore did not share the numbers of stores and users on their respective platforms, a quick look at the website traffic gives one a fair idea of the pecking order in terms of popularity. According to Similarweb, Bikayi.com had 1.08 Mn visitors in May 2021; Dukaan registered 2.2 Mn hits. 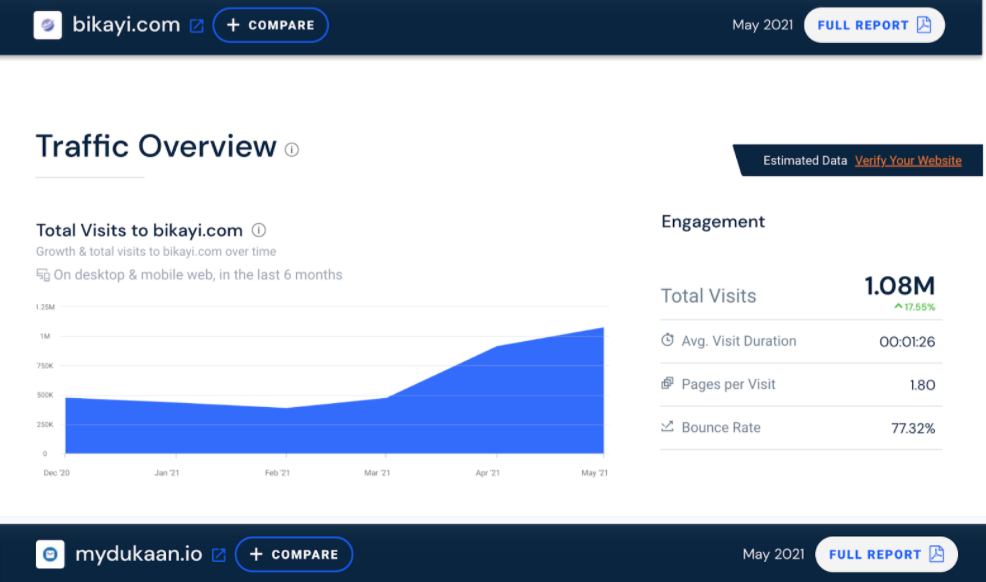 Hyderabad-based Bikayi’s minimum viable product, launched in March 2020, enabled neighbourhood shops to make the online transition with catalogues shared with customers on WhatsApp. When the Bikayi app gained in response and the startup started getting feedback from dukandaars (shopkeepers), it started adding more features, including integrated login for storefront staff, order tracking through SMS, customer reviews, live analytics of order and visitor numbers (on a daily and monthly basis) and inventory management, among others.

The company wanted to keep the user interface pretty simple for an unsophisticated target audience, but it was not ready to sacrifice on the feature front. “When a store adopts ecommerce, its aspirations rise, and we don’t want to be a tool that they skip at some point. Initially, everyone started as a cataloguing platform, but now everybody is trying out different models. Today, we are a SaaS-based subscription model that enables cataloguing and order management, and that will be the major difference between Bikayi and others,” cofounder and CEO Sonakshi Nathani earlier told Inc42.

Interestingly, the SaaS play adopted by dukantech enablers seeks to attract small businesses already using WhatsApp or other simple retail tech solutions instead of catering to first-time users. To drive adoption among SMEs and give them a taste of the larger ecommerce pie, the dukantech startups have also introduced a host of features like providing referral codes and social media integration of deals, discounts and catalogues.

But there is more. Dukaan has recently launched its digital payments features, allowing consumers to make advance payments to store owners through existing payments service providers. This minimises the possibilities of returned orders due to non-payment and brings better transparency in terms of expected income.

Shah of Dukaan tells Inc42 that digital payments integration has led to good customer response, with about 13% of all transactions happening digitally since the feature was launched in January this year. The company claims to have processed INR 105 Cr orders (gross merchandise value) through this integration.

Of course, Dukaan is not the first to integrate digital payments to record and facilitate transactions with merchants at one go. But this is an important step towards the segment’s maturity. Earlier, they relied on merchants/store owners to manually enter their transaction details and payment records as no payment integration was available on these apps, leading to errors and a wastage of time. It also led to allegations that apps were faking transactions or the number of store owners onboarded, thus driving the GMV of dukantech players and the subsequent rise in their valuations. In contrast, the advance payments feature makes things much more transparent.

It is pretty well-known that small businesses are always grousing about how ecommerce majors like Flipkart and Amazon do not share consumer data, an essential analytics tool that can help SMBs plan their businesses better. Besides, the take rates or commissions of these platforms can go up to 15%, depending on the category.

The biggest complaint is that ecommerce behemoths do not give them a level playing field. For example, these platforms may allot the best spots on digital real estate to the highest advertising bidder (businesses or brands can pay an ecommerce marketplace to feature their products on the top of a category irrespective of their popularity or ratings).

But the key reason why small businesses feel that they have been dealt a bad hand is the emergence and power play of private labels. Simply put, private labels are businesses that an ecommerce marketplace owns, and it is only natural that they promote those brands ahead of others. There are further allegations that ecommerce firms use the data culled from selling millions of products on their sites to choose what to produce — a cutting-edge technique to which small businesses lose out.

Worse still, armed with billions of dollars of expendable capital, ecommerce majors in India indulge in deep discounting that compels small businesses to cut prices and incur losses. At present, the Competition Commission of India (CCI) is looking to expedite the ongoing probes based on a complaint alleging that Amazon and Flipkart promoted certain sellers on their e-commerce platforms, and deep discounts stifled competition. The companies have denied any wrongdoing.

Although these factors may lead small and medium-sized businesses to choose dukantech platforms instead of ecommerce marketplaces, the former still has to address a critical issue.

The biggest promise of an ecommerce platform is that it allows consumers to discover businesses and brands without any constraint. But the problem with messaging platform-led dukantech stores is that there is hardly any discoverability. When a buyer decides to look for a specific product, he/she would like to surf through multiple brands and price points — a feature that is not available when one makes a purchase on WhatsApp and its ilk. In brief, the purchase done on dukantech apps is quite different from the traditional (and more convenient) ecommerce mode. Unless dukantech apps can onboard a critical mass of stores or businesses under a particular category — so that all the brands and products that a user may be interested in are available on search (within the app) — there is little chance that they can trump the ecommerce behemoths anytime soon.