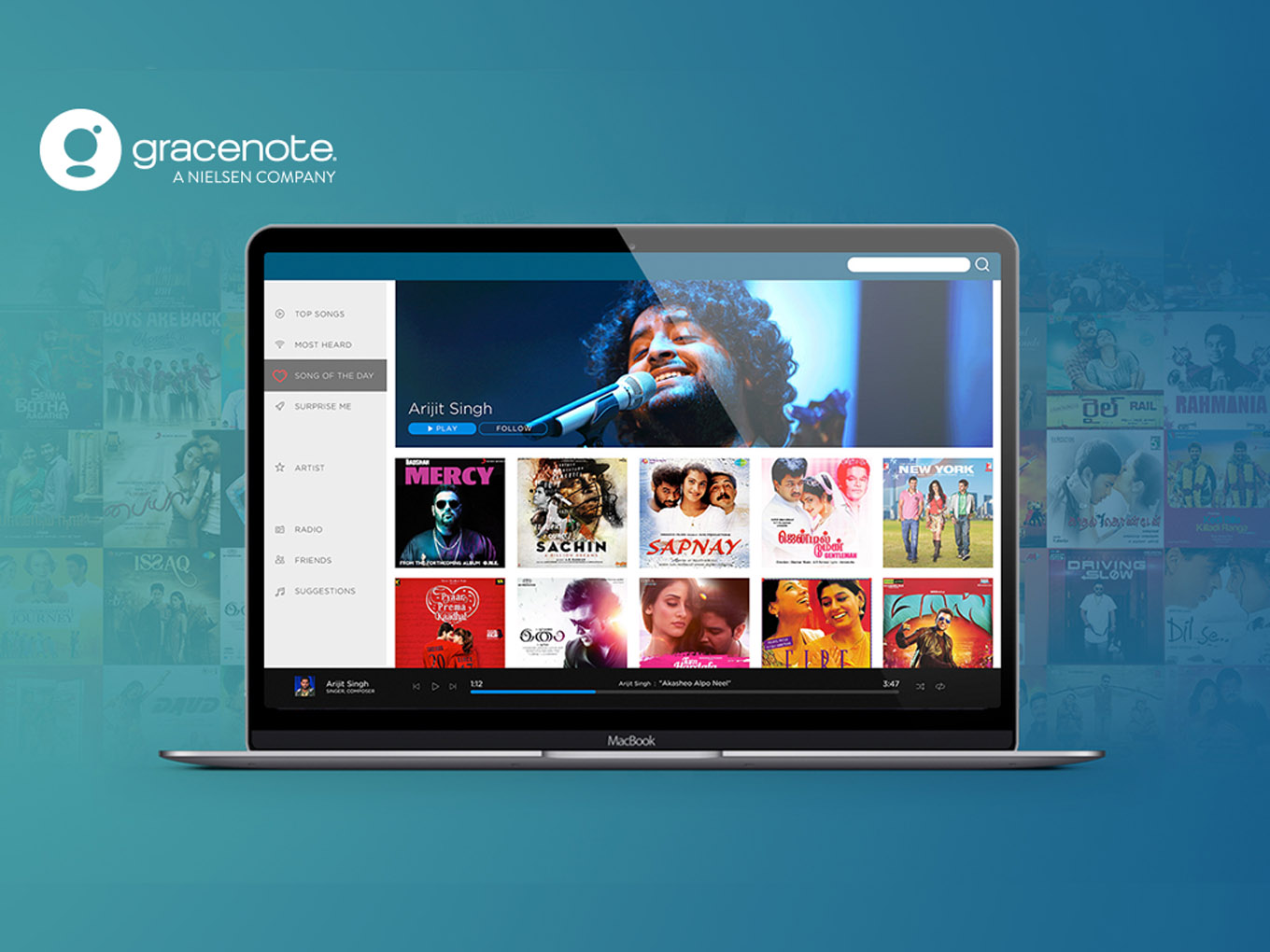 Gracenote’s music catalogue offerings in India will include languages such as English, Hindi, Punjabi, Tamil, and more

August 31 was King of Pop Michael Jackson’s 60th birth anniversary. As MJ’s fans the world over reminisced about their favourite singer and his hit numbers, our social feds were filled with throwbacks. One that topped the list was Thriller, one of the most iconic songs in pop music. As we know, a successful single begets many versions. So is the case with Thriller — some estimates point to about 27 versions of the song.

If you use a music streaming service such as Apple Music, Google Play, or Saavn, you’re apt to know that these platforms help you find the version you’re looking for with ease.

But imagine the overall challenge these music streaming services face since there are millions of tracks that have been produced and reproduced in the world. Cataloguing and indexing them manually could easily take a couple of decades, which makes this task literally impossible. So, how do these companies do it?

Enter Gracenote Global Music Data — a music and video recognition company that’s helping your favourite music streaming services streamline and index their offerings. Gracenote has built its core business around providing music metadata to record labels and to the likes of Apple, Google, and Spotify.

It helps these companies classify and label artists, albums, and recordings through its proprietary ID system that associates the right content with the right artists to enable smarter search and discovery across digital media catalogues.

The proprietary ID system built by Gracenote uses a combination of machine learning and editorial supervision to comb through millions of tracks and then link them to the relevant recording artists, actors, and music directors.

Today, Gracenote has metadata on more than 200Mn tracks, TV listings for over 85 countries like United States, Korea, Japan, Europe, Latin America, Australia, New Zealand and now India , in over 100 Mn smart cars, and statistics from 4,500 sport leagues and competitions across the world.

The California-based Gracenote, which was acquired by Nielsen in 2016, has now turned its gaze towards India, launching its first customised offering for the Indian market last month.

The company has a editorial team in Mumbai with more than 250 editors. Over the last 18 months, they have been working to develop an India-focussed music catalogue with offerings in languages such as English, Hindi, Punjabi, and Tamil, with more languages slated to be added soon.

“The market for digital content is growing as more people in India now have access to an Internet connection and to devices that can stream content. There is a land grab going on among music streaming companies and we want to be part of that expansion,” said Brian Hamilton Hamilton, general manager, Music and Auto, Gracenote, worldwide.

Hamilton, who has been with Gracenote for over 18 years, says that Google Play Music has done a great job of capturing the music app market — more than 60% of app users use the Google Play Music app — but competition is intense and every player wants to be ahead in a market that is nascent but has a lot of potential.

Reliance Jio’s disruption of the Indian telecom sector, sparked by radically cheap data plans, has had a profound impact on digital content consumption in India, as can be seen from the sharp rise in data usage and vernacular content online. Music is no exception.

Although Google holds the number one spot when it comes to music app downloads (how many of these subscribers use the paid version of the app is not clear), Jio’s acquisition of music-streaming portal Saavn in a $1 billion-plus deal is heating up competition for Google.

Considering the size of the population that’s accessing content online, native music streaming services such as Gaana and Saavn have raised money from big investors such as Tiger Global and Tencent, respectively, with Spotify also set to enter the Indian market early next next year.

Indians, on a average, now spend 20 hours every week listening to music, according to India Music 360 report published by Nielsen this year.

Additionally, India has a large diaspora of people living outside the country, many of whom listen to Bollywood music. The number is set to increase with many such music streaming companies servicing the market with their global offerings.

Gracenote aims to further fuel this growth and is in talks to providing its Indian music metadata offering to music streaming services and record labels such as SaReGaGaMa, Sony India, and Universal India.

Hamilton put further stock in the fact that revenues from the recording and music publishing segment in India are growing significantly for the first time in many years and, in the next five years, one can expect to see a very robust digital music market take shape in the country.

Gracenote has had a presence in India since its 2014 acquisition of What’s-On India, a provider of metadata covering TV shows and movies, but this is the first time it is bringing its music metadata service to the country.

“It’s like how detergent is for your clothes,” is how Hamilton crudely describes what Gracenote does, as he says that the company gets its music data feeds much in the same way as Apple gets its feed from record labels and aggregators of independent record labels.

Hamilton explains that the data delivered to Gracenote is not in a good condition or well-organised — duplications abound, accompanied by spelling errors that fragment music collections. 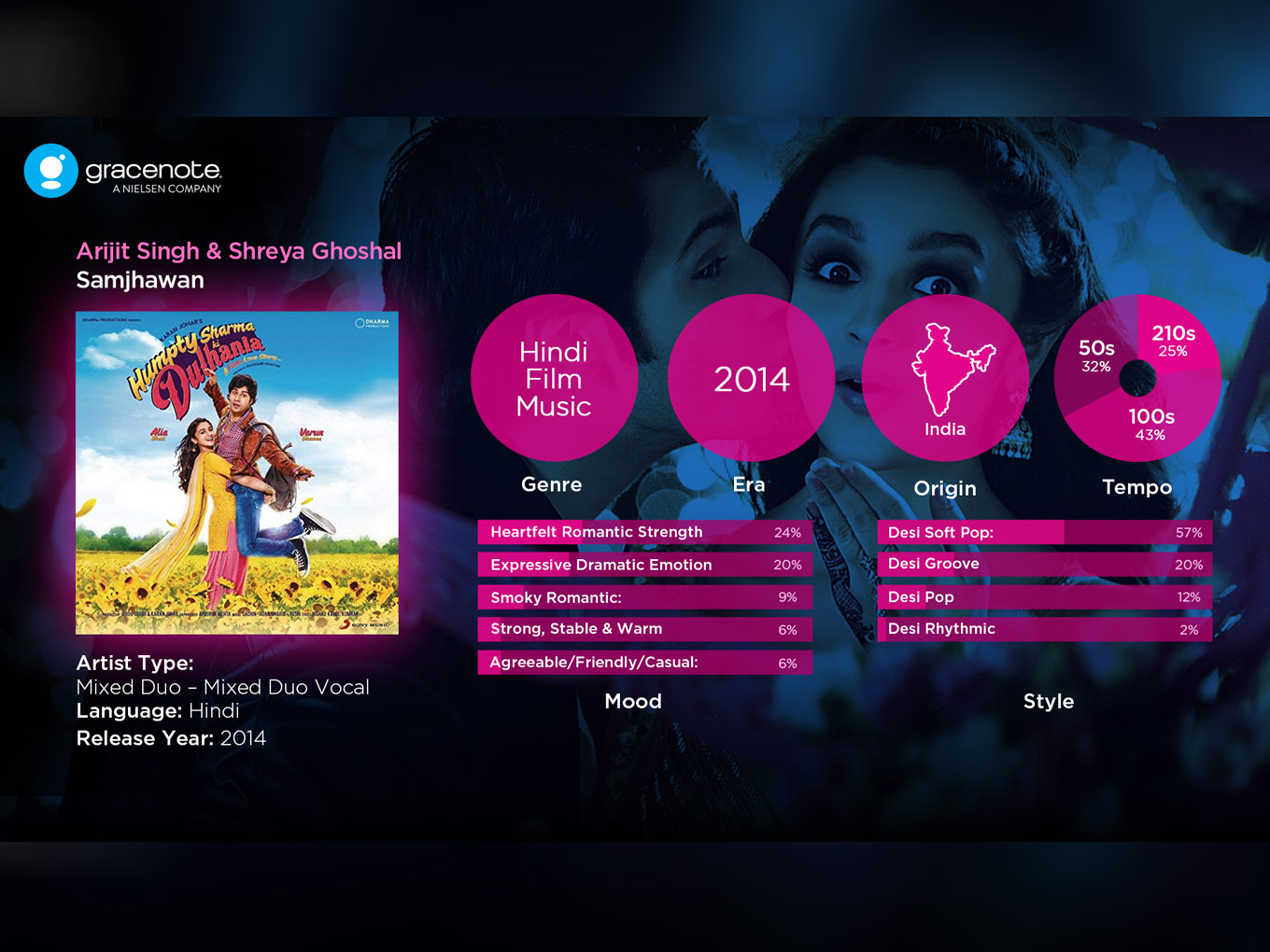 Gracenote uses machine learning and AI to go through millions of music catalogues — a task that would take years if done manually. Hamilton cites online radio service Pandora as an example, which has spent 14-15 years cataloging without AI and has been able to scale to only a million tracks till date.

Gracenote, which was founded in 1995, became one of the world’s first crowd-sourced database, which powered compact disc recognition in the earliest versions of Apple’s groundbreaking iTunes service and iPod.

What has worked for the company over the years is that it has kept up with the times and evolved its business by diversifying into servicing connected cars and helping with TV searches and listings (basically, helping you find out what time the football game starts on your television).

But, Gracenote’s core focus of enabling search and discovery of music hasn’t changed.

Gracenote Wants Music Streaming To Be On Fast Forward

According to a KPMG report published in 2015, India’s recorded music business was set to nearly double over the next five years, led by digital, bringing in an total annual income of INR 18.9 Bn (US $300m) in 2019.

Creating value in this market is critical and Gracenote wants to play a pivotal role in doing that.

“For the most part, Gracenote does not have global competitors in providing music metadata. We’ve found that regional streaming services have developed their own homegrown solutions  to help structure and manage enormous amounts of music data. Gracenote Global Music Data has unmatched depth, breadth, and structure, and, most importantly, interconnectivity, which enables next-generation universal and cross-media search,” said  Tom Retigg, vice-president of product, Music, at Gracenote.

Gracenote derives its philosophy from the belief that a consumer needs to see the value of discovery and creation of customised playlists, because there is no value she is gaining if she is just playing the Top 10 songs that can accessed from anywhere everywhere.

“To go down deep into this 30 Mn-plus catalogue and help people feel excited to discover music in innovative ways…this is something that we want to provide solutions for,” said Hamilton.

As such, India represents a lucrative market where unheard of growth is not a mere statement but a possibility. In a report last year, Forbes called India the global music industry’s “sleeping giant”, which is finally waking up.

Gracenote is hoping to be there when the sleeping giant wakes up and smells the coffee.