Dunzo, Blinkit Or Zepto: India’s Speedsters Stack Up In The Qcommerce Battle

Dunzo, Blinkit Or Zepto: India’s Speedsters Stack Up In The Qcommerce Battle

Delivery speeds are the single most important factor for customer acquisition, followed by listed products, and offers and discounts

Bad customer service is the biggest disappointment, followed by location availability and ease of refunds

India’s quick commerce (qcommerce) market has grown leaps and bounds in the last few years. The segment, which started with pick-up and drop service, has come a long way since Bengaluru-based Dunzo introduced the concept of hyperlocal qcommerce in 2015.

Indian urban consumers have been gradually introduced to convenience shopping for groceries, and even food now.

While Indians are adopting qcommerce at an unprecedented rate, there are clear customer preferences and choices that dictate the entire landscape. One of the most marketed phenomena has been the delivery time offered by these qcommerce platforms.

From about 30-45 minutes of Instamart to around half an hour of Dunzo to 10 minutes of Blinkit and Zepto, the race for delivering as fast as possible has been a subject of intense debate.

Convenience is one part of the qcommerce apps, but for customers, who are spoilt for choices, factors such as the number of SKUs, offers and discounts play a crucial role in decision making.

To a smaller extent, customers also care about the safety protocols followed by these apps and platforms and the packaging they use, but most of them are mere afterthoughts – the Indian psyche, in terms of quick commerce, is dominated by speed.

On the other hand, there are multiple issues in delivery which the customers have to deal with.

While customer service tends to be the most important factor for customers, other factors such as the delivery partner’s conduct, location availability, and refunds also play a role in the overall rating of an app.

And so, after looking at what makes Uber and Ola tick and what doesn’t, Inc42 has partnered with real-time customer experience analytics platform Clootrack again, this time to look at 57K customer reviews of leading qcommerce platforms in India on the Apple App Store and Google Play Store.

The qcommerce startups market their delivery time heavily, and it seems that the customers perceive it as the most important offering of a qcommerce company.

And sure enough, delivery time is the highest valued aspect of customer acquisition. Customers value the delivery time of the qcommerce companies the most. With a Consumer Delight Score of 7.3, delivery time seems to be a major factor affecting the decision of choosing a qcommerce app.

While the likes of Zepto, and Blinkit, among others, promise delivery in 10 minutes, some other startups take slightly higher delivery time. Here’s a look at the delivery times being promised by them. 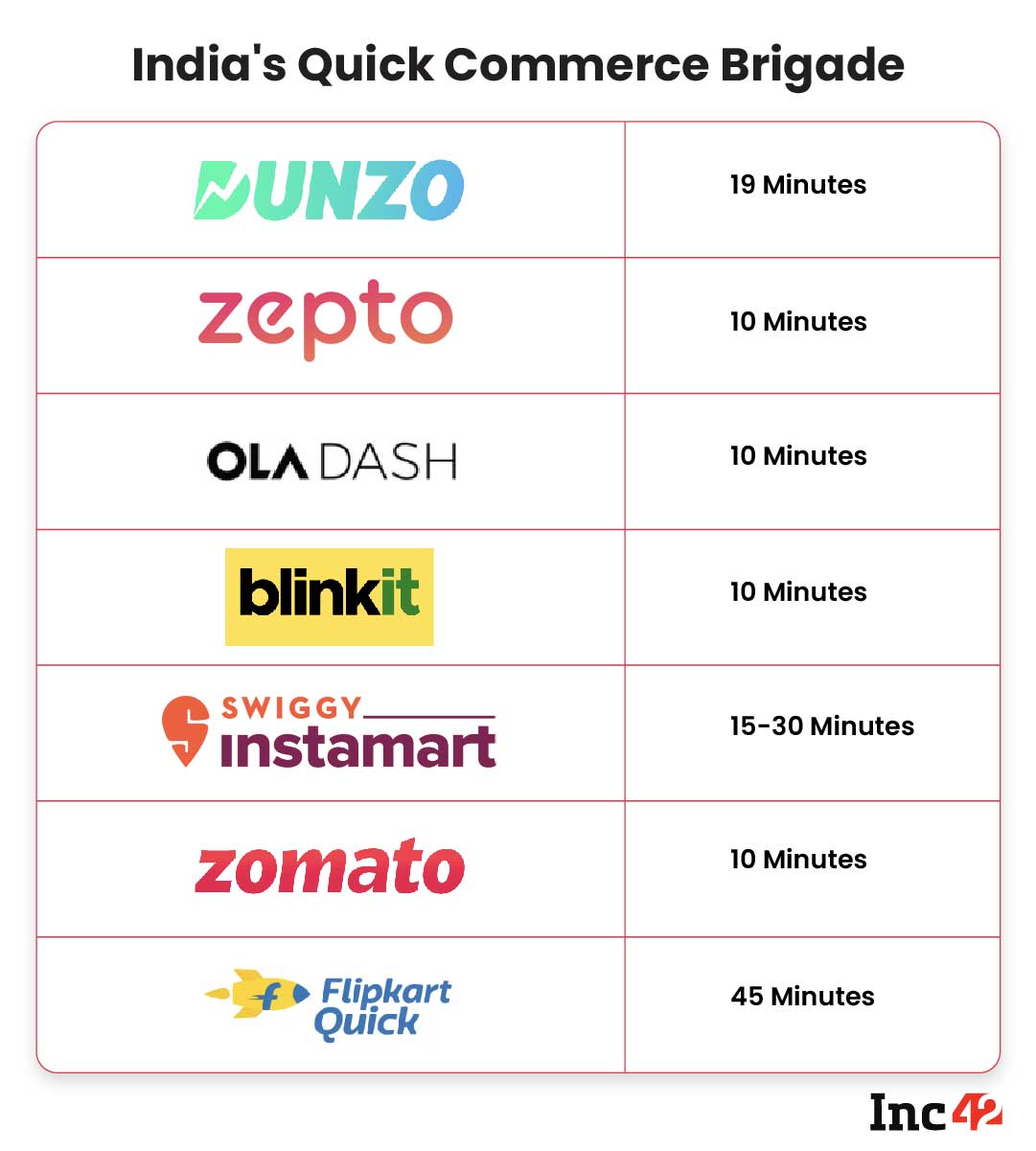 The second most important factor for a qcommerce startup to acquire customers is the products listed on its platform, which has a Customer Delight Score of 4.8, according to Clootrack.

This highlights the need for the qcommerce startups to invest in quality dark stores and provide the maximum number of listings.

As hyperlocal delivery players aim to deliver faster, most of them are setting up multiple dark stores/mini-warehouses across neighbourhoods to meet the delivery rush in the shortest possible time. Both dark stores and cloud/ghost kitchens are B2B delivery-only facilities, and consumers cannot directly purchase from these units.

Surprisingly, users of quick commerce apps don’t care much for offers and discounts, even though this is something that almost every ecommerce platform strives to achieve. A Customer Delight score of 3.5 goes against the commonly held belief that discounts are needed to attract customers.

The finding that the delivery time is the most important for customers will come as a delight to the qcommerce startups who fret a lot over the delivery time. This also begs the question, which startup is the fastest?

According to Clootrack, Zepto seems to be a clear winner when it comes to delivery time. Zepto, which recently raised $200 Mn, taking it to the doorsteps of the unicorn club, was given a Brand Equity score of 8.9 out of 10 for delivery time, almost 2 points more than the second-placed Dunzo.

Blinkit, which offers the same delivery time as Zepto and claims to be almost twice as fast as Dunzo, ended up third on the list with a Brand Equity score of 3.4.

Customers’ perception of speed is very subjective and case-specific, and the same argument is reinforced here. Even though Blinkit promises a 10-minute delivery, it is perceived to be slower than Dunzo, which promises delivery in double the time.

According to Clootrack’s analysis, Dunzo appears to be winning the race of discounts, followed by Zepto. 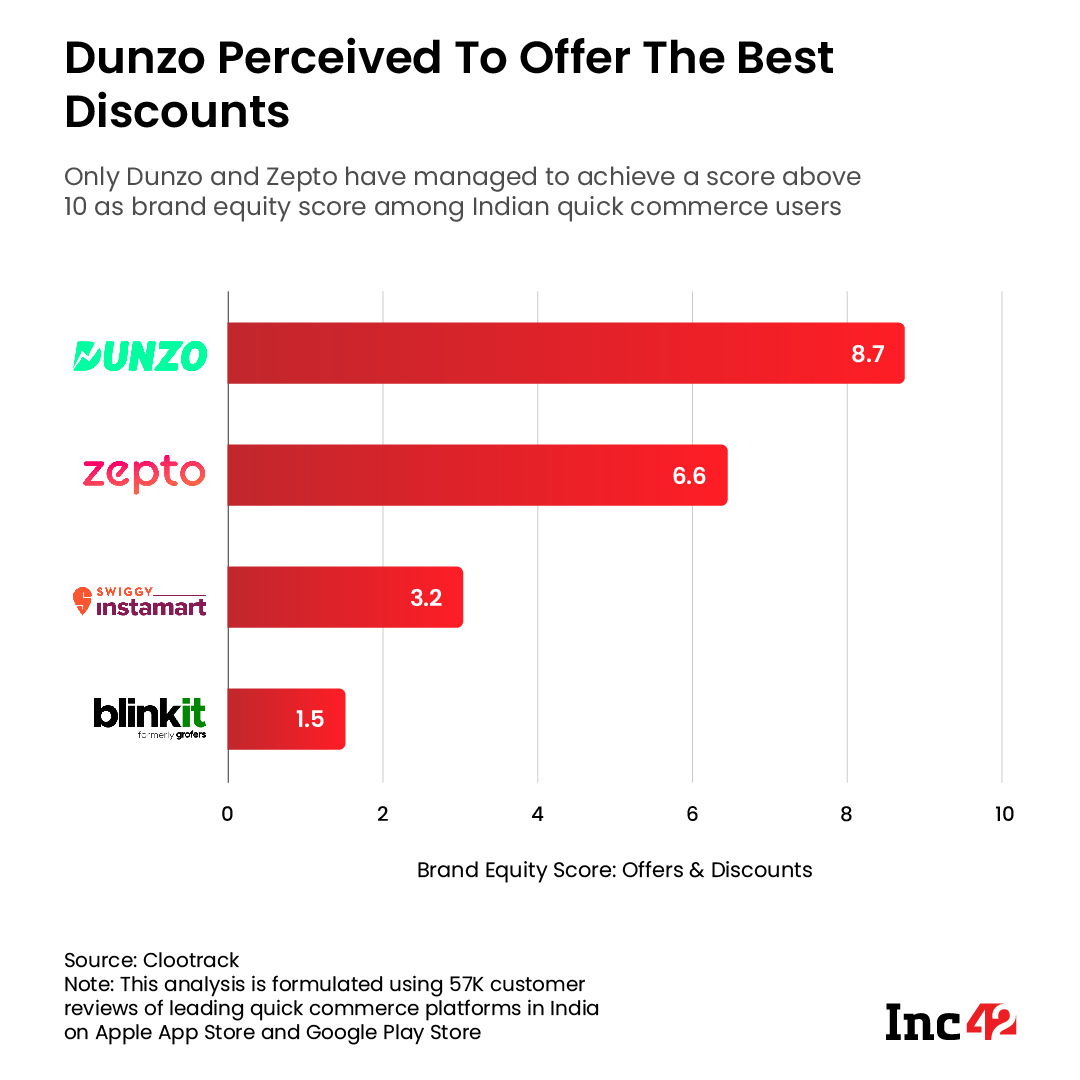 What About Customer Care?

One of the most important factors, not only in qcommerce but in almost all the businesses, which influence the choice of consumers is customer care. Consumers hate bad customer service the most, and had the highest Consumer Disappointers Score of 7, according to Clooktrack’s analysis of disappointments for qcommerce customers.

Location availability was the second on the list, followed by issues with refunds and the conduct of delivery partners. 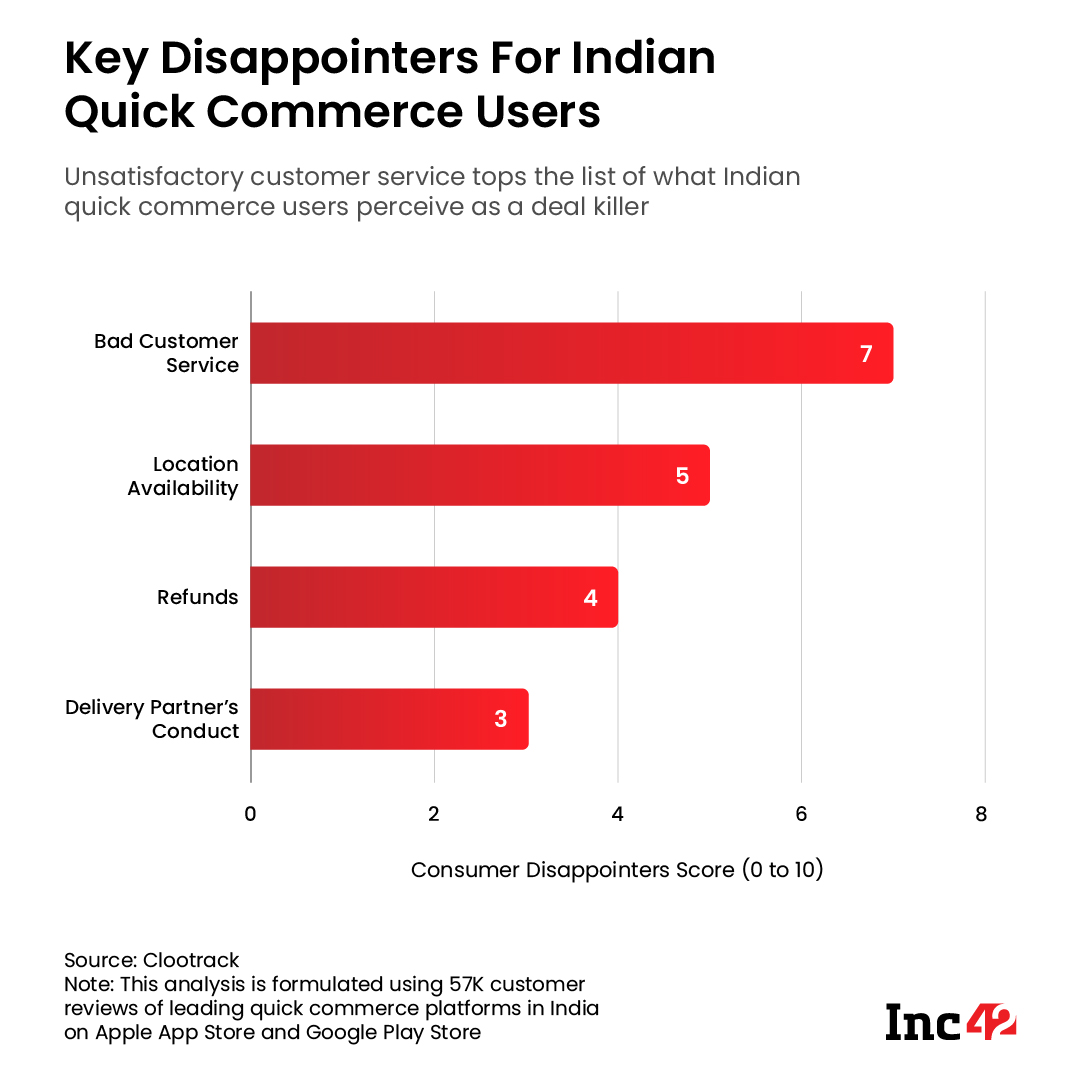 Blinkit and Swiggy Instamart were perceived to have the worst customer service and delivery partner conduct, respectively, according to the analysis. 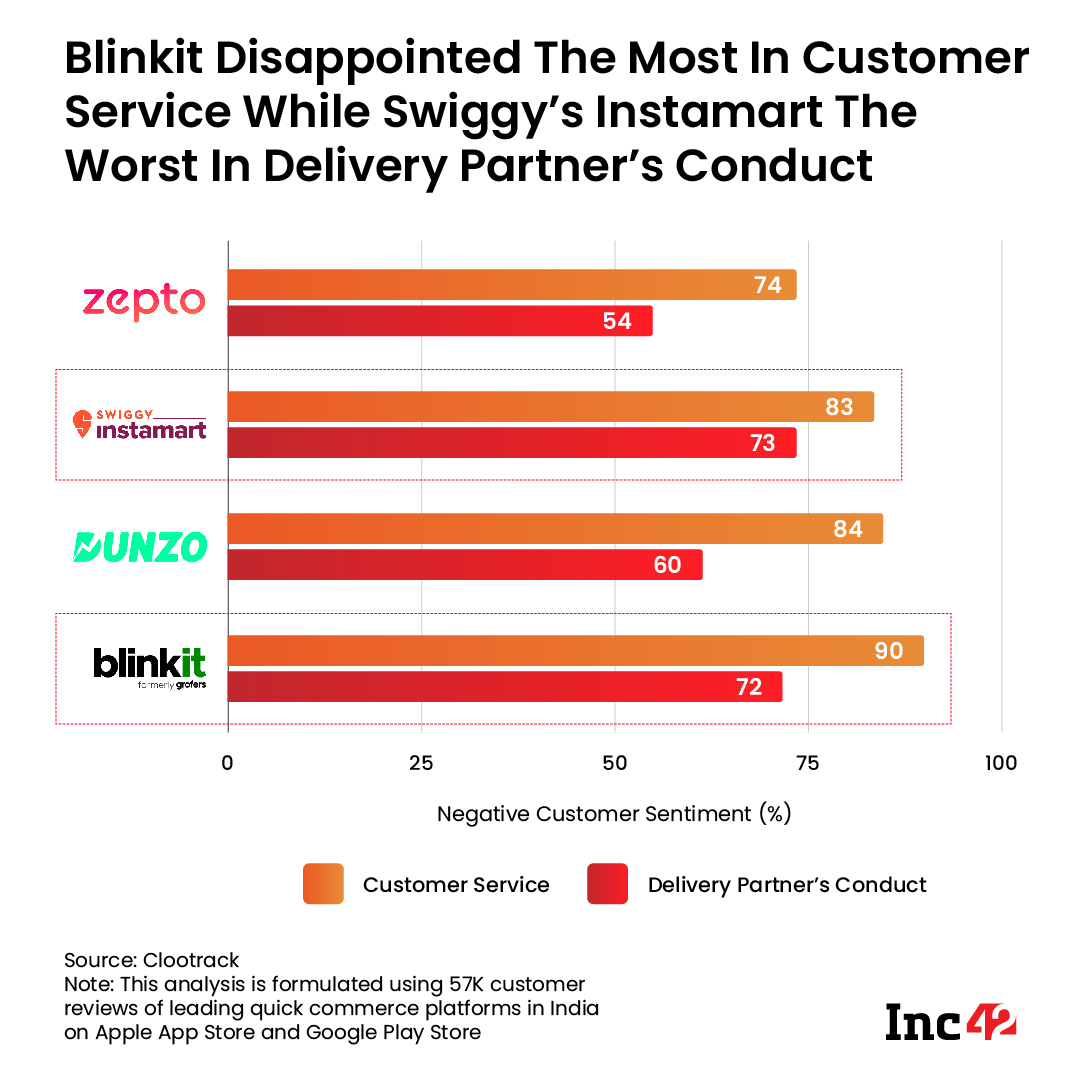 Despite having a total addressable market of $45 Bn in India, there have been questions about the sustainability of the qcommerce model.

“The profit window for these qcommerce companies is limited, as not all online shoppers would like to pay a premium for deliveries. Further, since qcommerce players also need to invest in procuring their inventory, scaling up can pose a challenge, unlike a delivery platform, which is asset-light,” said Harsha Razdan, national leader – consumer markets, life sciences and internet business, KPMG India.

Therefore, it makes sense to look at the factors that drive customer acquisition and churn and influence customer perception.

In our joint exercise with Clootrack, we saw that India’s quick commerce customers have started to pay less attention to sparkly things such as discounts. On the other hand, they have also started paying more attention to customer service.

These are still early days for the qcommerce segment and it’s almost impossible to predict who will win the race among the startups in this segment. However, the exercise does show that Zepto and Dunzo have a lead in the segment, and the chasing pack will have to work harder to catch up.