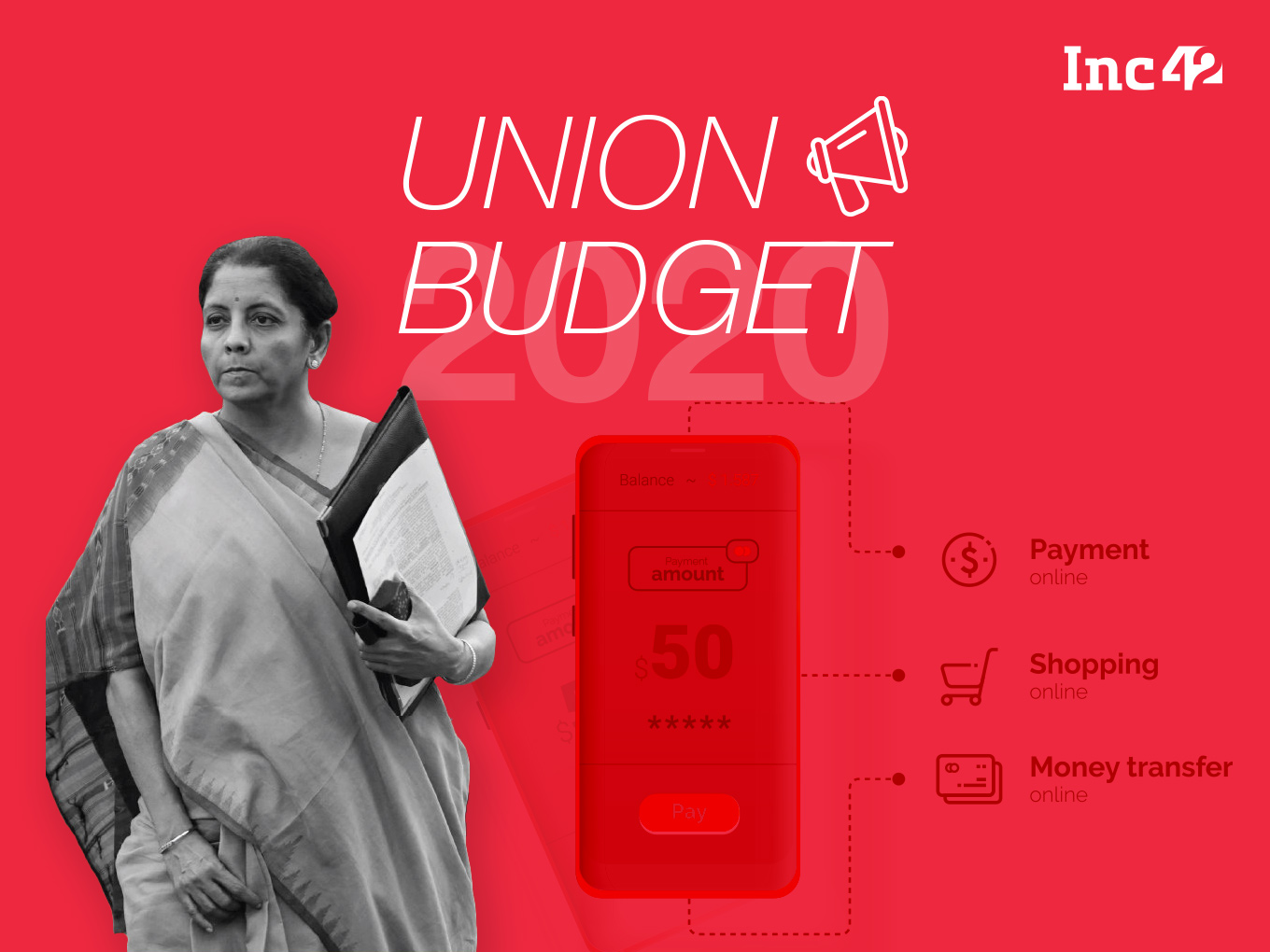 Addressing the lowest consumer spending should be a top priority, many fintech entrepreneurs told Inc42

This entire year, Prime Minister Narendra Modi and his ministers’ speeches have been abuzz with Modi’s grand plan of making India a $5 Tn economy in the next five years.

Looking at the lowest GDP growth in the last six years, the lowest consumer spending and many other parameters such as combined index of eight core Industries which has declined by 1.5% this year, economists and industry experts have been wondering about the $5 Tn roadmap and the government’s stubbornness to accept the difference between plans and planning.

In their latest research paper “India’s Great Slowdown: What Happened? What’s the Way Out?” PM Narendra Modi’s former chief economic advisor Arvind Subramanian and Josh Felman point out that with growth collapsing, India is now facing a Four Balance Sheet challenge—the original two sectors, plus NBFCs and real estate companies. In this situation, the standard remedies are no longer available. Monetary policy cannot revive the economy because the transmission mechanism is broken. Fiscal policy cannot be used because the financial system would have difficulty absorbing the large bond issues that stimulus would entail. The traditional structural reform agenda—land and labour market measures—will not address the current problems

In such a scenario, making India a $5 Tn economy by 2024 is nothing less than winning a war. And, in a war-like situation, one always has to be ready with plan B, C etc with equal preparation.

On the difference between plan and planning, former US President and the chief of US Army staff during World War II Dwight Eisenhower had once said, “Planning is everything, plan is nothing.”

And, the $5 Tn plan laid out so far is in bits and pieces. On December 31 evening, when perhaps everyone was preparing for their night outs, finance minister Sitharaman announced another trillion-dollar plan in order to achieve the first one. In her press conference, it was announced that $1.4 Tn would be invested on infrastructure over the next five years including social and economic infrastructure projects to achieve the GDP of $5 Tn by 2024-25.

Besides infrastructure, the government is also expecting India’s digital economy to contribute $1 Tn to the target of making India a $5 trillion economy,

One can, however, see the $1 Tn digital economy in the offing to some extent, thanks to the fast-rising of fintech startups and other emerging technologies. The UPI transactions have recorded over a billion transactions per month since October, locally developed Rupay card platform has gone global with various countries including UAE, Bahrain, Singapore, Bhutan and Saudi Arabia green signalling its uses at their home turf.

However, the liquidity crisis, economic instability, taxation issues and newly launched zero MDR (merchant discount rate) have been biting the payments, NBFC and fintech sector in terms of revenue and working capital.

And, like every other sector, payments and NBFCs too want some form of tax relief as well as incentives to bank on this Budget 2020.

What are the demands of fintech sector from the upcoming Budget 2020?

Inc42 spoke to the stakeholders.

Merchants have to pay a certain amount to banks for offering them the infrastructure to accept digital payments. This is called the merchant discount rate (MDR). The amount is usually shared by the bank as well as the payments enabler or the cards company.

Supported by the likes of Paytm, BharatPe and many other companies Sitharaman had announced plans to introduce zero MDR during the last Union Budget 2019. The finance minister had then announced,

“I, therefore, propose that the business establishments with annual turnover of more than INR 50 crore shall offer such low cost digital modes of payment to their customers and no charges or merchant discount rate shall be imposed on customers as well as merchants.”

This has reportedly been implemented only last month and will be applicable for UPI and RuPay cards.

Ashneer Grover, CEO & cofounder, BharatPe told Inc42 startups expect the Union Budget 2020 from the government to put into effect the Zero MDR regime promised in the last budget. “Making payments free is imperative for wider and easier distribution of credit to small businesses which will help get the economy back on track. The payment commissions are only making banks more profitable – and sucking capital away from businesses as against providing them credit. This will have a higher impact than the GST waiver being proposed on digital payments,” Grover said.

Undoubtedly, zero MDR would help encourage consumers adopt digital payments more freely. But the question again comes back — was zero MDR just a rushed announcement or was there enough planning for the implementation? The government has not yet come out on the revenue model on who will bear the cost of enabling digital infrastructure for digital payments. For many startups, it is their bread and butter.

“The prohibition on charge of MDR on Rupay and UPI would kill the industry and make the business model unviable. It’s like nationalization of the payments industry. There would be a significant negative impact on the payment ecosystem –innovation, job losses and a slowdown in the expansion of the digital payments in India.

As there has not been much light shed on the revenue model part, Utkarsh Sinha, MD-Bexley Advisors told Inc42, “Clarification on the Zero-MDR regime would be a big help. It is a significant hindrance to expanding the digital payment infrastructure; we need to let market forces determine the prices for laying down infrastructure. With a zero MDR prescription, there is no incentive to go far and wide when the returns are forced to zero, unless there is a significant government subsidy to offset that cost.”

Prime Venture Partners managing partner Sanjay Swamy has been vocal about zero MDR. In a series of tweets, he explained, “In the US which is a Credit-based society, the merchants are convinced that paying the MDR increases their business volume – it is a simple trade-off by the (educated) merchant. In a country like India dominated by #DebitCards, the payment of #MDR makes little sense. Hence the government’s decision to mandate a #ZeroMDR.”

However, he too cautioned about the aftermath. In order to resolve the issue, Swamy brought forward a two-point formula:

Focus On Increasing The Consumer Spending

On one end, the government has issued over INR 150K Cr to the public sector banks in the last two years to address the liquidity crisis and lending credit which was seen as a big positive move for NBFCs.

However, this ain’t gonna solve the problem of NBFCs fully until and unless decreasing consumer spending issue is addressed. Razorpay cofounder Harshil Mathur feels the current economy needs a lot of push and measures to bring it back on the track.

“In the last few months, a slew of initiatives have been made and their benefits could be noticed. However, it’s a constant process and I think the Budget 2020 should be focused a lot on increasing consumer spending, because that’s the biggest challenge. Right now, the consumer spending itself is at a very low. And that is our biggest concern,” Mathur told us.

Has angel tax issue fully sorted? No, responds Bexley’s Sinha. “There are still significant gaps in the angel tax issue, with miscategorization and misreporting internally that is obfuscating the true pains being felt by tech and fintech entrepreneurs. In Budget 2020, this needs to be put to rest once and for all, so that the funding flows can revert to their natural levels. ”

Besides, efforts have been made to encourage the growth of NBFCs in India. Last year, the FM had also announced that interest on bad or doubtful debts in the case of deposit-taking NBFC and systemically important non-deposit-taking NBFC shall be charged to tax on receipt basis. It also stated that deduction of such interest shall be allowed to the payer on actual payment.

“One of the biggest things that could help is if the government can push the banks to partner with retail-focused NBFCs to ease access to capital to the MSMEs.” – Hardika Shah

MSMEs have finally been categorised as priority sector lending (PSL) which gives NBFCs an equal footing with the banks. “We would like to see PSL open up banks to lend to last-mile distribution NBFCs and retail NBFCs that are the first line of support to the MSMEs. Structurally, the government can make it easier for MSMEs to survive the economic changes by providing more subsidies to some sectors and build more platforms for small-scale industries to expand. Government should consider relaxing and easing some compliances, for e.g. reforms on taxes or entry requirements for DFIs,” she added.

Gaurav Chopra, CEO IndiaLends, President, Digital Lenders Association of India said that startup firms are expecting the government to usher in a new set of reforms in the upcoming full Budget for the current fiscal and hope for tax relief, funding access, and further push to the digital economy. It comes at a time when the consumption demand is not growing fast enough, investment is tapering and exports are falling.

“Tax benefits should be offered to the fintech startups in the form of exemption and exempt private investments in the sector from unfriendly tax burdens. Now, the Fintech companies are expecting incentives for startups and an overall reduction in the Corporate Tax which didn’t come through the last time,” said Chopra.

Razorpay’s Mathur also believed that to encourage fintech startups, especially payments, the government will have to extend some tax breaks and incentives to help sustain the growth of fintech sector.

Growing at a CAGR of 18.3%, the total transaction value in the digital payments segment amounts to $81.2 Bn in 2020, according to a report. Post demonetisation push, Mathur asserts that the government needs to push the digital payments campaign further to tier 2 and tier 3 cities.

A major chunk of merchants in Tier 2 and Tier 3 cities who had turned to digital payments due to the demonetisation issue, are now back on using cash.

India’s digital payments clearly need another push. Mathur advocated that there needs to have some incentivisation for accepting digital payments. The mantra should be that if merchandise accepts at least 25% or a certain percentage of their payments digitally, they should be incentivised.

“The tier 2 and 3 cities’ infrastructure needs to be digitally enabled. The internet is still not stable in Tier 2 and 3 cities. This is something that the government must look into,” said the Razorpay founder.

These are only a few of the demands made by fintech startups, there remain a plethora of issues that they want the FM to address. Among these are:

On the measures taken by the government, Harshvardhan Lunia, cofounder and CEO, Lendingkart said that while the government has already initiated several steps to support the NBFCs, real implementation and intended effectiveness through uninterrupted government push will encourage more investments in this sector.

“We hope that Budget 2020 will continue to show support to the sector and help promote more such ground-breaking ideas on the ground,” said Lunia.

As startups demand more incentives from the government, which is already facing huge balance deficit, what’s the way forward to revive the economy?

In his paper, Subramanian has laid out six-point action plan, each of which is associated with one of the five R’s—the five main aspects of the problem. To resolve the Four Balance Sheet problem, Subramanian and Felman advise: