After Delhi HC Ruling, What’s Next In Amazon Vs Reliance-Future Retail Deal?

After Delhi HC Ruling, What’s Next In Amazon Vs Reliance-Future Retail Deal?

This week, the Delhi HC upheld the Singapore International Arbitration Centre’s earlier decision from October 2020, when it had stayed Reliance Retail’s acquisition of Future Retail

Later, Amazon objected to the deal and served Future a legal notice. It argued that by agreeing to the sale of its business to Reliance, Future was violating the non-compete clause in its contract with Amazon 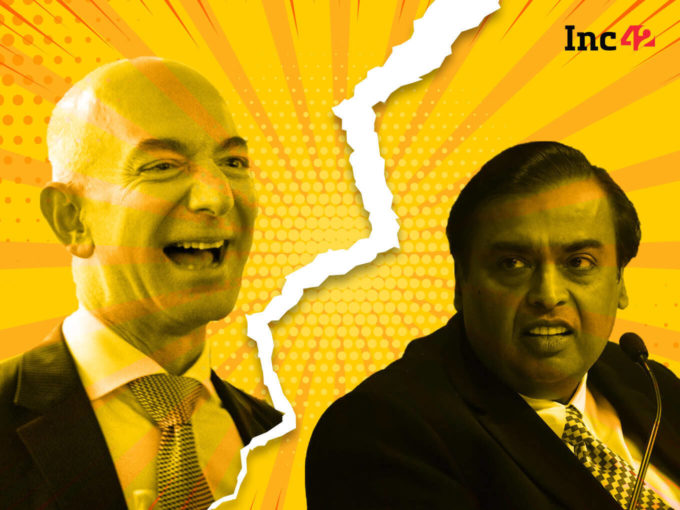 A legal battle involving two of the world’s richest men fighting over a raddled brick and mortar retail chain with a rich legacy seems to be drawing to a close. And after over five months of petitions, hearings, see-sawing interim verdicts and verbal assaults, the US-based ecommerce giant Amazon has gained an important and possibly definitive victory.

On Thursday, the Delhi High Court upheld the Singapore International Arbitration Centre’s (SIAC) decision from October 2020, when it had stayed Reliance Retail’s acquisition of Future Retail, in response to arbitration proceedings initiated by Amazon.

In August last year, Reliance had agreed to buy Future Group’s retail, wholesale, logistics and warehousing divisions for INR 24,713 Cr. Soon after, Amazon objected to the deal and served Future a legal notice. It argued that by agreeing to the sale of its business to Reliance, Future was violating the non-compete clause in its contract with Amazon.

Amazon, which in 2019 had bought a 49% stake in Future Coupons, the promoter-entity of Future Retail, has contended that according to its contract with Future, the sale of the business to certain companies, including Reliance is barred.

Then in October, two months after the deal was announced, Amazon won a temporary injunction against the deal when it initiated arbitration proceedings at SIAC. Since then, both parties have been warring in Indian courts, with Amazon looking to prove that the SIAC decision is applicable in the Indian scenario as well, and binding on Future Group.

Future’s lawyers have argued that Future Retail — the entity that signed the deal with Reliance — was not part of the contract between Amazon and Future Coupons. However, Amazon’s counsel has argued that both Future entities have the same owners.

Notably, Future Group was on the verge of bankruptcy when the deal with Reliance was inked.

In January, Future Group founder Kishore Biyani said that the Reliance deal was a saviour for the company, its employees and stakeholders. He accused Amazon of leaving Future Group in a lurch. Biyani added that Future Group had reached out to Amazon eight times last year seeking financial help, but no support was provided.

The Future Group sale was expedited by its creditors after Biyani had defaulted on loan repayments in March 2020. It is reported that Future Group firms owe around INR 16,000 Cr to a clutch of banks and debt mutual funds, while Biyani owes close to INR 11,000 Cr to lenders.

The delay in the proposed deal between Reliance and Future Group could see the latter’s creditors see their loans to the company turn into non-performing assets (NPAs).

Future has argued in courts that if the deal with Reliance doesn’t go through, it would mean the end of the company and result in the loss of thousands of jobs. The company’s counsel has often compared Amazon to the ‘East India Company’, accusing it of driving an Indian firm to the verge of bankruptcy. On the other hand, Amazon has argued that if Future is allowed to renege on its contract, it would adversely affect investors’ sentiment towards India.

What The Delhi HC Ruling Means

This week, the Delhi HC not only upheld SIAC’s earlier order but also directed its enforcement. The court observed that Future Group’s objections to the SIAC decision were “frivolous” and ordered the company to pay INR 20 lakh as a penalty, into the Prime Minister’s Relief Fund with the specific purpose of vaccinating those living below the poverty line, against Covid-19.

The court said Future Retail, Future Coupons and Kishore Biyani had violated SIAC’s emergency award and issued a show-cause notice to Biyani and the company’s other promoters asking why they should not be detained in civil prison for violation of the emergency award, to be responded to within two weeks from the date of the order.

The respondents (Future Group) were directed not to take any further action that may violate the emergency award. The court has relisted the matter for April 28, when it may pass further orders to ensure compliance with the directives issued this week.

In December, Future Group had filed a suit in the Delhi HC, seeking to restrain Amazon India from trying to stall the Reliance-Future deal by writing to statutory authorities. The court had refused to restrain Amazon, saying that the company had full right to write to the Securities and Exchange Board of India (SEBI) and other regulators to explain its case.

By then, Amazon had written multiple letters to SEBI and the stock markets, urging them not to issue no-objection certificates for the Reliance-Future deal, citing the decision of SIAC.

By January, both SEBI and the Competition Commission of India (CCI) had approved the Reliance-Future deal. On Thursday, the Delhi HC ordered Future Group to approach the said authorities for recall of the approvals granted to the deal earlier.

Will The Supreme Court Have The Final Say?

Last month, a different bench of the Delhi HC had allowed the Reliance-Future deal to go through, a move that Amazon had called “illegal” and “arbitrary” at the time. The ecommerce giant had approached the Supreme Court against that decision.

Late in February, the apex court stayed the deal and instructed the National Company Law Tribunal (NCLT) to proceed with its hearing on the deal but not pass any final decision until it received further orders.

“The order passed today unless challenged is likely to have a bearing on those proceedings since the position of Amazon, regarding SIAC’s order stands vindicated. Today’s order is of course not binding on the Supreme Court but will strengthen Amazon’s position before the apex court,” said Mayank Mishra, partner at IndusLaw.

“Future Group will in all likelihood challenge the order passed today and will also seek a stay of the order passed. Depending on what the appeal court holds, for now, it will be difficult for Future Group to escape the Emergency Arbitrator’s order. This will potentially throw a spanner in the wheels for the Future-Reliance deal, at least till this order is challenged,” he added.

The arbitration proceedings are expected to proceed quickly. It still may take up to a year for a final award in the matter, which could also be challenged before a court. Although, the ambit of arbitration appeals is very limited.

“However, this does not stop creditors of Future Group to start enforcing their claims, which could plunge the company into further serious financial distress,” Namita Matthews, partner at Bengaluru-based law firm Algo Legal, told Inc42.

With the launch of its online store JioMart earlier this year, Reliance Retail entered into direct competition with Amazon in the ecommerce sector.

Future Retail is India’s second-largest retail chain after Reliance Retail and has more than 1500 stores across 437 Indian cities and towns covering an area of 16 Mn square feet. It is the parent of brands like Big Bazaar, Fashion Big Bazaar, HomeTown, Food Bazaar, and others. Big Bazaar reportedly contributes about 80% to Future Retail’s revenue. Comparatively, Reliance Retail operates in nearly 12K stores across 6,600 towns and cities, covering an area of 28.7 Mn square feet.

If Reliance Retail acquires Future’s retail business, it would become the de facto leader of India’s estimated $1 Tn consumer retail market, a position Amazon would not willing be to concede without a fight.