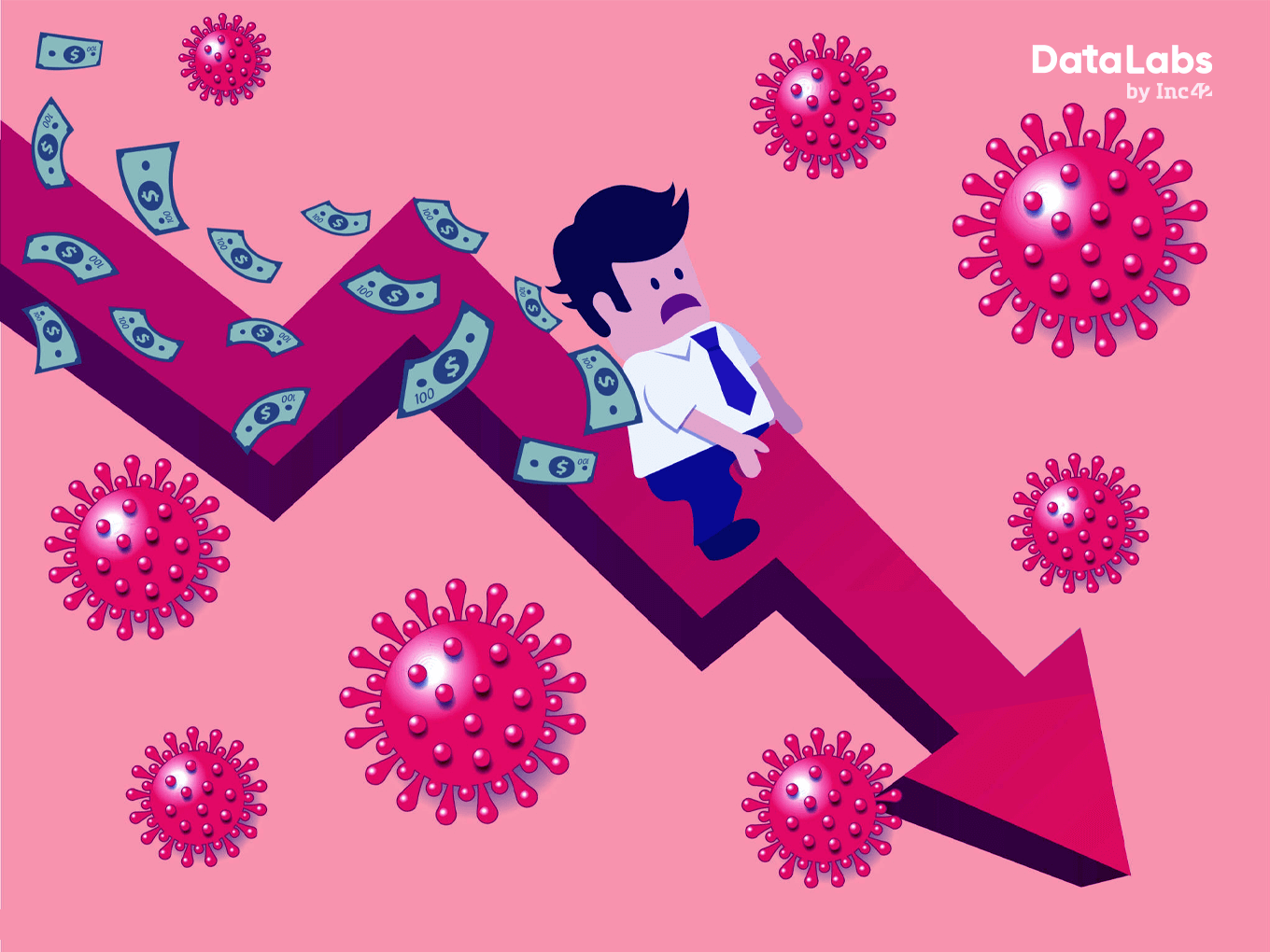 How bright is the future for Indian startups and VCs in 2020?

The start of a new year fills most with hope to take on the many challenges through the year and while the start of 2020 (and the new decade) — at least the first two months — was no different for the Indian startup ecosystem, the months that followed must have exhausted all that hope.

Exuberance and optimism were flourishing among the various stakeholders ranging from founders to venture capitalists in January and much of February, before the coronavirus pandemic dashed all hopes and made a dent in the world economy so deep that today the top economies in the world are in a recessionary phase.

The inflow of mega funding rounds such as OYO ($807 Mn), ReNew Power ($450 Mn), FirstCry ($296 Mn) and others uplifted the overall value of capital inflow in Q1 2020 compared to the previous quarter, indicating that the macro outlook of the first quarter remained largely un-impacted by the Covid-19 outbreak, but when you look at the capital inflow without the outlier funding (which are the high ticket investments) the total funding raised by Indian startups in Q1 2020 ($3.3 Bn) plunged by 10% compared to the previous quarters — $3.69 Bn.

This was a sign of things to come. The outbreak of Covid-19 pushed India into a stringent lockdown which resulted in the depletion of overall business confidence not only in startups but the economy as a whole. Between February and March 2020, the purchasing manager index (PMI) manufacturing an important economic indicator to determine overall business confidence, plunged from 54.5 (February 2020) to 51.8 (March 2020), furthermore in April 2020, the index shed 23.4 points tumbling down to 27.4, the sharpest deterioration since the data collection began over 15 years ago. Similarly, the PMI for the service sector tumbled to 5.4 in April 2020 from 49.3 in the previous month, well below the market expectations of 40.0.

However, given the flexibility which technology-enabled businesses enjoy, the resilience of some new-age sectors such as hyperlocal ecommerce, edtech, online gaming and digital media managed to carve out some growth. But the question remains will this be enough to facilitate commensurate growth in investor confidence in the coming quarters, which is crucial for the economy as a whole? 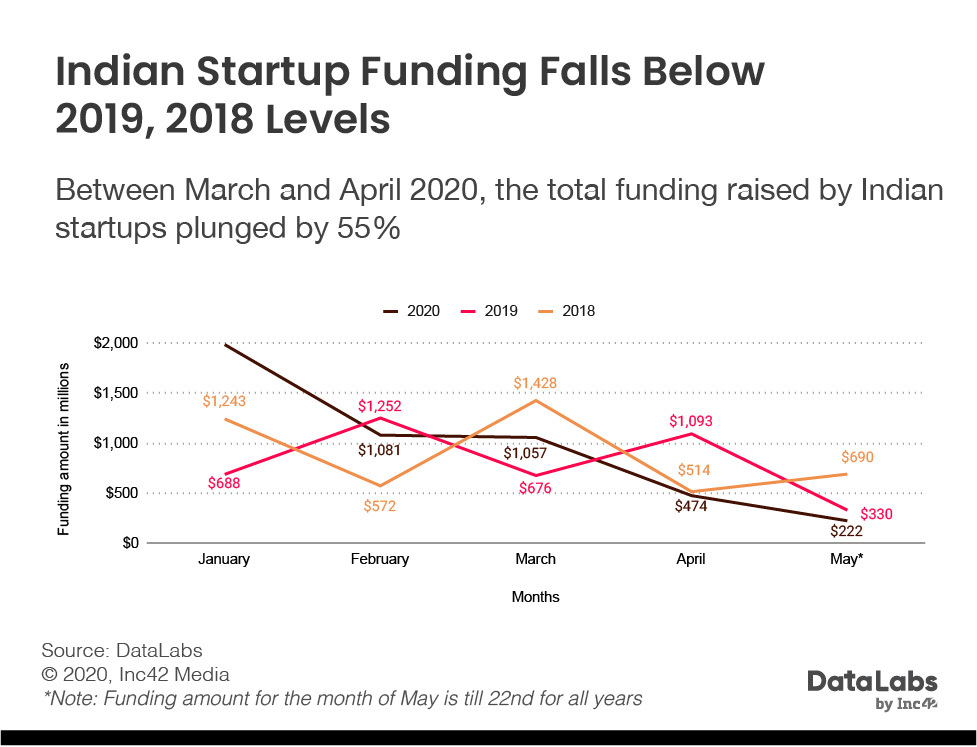 The total funding raised by Indian startups saw a massive dip between March and April 2020. The total capital inflow plunged by a whopping 55% from $1.05 Bn in March to just $474 Mn in April and $222 Mn in May. On the contrary, if we look at the investments during the same period in 2019, the funding in March and April had witnessed a surge of 62%. The primary reason for drop in funding activity in 2020 has been the decline of VC conversations with startups which have more or less froze after the travel restrictions since mid-March. In addition to this, the negative reaction to the lockdown by the country’s stock market further depleted the investor sentiments towards the economy.

The cash crunch was not only felt by the Indian startups but the Indian registered AIFs (alternative investment funds) also faced hostility from their limited partners for future infusion of cash. 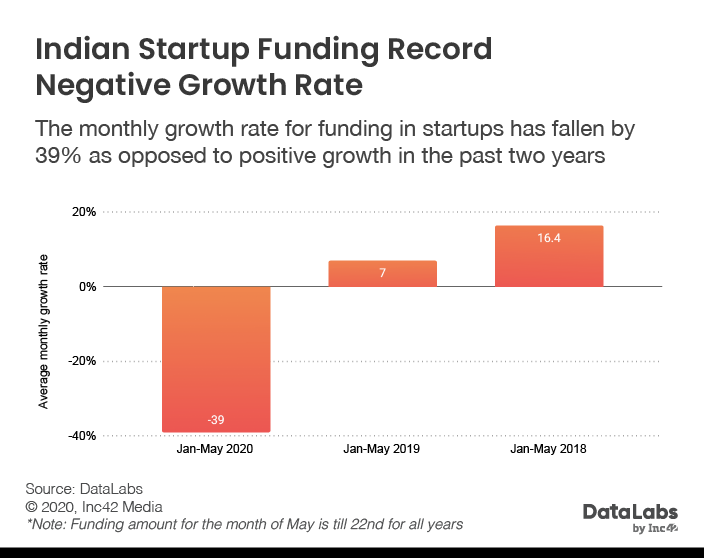 The average monthly growth rate of capital inflow in Indian startups was a staggering -39%. The negative rate indicates that the chances of a possible bounce-back are very bleak in the short term and one can only hope for a revival after the next two quarters (i.e. in Q4 FY 2020-21).

The Sectors Rising Despite The Pandemic

The change in consumer consumption behaviour in the new normal gave a boost to a handful of sectors, which include fintech, edtech, enterprise tech, consumer services and healthtech. The total value of capital inflow in these sectors was — fintech ($469 Mn), edtech ($444.6 Mn), enterprise tech ($619 Mn), consumer services ($573 Mn) and healthtech ($338.6 Mn). In the context of funding, these five sectors combined made $2.4 Bn (or 51% of the total $4.8 Bn).

In the fintech sector lending tech startups bagged the highest amount of funding — $285 Mn across 20 funding deals, followed by insurance tech and payments startups which bagged $84 Mn and $62 Mn respectively. Insurance being a highly regulated sector only witnessed big ticket size funding rounds in selected startups like Digit and Riskcovry whereas the payments landscape was dominated by the likes of Juspay, Dot, Recko and others. 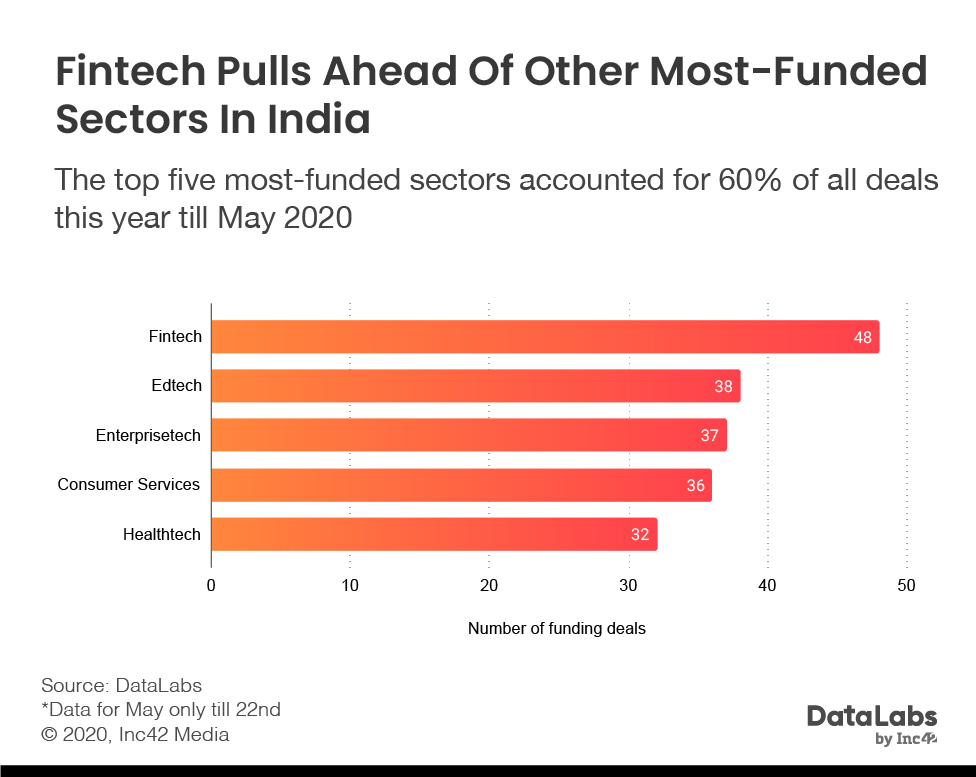 One important thing to notice in the payments sub sector is that mass targeted products like payment gateways, PoS machines, mobile wallets etc. are becoming a thing of the past, the wave of payments 2.0 is primarily driven by niche targeted products like Dot (offline to online fintech facilitator), recko (AI enabled reconciliation management system), Fampay (a teenager focused payments card service).

The overall funding scenario does give us an idea of the startup sectors which are witnessing the increased investor confidence during the pandemic but fails to determine which sectors can be considered best suited for new venture opportunities.

Compared to growth and late-stage investments, seed stage investment has a higher degree of risk associated with it. This is due to the fact that the entity under consideration does not have much financial history also at times they are operating in a segment which is at a very nascent stage in the domestic market.

The increased cash crunch in the ecosystem has made it relatively harder for new businesses which require higher capital expenditure to raise funds. Also, at this time investors are expected to fund niche segments of startups in established sectors which are flourishing in the new normal rather than the disruptive ones which are not aligned with the new normal. Comparing the top overall sectors and the same at seed stage we can observe that edtech and consumer services has been replaced by deeptech and media and entertainment.

In the context of edtech, the market saturation in two biggest subsectors — test preparation and online certification, due to the existence of big names such as BYJUs, Upgrad, Unacademy etc. has limited the scope for new venture opportunities in this segment.

On the other hand, in the case of consumer services which is widely dominated by hyperlocal and CPG (consumer packaged goods), high capital and operational costs clubbed with the widespread presence of established players has narrowed the opportunity for new entrants.

In the fintech seed stage ecosystem, apart from the lending tech and payments startups another sector which is picking up is the neo-banking segment. Although the neo-banking in India is largely focused on being an tech enabler to existing banking institutions, unlike Europe where neobanks like Revolut, N26 and others are a digital only bank themselves.

The neobanking segment is becoming the new hot cake within fintech, in addition to new ventures established fintech companies are also keen on venturing into this segment. While India already has neobanking startups and companies, things are still at an early stage from the regulatory point of view, the bandwagon of players is still emerging from the depths of the market. And with customer needs evolving, neobanking models are also being tailored to suit the needs of the pockets of markets where they operate. The list includes Open, Namaste Credit, NiYO, SBI YONO, Kotak 811, Hylo, PayZello, InstaDApp, 0.5Bn FinHealth (YeLo), Forex-Kart, Walrus, Neo-Bank, Fin.in, RazorPay X among others.

For example, Razorpay, a online payment solution provider, is exploring the neo banking market in India through RazorpayX which is focused on B2B consumers and is already witnessing significant traction. Razorpay CEO & Cofounder Harshil Mathur claimed that since inception, RazorpayX has hit an annualised total payment volume of $3 Bn and the neobanking platform has grown by 20x in the last 6 months. While most of the emerging neobanks are focussed on customers, there are very few developing banking solutions for businesses, Mathur added.

Overall, the future of any business ecosystem including the startups is heavily dependent on how efficiently the infection is contained. The macro outlook of the Indian economy for the coming quarters does not look very promising, the latest provisional estimates for the annual GDP growth for the current year (2019-20) by MOSPI is 4.2% lower than the previous years (2018-19) 6.2% indicating how much the pandemic has impacted the overall business in the country. When the impact of lower economic growth clubbed with underperforming public markets trickles down to the startup ecosystem only startups with higher EBITDA and positive economies of scale will be able to sustain through the recession.

For startups, the biggest concern is indeed funding and the down rounds that usually come with times where survival is the bigger priority than valuation. Not only has valuation gone down for many startups but they have also witnessed a sharp decline in their valuation-dependent market indicators too. This could perpetuate the cycle of slow funding growth and layoffs that many startups are caught in.